The final PIX11/NewsNation/Emerson College poll of the New York City Democratic mayoral primary finds Brooklyn Borough President Eric Adams with 23% of the vote holding a five-point lead over the rest of the field. Former City Hall counsel Maya Wiley and Former NYC Sanitation Commissioner Kathryn Garcia are battling for second, at 18% and 17%, respectively. Entrepreneur Andrew Yang is close behind at 14%, NYC Comptroller Scott Stringer is at 9%, with no other candidate above 3%. Ten percent (10%) of the electorate is still undecided with less than one week before election day. 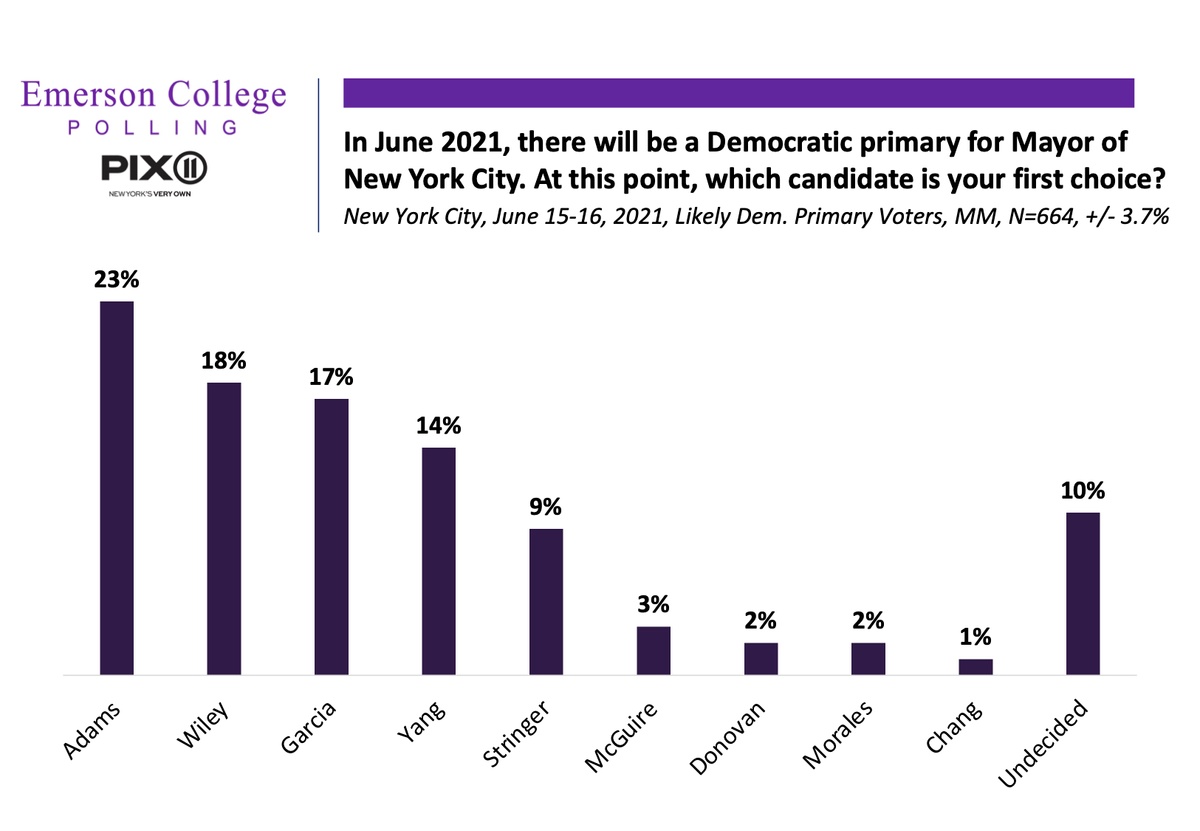 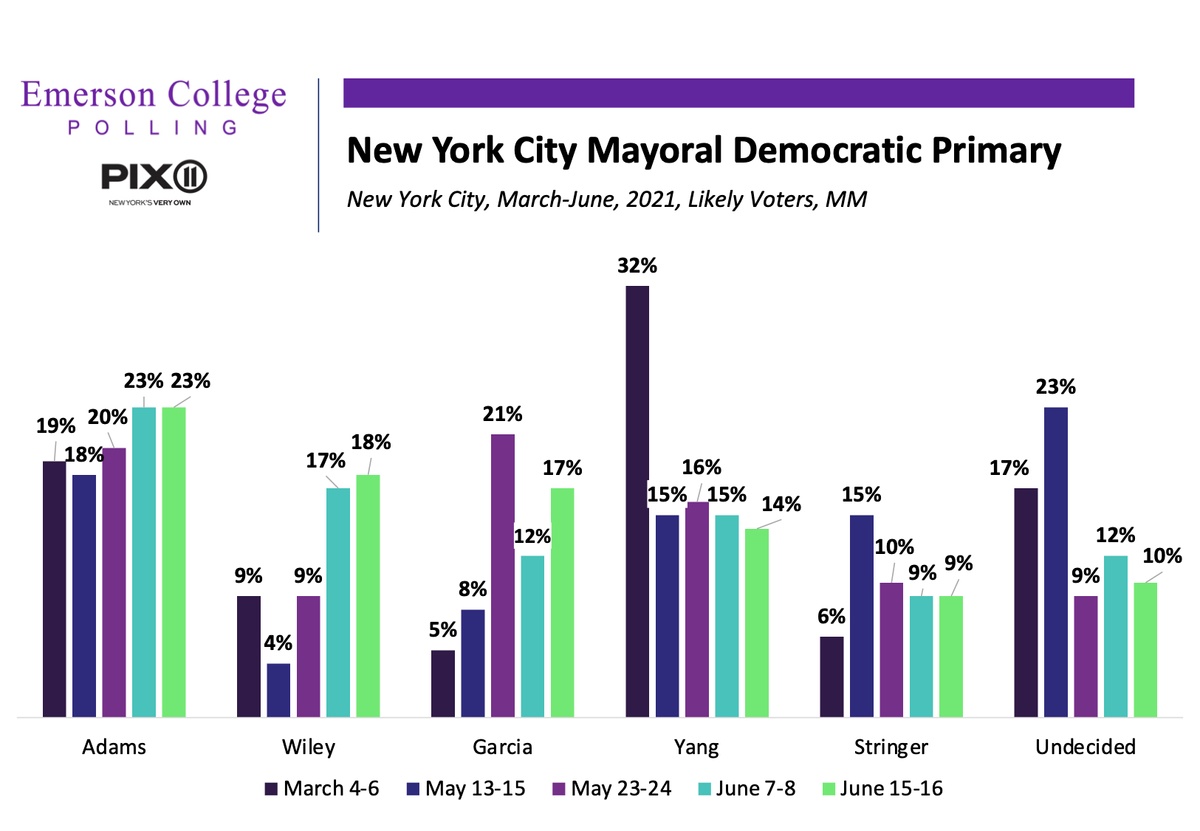 Respondents also were asked regardless of who they are supporting for Mayor, which candidate they expect to win the Democratic primary. A plurality (45%) believe Adams will win, 14% say Garcia, 12% say Yang, and 9% say Wiley.

Regarding controversy about Eric Adams’s primary residence, a majority (51%) of Democratic primary voters say it makes no difference on their voting decision, while 32% indicate it makes them less likely to vote for Adams, while 17% say it makes them more likely.

Spencer Kimball, Director of Emerson College Polling remarked “the residence issue seems to be keeping Adams from extending his lead, while Wiley and Garcia are pulling from a similar group of voters. Yang and Stringer have dropped as top contenders, but still hold strong bases of support. Morales, who was a top 5 candidate at one point, has dropped out of contention.” Kimball also pointed out that “there is still a large number of undecided voters who could swing the election. Ranked choice voting looks to be more beneficial for Wiley and Garcia than for Adams, which could change the eventual outcome.” 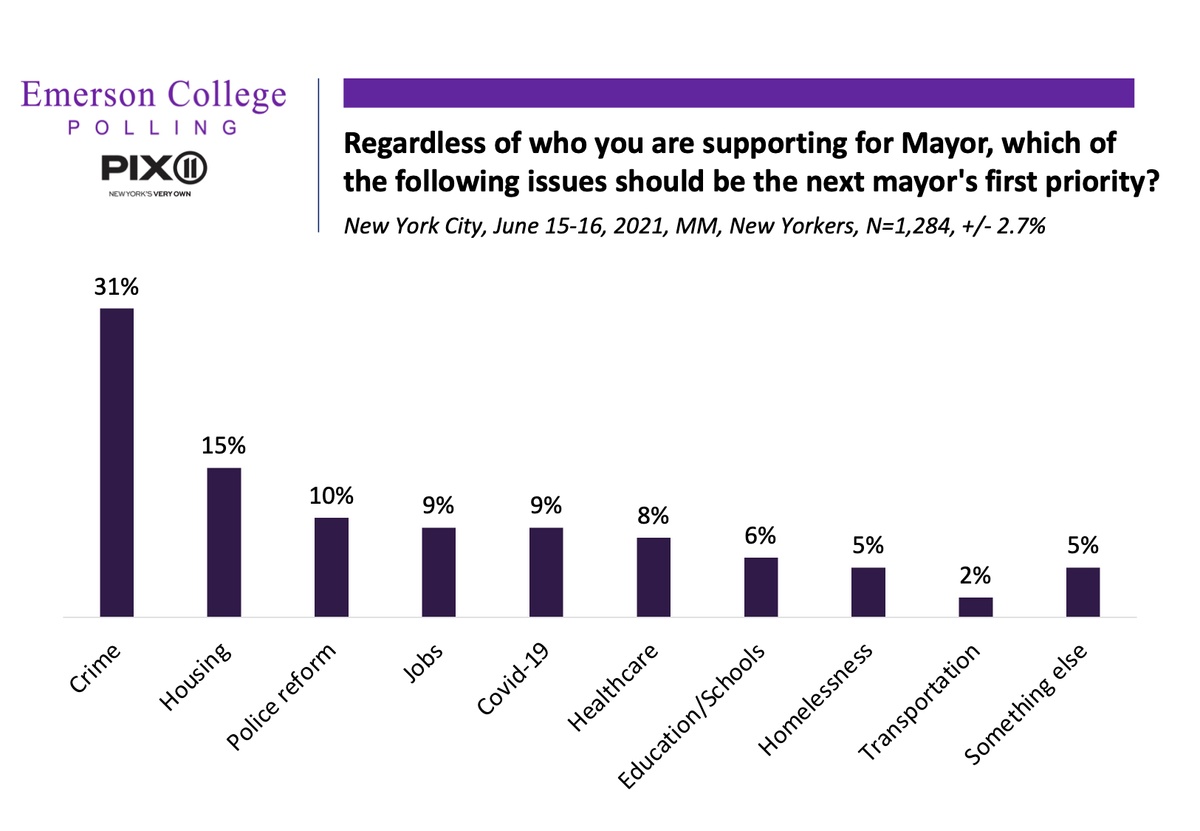 Democratic primary voters were asked to rank up to five candidates in order of preference, to reflect NYC’s new ranked-choice-voting system. While Adams maintains his lead throughout, winning in the final round by 4 percentage points, the battle for who will contest him in the final round is close: Wiley, who maintains second place up until the end of round 8, is edged out by Garcia in Round 9 by only 0.8 percentage points, after Yang’s voters are allocated.

Adams benefits largely from Yang voters, as 37% rank him as their second choice, and 56% of Yang’s reallocated voters go to Adams after round 8.

Garcia benefits most from the Wiley voters that were reallocated after round 9, as they break for Garcia at nearly a 2:1 ratio, with 69% going to Garcia, and 31% going to Adams. 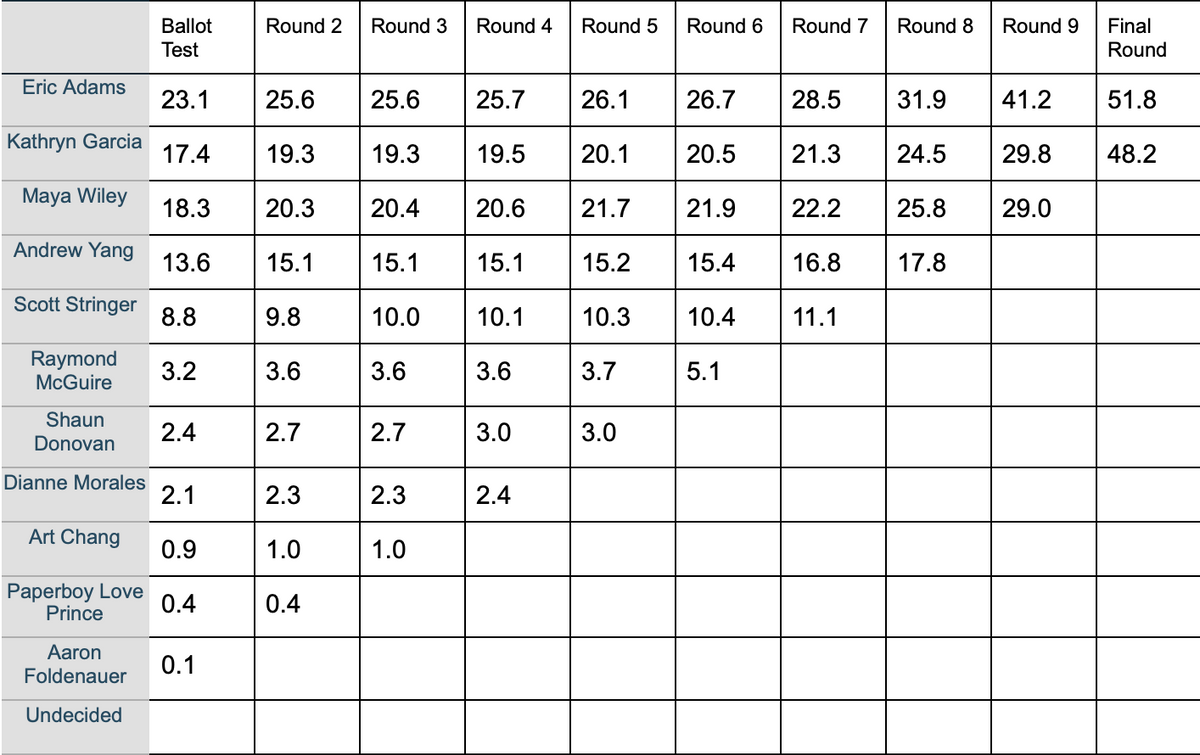 The PIX11/Emerson College NYC Mayoral poll was conducted June 15-16 2021. The sample consisted of New York City registered voters, n=1,284 with a Credibility Interval (CI) similar to a poll’s margin of error (MOE) of +/- 2.7 percentage points. The data sets were weighted by borough, age, education, race, and party registration based on a 2021 turnout model. It is important to remember that subsets based on gender, age, party breakdown, ethnicity, and region carry with them higher margins of error, as the sample size is reduced. Data was collected using a cellphone sample of SMS-to-web, a landline sample using IVR, and an online panel. 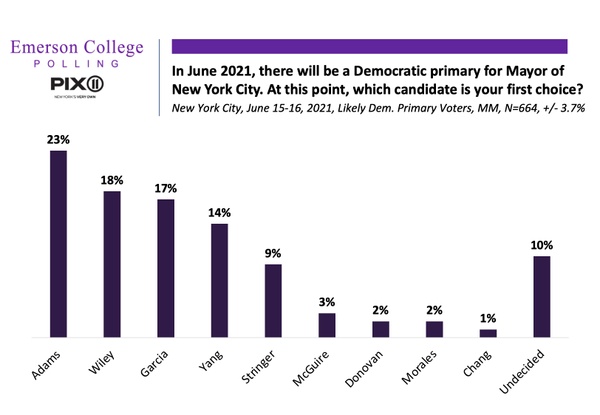 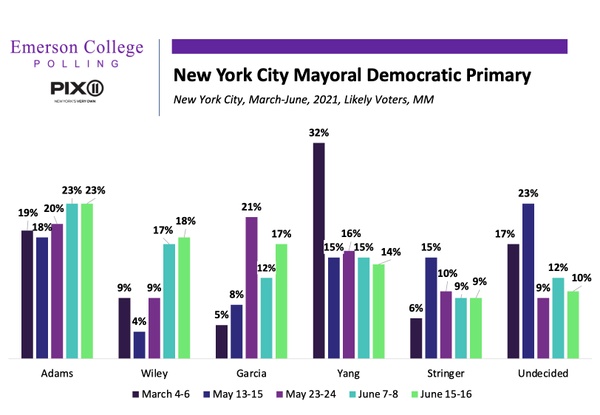 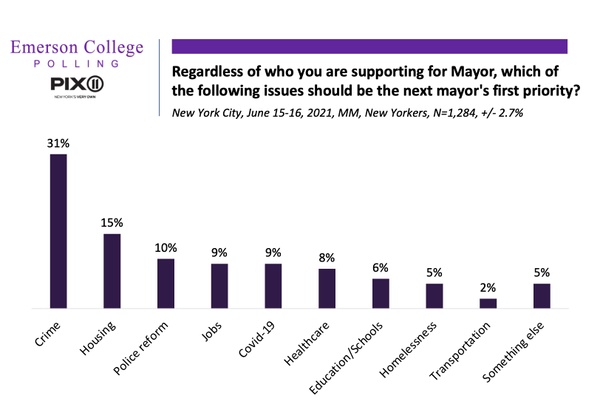