In the first WPIX-TV/NewsNation/Emerson College poll of the New York City mayoral race, entrepreneur Andrew Yang leads the crowded Democratic primary with support from 32% of likely Democratic voters. Rounding out the top five candidates at this stage in the race are Brooklyn Borough President Eric Adams at 19%, followed by former counsel to Mayor de Blasio Maya Wiley at 9%, NYC Comptroller Scott Stringer at 6%, and Former NYC Department of Sanitation Commissioner Kathryn Garcia at 5%. All other candidates polled under 5%, and 17% of respondents answered someone else (n=644, +/-3.8%). 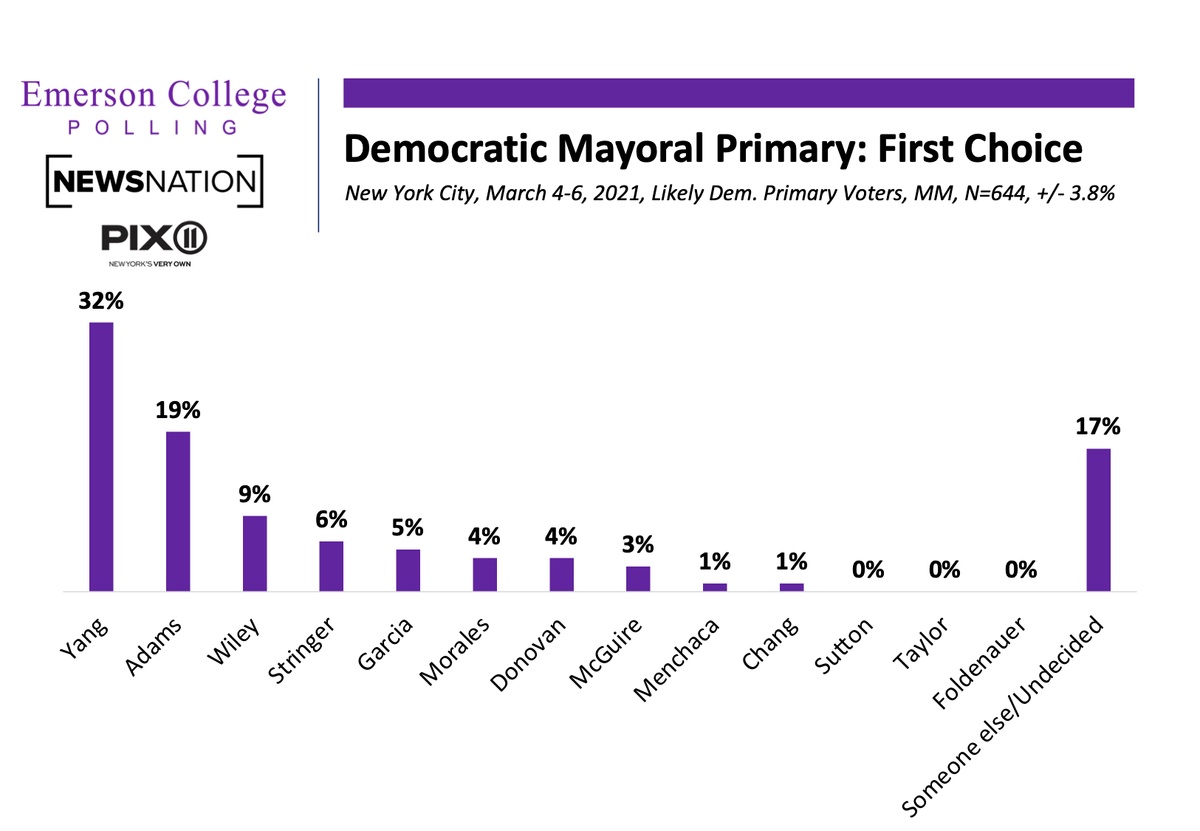 Adams ranks highest among voters’ second-choice candidates, at 11%, followed by Yang at 9%, and Stringer at 8%. Twenty-nine percent (29%) of voters indicated that they would not rank any candidate as their second choice at this time. 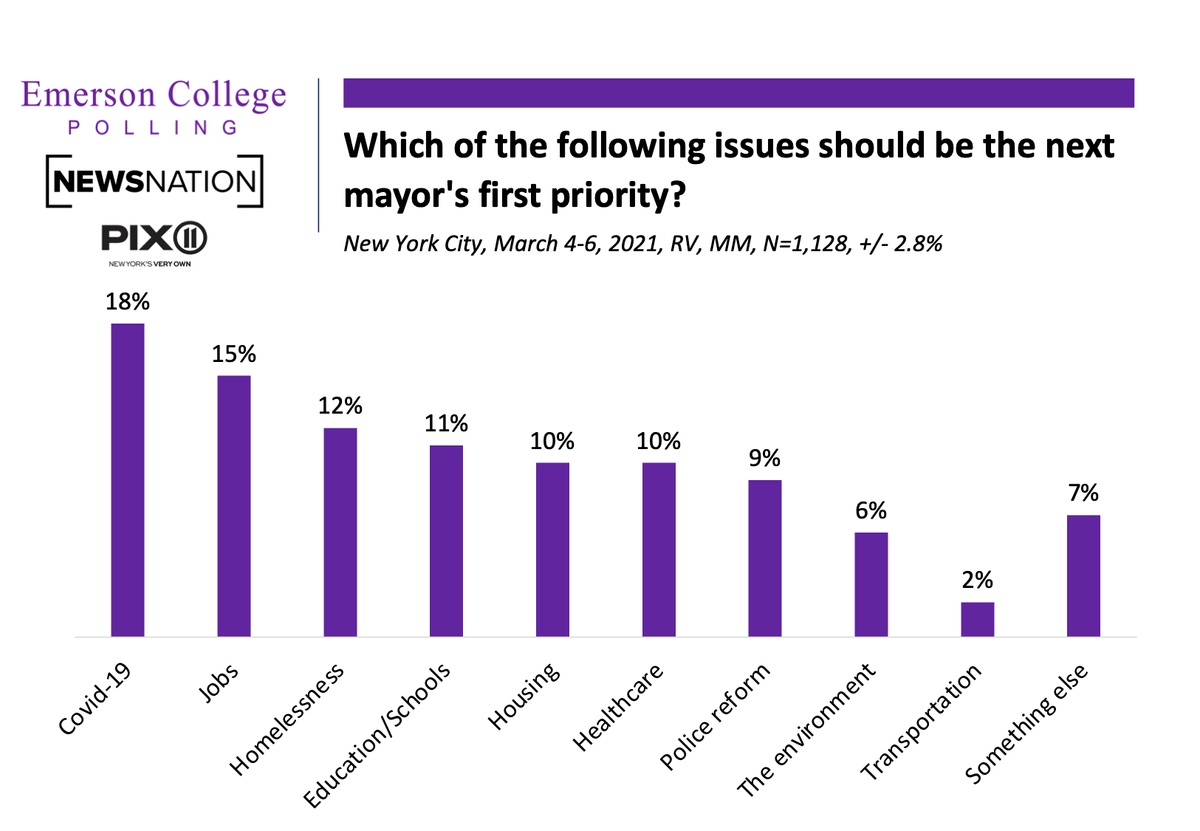 Voters are confident that the upcoming NYC mayoral election will be conducted fairly by the Board of Elections, with 48% very confident, and 35% somewhat confident. Twelve percent (12%) of voters are not too confident, and 5% are not at all confident in the BOE.

A majority of voters (62%) believe that it is not important that the next mayor of New York City is a person of color, while 25% believe it is somewhat important, and 14% believe it is very important. 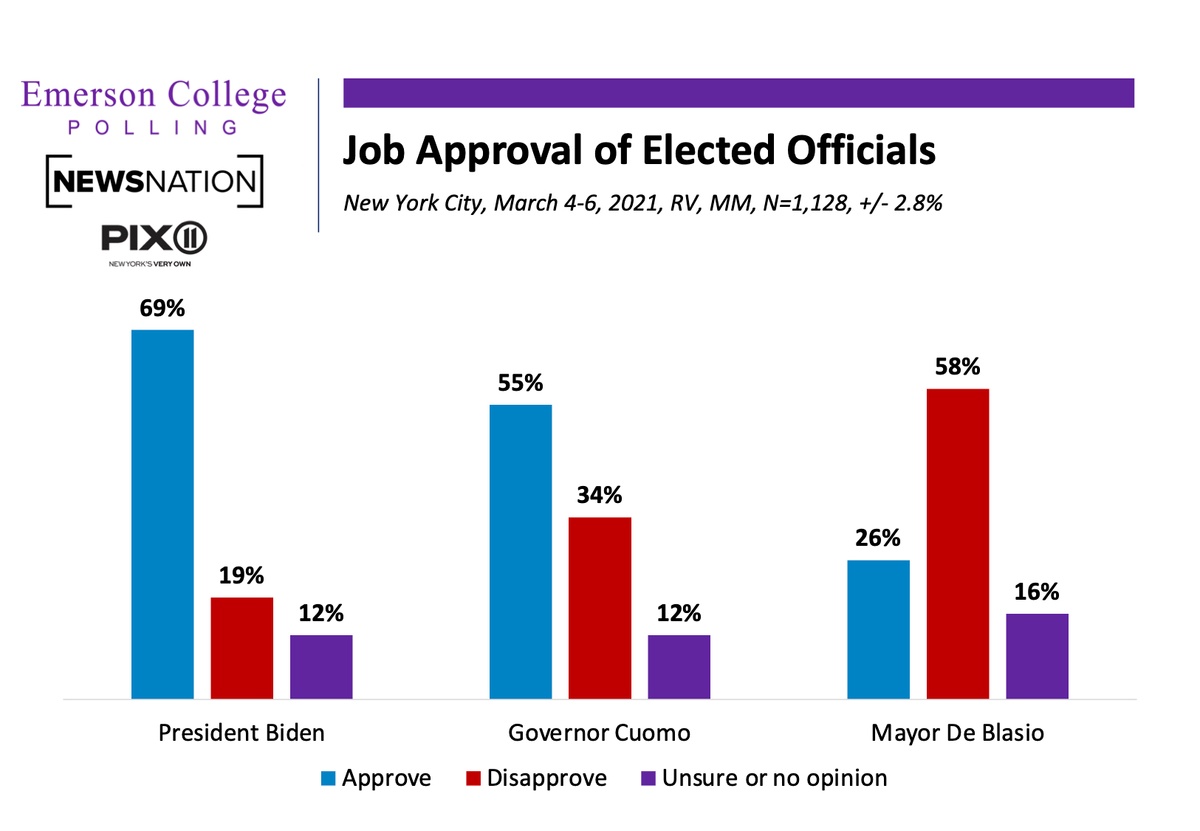 A majority (53%) of NYC voters plan to receive the Covid-19 vaccine as soon as it is available to them. Twenty-four percent (24%) say that they will receive the vaccine, but not immediately, while 12% say they will not get the vaccine. Eleven percent (11%) of respondents indicated that they have already been vaccinated.

Nearly half, 49% of voters identify as being very well informed about when they will be eligible to receive the vaccine; 34% report being somewhat informed, 12% said they were not very informed, and 6% reported not being informed at all.

More than a quarter (26%) of voters believe that if someone has contracted Covid-19, they are now vaccinated against the virus.

When asked if race and ethnicity are impacting who is first to get the vaccine, a majority of voters (54%) said it was not, while 46% believe that it is.

A plurality (46%) of NYC voters rate the quality of their area’s public transportation as good, while 26% say it is fair, 16% say it is poor, as compared to 13% who say it is excellent.

The New York City Emerson College/WPIX-TV/NewsNation poll was conducted March 4-6, 2021. The sample consisted of New York City registered voters, n=1,128, with a Credibility Interval (CI) similar to a poll’s margin of error (MOE) of +/- 2.8 percentage points. The data sets were weighted by gender, age, education, race, party affiliation, and region. It is important to remember that subsets based on gender, age, party breakdown, ethnicity, and region carry with them higher margins of error, as the sample size is reduced. Data was collected using SMS-to-web, and an online panel provided by CloudResearch. 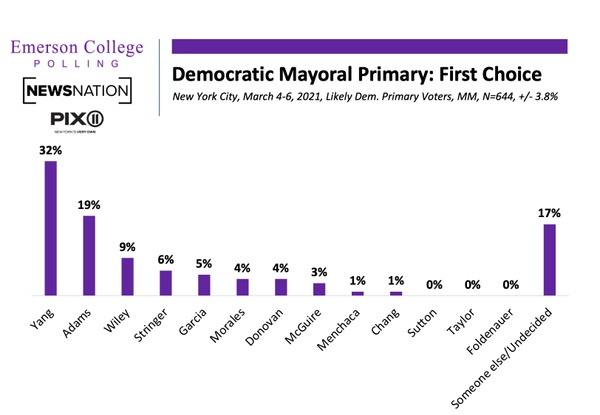 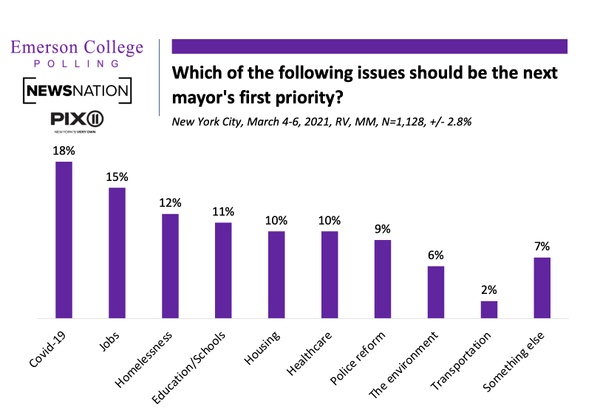 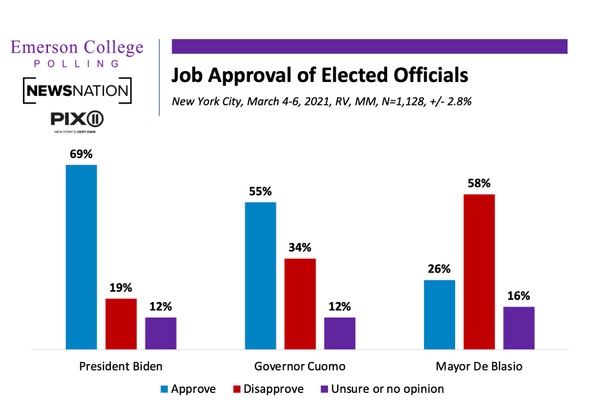