The fourth PIX11/NewsNation/Emerson College poll of the New York City Democratic mayoral primary finds Brooklyn Borough President Eric Adams back in the lead with 23%. However, the race continues to shift, with former counsel to Mayor de Blasio Maya Wiley jumping up to second place with 17%, an increase of 8 percentage points since the May 25 poll. Entrepreneur Andrew Yang maintains third place, with 15%, while former commissioner for the NYC Sanitation Department Kathryn Garcia dropped from 21% to 12%. New York City Comptroller Scott Stringer rounded out the top 5 with 9%. Nonprofit executive Dianne Morales dropped from 7% to 2%. All other candidates polled below 4%, and 12% are undecided. 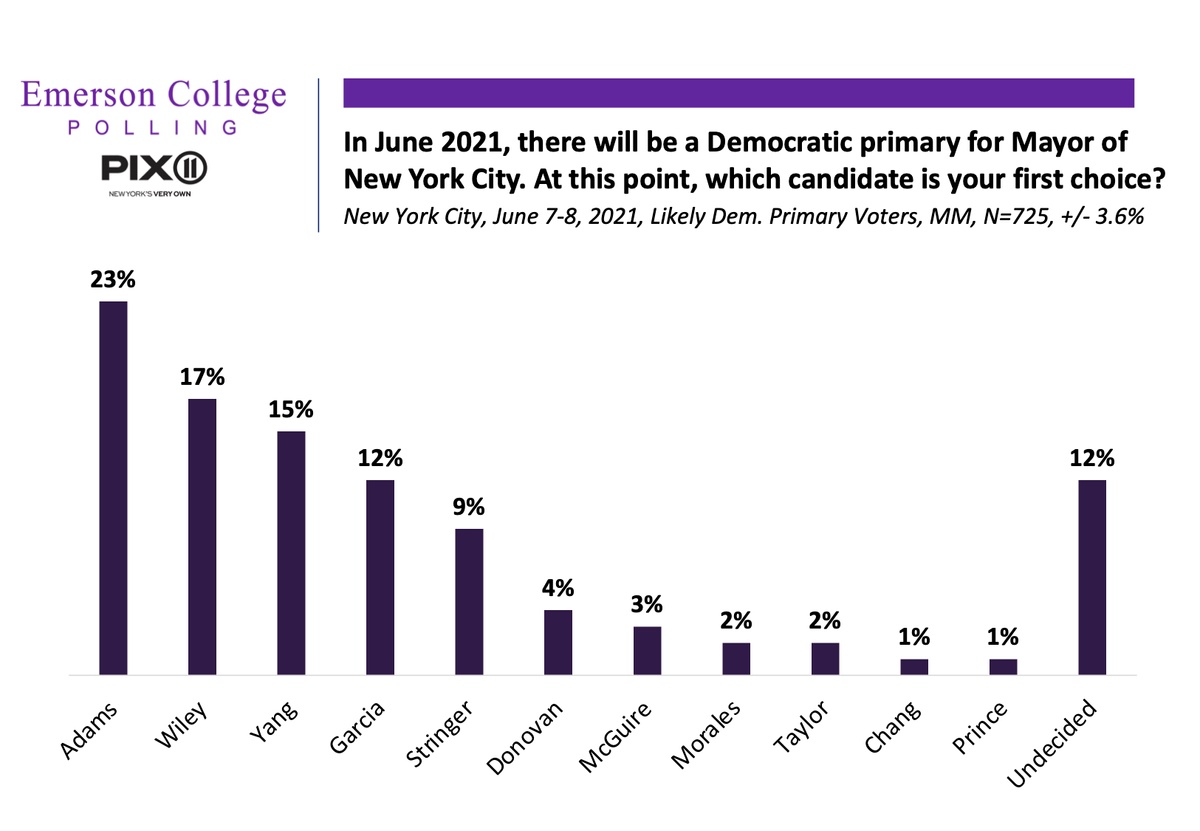 This latest PIX11/NewsNation/Emerson College poll finds Adams building his base of support week to week, going from 20% to 23%. Throughout the 4 polls, Adams’s support is most consistent. Driving this support for Adams could be the increased priority on crime among New York City voters. 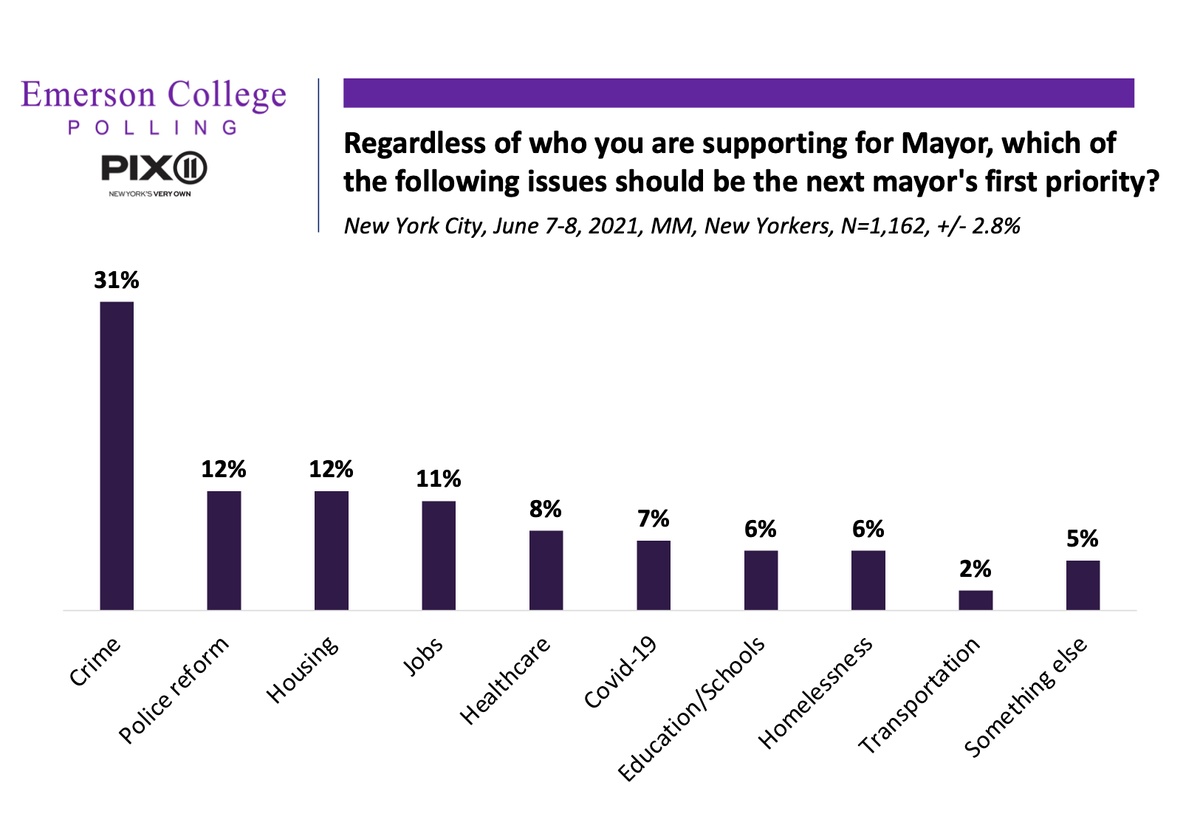 Crime remains the number one issue at 31%, up eleven points from the last poll. Additionally, when asked in a separate question which candidate would be best at handling crime, Adams ranked first at 40%; no other candidate was above 9%. 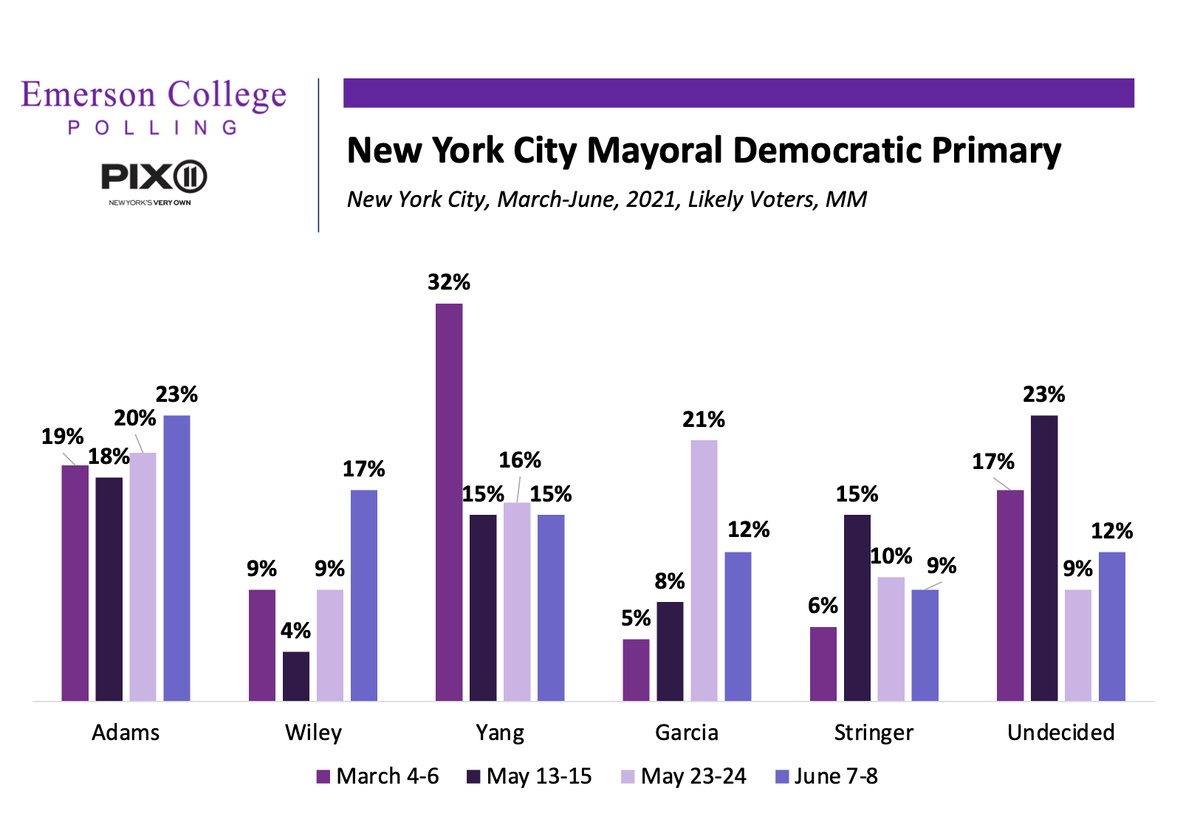 AOC’s endorsement of Maya Wiley was a game changer, as Wiley had not passed 9% in earlier polls, and now is in second place at 17%. Regarding the endorsement, 29% of voters said they were now more likely to vote for Wiley due to the AOC endorsement, while 29% said they were less likely, and 42% said it made no difference.

Spencer Kimball, Director of Emerson College Polling said “while the AOC endorsement helped Wiley increase her support, it appears to have come to the detriment of Garcia and Morales. However, the AOC endorsement has not affected the leader of the race, Adams, who has extended his support with two weeks until the election.”

Yang continues to hold strong support with voters under 45, getting 23% of the vote, but struggles with older voters at only 9% support. Yang has plateaued around 15% over the last 3 polls, which suggests his base is sticking with him, but has been unable to capture the 30% he was at earlier in the race when he was leading.

Stringer has dropped back after a second sexual misconduct scandal, with 9% of the vote, down from the 15% he held in early May. When voters were asked about the impact the allegations had on their vote, 44% said they were less likely to vote for him, 12% were more likely, and 44% said it made no difference.

Voters were asked to rank up to five candidates in order of preference, to reflect NYC’s new rank-choice-voting system. Falling into the pattern seen in the previous NYC polling, the candidate with the initial lead wins the majority. In this poll, Adams defeats Wiley 58.5% to 41.5% in the final round when the ranked choices are allocated. 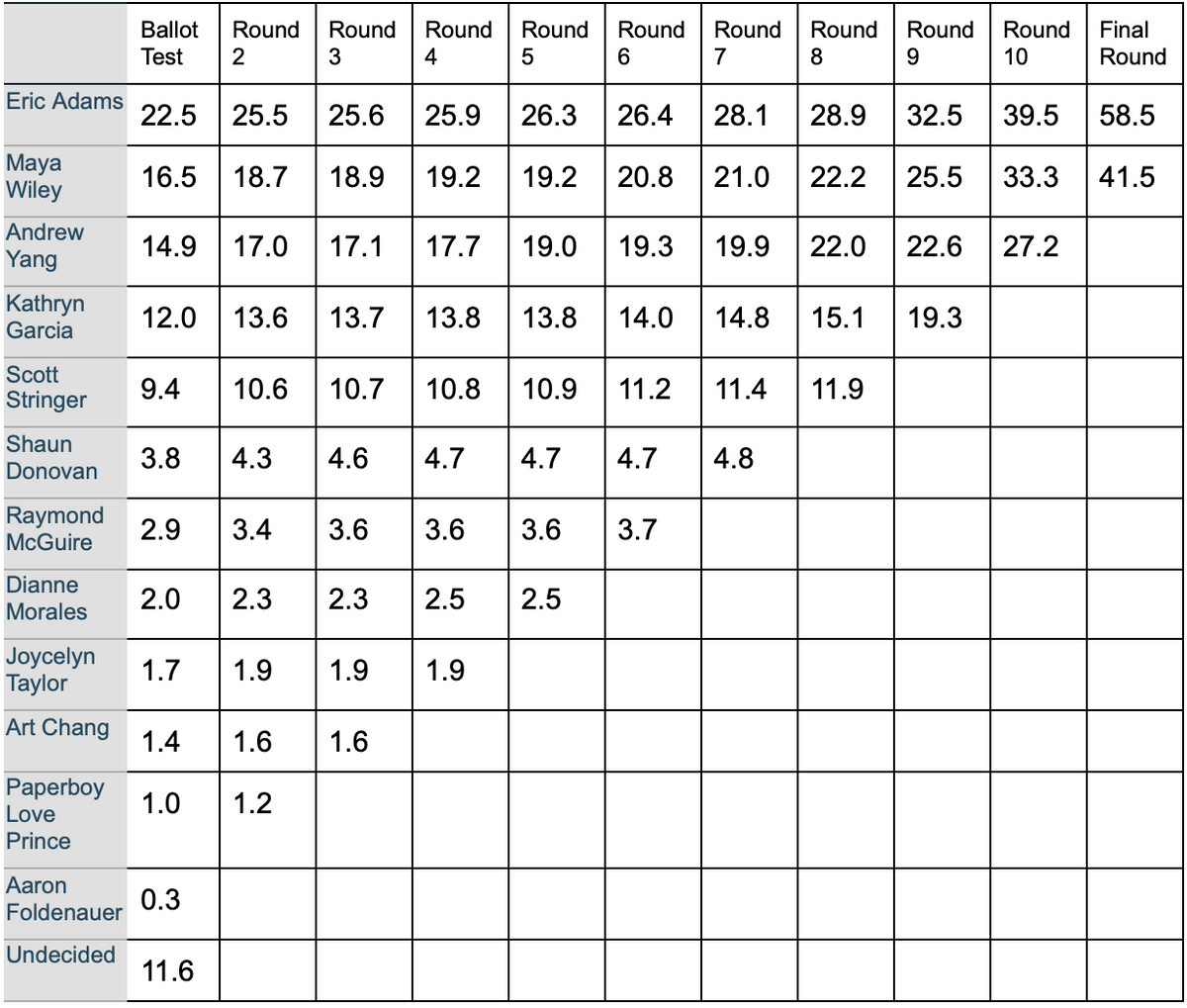 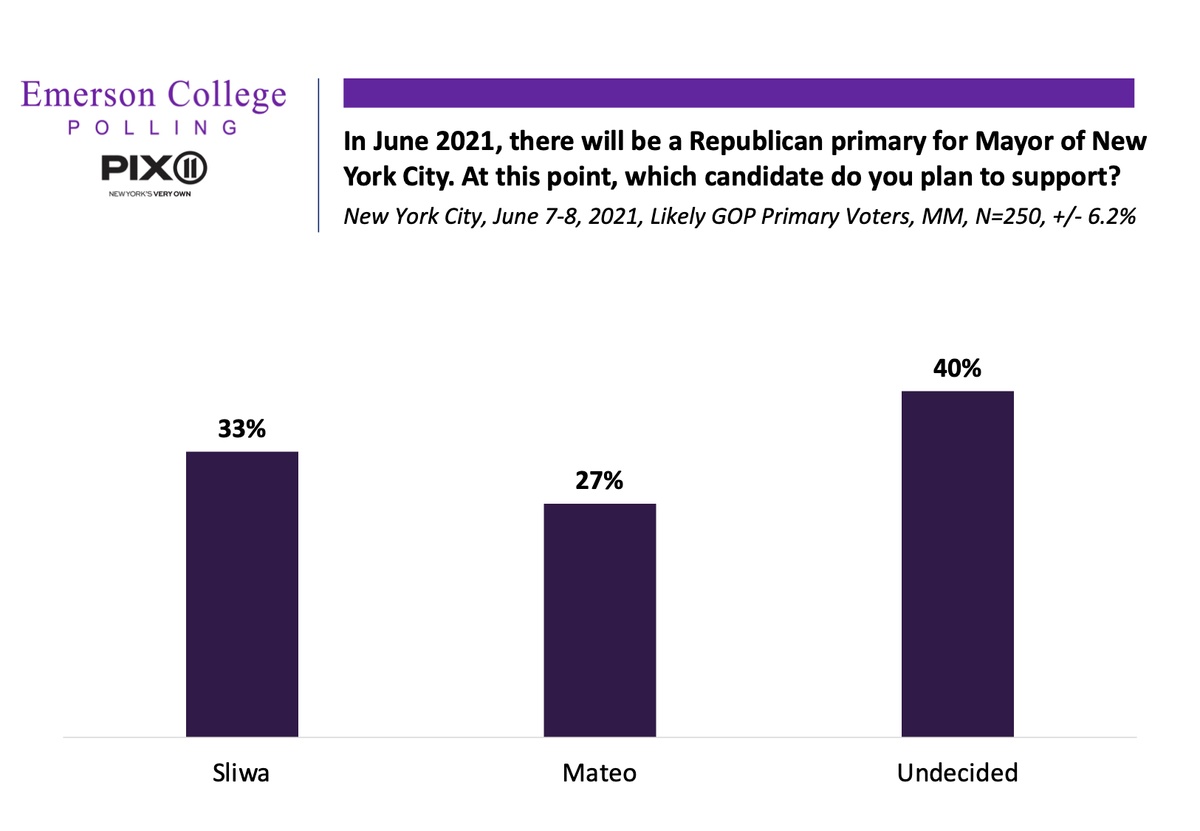 The PIX11/Emerson College NYC Mayoral poll was conducted June 7 and 8, 2021. The sample consisted of New York City registered voters, n=1,162 with a Credibility Interval (CI) similar to a poll’s margin of error (MOE) of +/- 2.8 percentage points. The data sets were weighted by borough, age, education, race, and party registration based on a 2021 turnout model. It is important to remember that subsets based on gender, age, party breakdown, ethnicity, and region carry with them higher margins of error, as the sample size is reduced. Data was collected using a cellphone sample of SMS-to-web, a landline sample using IVR, and an online panel. 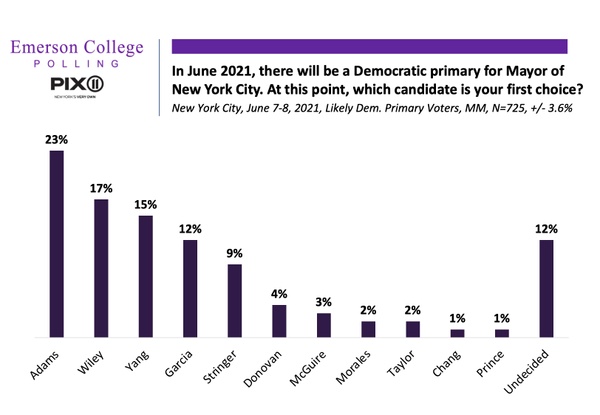 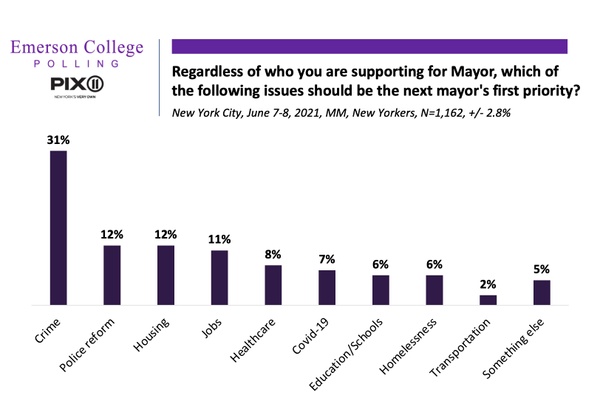 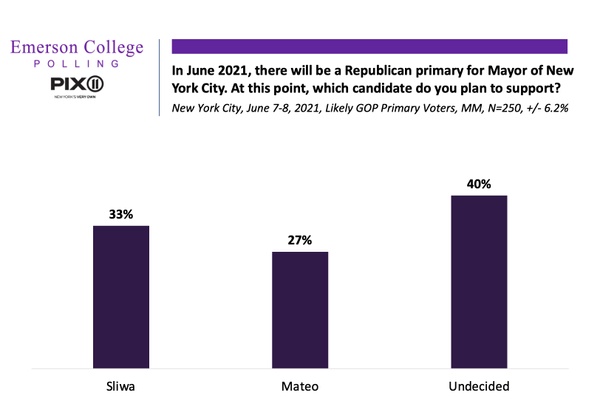 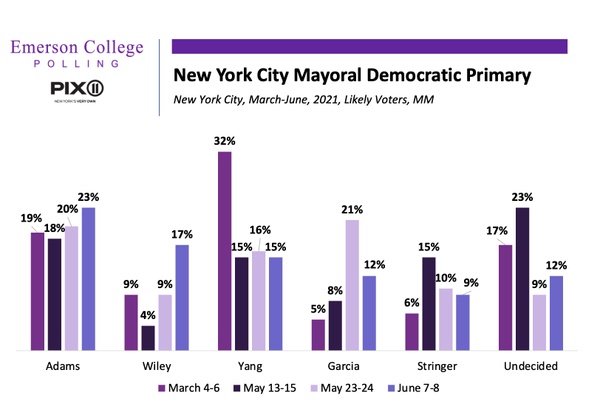