A new PIX11 News/ Emerson College poll of the Democratic primary race for Mayor of New York City finds Brooklyn Borough President Eric Adams leading the field at 18%. Entrepreneur Andrew Yang, who led March’s PIX11/Emerson poll, saw his support fall from 32% to 15%. New York City Comptroller Scott Stringer had the largest jump in support since March, going from 6% to 15%, and former commissioner for the NYC Sanitation Department Kathryn Garcia jumped from 5% to 8%. Twenty-three percent (23%) of voters reported being undecided. 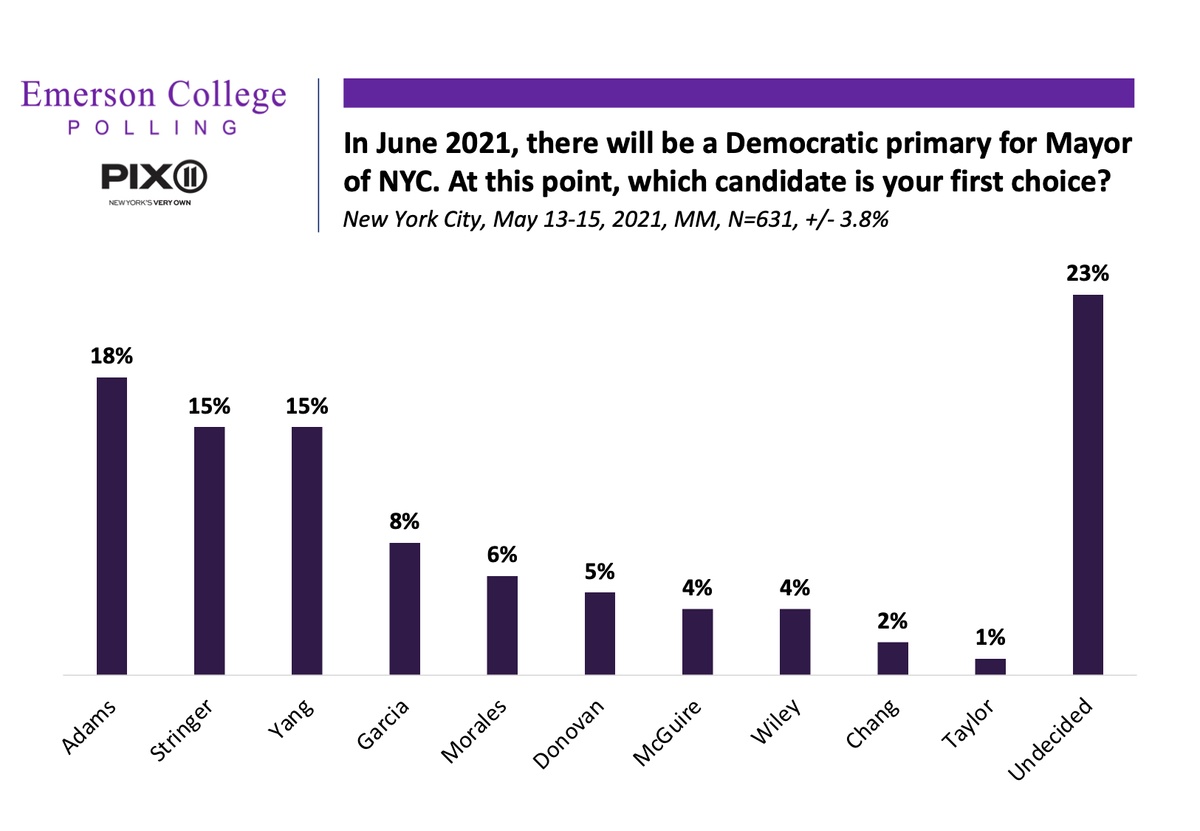 When voters were asked about the credibility of the allegations of sexual harassment against Stringer, 28% reported not having heard enough about it, another 28% said they were not credible, 18% said they were credible, and 27% were unsure.

The poll indicates that voters’ familiarity with rank choice voting (RCV) is increasing, as 39% said they heard a lot about RCV, compared to 26% in early March. The number of voters who had no knowledge of RCV dropped from 33% to 19%. A plurality of Democratic primary voters (42%) said they have heard a little about RCV.

This poll allowed voters to rank their top three candidates. The table below simulates voters who were allocated to their second or third choice if their top candidate was eliminated in the round. In the primary election in June, voters will be able to rank up to five candidates.

As reflected in the table, Adams is able to hold his lead throughout the rounds of voting with small increases along the way. Yang, Stringer, and Garcia are also able to hold their positions for each round. In round 4 of allocation, Donovan trailed Morales 6.5% to 8.4%. However, when McGuire was eliminated after the round, the allocation of his voters pushed Shaun Donovan over Dianne Morales in round 5, at 9% to 8.6%, eliminating Morales for round 6. After that round, it appears Kathryn Garcia was the beneficiary of Morales's voters' second and third rankings, picking up 5% of the vote.

If these numbers hold, it is possible that it will take many rounds to get a candidate to 50% of the vote. Using this poll to further illustrate the situation in the race, round 7 shows 4 candidates all within 10 points; when Garcia is eliminated, her 20.6% of the vote breaks closely in three ways, with 7.4% going to Stringer, 6.8% going to Yang and 6.3% going to Adams. Theoretically, this means that if Garcia supporters were to have broken just slightly stronger for Stringer by 1 point (8.4% to 5.8%), Yang would be knocked out in round 8 at 32.4% to 32%. 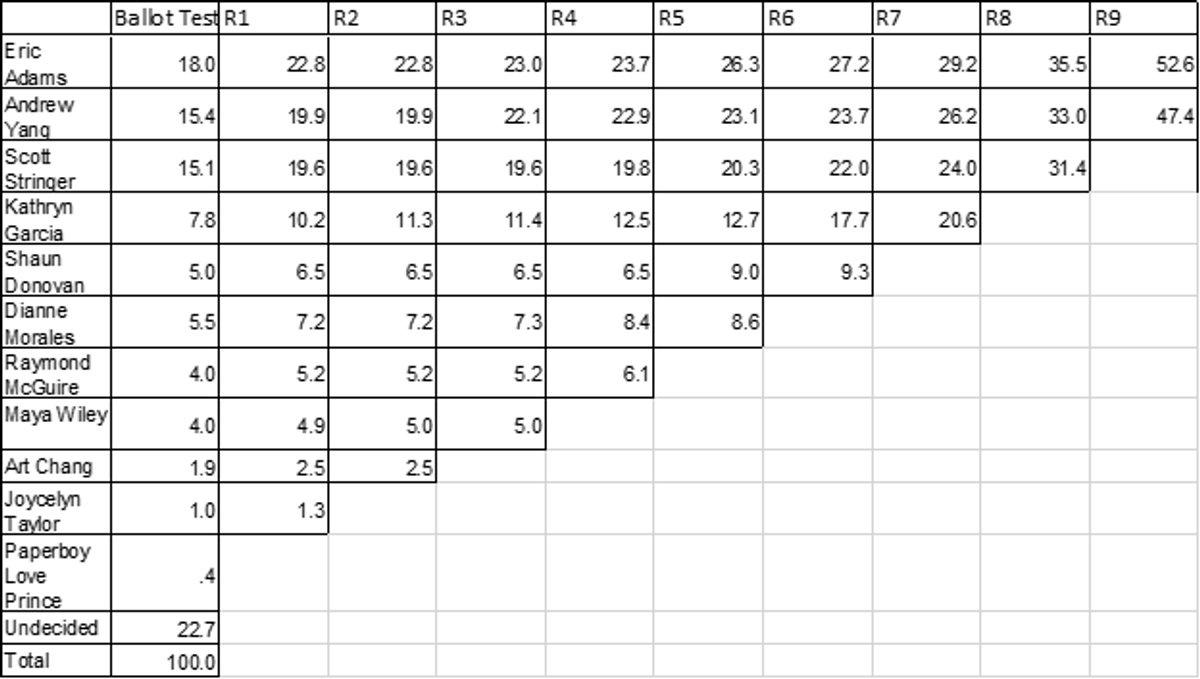 Voters appear to be coalescing around the issue of living arrangements, with 20% saying homelessness should be the first priority of the next mayor, and another 15% saying housing should be the first priority. These issues have risen in popularity since our March poll when 10% reported housing and 12% reported homelessness. Covid-19 dropped from the top issue at 18% in March, down to 9% today. Other top issues reported were jobs at 12%, healthcare at 11%, education/schools at 10%, and police reform at 9%. Among the 11% that said “something else” and wrote in an issue, a common answer was crime. 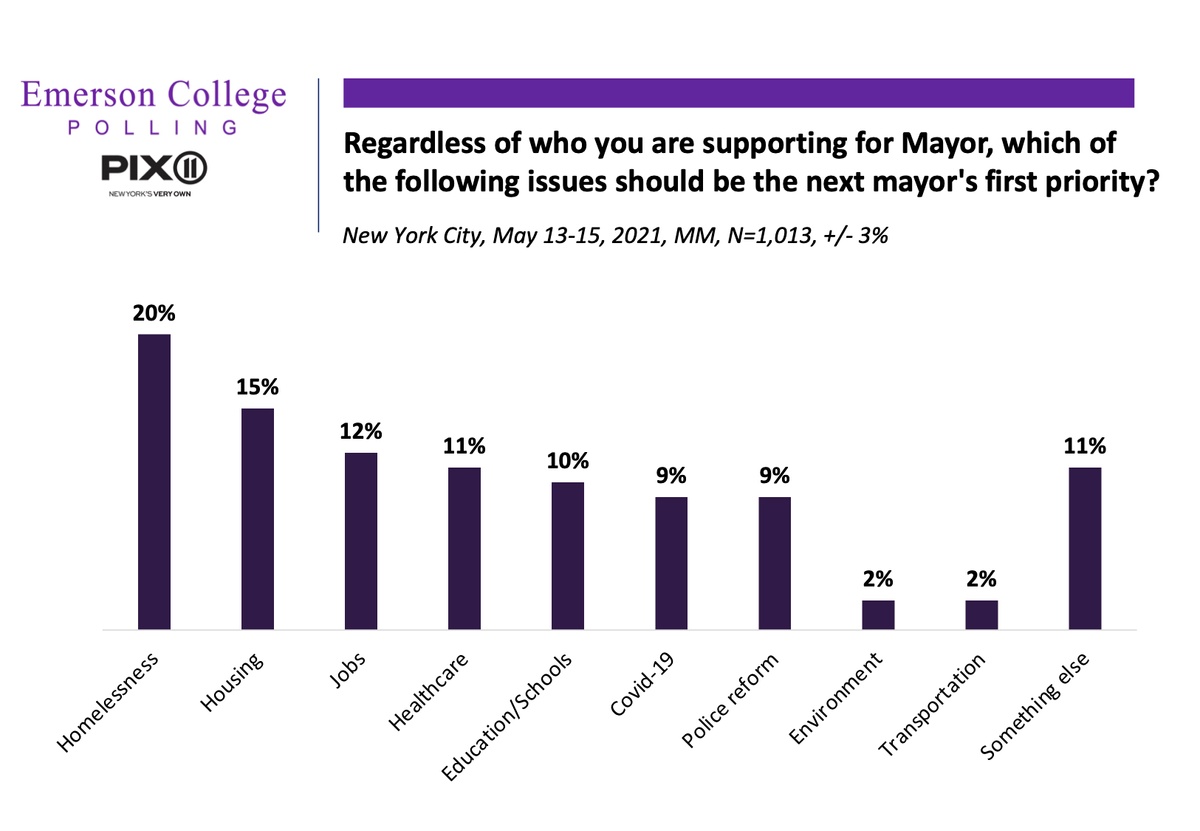 The perception of the quality of public transportation has dropped considerably over the last 2 months, with 43% reporting a “good” or “excellent” rating, as compared to 58% in March. The largest increase was in the people reporting ”fair”, which jumped from 26% to 42%. Those living in Staten Island and the Bronx were most likely to rate the quality of public transportation as “poor” compared to other boroughs, at 27% and 22%, respectively.

One of the major issues among those surveyed with the public transportation system in NYC is fear of being a victim of a crime; as a plurality (43%) reported being “very concerned” about this issue. A combined 79% report being either “somewhat” or “very concerned” about someone in their family or themselves being a victim of a crime, with only 4% saying they are “not at all concerned.”

Voters are split about additional funding for the MTA. A plurality (49%) of voters favor more funding, while 42% view funding as adequate, and 10% think less money should be spent on the MTA.

A majority (53%) of voters report having a “very positive” or “somewhat positive” view of the NYPD. Forty percent (40%) report holding a negative view, and 7% are unsure. This metric varies largely by race, with a combined 61% of white voters and 61% of Hispanic voters reporting a positive view of the NYPD, compared to only 33% of Black voters. Additionally, older voters are more inclined to view the NYPD positively, with 65% of those 45-64 and 60% of those 65 and older viewing the NYPD positively, compared to only 46% of those 30-44 and 36% of those 18-29. 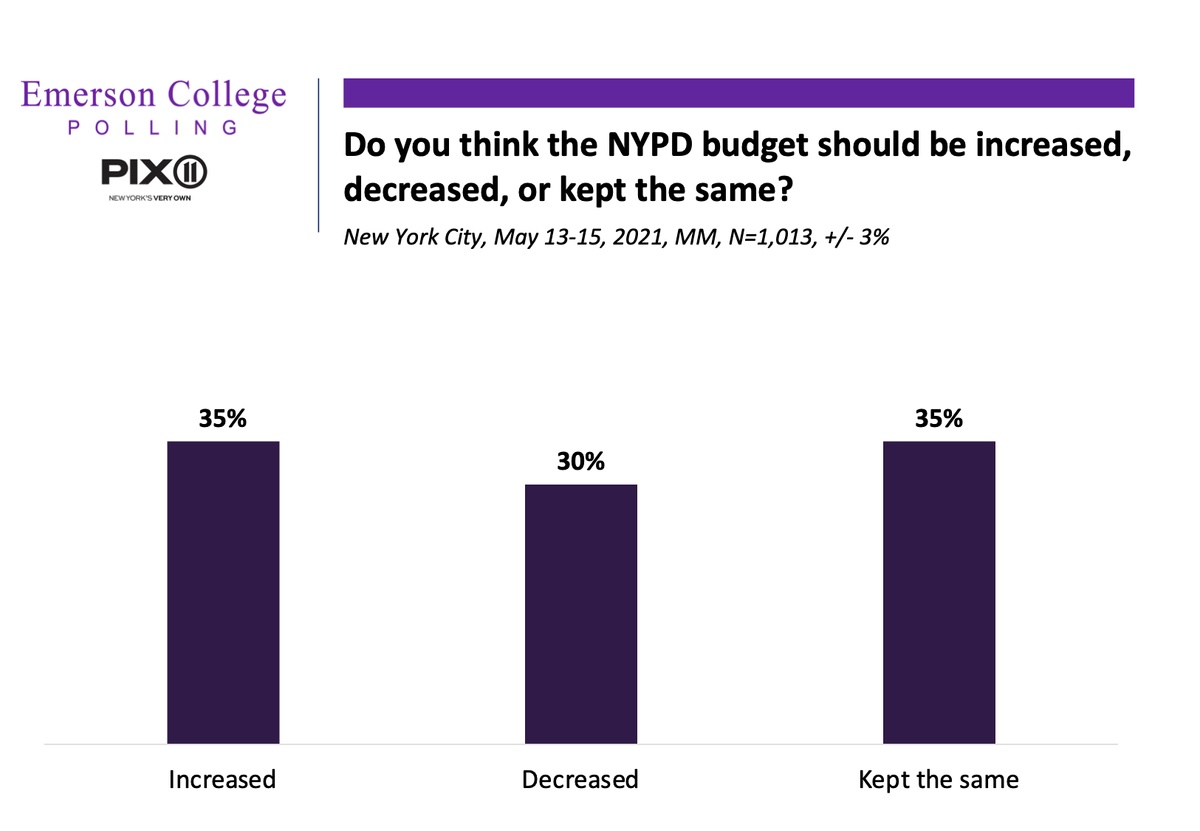 President Joe Biden holds a 63% job approval in NYC, while Governor Cuomo is at 46%. Both elected officials' approvals are down from the March 6 poll when Biden held a 69% approval and Cuomo was at 55%.

Overall, NYC voters are split about potential policies that would require restaurants to designate sections for Covid-19 vaccinated and unvaccinated customers, with 36% indicating support, 34% in opposition, and 30% being unsure.

The PIX11/Emerson College NYC Mayoral poll was conducted May 13-15, 2021. The sample consisted of New York City registered voters, n=1013, with a Credibility Interval (CI) similar to a poll’s margin of error (MOE) of +/- 3 percentage points. The data sets were weighted by borough, age, education, race, and party registration based on a 2021 turnout model. It is important to remember that subsets based on gender, age, party breakdown, ethnicity, and region carry with them higher margins of error, as the sample size is reduced. Data was collected using a cellphone sample of SMS-to-web and an online panel. 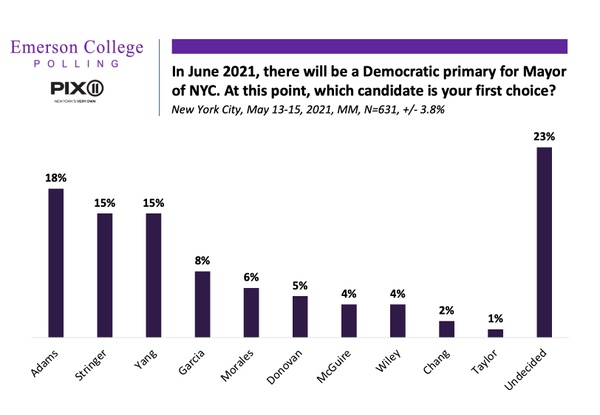 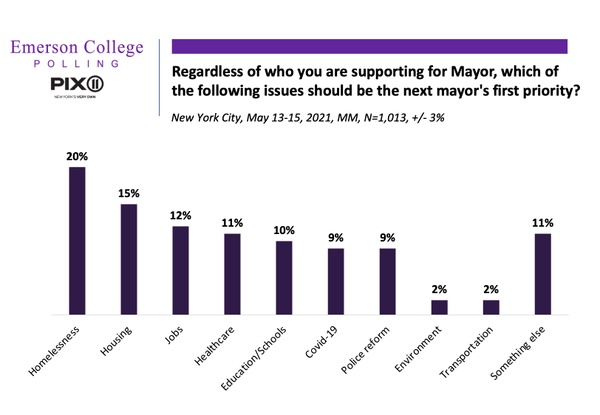 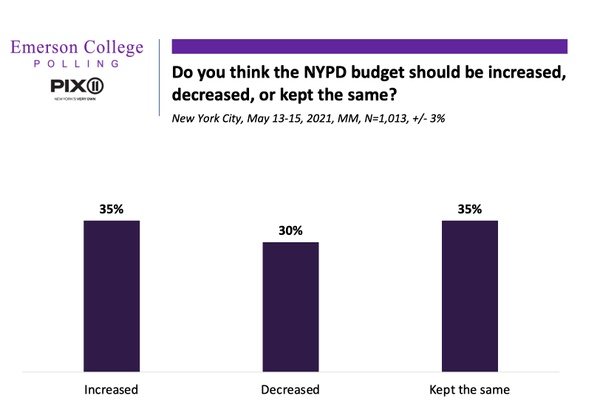