The third PIX11 News/Emerson College poll of the New York City mayoral race finds former commissioner for the NYC Sanitation Department Kathryn Garcia now leading the Democratic primary, at 21%, closely followed by Brooklyn Borough President Eric Adams at 20%. Entrepreneur Andrew Yang is in third, at 16%, New York City Comptroller Scott Stringer is at 10%, former counsel to Mayor de Blasio Maya Wiley is at 9%, and nonprofit executive Dianne Morales is at 7%. All other candidates polled below 5%, and 9% are undecided. 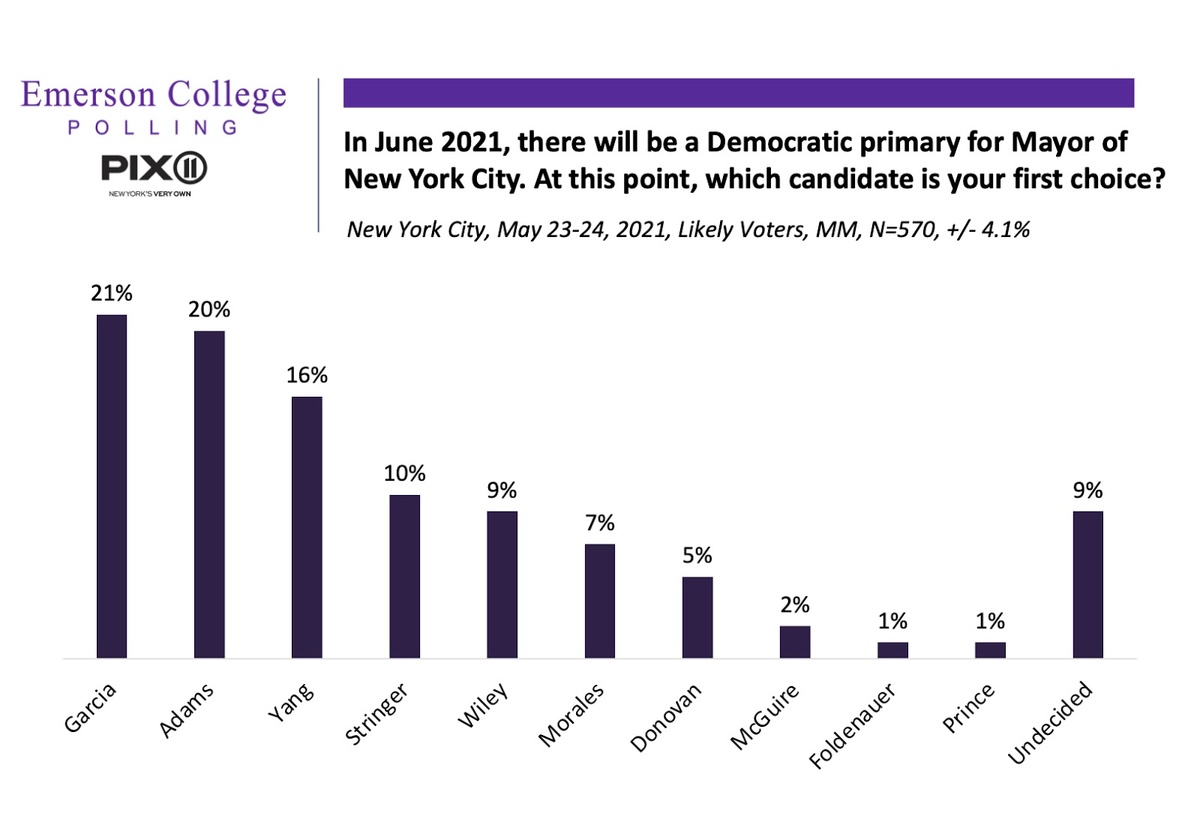 Over the course of the three surveys, PIX11 News and Emerson College have conducted on this race, Garcia shows the most momentum, moving from 5% on March 6, to 8% on May 15, up to 21% as the leader in the latest poll. In comparison, Adams has held steady in all three polls: he started at 19%, dropped a point in May to 18%, but now sits at 20%. Yang took the hardest dive from leading the field with 32% in March, but over the next 8 weeks his lead was cut in half to 15%, and now looks to have settled at this point at 16%. 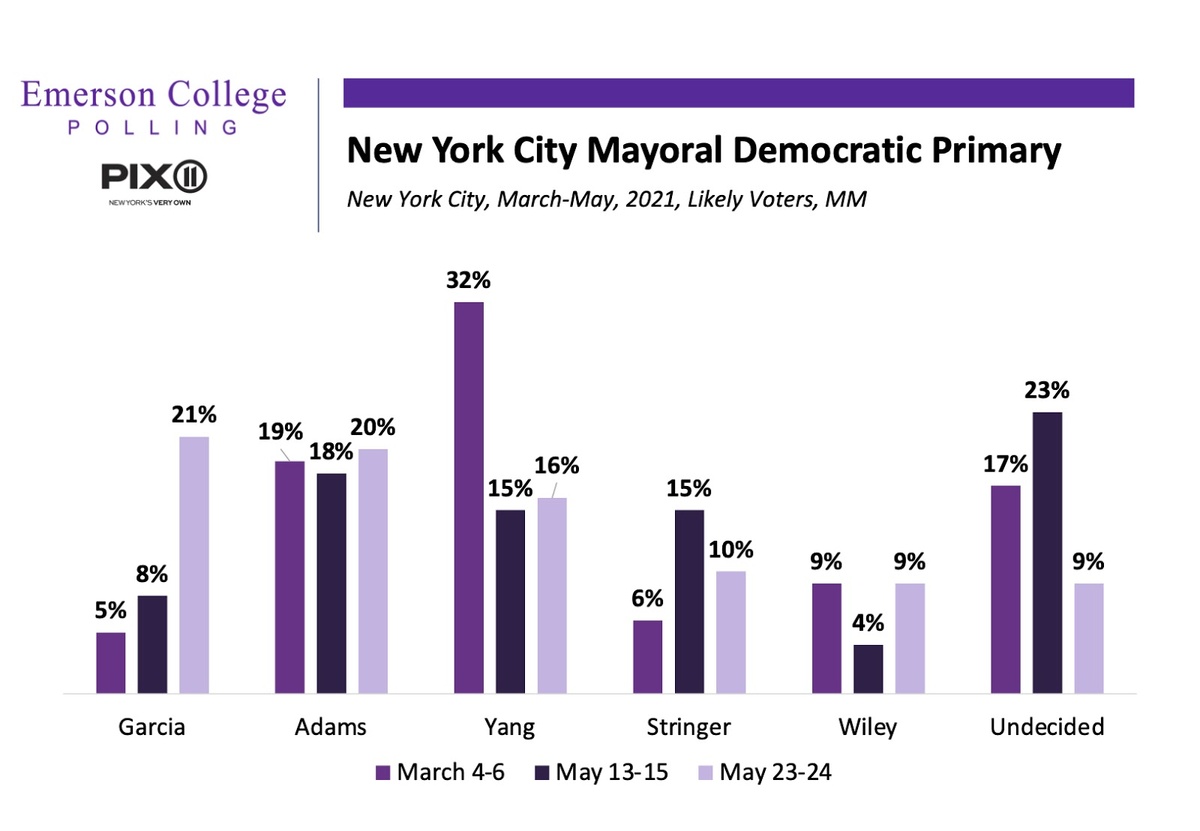 Stringer appears to have had his best momentum earlier in May, after jumping from 6% in March to 15% in early May, then back down to 10% in the latest poll. Wiley and Morales have not moved much over the 3 months, as Wiley finds herself at 9%, where she was in March,   and Morales has slightly moved up each poll, from 4% in March, to 6% earlier in May, and now garnering 7%.

More voters appear to be making up their minds, as the undecided percentage has fallen 14 points, from 23% in last week's poll to 9%.

Voters were asked to rank up to five candidates in order of preference, to reflect NYC’s new rank-choice-voting system. Garcia maintains the first place position in all rounds except for round 6, where she is edged out by Adams by 0.3%. Wiley, who ranks 5th in the initial preferences, edges out 4th place Stringer in Round 8, after capturing a large percentage of Morales’s voters. When Wiley is eliminated after Round 9, Garcia benefits the greatest percentage, rising from 31% to 40%. 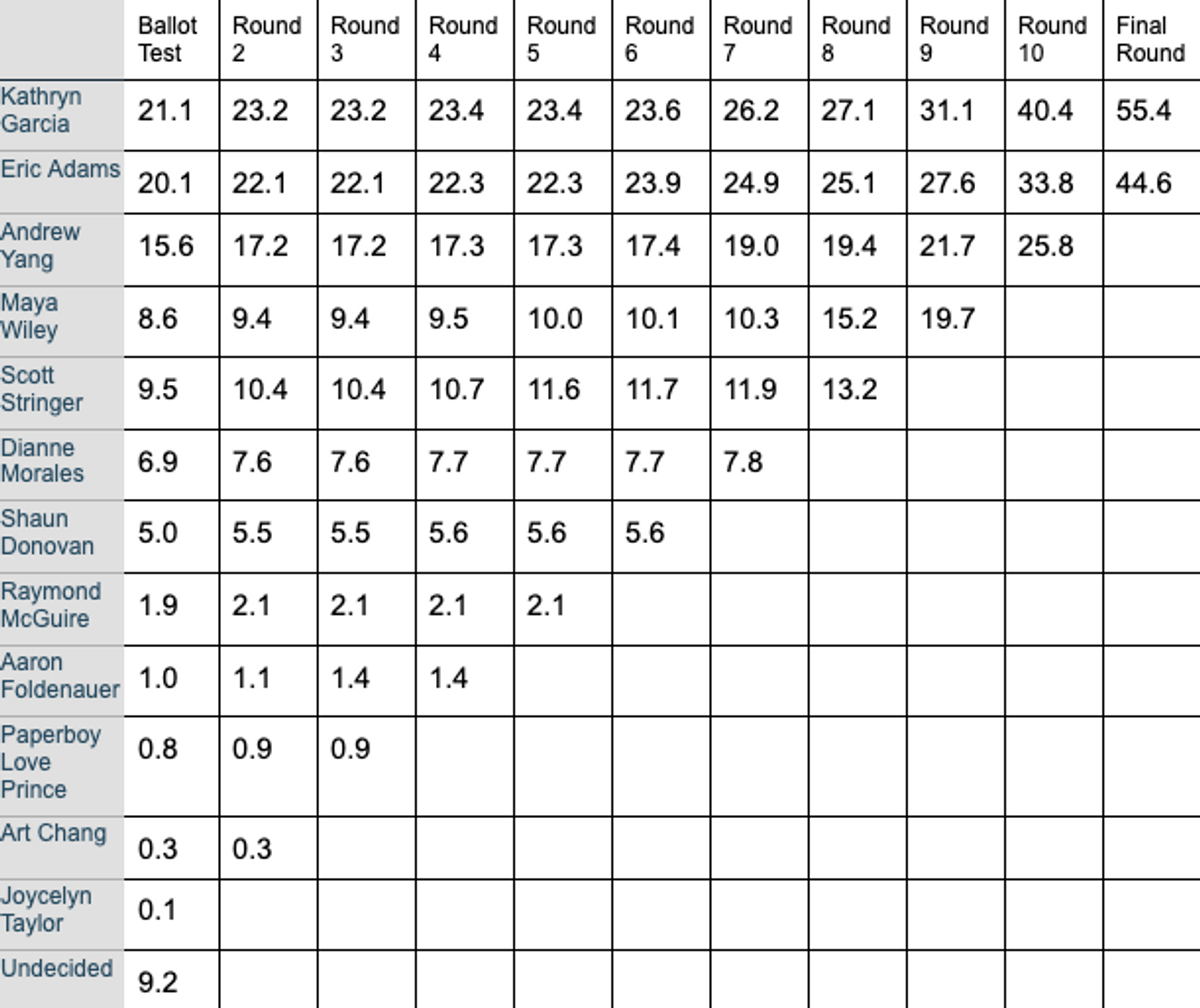 A plurality (46%) of voters aged 18-29 are voting for Yang in the first round of voting, followed by 27% of that age group who prefer Garcia. In the final round, where Garcia faces Adams, she captures 72% of the age group, compared to Adams who gets only 28%.

Voters were asked regardless of who they are supporting for Mayor, which issue should be the next mayor’s first priority. Twenty percent (20%) of respondents identified crime as their first priority, followed by housing with 17%, homelessness at 12%, Covid-19 at 11%, and police reform at 10%.

The PIX11/Emerson College NYC Mayoral poll was conducted May 23-24, 2021. The sample consisted of New York City registered voters, n=895, with a Credibility Interval (CI) similar to a poll’s margin of error (MOE) of +/- 3.2 percentage points. The data sets were weighted by borough, age, education, race, and party registration based on a 2021 turnout model. It is important to remember that subsets based on gender, age, party breakdown, ethnicity, and region carry with them higher margins of error, as the sample size is reduced. Data was collected using a cellphone sample of SMS-to-web and an online panel. 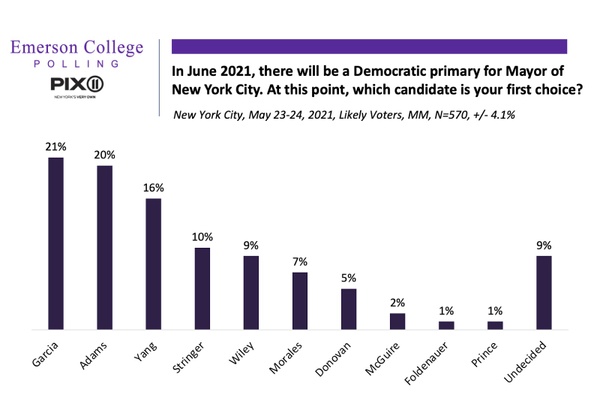 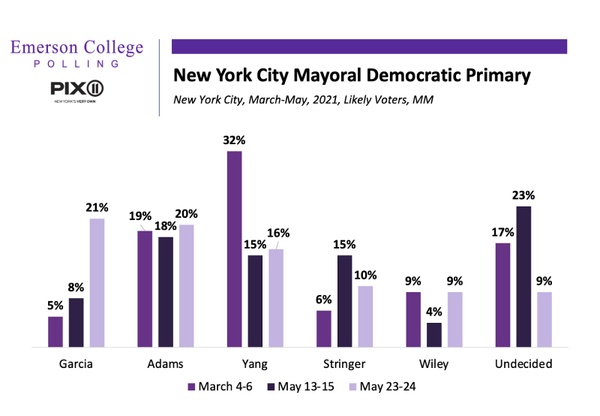