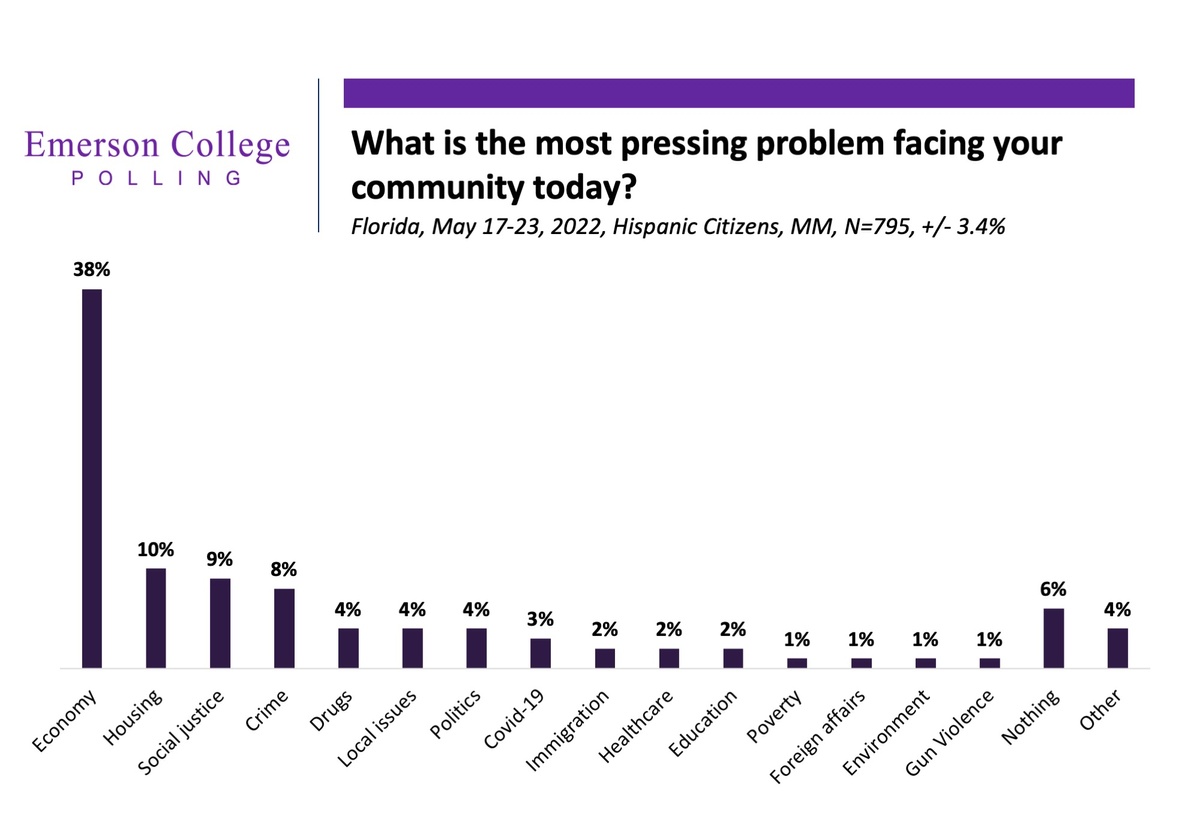 Nearly two in five Florida Hispanic residents, 38%, say the economy is the most pressing problem facing their community today. Across focus groups of voters and non-registered citizens, individuals categorize inflation and the rising cost of living as some of these economic factors, and say these issues are taking a significant toll on their personal and familial livelihoods.

A 19-year-old Nicaraguan woman said “it's getting harder and harder to live, and to live off the income that you're making, it's ridiculous…You go to a store and purchase certain things and you don't notice it, but they make packaging smaller, and you're paying a higher price.”

Several focus group members voiced concern over the economic toll on low-income individuals and young people. “It's like they are running the lower income people out of Florida. And they're lowering the middle class to a lower income,” a 44-year-old Republican male voter said.

Housing was a top issue for one in ten survey respondents. A 52-year-old Democratic Cuban voter said, “I've been here for 30 years. I tell my wife it's just getting so expensive, as they would say of New York and California, but we're up there with rent.”

Social justice issues, including racism and equality, were the most pressing matter for 9% of respondents overall, and this percentage rises to 24% among Hispanics between 18 and 24. On the topic of racism, focus group participants were asked where they see or experience racism the most. Some members said it is more prevalent online, on social media sites like Facebook.

Crime is a top issue for 8% of participants. Regionally, the issue was significantly higher in the Tampa-Clustion area (12%) and Orlando (14%) than it was reported in the North Florida (5%) and South Florida (6%) regions.

Politics: Democratic and Republican Party Positive to Plurality of Hispanics 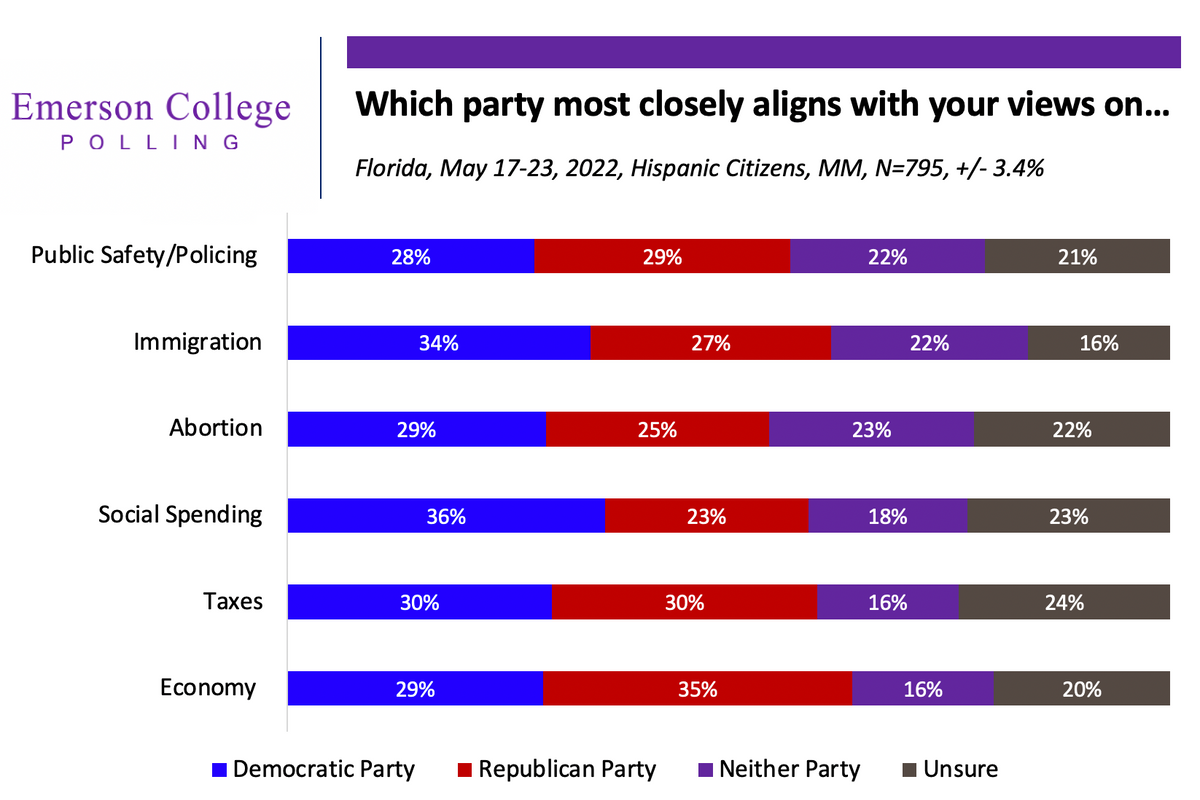 Across focus groups, former President Trump and the Republican Party were associated positively on the economy. A 19-year-old female non-registered citizen said, “I personally don't like Trump's character, but…we did have a good economy, with him as our president, you know?”

Distaste for Trump’s character exists across all three focus groups; however, his leadership is associated with a stronger economic state. “I think it may be a product of the way he ran the country, because he was running it as a business. It wasn’t as a politician, it was more for the benefit of us, of the citizens.” a 45-year-old Nicaraguan-born voter said. In another focus group, this sentiment was echoed, “Yes it wasn't perfect, it's never going to be perfect, but I think it was a lot better back then. I don't see any change with Biden.” a 51-year-old Republican Cuban female voter said.

On immigration, 34% of Florida Hispanics say they align with the Democratic Party, while 27% identify with the Republican Party. Registered voters are evenly split 35% to 35% on the issue. Focus group participants expressed frustration over identified lack of action on immigration by both parties. A 60-year-old Cuban Republican voter said, “And if you go back to Bush, Clinton, Obama, everyone of those guys said the same exact thing on immigration policy and there should be a right way to get in. Everyone. And what has changed? Nothing. So that's why I hate them both, that's my story.”

Among naturalized citizens in the focus groups, many emphasize supporting legal immigration practices, rather than engaging in discussions of amnesty. A 58-year old Cuban Independent female voter said: “I give a very simple example regarding immigration. In my house I let in whoever I think should enter. Whoever doesn’t, cannot enter. He cannot enter through the back door…My house is my house and you come to visit it, to stay and live there, but you have to respect my conditions, my laws that I have in my house.”

Voting and Civic Attitudes: Distrust in US Elections is High; Hispanic Voters Born Outside US Feel Sense of Duty to Vote

“I think when I see better candidates I'll consider voting,” a 34-year-old Cuban non-registered citizen said. When pressed what that candidate might look like, they said “somebody who's not influenced by big companies and big money. Because a lot of these candidates … they do things just because somebody is backing them up with millions and millions of dollars … Governors, with senators, with mayors, everybody. And then Trump … well he's got his own money, so maybe he's making his own decisions. But, then he's kinda reckless.”

Among non-registered citizens, pluralities disagreed with the statements that their "vote won't change anything" (48%) and that "there's no difference between Democrats and Republicans" (45%).

There was significant distrust of the voting process among several non-registered citizens in the focus group in South Florida. “To me, [voting] all appears to be predetermined,” a 40-year old woman said. One participant asked fellow group members who thought the 2020 election was stolen from Trump. Other participants affirmed believing the election was rigged, and shared the sentiment that Trump actually won. A 52-year-old Venezuelan woman described the 2020 election as “an exact copy of what happened in Venezuela for 20 years.”

Regarding ballot initiatives, several voters across focus groups thought they were confusing, and sometimes deceiving. “Some of the questions sound like trick questions, you know? Like, if you wanna say, "Yes, I want this," but the way they word it, you have to put no… The questions are so long, they sound so complicated. Why can't they just make it simpler? On the ballot so you.. can say, "Yes"? You know, but sometimes it's like a trick question,” a 34-year-old Cuban man said.

The duty to vote was expressed more explicitly in the Spanish-speaking focus group, where all members were born outside the US and became naturalized citizens. A 33-year-old Cuban-born Democratic woman said, “I felt like a citizen when I registered to vote. It's like a privilege, it's a decision you are making. Whether you win or not, it's a right, it's a right.” An independent female voter, born in Peru, said, “In Peru it is said that voting is a duty, not a right. One always has that mindset that it isn’t optional, that you have to contribute with your vote in such an important decision for the country. For me becoming a citizen was in my mind that it is a duty that I have to vote and contribute with my vote, good or bad.”

A majority, 53%, of respondents rely on cable or network news as their main source of information; 23% rely on social media, and 13% rely on local news.

Regionally, respondents in North Florida and the Orlando area were more likely to report using local news as their top source than those living in the Tampa area or those living in South Florida.

Focus group members expressed concern over bias on media platforms. “There's huge media bias. From the left and the right, if you wanna call it that. And no matter what you see, I like to look at different things to get different perspectives,” a 60-year-old Cuban Democratic voter said.

Focus group participants expressed some level of distrust regarding information on social media platforms, and some were mindful of the algorithms that bring information to their newsfeeds.

Note: Quotes from focus groups have been edited for brevity and clarity. 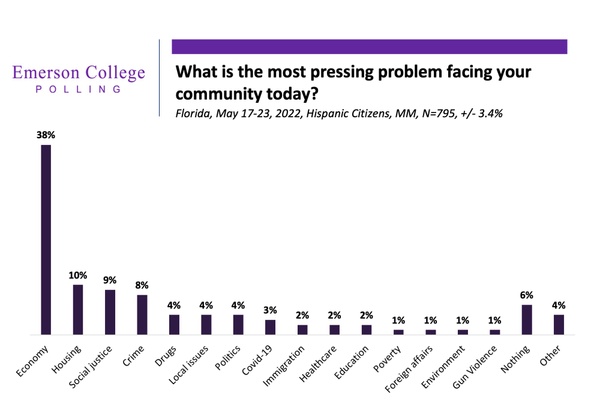 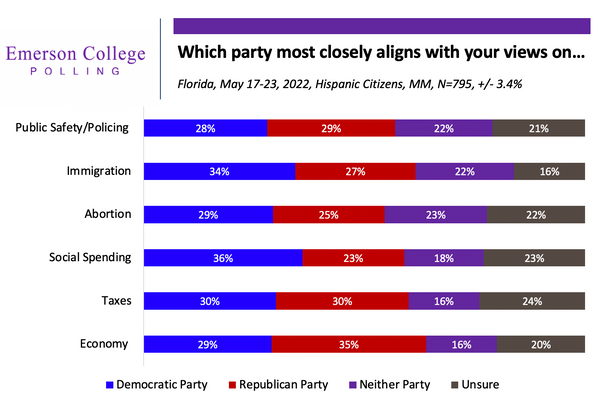