Boston, MA, May 24, 2022 -- Today, Emerson College Polling released Unlocking the Hispanic Vote: Colorado, a research initiative that uses a combination of focus groups and surveys to better understand Hispanic attitudes and beliefs towards policy issues, voting, politics, and media. The Colorado Hispanic survey was conducted April 19-25, 2022, and three focus groups of Hispanic voters and non-registered citizens were conducted in Spanish and English on May 2 and 3, 2022. This follows last month’s report on Texas. Leer en español / Read in Spanish 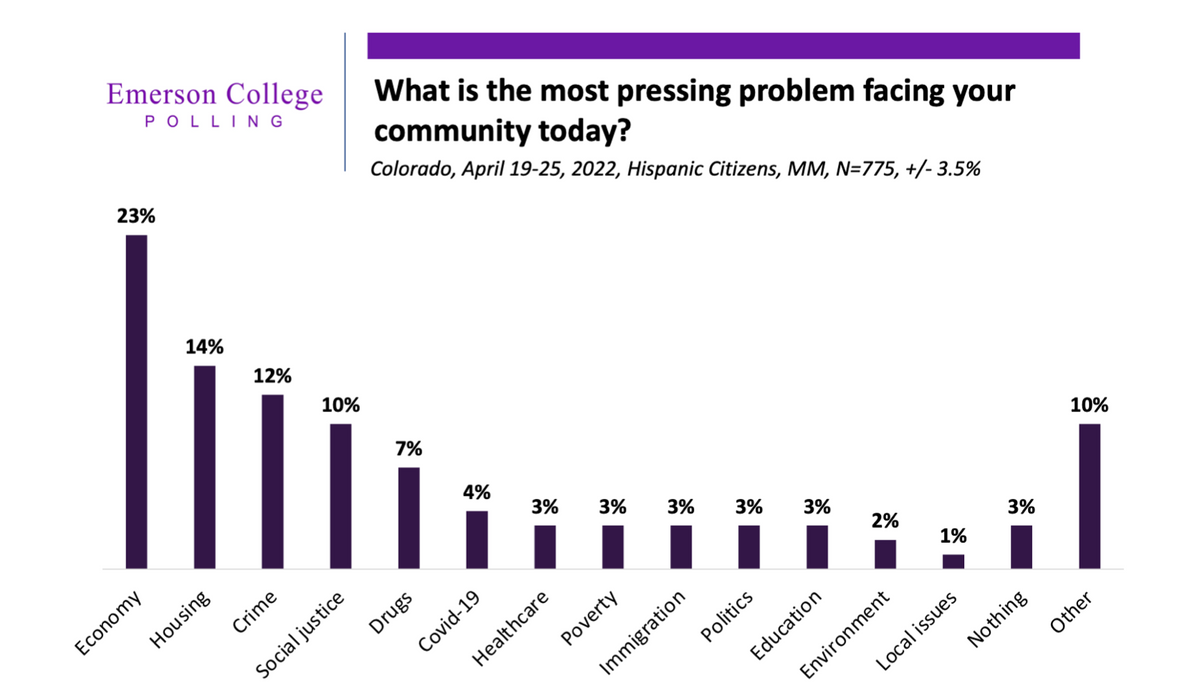 The most pressing issue Colorado Hispanics identified facing their community in the survey is economic issues, such as rising costs (23%). “Food is becoming more expensive,” a 55-year-old woman said, “I think about the families that are making that minimum wage, how they are affording food right now.” She also voiced concerns about her ability to retire due to her economic state.

A 59-year old female state university employee expressed apprehension about future generations’ livelihood. “I'm also concerned about, like I said, I have four grandkids. Wondering what their life's gonna be like as they become adults.”

The cost of housing was the second most pressing issue facing the community for survey respondents at 14%. Non-registered citizens in the survey were more likely to report housing and crime as pressing problems facing their communities compared to voters. A 62-year-old voter said regarding the cost of housing, “There's people here who have been trying to save up for years, they needed $10,000 to buy a house, now they need $30,000, and it's still not enough.”

Fentanyl overdoses were significantly concerning to participants across all focus groups, and drugs were identified as the most pressing issue facing their communities by 7% of survey respondents. A 39-year-old non-registered female business owner said, “There's a lot of overdose on fentanyl. There's a lot of people right now being found dead over because they've gone to do some cocaine. Little did they know that that cocaine had that fentanyl, and they died. They're doing one drug but they don't realize that it has another one.”

Some focus group members expressed concern over the distribution and promotion of Narcan. “It drew my attention when I saw in the news that they launched a drug for people who leave their homes and are addicts, so if they come to consume the drug, they take the dose themselves so they won't die. So it's like saying, ‘Oh, keep doing it, because now there's something to keep you from dying.’ That called my attention, I mean wow. Instead of preventing the problem, it's like supporting those people?,” a 49-year-old Democratic esthetician in the Spanish focus group said.

In the survey, a plurality, 37%, of Hispanic voters said they decided to vote in the last election because they feel a duty as a citizen to vote. “It was more instilled with my parents,” a 55-year-old woman in the Colorado voter focus group said, “they were like ‘you know that’s your civic duty, you live in a free country. So you know, you have a right to cast that vote.’”

Colorado voters are provided with ballot information booklets prior to Election Day, also known as “blue books” that provide analysis of initiated or referred constitutional amendments, laws, or questions on the ballot. A 42-year-old female voter in the focus group described blue books as “very informative, because it helps you digest some of the questions,” however, a 49-year-old man countered their efficacy, describing them as “slanted,” and “written by the politicians.”

Non-registered citizens in the survey were split on whether or not their vote matters: 41% agreed that their vote would not change anything and 43% disagreed with that sentiment. Those aged between 18 and 24 were most likely to agree that their vote would not change anything, at 60%. “I mean, I don't want to [register to vote],” a 22-year-old non-registered citizen said. “It's not gonna really change a whole lot, more of the change comes from the local level if you really wanna change something.”

When non-registered citizens were asked in the survey what could get them to register, 40% said they could be motivated if they were more informed while 39% said nothing could persuade them.

“I just never really understood how the voting process worked,” a 39-year-old female non-registered citizen said. “How I see it is I didn't go to school fully…even then I didn't really understand…in reality, what votes [do] they take into consideration and whose vote actually counts? It's not really a public vote. It's somebody else's right?”

A 31-year-old Independent female voter said, “I think everyone kind of wants a token, like, ‘Okay, we get that Hispanic vote,’ or, ‘Let's just, make sure we've got the identity part’ ... Like, the identity politics of the Latinos there,’ but, not necessarily, looking into all the issues that some of the Latino people would care about. I think sometimes it comes back to wanting to tell you what you need.”

In the survey, Hispanic voters more strongly align with the Democratic Party on issues such as abortion, immigration, and the economy, but are more split on which party they align with on public safety and policing.

“When I think about the Democrats I think social programs, a lot of freedom of expression, more liberal[ism], they focus more on minorities,” a 51-year-old male voter and father of seven daughters continued, “Republicans are more capitalist, more conservative, possibly less taxes or at least more break in taxes for the rich, but I also think more wars. It's not that the Democrats don't wage wars, but there are certain differences. But in the end they all work for multinational companies, and that's the problem.”

Frustration was expressed regarding costs associated with Democratic programs and unfulfilled campaign promises. “For the Democrats, the first thing that came to my mind is that prices go up and the economy sinks down. A lot of promises to reform things, but nothing really happens,” a 62-year-old woman in a voter focus group said.

Across focus groups, there was general distrust toward social media platforms, although Facebook and TikTok were more trusted due to video content. When asked which platform they trust more, Facebook or TikTok, a 28-year-old Independent voter said she trusts TikTok, “because of the people, watching the videos and all those people talking, it has a lot of information, too much information. When I go to Facebook I sometimes get news and everything. I can click on a video and watch a news clip, but I don't exactly see all that is happening.”

A plurality (37%) of poll respondents rely on cable or network news, but when pressed, focus group respondents identify trust more in individual newscasters or news programs than the platform of television news itself.

“Sometimes it's just a person that you prefer reporting the news that you know that they kind of don't put a weird spin on it, so somebody that you trust versus a whole network. That's kind of how I am. I have a few people like journalists or podcasters or something that I'll like to read their stuff, but I don't necessarily read the whole newspaper,” a 31-year-old web designer said.

The next installment of this nation-wide research project is Florida, where a survey of Hispanic non-registered citizens and voters along with three focus groups will be released in June 2022.

Note: Quotes from focus groups have been edited for brevity and clarity. 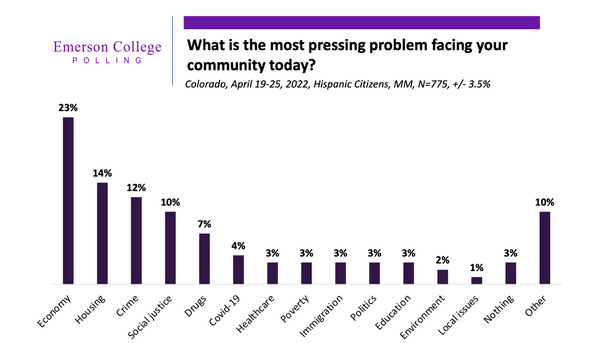