A new Emerson College/NewsNation poll of the Great Lakes state shows former Vice President Joe Biden holding a ten-point lead over President Donald Trump. Fifty-two percent (52%) of voters plan to support Biden, 42% intend to vote for Trump, 2% plan to vote for another candidate, and 3% remain undecided at this point. In 2016, Trump won Michigans’ 16 electoral votes after winning the state by 10,704 votes. 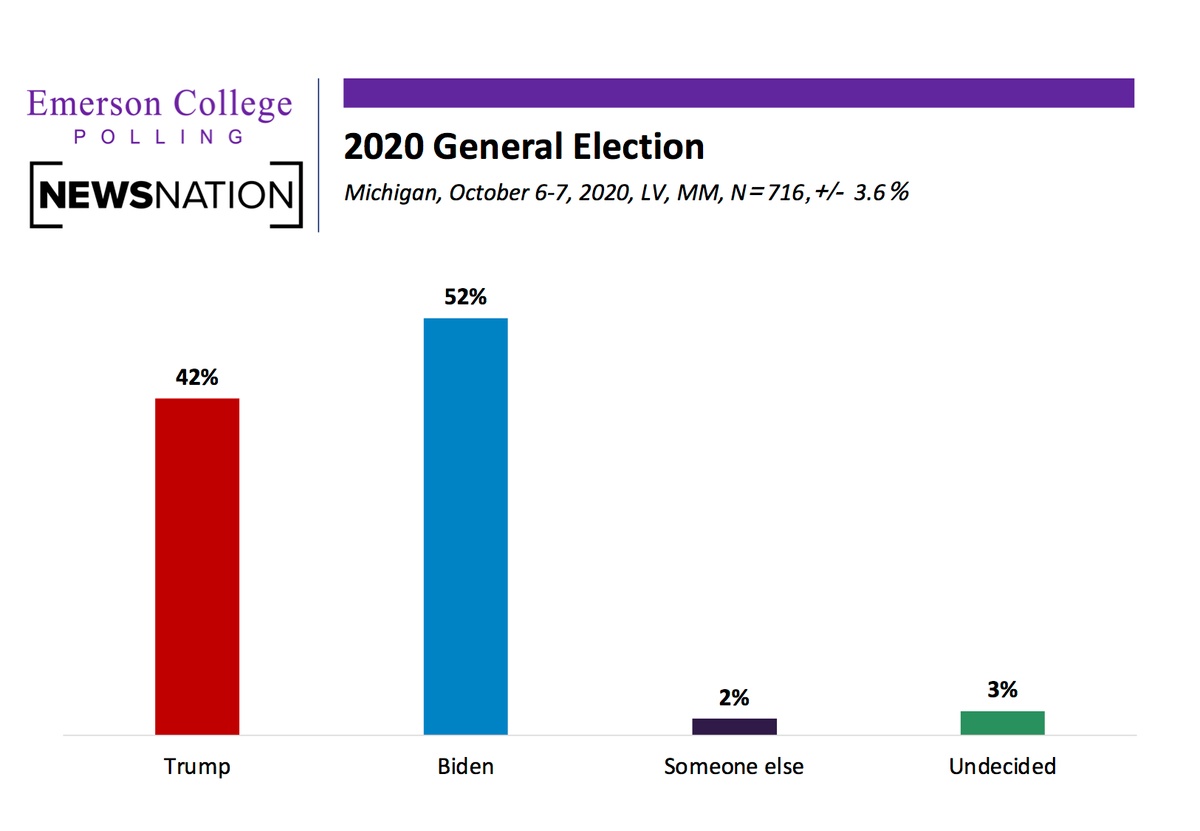 Spencer Kimball, Director of Emerson College Polling, said: “a 10 point lead in a state Clinton lost is significant, and Michigan appears to be one of Biden’s better pick up opportunities in 2020."

A majority, 51%, of voters believe that COVID-19 is a major threat to public health in the US, while 31% think it is a moderate threat. Twelve percent (12%) view it as a minor threat, and 5% feel it is not a threat. Those who report COVID-19 as a major health concern break for Biden 79% to 17%, while those who see it as a moderate issue break for Trump 59% to 32%. Eighty-eight percent (88%) of those who report it as a minor to no threat are breaking for Trump. This is a consistent trend seen in the previous Emerson polls in Pennsylvania and New Hampshire. 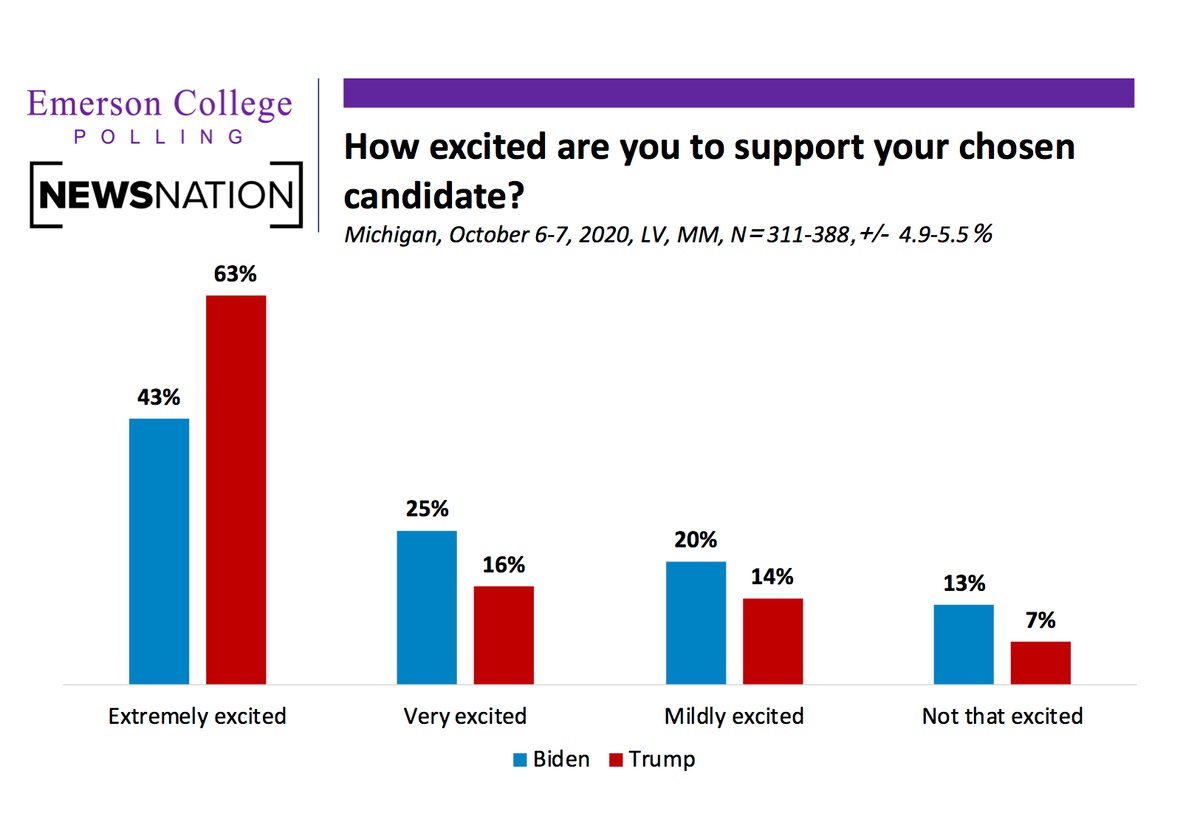 Regardless of who voters plan to support, 53% think Biden will win the election in November. The remaining 47% think that Trump will win.

As for President Trump’s approval amongst voters in Michigan, 42% approve of his job as President, 54% disapprove, and 4% are neutral.

Democratic incumbent Senator Gary Peters is leading against his Republican challenger John James. Peters is up ten-points with 51% support. Forty-one percent (41%) plan to support James, 2% plan to support someone else, and 6% remain undecided.

Half of Michigan voters (50%) reported viewing Biden as the more honest candidate in the race. Of the remaining voters, 37% said Trump was more honest, and 14% said neither of the two. 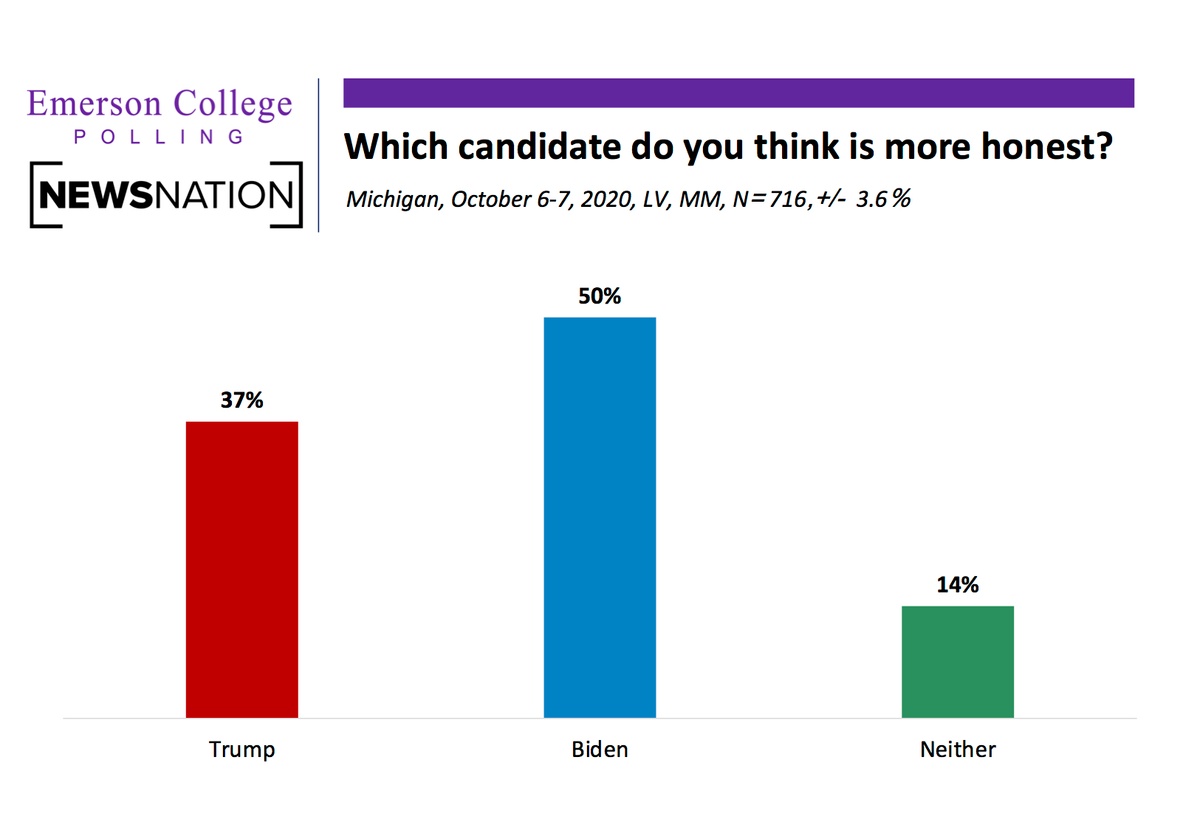 When asked the most important issue in deciding their vote for president, the economy ranked highest at 30%, followed by COVID-19 and healthcare at 16% respectively, social justice at 15%, climate change at 7%, and the Supreme Court at 5%. Twelve percent of voters said something else. Among Trump voters, a majority (52%) say the economy is the most important voting issue to them, while Biden voters are split between COVID-19 response (24%), social justice (20%), and healthcare (19%).

Regarding President Trump’s recent COVID-19 diagnosis, 20% of voters said it made them more likely to support the president in November, 25% said less likely, and 55% said it had no impact on their vote.

The plurality (49%) of respondents think that Supreme Court Justices should be limited to serving one 18 year term. Twenty percent (20%) do not support this and 31% are unsure.

The Michigan Emerson College/NewsNation poll was conducted October 6-7, 2020. The sample consisted of likely registered voters in Michigan, n=716, with a Credibility Interval (CI) similar to a poll’s margin of error (MOE) of +/- 3.6 percentage points. The data sets were weighted by gender, age, and education based on 2016 voter turnout modeling. It is important to remember that subsets based on gender, age, party breakdown, ethnicity, and region carry with them higher margins of error, as the sample size is reduced. Data was collected using Interactive Voice Response (VIR) system (n=358), SMS-to-web texting (n=95) and an online panel provided by MTurk (n=264). 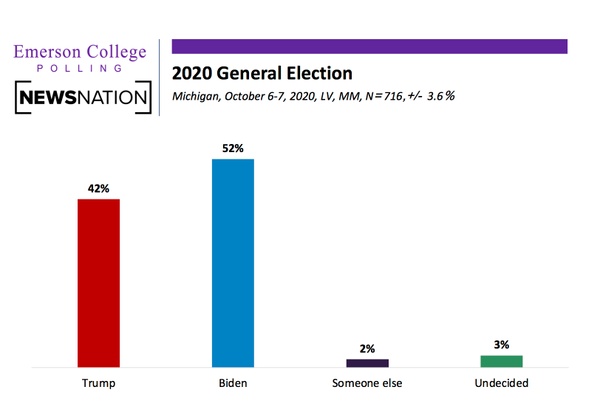 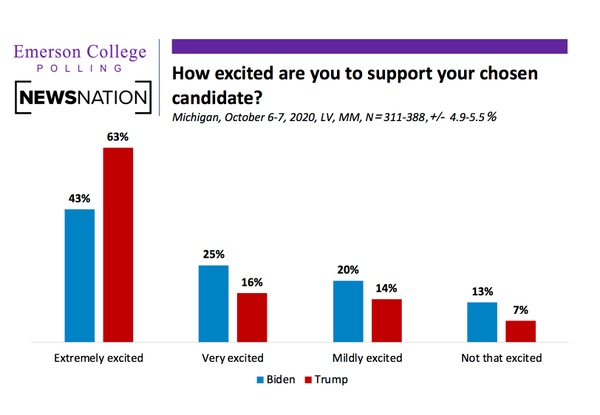 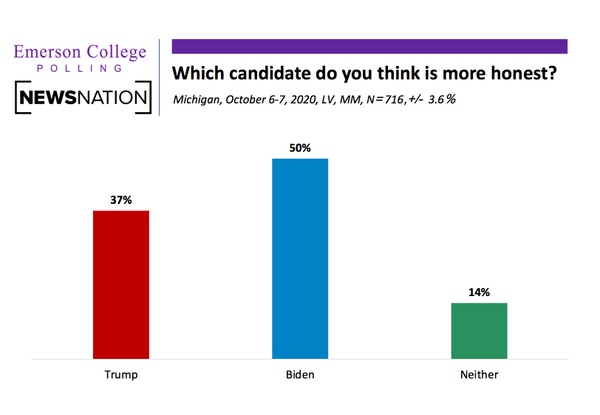