The final Emerson College Poll of very likely Republican primary voters found the Trump-endorsed candidates with plurality support in their respective elections for U.S. Senate and Governor. In the primary race for US Senate, Mehmet Oz holds 28% support, followed by Kathy Barnette with 24%, and David McCormick with 21%. Fifteen percent (15%) are undecided, and were asked a follow-up question on who they are leaning towards. With their support allocated, Oz increases his support to 32%, followed by Barnette with 27%, and McCormick with 26%. Since last month’s Pennsylvania GOP poll, Oz has gained 10 points and Barnette has gained 12 points, while McCormick has lost two points. 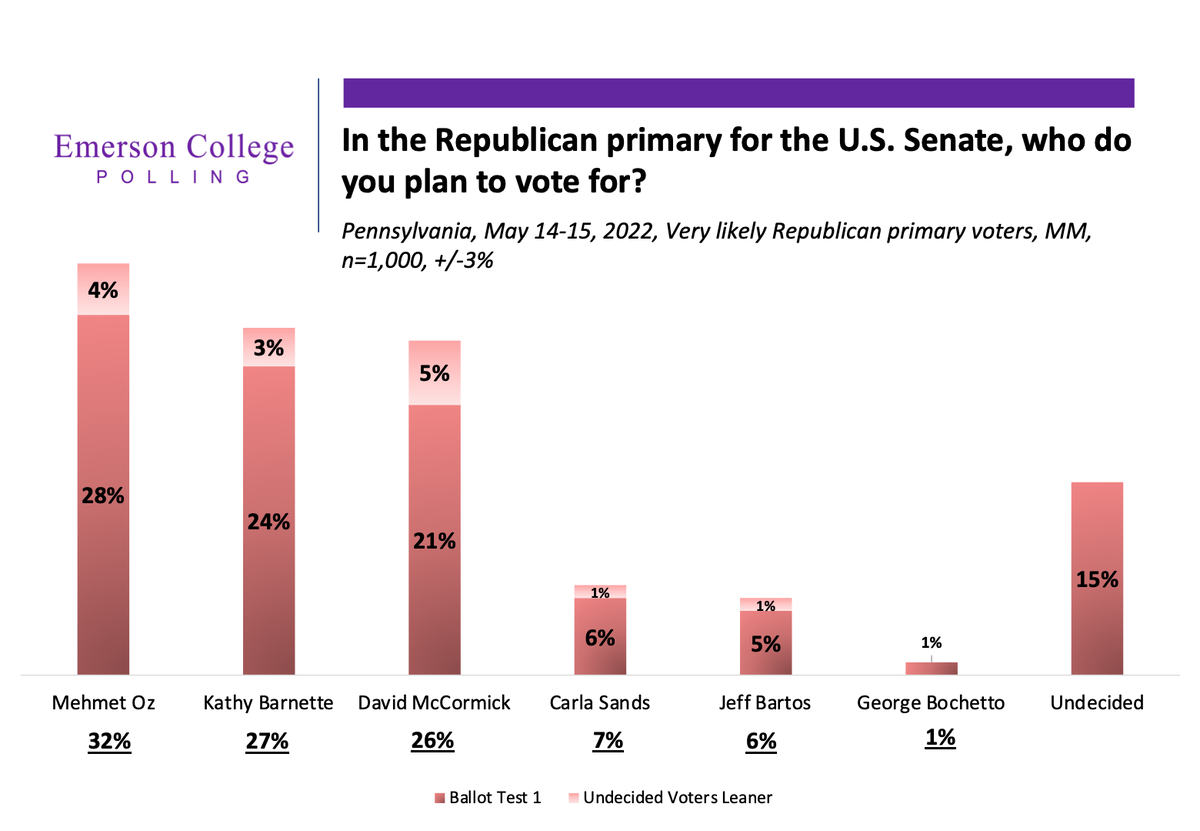 In the GOP gubernatorial race, Doug Mastriano has surged to first place with 34%, while Lou Barletta trails with 22%. Fifteen percent (15%) are undecided, and were again asked a follow-up question on who they are leaning toward. A majority, 54%, of undecideds break for Mastriano when asked. With undecided voters’ support allocated, Mastriano increases his share of support significantly to 42%, while Barletta reaches 24%. Since the April Emerson GOP poll, Mastriano has gained 20 points while Barletta has lost three points.

Spencer Kimball, Executive Director of Emerson College Polling said, “Among those who have already voted, Mastriano has 13%, but his support rises to 37% of those who plan to vote on election day. His opponent Barletta is getting about an equal share with 25% of the early vote and 21% of the election day voters. That type of election-day vote momentum is not seen in the Senate race: Oz leads the election day vote with 27% followed by Barnette at 24%.”

The Emerson College Polling Pennsylvania poll of Republican primary voters was conducted May 14-15, 2022. The Republican primary sample consisted of very likely voters, n=1,000, with a Credibility Interval (CI) similar to a poll’s margin of error (MOE) of +/- 3 percentage points. The data sets were weighted by age, gender, region, education and mode based on 2022 turnout modeling. It is important to remember that subsets based on gender, age, ethnicity, and region carry with them higher margins of error, as the sample size is reduced. Data was collected using a cellphone sample of SMS-to-web and an Interactive Voice Response (IVR) system of landlines. 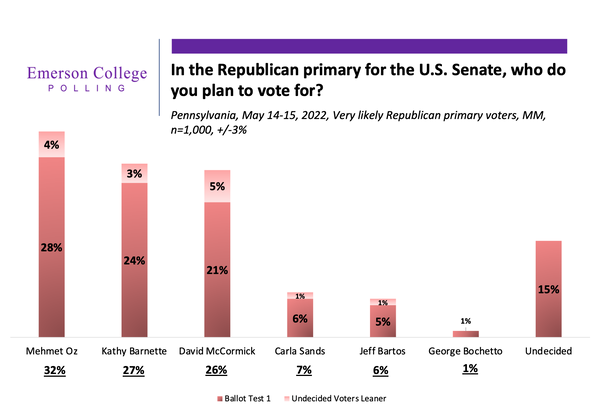 AAPOR Transparency Initiative
Download
Related Bios
https://cdn.filestackcontent.com/wUtByJnESd6l7h7oQ8Zw?dl=true
https://cdn.filestackcontent.com/AG3wH2AR3SP2Mo58NZitaz/rotate=exif:true/resize=width:600/wUtByJnESd6l7h7oQ8Zw
Professor Kimball teaches Political and Sports Communication courses in both the undergraduate and graduate programs at Emerson College. He is the director of Emerson Polling and the advisor for the Emerson Pre-Law Society and the Emerson College Polling Society. Kimball is a national pundit quoted in a variety of publications including the Wall Street Journal, Boston Globe, Huffington Post, Washington Post, Fox News, the National Journal, and National Public Radio (NPR).