A final Emerson College Poll of Ohio Republican Primary voters less than a week out from the May 3 primary election finds a tight race among the top four candidates: JD Vance leads the field at 24%, followed by Josh Mandel at 22%, Matt Dolan at 18%, and Mike Gibbons at 14%, with 11% undecided. Undecided voters were asked who they are leaning towards. With these voters allocated, Vance expands his support to 26%, Josh Mandel to 24%, Matt Dolan to 21% and Mike Gibbons to 17%. This is a significant shift from the February Emerson College Ohio Poll, where Gibbons was ahead at 22%, followed by Mandel at 15%, Vance at 8%, and Dolan at 6%. 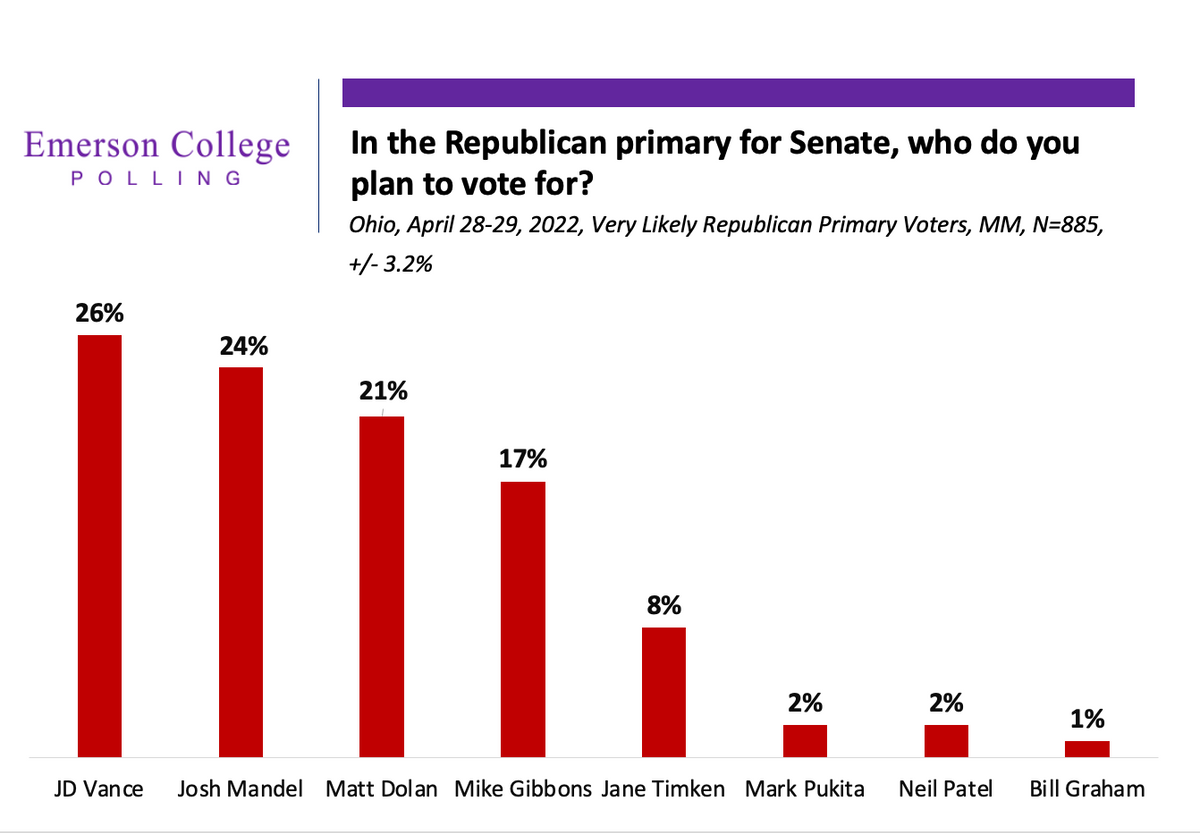 In the Republican Primary for Governor, 45% plan to support Governor Mike DeWine, followed by Jim Renacci at 30%, and Joe Blystone at 12%; 12% are undecided. These undecided voters were asked who they are leaning towards. When undecideds are allocated, nearly half (49%) of voters plan to support the DeWine, followed by Renacci at 35%, and Blystone at 14%. Since February, Gov. DeWine has extended his support from 34% to 49%, Renacci jumped from 9% to 35%, and Blystone fell from 20% to 14%.

“Though Trump did not endorse a candidate in the gubernatorial primary election, Renacci leads DeWine among voters who are supportive of a Trump endorsement 42% to 35%; however, among those who said the endorsement would make them less likely to support the candidate, DeWine leads with 80% of the vote while Renacci is at 15%,” Kimball noted.

The Emerson College Polling Ohio poll was conducted April 28-29, 2022. The Republican primary sample consisted of very likely voters, n=885, with a Credibility Interval (CI) similar to a poll’s margin of error (MOE) of +/- 3.2 percentage points. The data sets were weighted by gender, age, education, race, and region based on 2022 turnout modeling. It is important to remember that subsets based on gender, age, ethnicity, and region carry with them higher margins of error, as the sample size is reduced. Data was collected using a cellphone sample of SMS-to-web and an Interactive Voice Response (IVR) system of landlines. 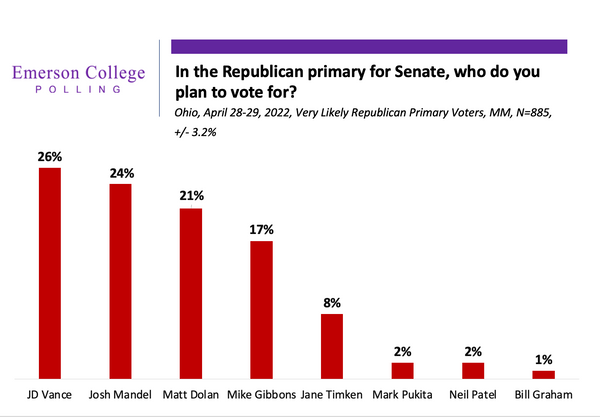