A new Emerson Poll finds former VP Joe Biden continues to hold a small lead in the Democratic primary nationally with 27% support, followed by Sen. Bernie Sanders at 25% and Sen. Elizabeth Warren at 21%, no other candidates clears 6%. (n=430, +/- 4.7%). This represents a small shift from Emerson’s September poll that had Biden at 25%, Warren at 23% and Sanders at 22%. 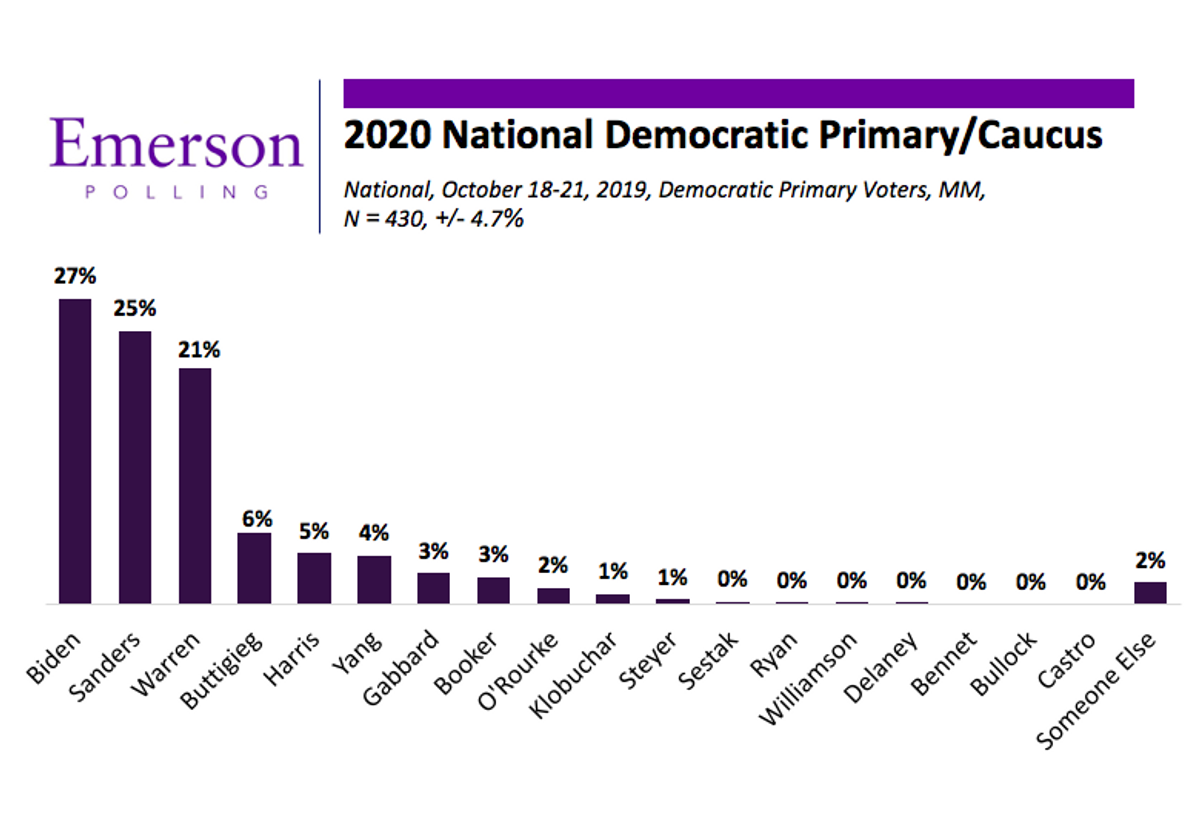 Sanders continues to dominate the 18-29 age group with 45% of the vote, followed by Warren at 17%, and Andrew Yang with 15%. As voters get older, Sanders sees his support drop, with 28% among 30-49 year olds, and only 15% of those 50-64 and 6% of voters over 65. Biden is more popular with older voters, receiving 12% support from 18-29 year olds, 17% from 30-49 year olds and 44% of voters over 50. Warren continues to pull similar support from those under 50 and those over 50. Emerson Polling Research Assistant Isabel Holloway notes that “having a more even age distribution of supporters could put Warren in a strong position, but, in order to capitalize on this strategy, either Biden or Sanders would need to lose their hold on their older and younger bases.”

Biden leads those who supported Clinton in the 2016 primary with 42%, followed by Warren with 16% and Sanders with 14%. Sanders holds a lead among those who supported him in the 2016 primary with 39% support, followed by Warren with 25% and Biden with 12%. Research Assistant Brendan Kane points out that “in order to create a winning coalition in the primary, Sanders will need to win back more of the voters who supported him in 2016 from Warren than he is currently receiving.”

Sanders also leads among very/somewhat liberal voters with 30% support, followed by Warren with 25% and Biden with 21%. Among moderate/conservative voters, Biden leads with 36% support followed by Sanders and Warren with 16%.

In potential head to head matchups against the top three Democratic rivals, Trump trails Warren, Biden, and Sanders 51% to 49%. 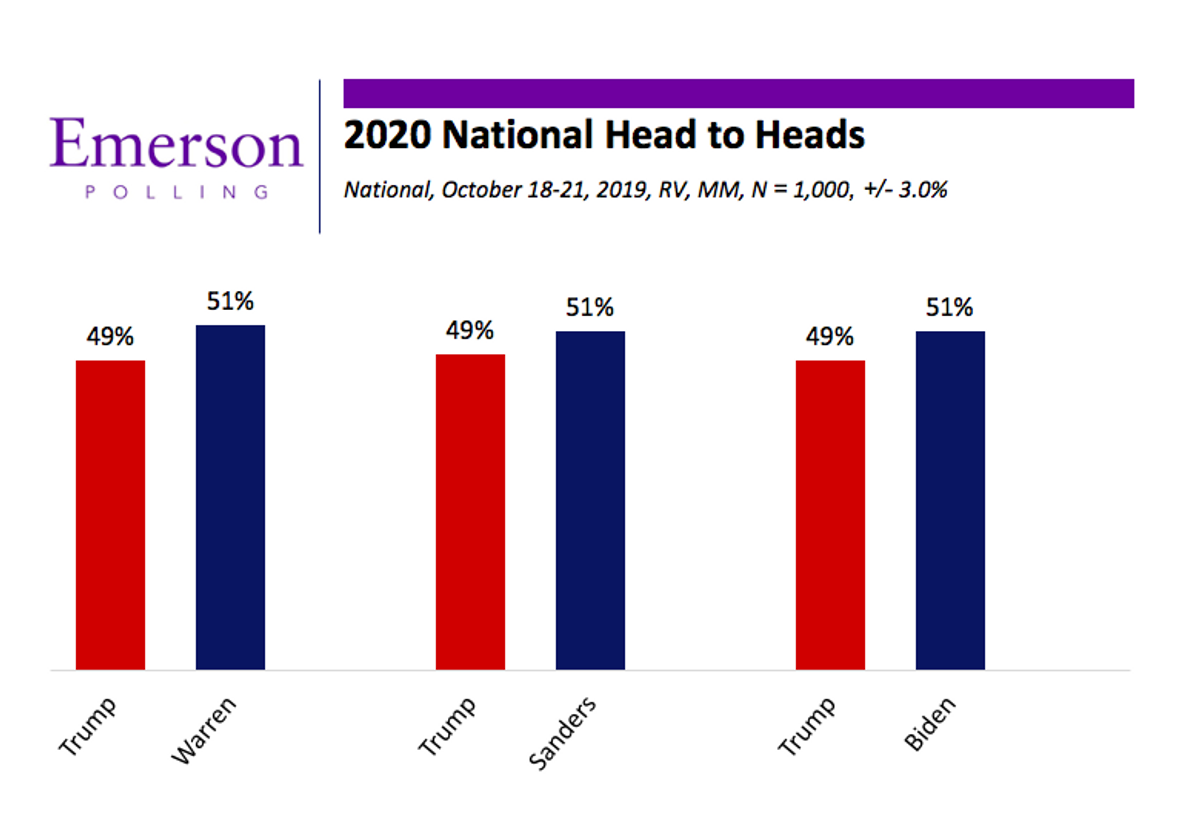 Voters are split on the Trump administration's decision to withdraw American troops in Syria with 40% in support, 39% oppose, 20% were unsure, while  2% had never heard of the issue.

The National Emerson College poll was conducted October 18-21, 2019 under the Supervision of Emerson Polling Director and Assistant Professor Spencer Kimball. The sample consisted of registered voters, n=1000, with a Credibility Interval (CI) similar to a poll’s margin of error (MOE) of +/- 3 percentage points. The data was weighted by region, gender, age, race and mode based on 2016 turnout modeling. It is important to remember that subsets based on gender, age, party breakdown, ethnicity and region carry with them higher margins of error, as the sample size is reduced. Data was collected using both an Interactive Voice Response (IVR) system of landlines only (n=655) and an online panel provided by Amazon Turk (n=345). 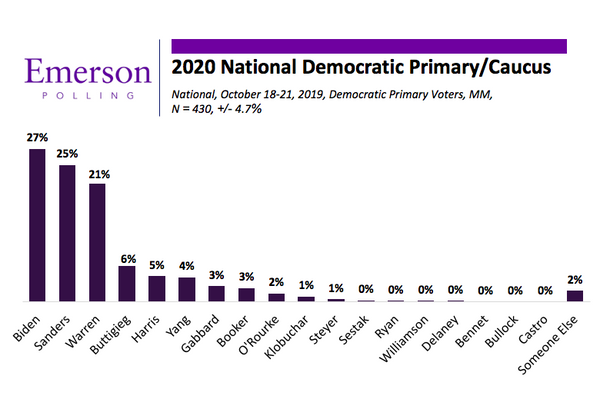 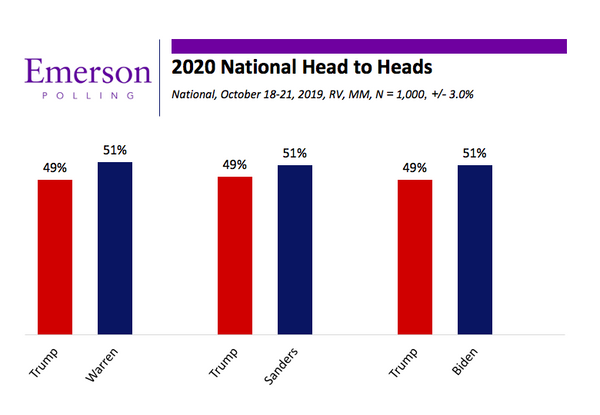