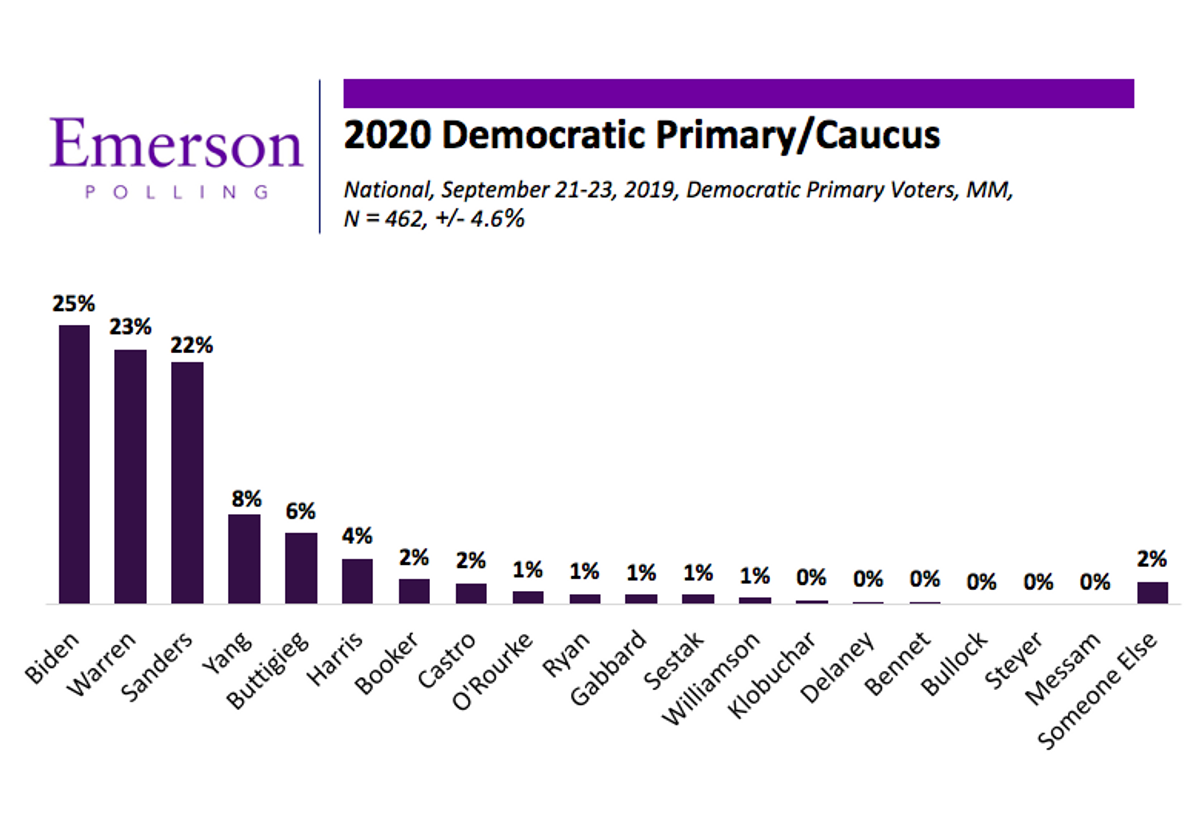 Despite accusations of abuse of power and potential impeachment proceedings, President Trump's overall approval has hit his highest point since February 2017 with a 48% approval and 47% disapproval - up from August where the President had an approval rating of 43% and disapproval rating of 52%. In the poll, voters do not support war with Iran, with 66% saying the US should not go to war with Iran, while only 12% support such action. Professor Spencer Kimball, Director of Emerson Polling, notes, “Perhaps, the President’s increased popularity nationally is a result of his reluctance to translate his administration’s hawkish rhetoric into the belligerent reality of war.”

Biden appears to have lost support as well in the general election; he has dropped 7 points in his head-to-head against Trump, now statistically tied at 50% to 49%. Warren’s numbers have improved against Trump, from being tied in the last poll, to a 51% to 49% two-point advantage now. Warren polled best among Democrats in this month’s head to head match-ups with Trump. (n=1,019, +/-3%) 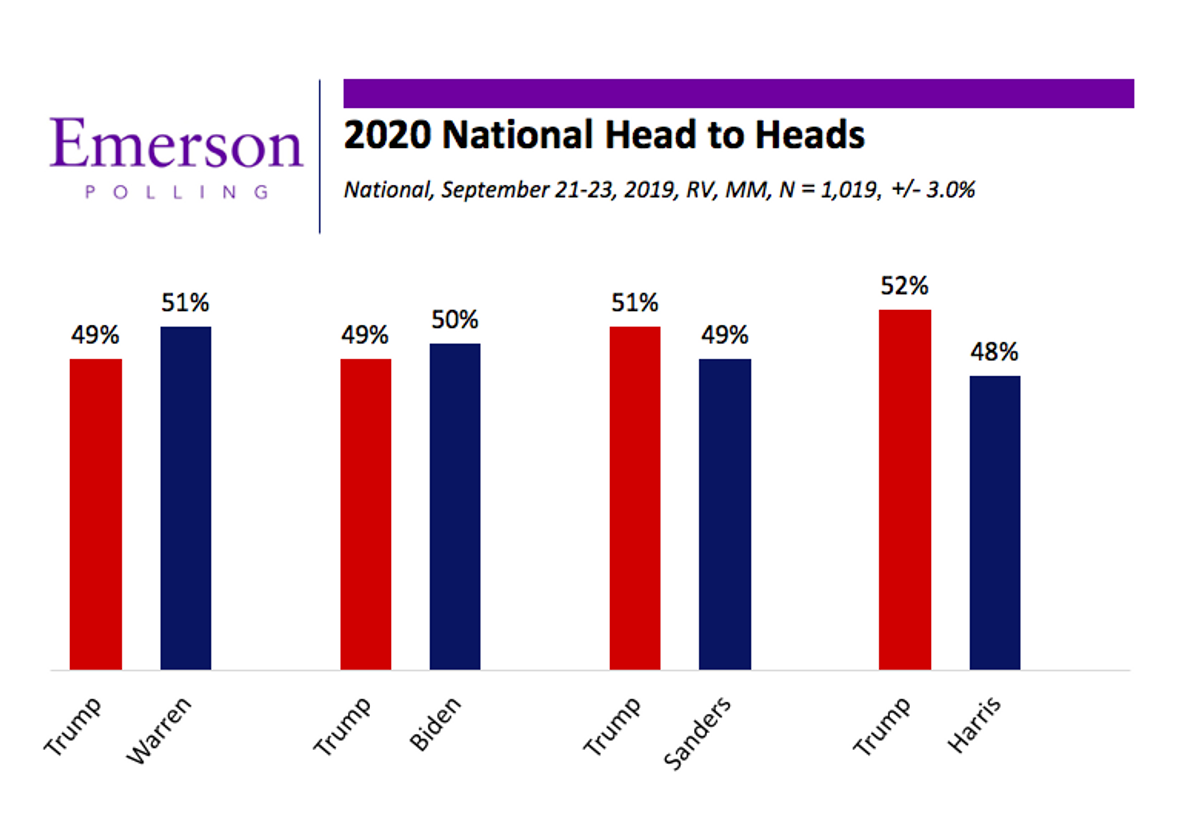 The most important issue for voters in deciding their vote for President is the economy at 34%, followed closely by healthcare at 19%. Immigration is at 12%, along with social issues and the environment at 6%.

Voters attitudes toward e-cigarette/vaping use as a public health problem has slightly increased in the last 6 months, with currently 75% of voters say vaping is a somewhat or very serious health problem, up from 73% in Emerson’s March National Poll.

Voters were asked who would they rather have as Speaker of the House, Nancy Pelosi or Alexandria Ocasio-Cortez: 64% prefer Pelosi as compared to 36% opting for Ocasio-Cortez. Pelosi had greater support from all voters regardless of party affiliation.

Voters do not appear interested in repealing the 22nd amendment, limiting a U.S. president to a maximum of two 4 year terms, with 68% opposed and 17% in support. Republicans were slightly more open to the idea with 29% support, while only 13% of Democrats and 8% of Independents supported repeal.

A split-half sample was conducted to test the semantics of support for a carbon tax vs. a financial fine for carbon pollution. The questions garnered significantly different results.

Professor Spencer Kimball explains: “this data suggests that the word choice influences voter attitude about a proposed policy. In this case, instead of talking about a carbon tax, candidates should refer to a financial fine, in order to lead to greater acceptance of the policy; of course, opponents of the policy should describe such action as a tax.”

The September National Emerson College poll was conducted September 21-23, 2019 under the Supervision of Emerson Polling Director Assistant Professor Spencer Kimball. The sample consisted of registered voters, n=1,019, with a Credibility Interval (CI) similar to a poll’s margin of error (MOE) of +/- 3 percentage points. The data was weighted by ethnicity, age, mode, gender, region based on 2016 turnout modeling. It is important to remember that subsets based on gender, age, party breakdown, ethnicity and region carry with them higher margins of error, as the sample size is reduced. Data was collected using both an Interactive Voice Response (IVR) system of landlines only (n=667) and an online panel provided by Amazon Turk (n=352). 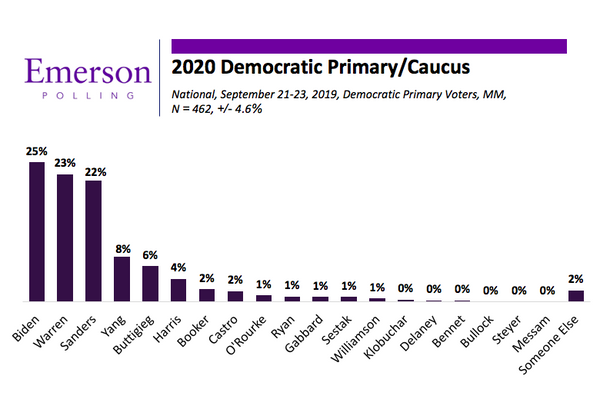 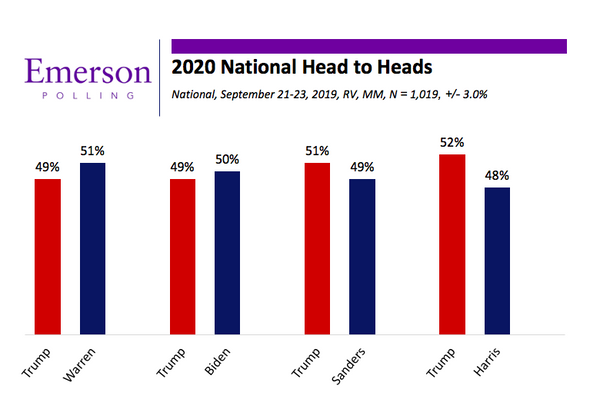