A new Emerson Poll in North Carolina finds President Trump’s popularity underwater, with 52% disapproval and 41% approval (May 31-June 3, +/-3.1%). Trump received 50% of the vote to Clinton’s 46% in 2016, carrying the Tar Heel State and its 15 electoral votes. While the President remains popular within the Republican Party - Trump leads former Massachusetts Gov. Bill Weld 88% to 12%- the President is tied or trailing against four of the top five Democratic opponents, faring the worst against former Vice-President Joe Biden, who is ahead of Trump 56% to 44%. 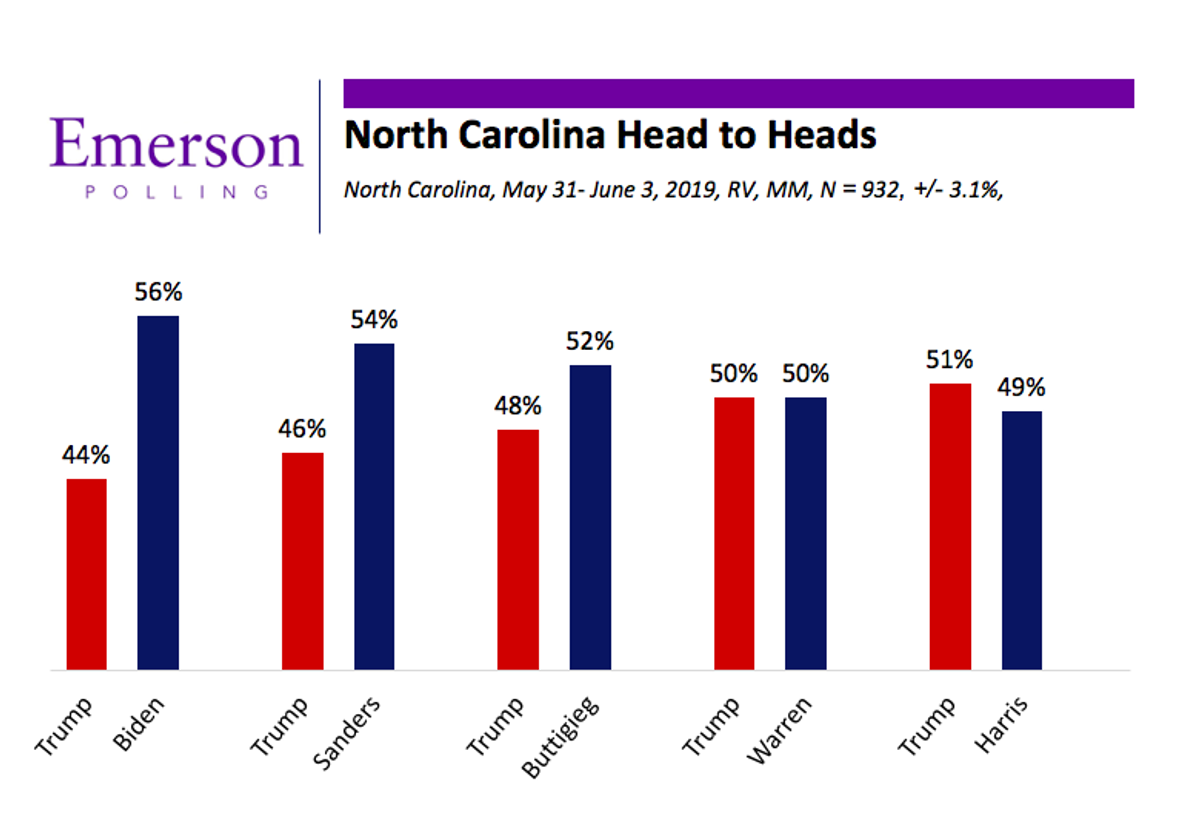 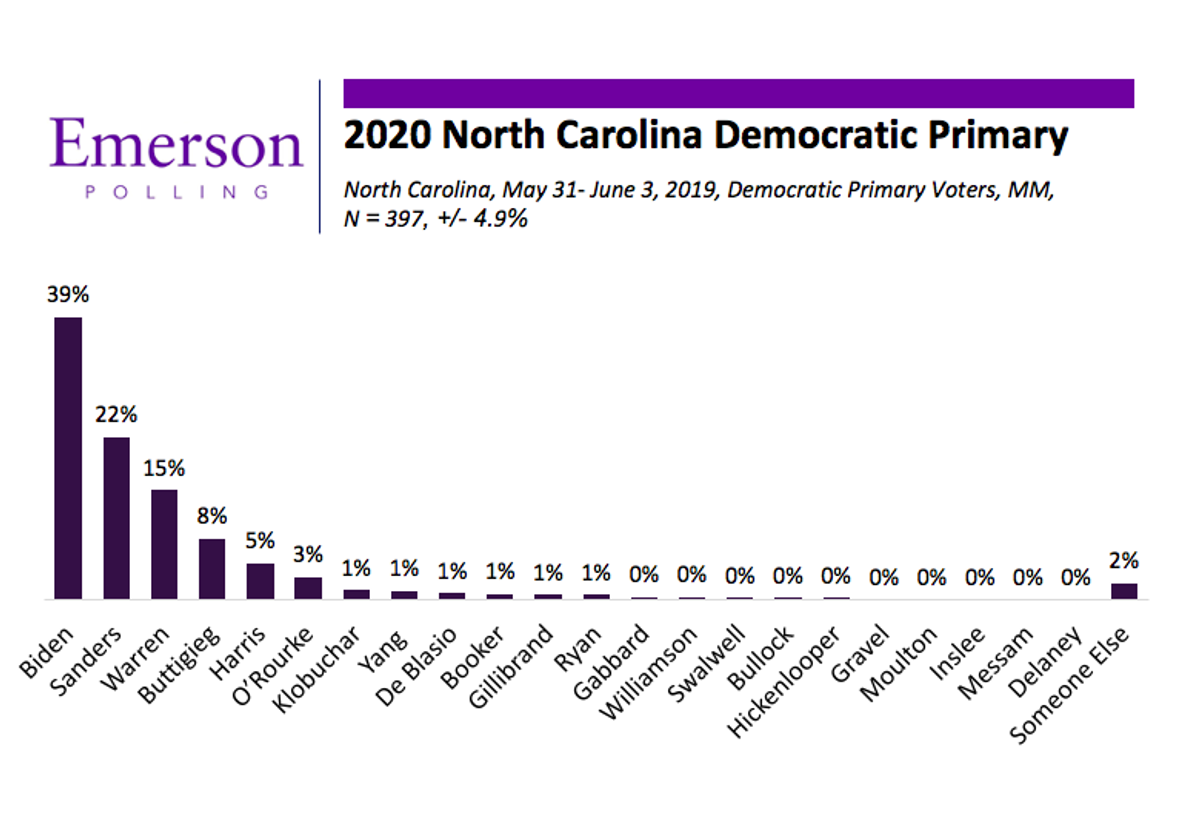 Spencer Kimball, Director of Emerson Polling explained, “a trend of Biden and Sanders primary voters is beginning to emerge: among other variables, a Biden voter is more likely to be a registered Democrat as compared to the Sanders voter who is more likely to be Independent.” Kimball adds, “if this trend holds, those states that have closed primary/caucuses will present a distinct advantage for Biden, as Independents won’t be able to vote in those contests”.

Democratic primary voters are still open to a different candidate, with 62% saying there’s a chance they could change their mind and vote for someone else. Among individual candidates, 53% of Biden voters and 41% of Sanders voters said they will definitely vote for those candidates. Conversely, 80% of Warren voters and 88% of Buttigieg voters said they could change their minds. 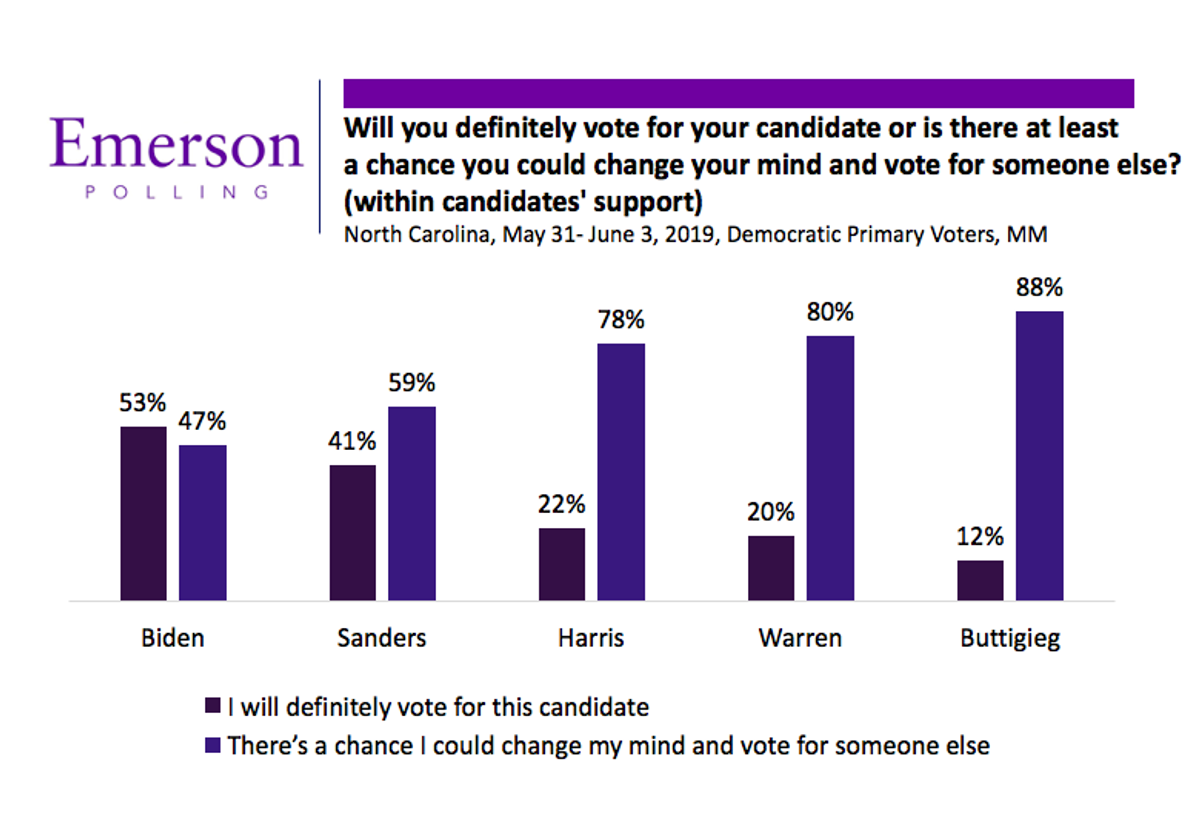 Among Democratic primary voters, healthcare (27%) and social issues (23%) are most important followed by the economy (16%) and the environment (14%). For Republican Primary voters, 46% said the economy, followed by immigration (24%) which was the only other issue in double digits. Among just general election voters economy (36%), healthcare (20%), immigration (10%) and the environment (8%) round out the top 4 issues.

Kimball explains “this data suggests that if the election comes down to issues, the Democratic Presidential candidate might have a more difficult time crafting a general election message, as both Republicans and Independents rank the economy as the most important issue, while Democratic voters rank it third behind healthcare and social issues”.

When asked about recent abortion legislation in the states of Alabama, Georgia, and Missouri, a majority of voters (56%) oppose North Carolina passing similar restrictions, with 32% supporting such legislation. 12% of voters are unsure on the subject. Republicans buck the trend with 56% in support of similar legislation, while 29% of Independents and 14% of Democrats support similar legislation. There is no difference based on gender.

On international relations, a majority of voters (51%) oppose sending troops to Iran, with 17% supporting sending troops, and 32% unsure on this issue. There is little support for troop intervention at the present time, with Democrats and Independents opposing sending troops by 6 to 1. Republicans are split, with 30% in support and 27% opposed, 42% are undecided on sending the troops to Iran question.

Voters are generally in support of the 2020 Republican Convention being held in Charlotte, with 43% approval, 18% disapproval, and 38% unsure. While Republicans approve 72% to 5% and Independents approve 44% to 15%, Democrats disapprove 33% to 19%. Those in the 12th Congressional district, located in the city of Charlotte and surrounding areas, are the least excited region within the state about the convention: 41% disapproving and 28% approving of the location site.

Republican Senator Thom Tillis appears to be in a vulnerable position facing re-election against potential Democratic Opponent, State Senator Erica Smith, who leads Tillis 46% to 39%, with 15% of voters undecided.

The North Carolina Statewide Emerson College poll was conducted May 31-June 3, 2019 under the Supervision of Professor Spencer Kimball. The sample consisted of registered voters, n=932, with a Credibility Interval (CI) similar to a poll’s margin of error (MOE) of +/- 3.1 percentage points. The data was weighted by gender, party, ethnicity, education,region, and age based on 2016 voter model. It is important to remember that subsets based on gender, age, party breakdown, ethnicity and region carry with them higher margins of error, as the sample size is reduced. Data was collected using both an Interactive Voice Response (IVR) system of landlines only (n=527) and an online panel provided by Amazon Turk (n=405). Visit our website at ​www.emersonpolling.com​. 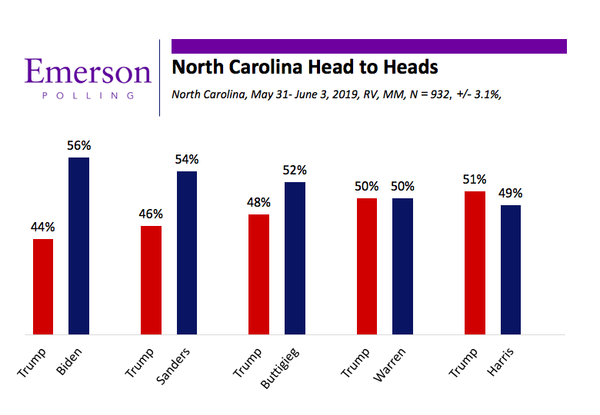 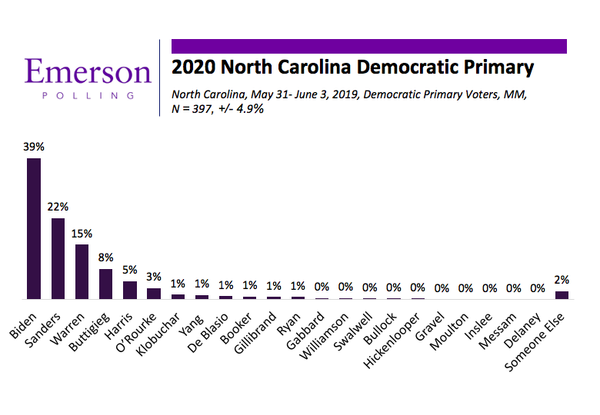 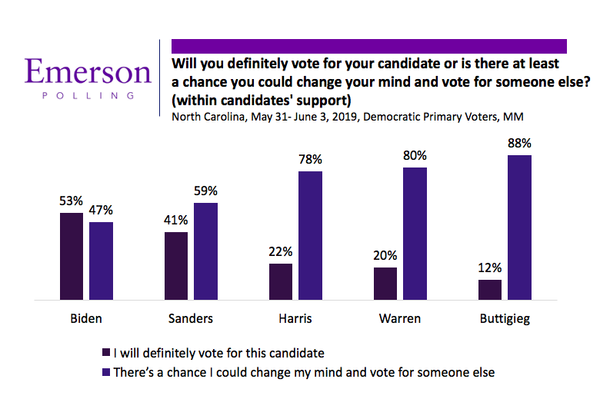