A set of tracking polls conducted by Emerson College/WPIX-TV/NewsNation finds that Governor Cuomo's apology at Wednesday's press conference got mixed reactions from voters: 41% believe he meant his apology, and 41% believe he did not mean it; 18% were not aware of his apology. 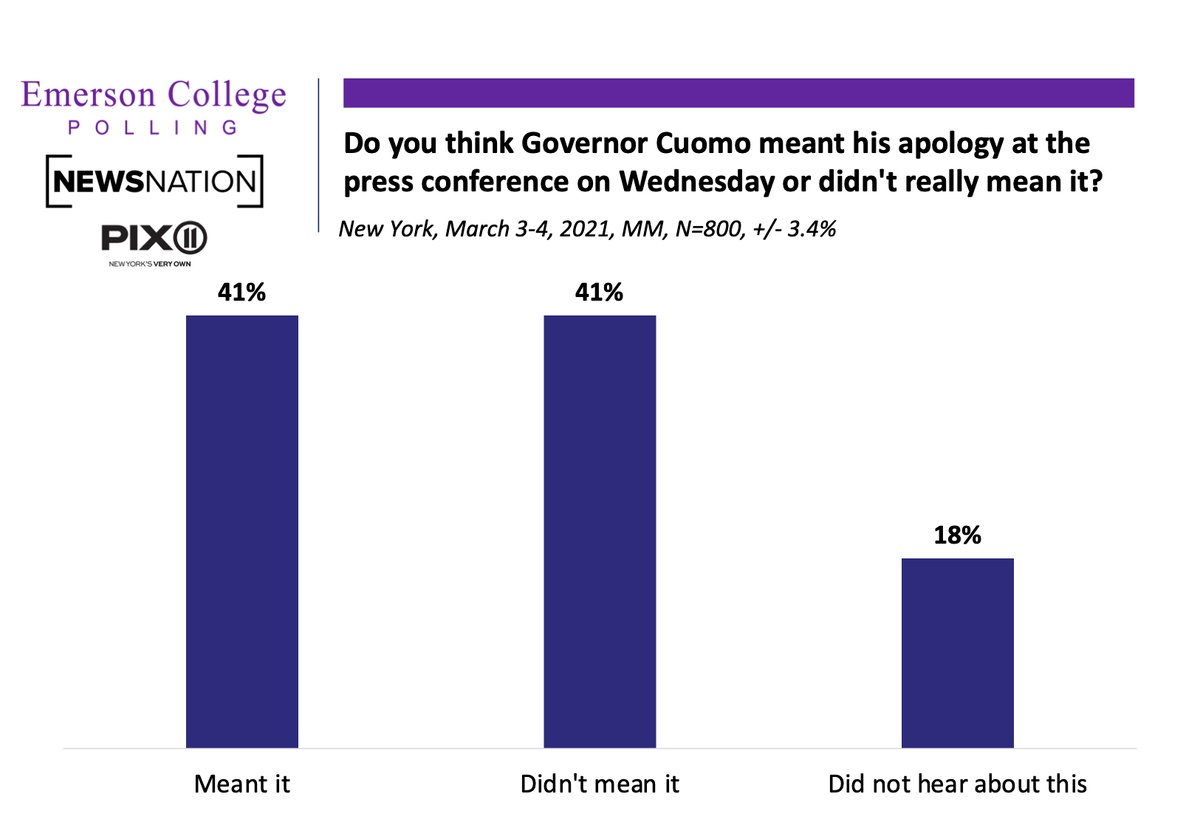 Spencer Kimball, Director of Emerson College Polling suggests that “Cuomo’s apology was not effective, as voters were less satisfied with Governor Cuomo’s response after the press conference than before: 49% were disappointed with his response on the issue, currently, up from 42% earlier in the week.”

In fact, a majority (54%) of New York voters now think Governor Cuomo did sexually harass his former staffers. Prior to his apology, only 38% held this view. There was little change in how many voters believe that Cuomo did not do it, only moving from 18% to 19% in the course of one week. 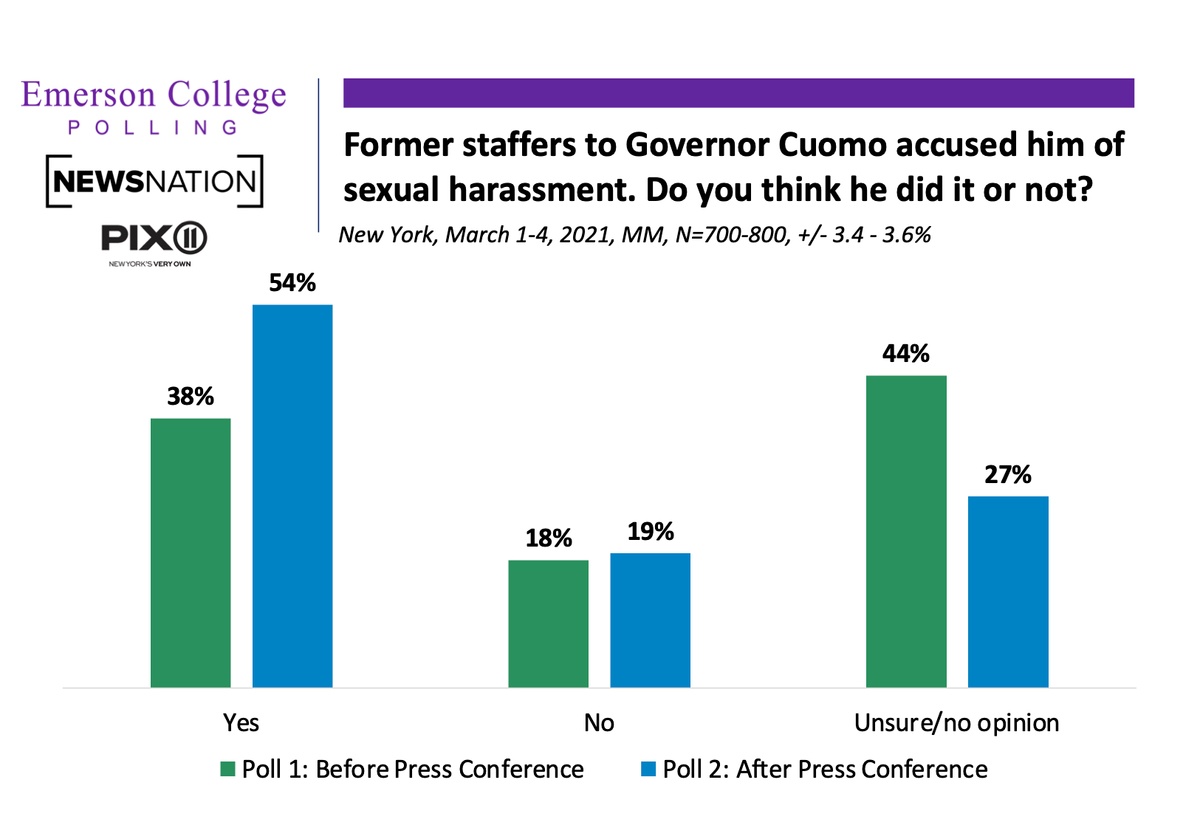 Furthermore, 43% of New York voters now think Cuomo should resign, as compared to earlier in the week when 37% held this view.. The percentage of those who wanted the Governor to stay in office remained the same with 34% saying he should not resign over the sexual harassment allegations.

With the increased awareness of the sexual harassment accusations, there appears to be a slight decrease in awareness of the nursing home deaths, with a 3 point drop (62% to 59%) in voters' knowledge on this issue. However, voters have maintained a similar attitude from earlier in the week, with 44% saying Cuomo should resign over the nursing home issue, compared to 45% earlier in the week. The percentage of voters saying he should not resign over the issue stayed at 36% in both polls.

Voters appear increasingly concerned that these issues of sexual harassment and mishandling of the nursing home data will impact Governor Cuomo’s ability to govern. Earlier in the week, 39% believed it would have an impact on his governing, compared to 46% currently.

Another sign of the Governor’s struggles is that only a third (33%) of voters would re-elect him as governor in 2022. This is down from 36% who wanted to re-elect him earlier in the week.

A majority of respondents have a favorable view of President Biden, with 53% approving of his job performance, up one percentage point from earlier in the week. Thirty-four percent (34%) reported they disapprove of the President’s job performance, and 14% were unsure or held no opinion.

The New York Emerson College/WPIX-TV/NewsNation poll was conducted March 3-4, 2021. The sample consisted of New York registered voters, n=800, with a Credibility Interval (CI) similar to a poll’s margin of error (MOE) of +/- 3.4 percentage points. The data sets were weighted by gender, age, education, race, party affiliation, and region. It is important to remember that subsets based on gender, age, party breakdown, ethnicity, and region carry with them higher margins of error, as the sample size is reduced. Data was collected using an Interactive Voice Response (IVR) system of landlines, SMS-to-web, and an online panel provided by CloudResearch. 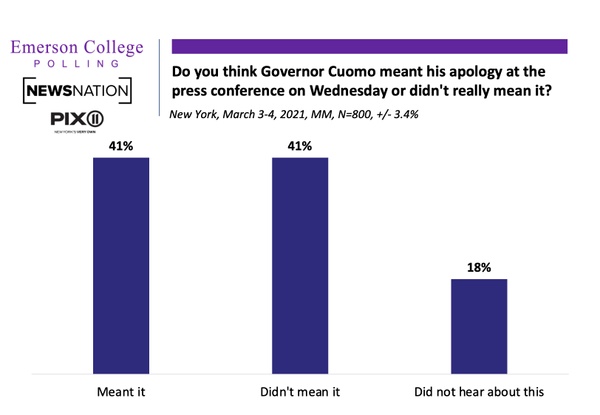 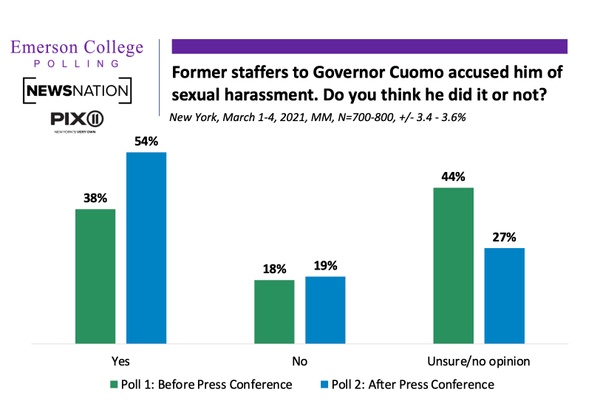