A new Emerson College poll finds former Vice President Joe Biden with a lead in the Democratic primary in Nevada with 30%, followed by Senator Elizabeth Warren at 22% and Senator Bernie Sanders at 19%. No other candidate clears 10%. Compared to Emerson’s last poll of the state in March, Biden has extended his lead, gaining 4% from the 26% he had in the earlier poll. Warren has increased her lead by 12 points since March, while Sanders and Harris fell four points, and Buttigieg stayed the same. n=451, +/-4.6) 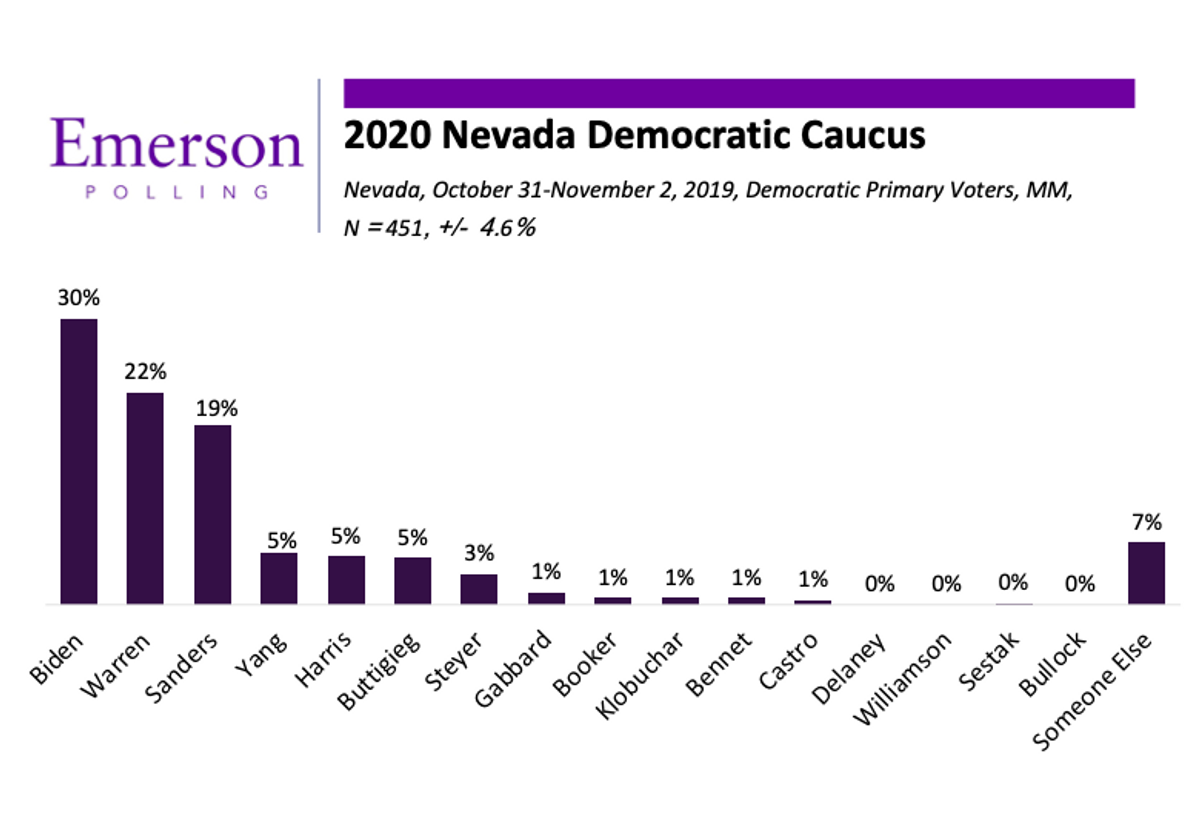 Spencer Kimball, Director of Emerson Polling, concludes: “It is important for Biden to maintain his support in Nevada since polling shows him with some trouble in Iowa and New Hampshire. As Nevada is the third state in the nomination process, Biden needs a firewall there or in South Carolina if he struggles in the first two contests in order to propel him on to Super Tuesday on March 3.”

The majority of Democrats in Nevada were opposed to Secretary Hillary Clinton running again in 2020: Sixty-seven percent are opposed to her running as compared to 23% who support her presidential bid. 10% were unsure.

The plurality of Nevadans (36%) approve of the job Democratic Governor Steve Sisolak is doing as opposed to 31% who disapprove, and 28% have no opinion.

In head-to-head matchups with the top 3 Democratic candidates, Trump ties Sanders at 50% each, but slightly leads Biden and Warren with 51% to 49% each. 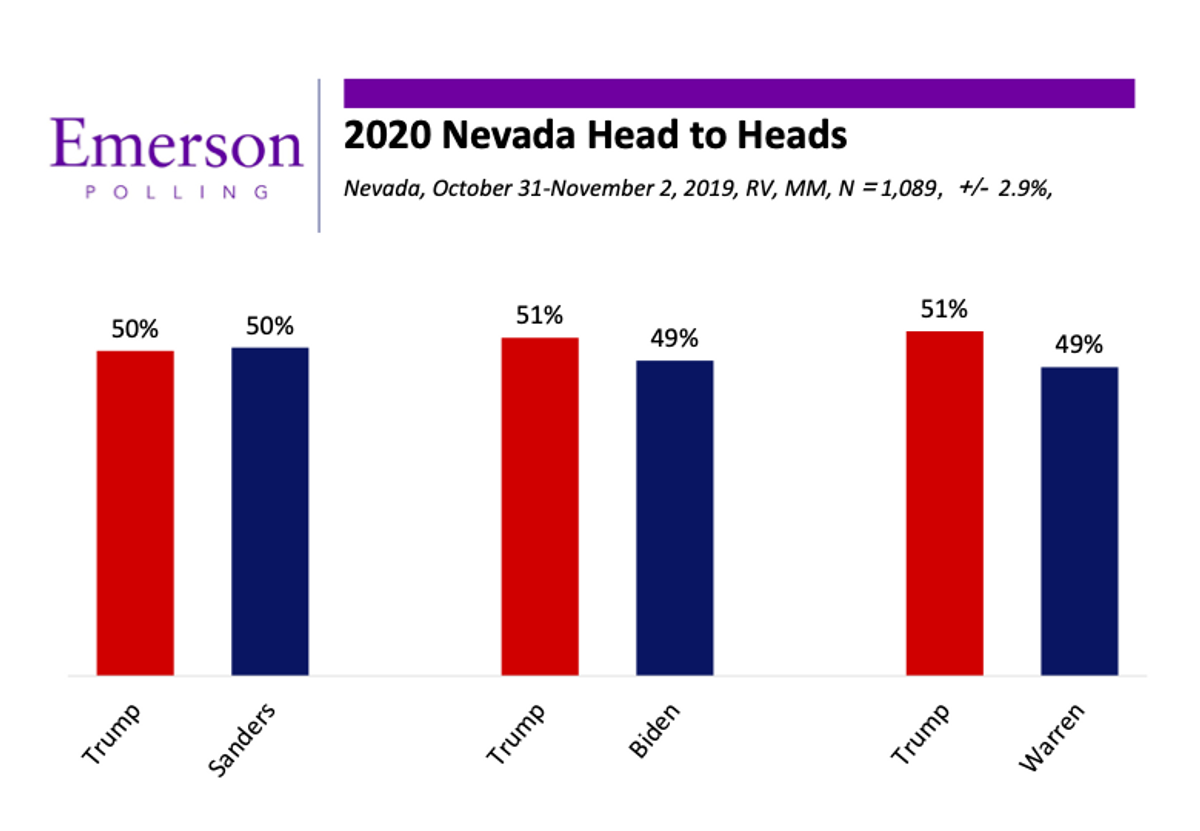 When asked what health care policy they support most, Medicare for All was the most popular option for Nevada voters at 28%, followed by keeping things as they are, and a public option, both at 23%. 15% of voters want something else, and 12% say they are unsure. Medicare for All is the leading option for both Democrats (44%) and Independents (27%), while a plurality of Republicans (34%) want to keep things as they are.

A plurality of voters (32%) chose the economy as their most important issue impacting their vote for President, followed by health care (16%), immigration (12%), and social issues (12%). Impeachment and the environment rank next at 8% each.

There will be a ballot initiative in Nevada in 2020 that will require utilities to get 50 percent of their electricity from renewable sources. When asked about this proposal, 50% were in support, 25% in opposition and 25% were unsure. Sixty-two percent of Democrats are in support, compared to 32% of Republicans and 55% of Independents.

The Nevada Emerson College poll was conducted October 31-November 2, 2019 under the Supervision of Assistant Professor Spencer Kimball. The sample consisted of registered voters, n=1,089, with a Credibility Interval (CI) similar to a poll’s margin of error (MOE) of +/- 2.9 percentage points. The data was weighted based on 2016 voter model of gender, party, age, ethnicity, age, and region. It is important to remember that subsets based on gender, age, party breakdown, ethnicity and region carry with them higher margins of error, as the sample size is reduced. Data was collected using both an Interactive Voice Response (IVR) system of landlines only (n=702) and an online panel provided by Amazon Turk (n=195) and Dynata (n=191). 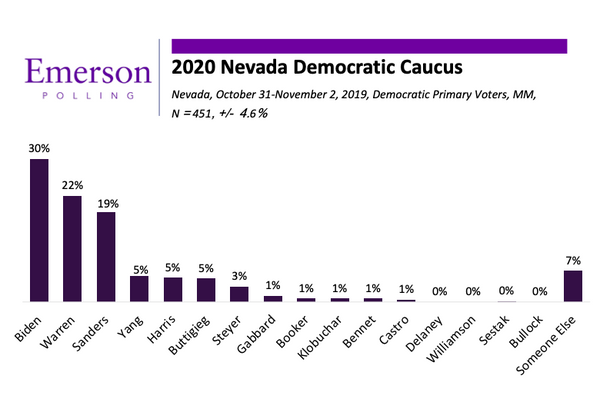 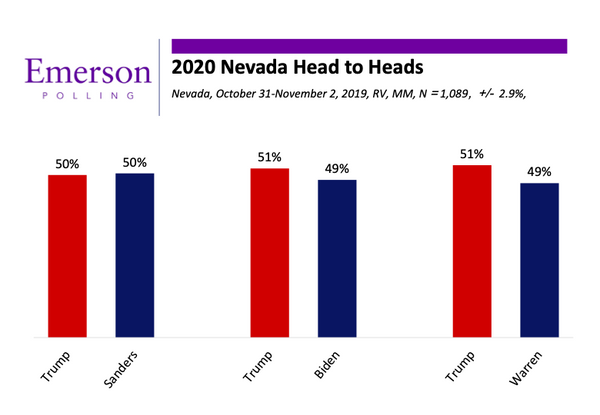