The first Emerson Poll in Massachusetts of the 2020 primary finds Vermont Senator Bernie Sanders with 26% of the vote in the Democratic field, followed by former Vice President Joe Biden at 23%, Massachusetts Senator Elizabeth Warren at 14%, Mayor of South Bend Pete Buttigieg at 11%, former Texas Congressman Beto O’Rourke at 8%, and California Senator Kamala Harris at 7%. 5% of voters are looking for another candidate. (April 4-7, n=371, +/- 5%). 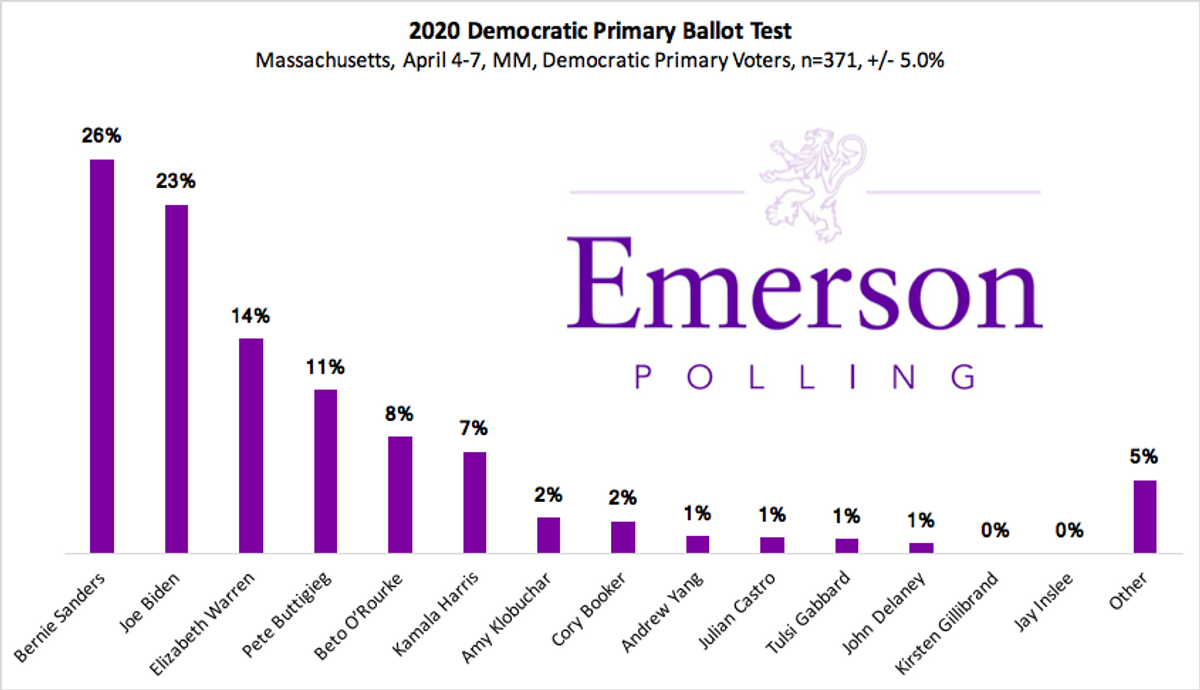 According to Spencer Kimball, Director of Emerson Polling, “this is a concern for Warren who at this time does not have a firewall in her home state, and her rival Sanders has a strong base in the Bay State.”

Of those who supported Sanders in the 2016 primary, about 45% plan to support him in 2020. In the 2016 primary in Massachusetts, he captured almost 48% of the Democratic vote against Hillary Clinton.

There continues to be a growing age divide among Democrats, with younger voters breaking for Sanders, and older voters breaking for Biden. Those 18-29 break for Sanders 52%, 15% for O’Rourke, and 10% each for Biden and Warren. Voters between the ages of 30-49 lean towards Sanders and Warren, receiving 27% and 22% respectively. Meanwhile 30% of voters in the age range of 50-64 favor Biden, Warren and Sanders follow with 14% and 13% respectively. Biden is most popular among voters over the age of 65, with the former Vice President receiving 33% of their vote. Mayor Pete follows with 16% of the vote and Sanders with 14%.

Based on this data, Kimball adds, “This poll continues a trend we have seen over the last month with Mayor Pete becoming increasingly relevant in the Democratic primary with 11% of the vote, just 3 points behind Senator Warren. This finding is similar to the results of the Emerson poll conducted a few weeks earlier in Iowa, but higher than the latest polls in Nevada and Pennsylvania, where Mayor Pete had 5% and 6% of the vote.”

President Trump is very popular within the Republican party in Massachusetts, leading former Massachusetts Governor Bill Weld 82% to 18% (n=183, +/- 7.2%). Kimball explains, “The Massachusetts Republican primary voters were earlier supporters of Trump in the 2016 primary. Emerson Polling showed Trump well ahead by Oct. of 2015, a lead he maintained through the primary in March of 2016 which the President won by nearly 30 points.” 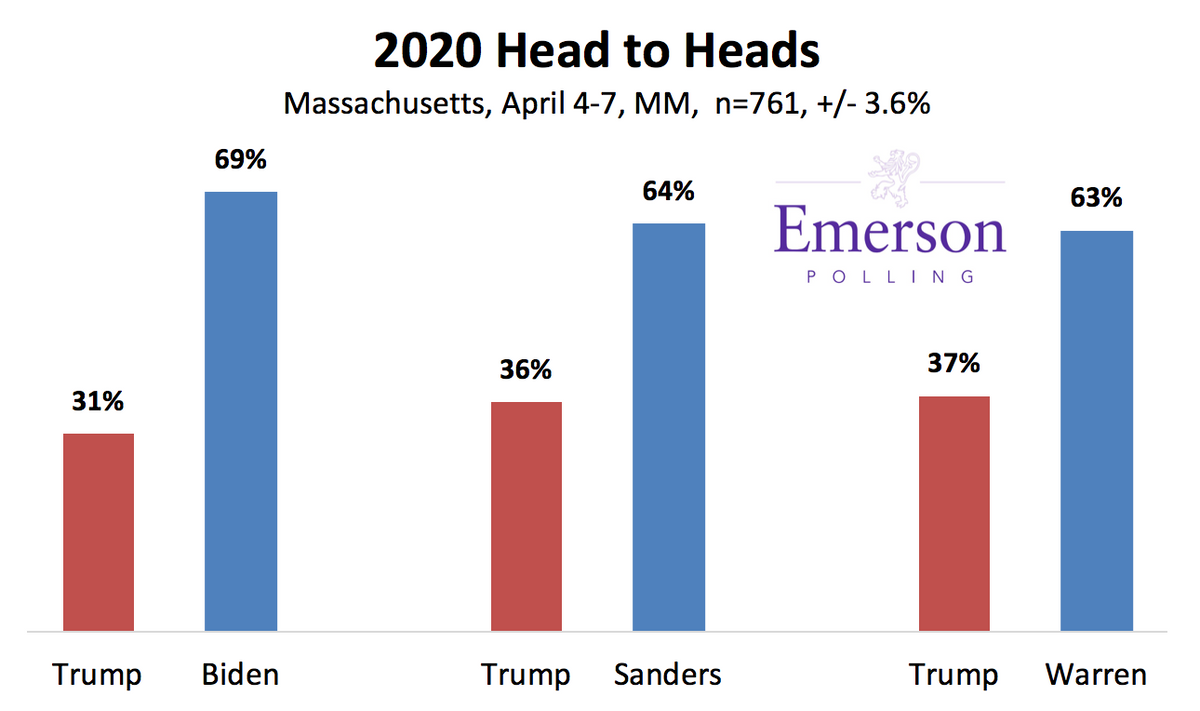 42% favor lifting the requirement for a female, aged 17 years or younger, to get permission from her parents, guardian or a superior court judge before obtaining an abortion, 39% oppose lifting this requirement, with 20% unsure. While there wasn’t a significant difference between males and females on this question, there was a significant difference by party affiliation. A majority of Democrats support lifting the requirement (50% to 34%), and a majority of Republicans (55%) oppose lifting it. Independents were split, with 39% in support and 39% in opposition.

In 2018, the state of Massachusetts passed an Alzheimer’s law that requires training and disclosure requirements for doctors and nurses. A majority of voters approve of the new policy, with a rate of 65% approval and 11% disapproval. 24% of voters had no opinion. Among those polled, 56% know someone with Alzheimer’s or Dementia.

The personal impact of Alzheimer's on the population is evident, with over one in four (27%) of voters saying they have been unpaid caregivers for individuals with Dementia or Alzheimer's.

When asked if the Commonwealth was giving enough support for this disease, 72% agreed there should be more support, compared to 11% who felt there was currently enough support.

The type of support most sought after by unpaid caregivers is in-person trainings at 31%, followed by 16% who want in-person support groups, 12% who desire help call-in lines, and who favor 11% online training. 31% of those polled said they would like something else.

The Massachusetts statewide Emerson College poll was conducted April 4-7, 2019. The sample consisted of registered voters, n=761, with a Credibility Interval (CI) similar to a poll’s margin of error (MOE) of +/- 3.5 percentage points. The data was weighted based on 2016 voter model, gender, education, ethnicity, party, and region. It is important to remember that subsets based on gender, age, party breakdown, ethnicity, and region carry with them higher margins of error, as the sample size is reduced. Data was collected using both an Interactive Voice Response (IVR) system of landlines only (n=545) and an online panel provided by Amazon Turk (n=216). 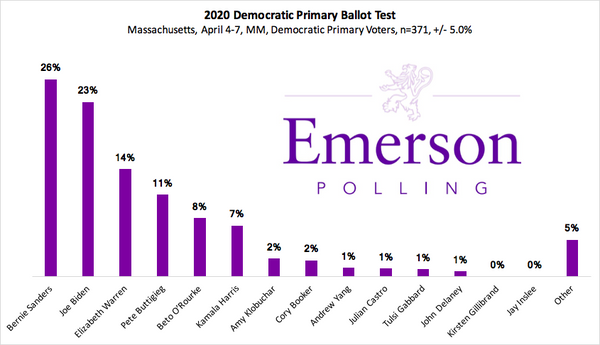 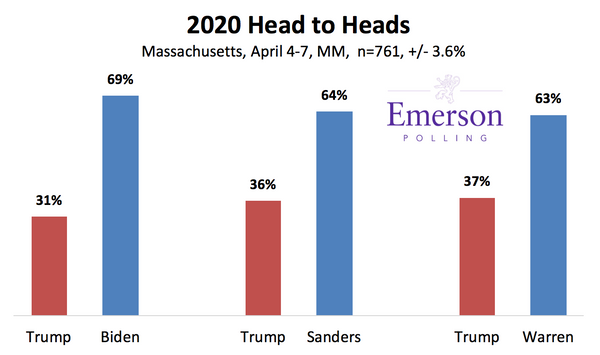