In Emerson’s second poll of the Iowa caucus, former Vice President Joe Biden narrowly leads the Democratic field with 25%, followed by Vermont Senator Bernie Sanders at 24%. Mayor Pete Buttigieg of South Bend, Indiana has surged to 11%. Senator Kamala Harris of California follows with 10% - the only other candidate to clear double digits in Iowa. Data was collected between March 21-24, and the Democratic caucus ballot test had a margin of error +/- 6.2%

Spencer Kimball, Director of the Emerson Poll concludes that “the biggest surprise in this poll is Mayor Pete, last week we saw him inching up in our national poll, and now he’s in double digits in Iowa, America is going to be asking who is ‘Mayor Pete’?” In Emerson’s January Iowa poll, prior to many candidates’ announcements, Biden led with 29%, followed by Harris,who had made her announcement just prior to the poll, at 18%, and Sanders, who had not yet formally declared, at 15%. Mayor Pete Buttigieg was polling at 0%. 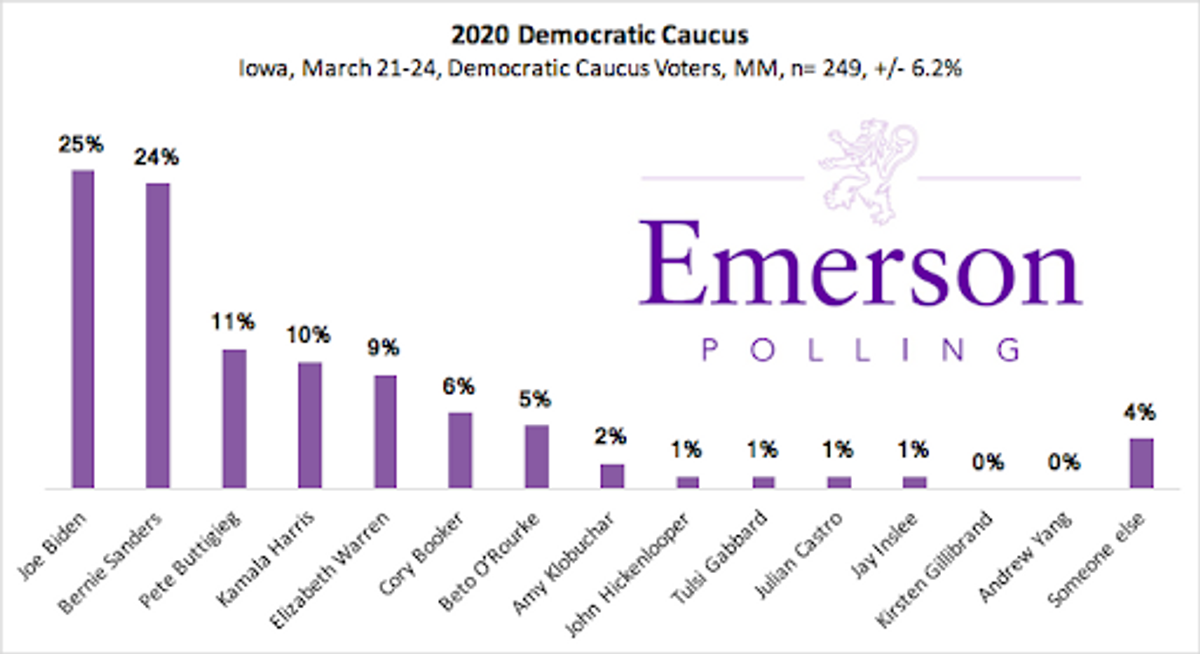 Sanders maintains a lead among 18-29 year olds with 44%, followed by Buttigieg with 22%. Biden leads among all other age groups with 32% support among 30-49 year olds, 29% among 50-64 year olds, and 31% among those 65 years or older. Kimball notes that, “If Buttigieg is able to maintain his momentum, his candidacy appears to be pulling from the same demographic of young voters as Sanders, and that could become a problem for Sanders.”

President Trump is in a comfortable position for re-election as the Republican party’s nominee in Iowa, with 90% of voters indicating that they would support him over former Massachusetts Governor Bill Weld, who received 10%. In a head-to-head matchup between President Trump and Michael Bloomberg, President Trump had a larger lead of 92% to 7% among Republican caucus-goers. (sample size n=207, +/-6.9%). However, Trump's approval in the state has worsened to 42% approve/51% disapprove in comparison to Emerson's February poll that had 46% approve/48% disapprove.

When looking at potential general election matchups, all are within margin of error, except for Trump against Harris, where the President leads 54% to 46% to Harris. Sanders and Biden are the only Democratic contenders in Iowa to receive more support than the President; Biden has a 6 point advantage, and Sanders has a 2 point advantage. (sample size n=707, +/-3.6%) 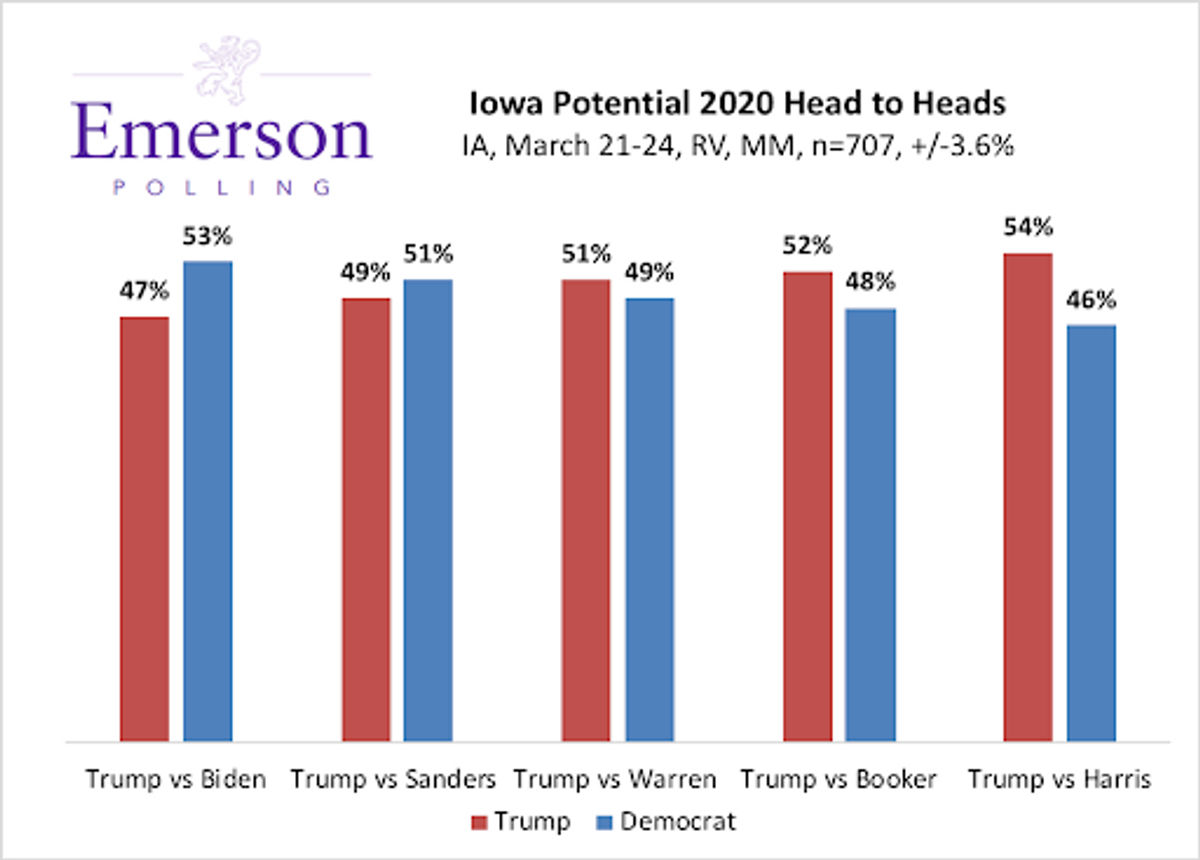 In 1992, Joe Biden was the Senate Judiciary Committee chairman during Clarence Thomas’ nomination to the Supreme Court. Biden played a prominent role in Anita Hill’s testimony, when she accused Justice Thomas of sexual harassment. Recently, some have criticized Biden’s actions during the testimony. When asked about this issue, 36% of voters in Iowa said they disapproved of the way that Joe Biden handled the Anita Hill hearings in 1992, while 16% approved. 33% of voters said they were neutral or had no opinion, and 16% had never heard of the Anita Hill hearings. Looking solely at Democratic caucus-goers, 21% approve of the way he handled the hearing, 25% disapprove, 42% are neutral, and 12% have never heard of the hearings. 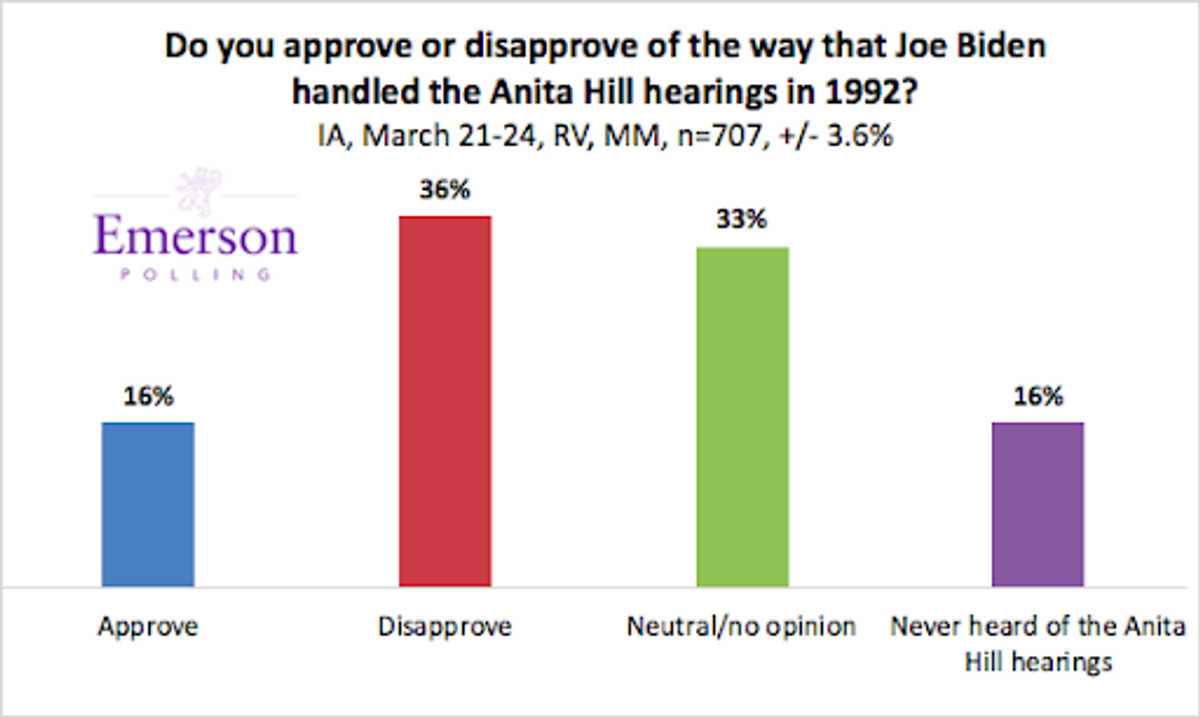 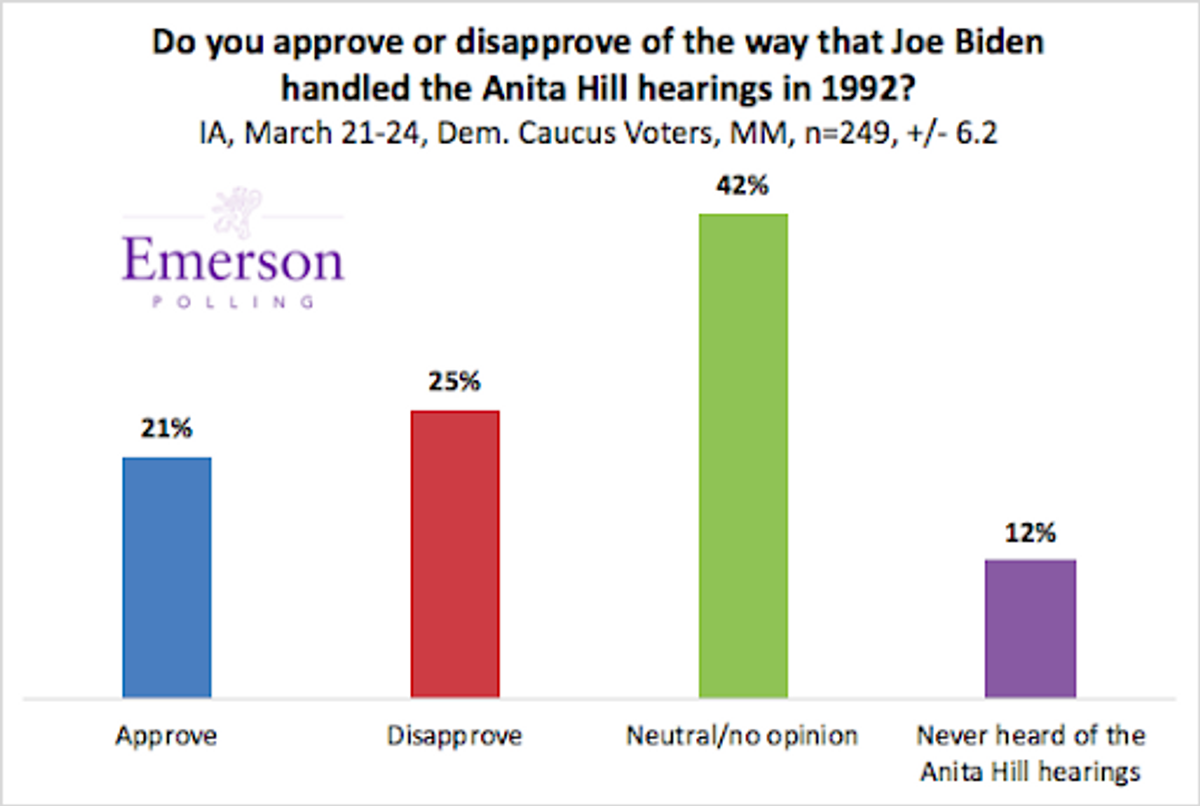 The Iowa statewide Emerson College poll was conducted March 21-24, 2019. The sample consisted of registered voters, n=707, with a Credibility Interval (CI) similar to a poll’s margin of error (MOE) of +/- 3.6 percentage points. The data was weighted based on 2016 voter model, age, gender, and region. It is important to remember that subsets based on gender, age, party breakdown, ethnicity and region carry with them higher margins of error, as the sample size is reduced. Data was collected using both an Interactive Voice Response (IVR) system of landlines only (n=424) and an online panel provided by Dynata (n=283). www.emersonpolling.com 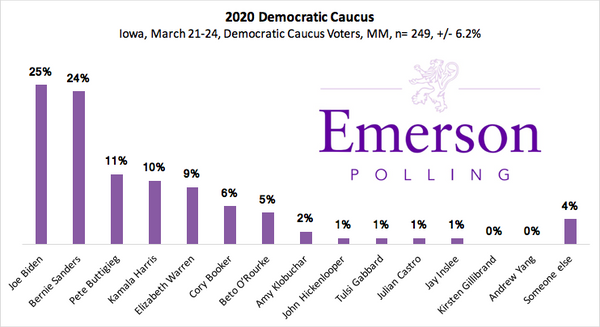 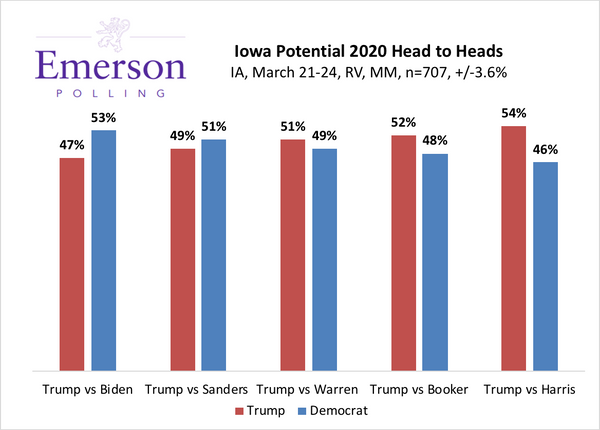 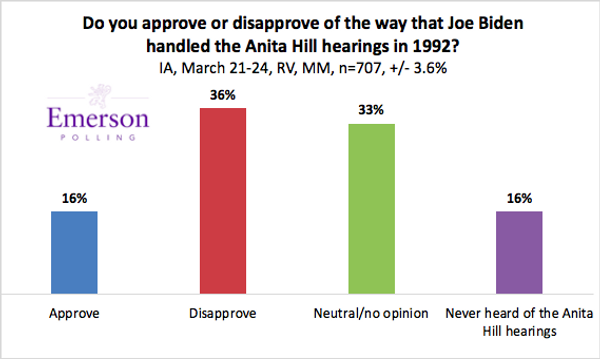 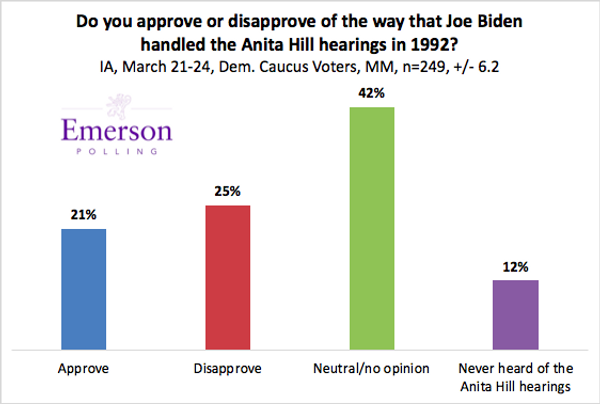