As coronavirus cases continue to grow across the country, the November presidential election appears to be unchanged, as former V.P. Joe Biden holds a four-point lead over President Trump –– 50% to 46%. (n=964, +/-3.1%, likely voters). This is the same magnitude as June’s national poll, where Biden led Trump 47% to 43%. Since June, the number of undecided voters has declined from 10% to 4%. 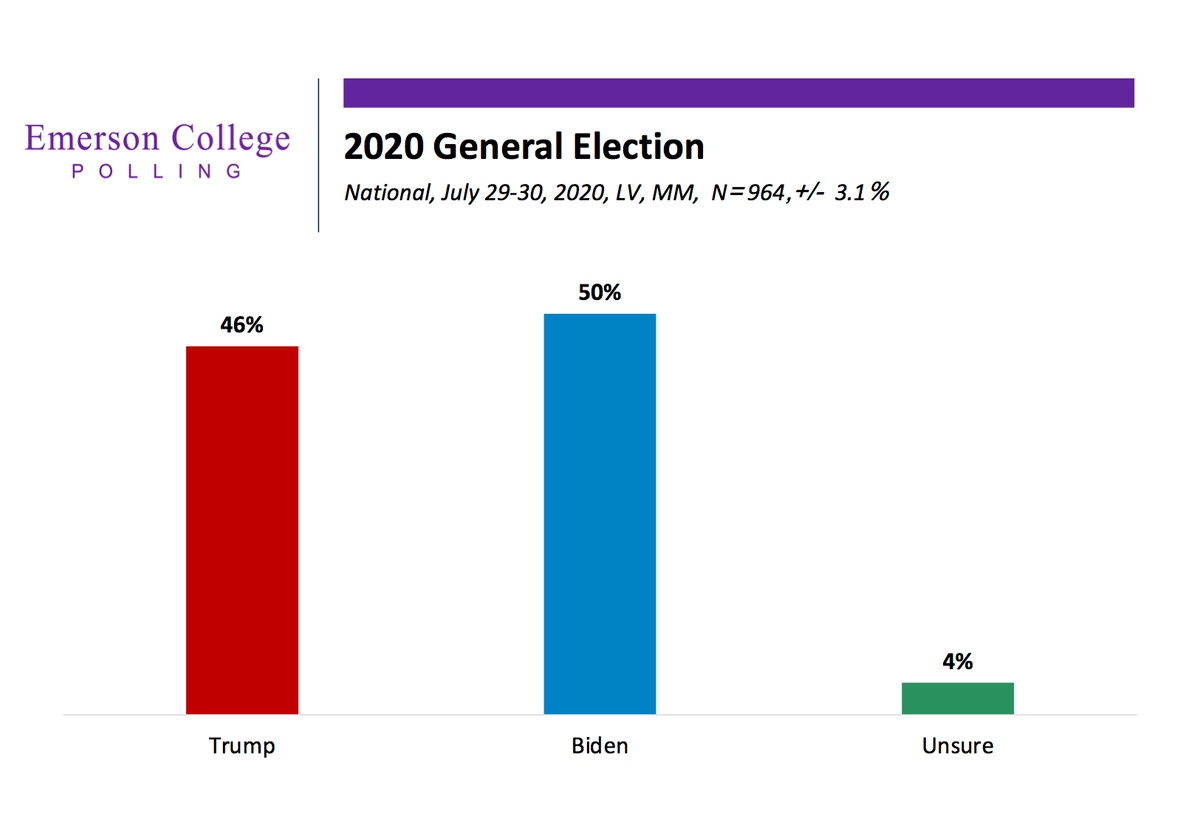 A majority of voters, 53%, still think Trump will be re-elected in November. 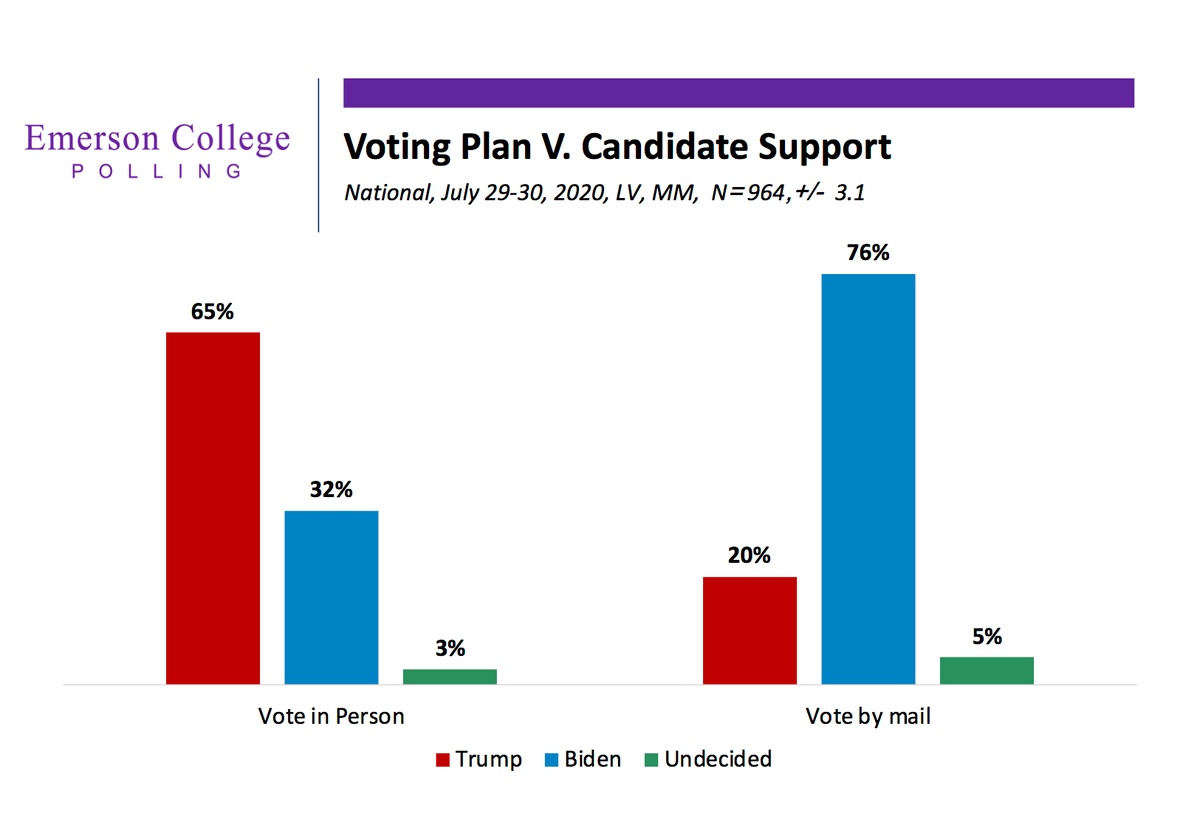 Regarding Trump’s overall job approval as president, 45% of voters approve and 51% disapprove, a slight increase in both numbers from June (43% favorable /50% unfavorable). Among Independent voters, 42% approve and 55% disapprove.

At the Congressional level, a plurality (46%) of voters saying they would vote or lean toward voting for the Democratic candidate in their district for U.S. Congress, while 41% said they would vote or lean towards voting for the Republican candidate. Independent voters are split, with 34% leaning Democrat, 35% leaning Republican, and 31% still undecided.

A plurality of likely voters, 43%, said that a proposed second stimulus check payment of up to $1,200 for individuals does not go far enough to help amid the coronavirus epidemic. Nineteen percent (19%) of voters said this payment would be too much, and 38% thought it was sufficient. Among white voters, a plurality (44%) of voters say the $1200 amount is sufficient, while in every other ethnicity, a plurality said this payment does not go far enough. 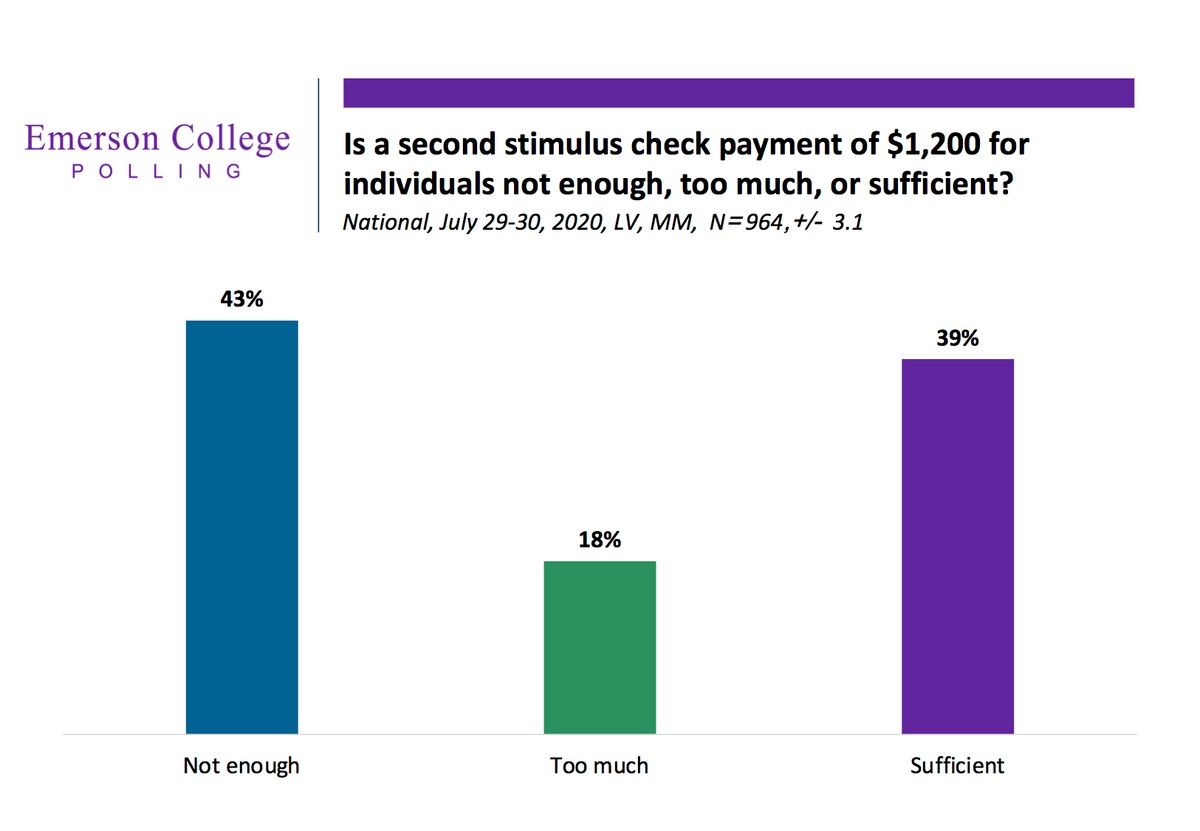 Regarding unemployment benefits, 45% believe the $600 a week benefits that have been in effect to combat coronavirus-related unemployment should be reduced, while 18% think they should be increased and 37% say they should stay as they are for now.

As many countries that have successfully curbed the spread of COVID-19 have adopted mandates requiring universal mask-wearing, the United States has yet to do so. A majority, 67%, of likely voters support a national mandate for all individuals to wear masks in public where social distancing is not possible. 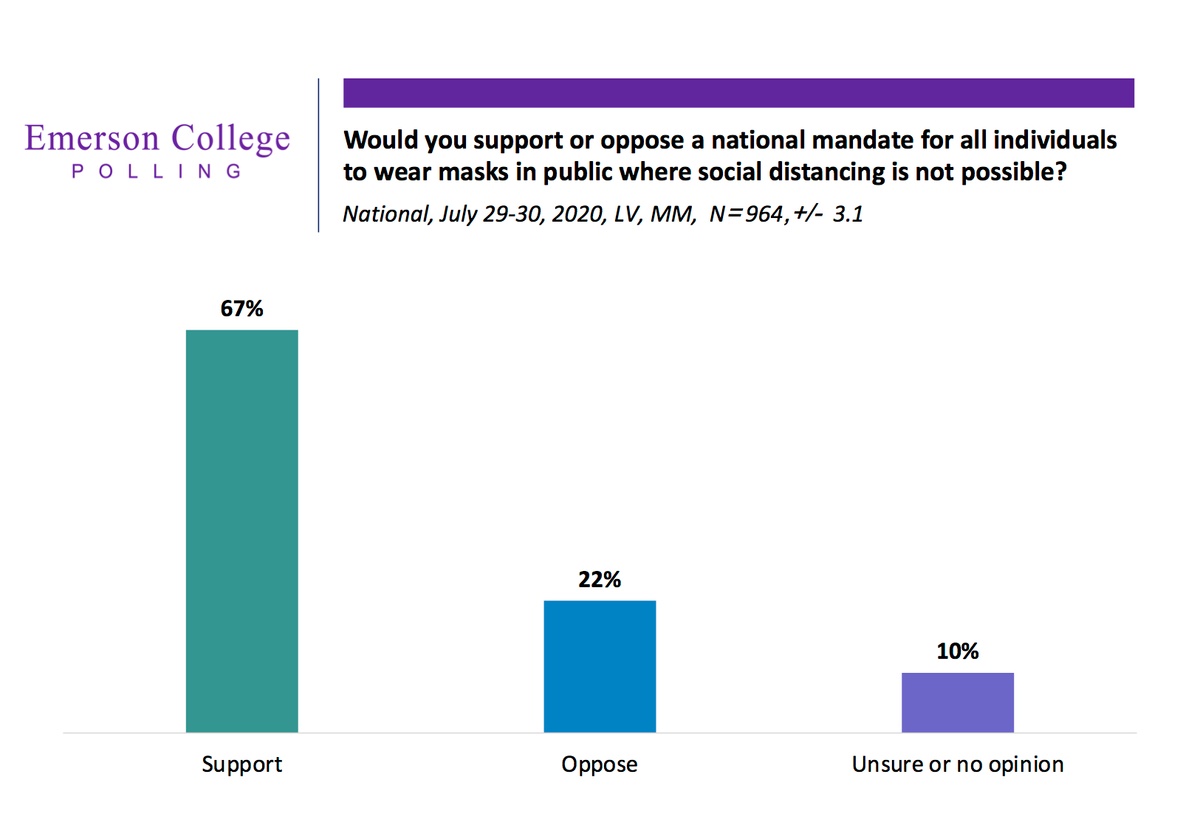 A plurality of voters, 48%, do not think it is safe for K-12 schools to open on schedule this fall, while 37% think they should and 17% are unsure.

Voters are more convinced on the safety of professional sports teams resuming playing but still err on the side of safety, with 41% saying it is unsafe, 33% saying it is safe and 25% being unsure. 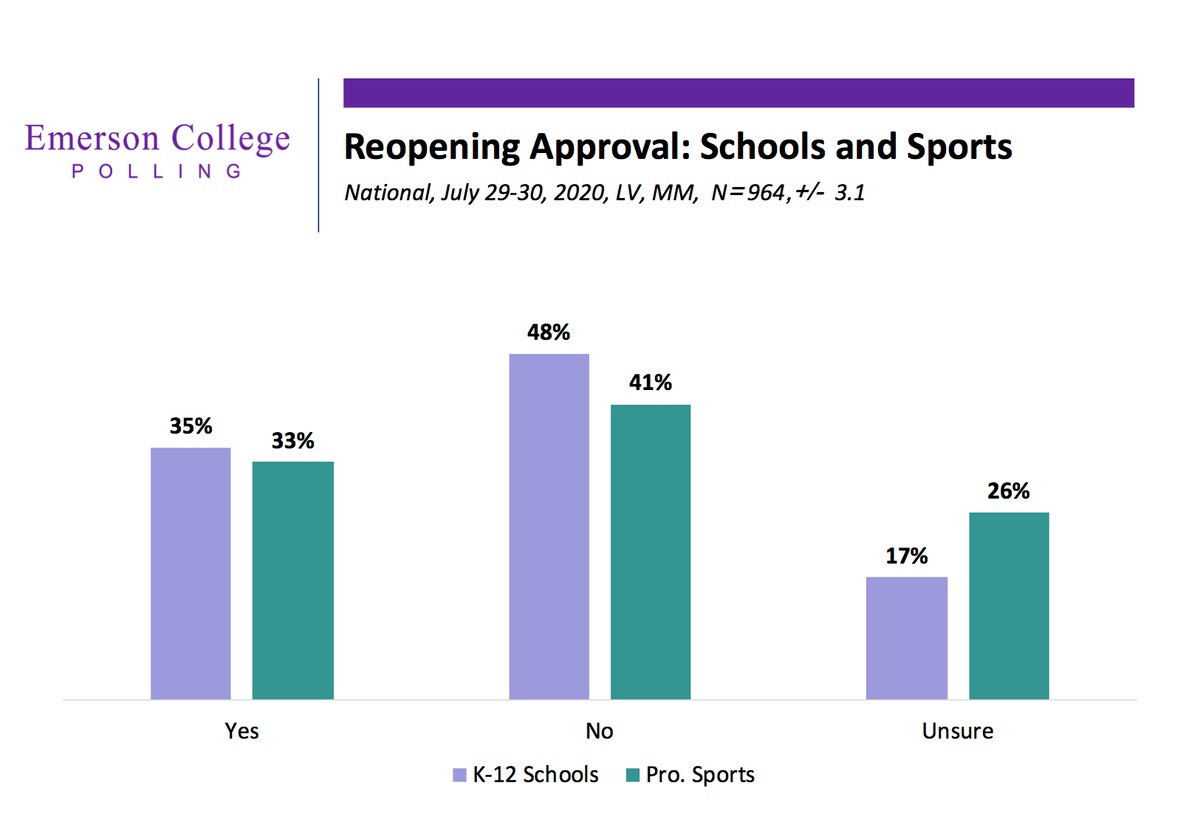 When asked which figure they trust more to provide accurate information regarding the coronavirus epidemic, a majority of voters, 63% trust Dr. Anthony Fauci, compared to 37% who turn to President Trump.

The July National Emerson College/Nexstar Media poll was conducted July 29-30, 2020. The sample consisted of likely Democratic, Republican, and Independent voters, n=964, with a Credibility Interval (CI) similar to a poll’s margin of error (MOE) of +/-3.1 percentage points. The data sets were weighted by gender, age, education, party affiliation, race and region based on 2016 voter turnout modeling. It is important to remember that subsets based on gender, age, party breakdown, ethnicity, and region carry with them higher margins of error, as the sample size is reduced. Data was collected using an Interactive Voice Response (IVR) system of landlines (n=532) and an online panel provided by MTurk (n=432). 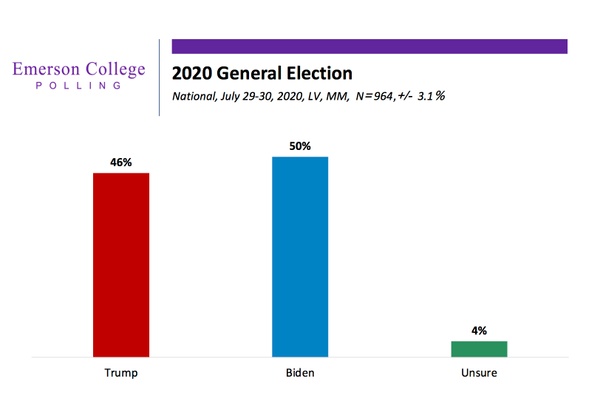 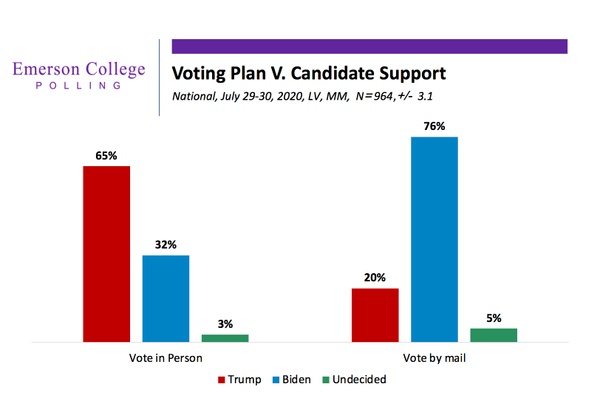 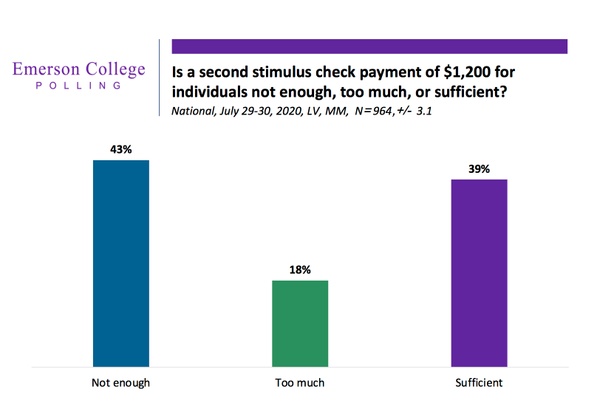 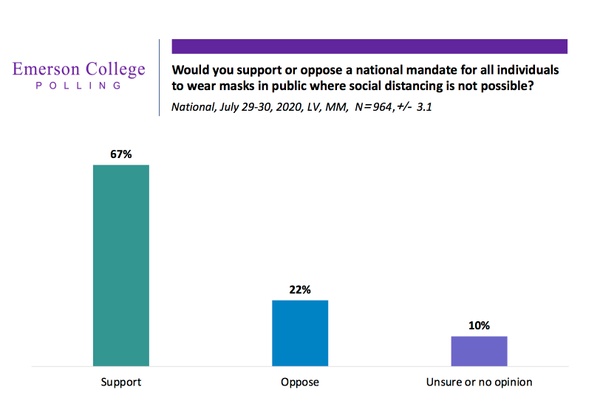 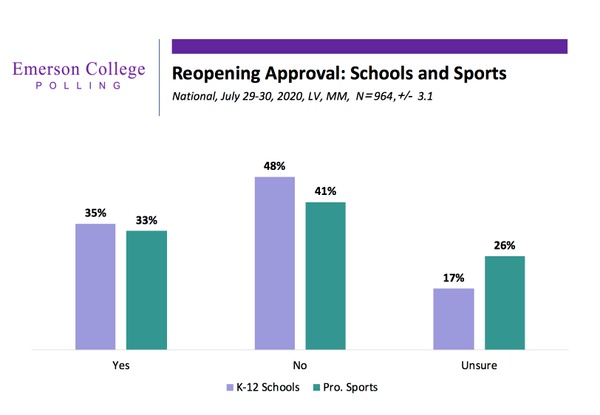