As protesters in all 50 states have come out against the death of George Floyd at the hands of Minneapolis Police officer Derek Chauvin, an overwhelming 87% of American voters feel that the officer should face criminal charges, with only 4% saying he should not face charges, and 9% being unsure. (N=1,431, +/-2.5%, MM, registered voters, June 2-3, 2020). 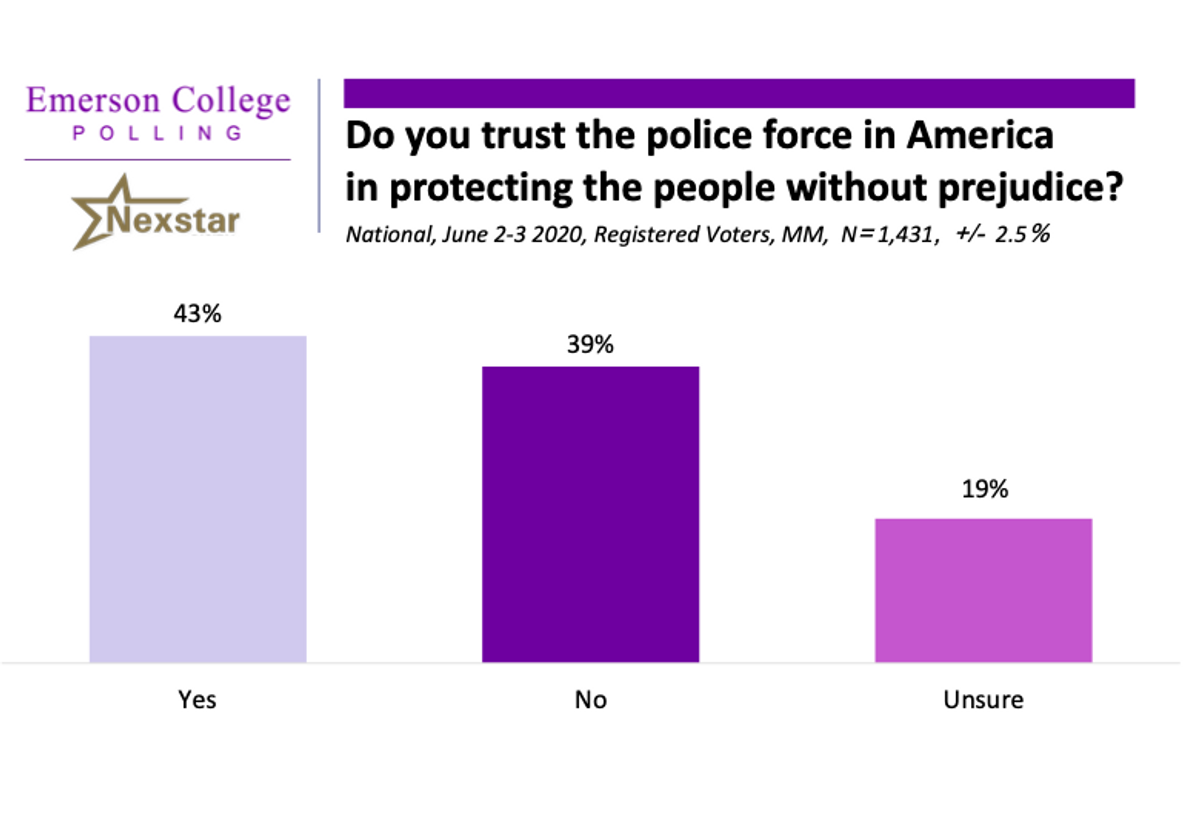 When asked if they approved of the federal government bringing civil rights charges against Officer Chauvin, 71% indicated they would approve of this, 13% say they would disapprove, and 17% were neutral.

Voters are more split in their approval of the protests and instances of looting happening across the country. Regarding the protests, 46% approve and 38% disapprove of the protests, with 16% being neutral. When it comes to looting and other acts of destroying property as a means of protest, 17% approve, 76% disapprove, and 8% are neutral. In the instance of a Minneapolis police precinct being burned down, 65% believe this was not a justified form of protest, 22% believe it was, 9% were unsure, and 4% had not heard of the incident.

Thinking towards the future, a majority (54%) believe that race relations will improve, 25% think things will worsen, and 26% believe things will stay the same.

Spencer Kimball, Director of Emerson College Polling notes that “while a majority (55%) of our society does not see current race relations as having improved since the Civil Rights era, a majority (54%) is also optimistic in believing that race relations will improve in the coming future.”

Trump trails in a head to head matchup against the presumptive Democratic nominee Joe Biden, 47% to 43%, with 10% undecided. 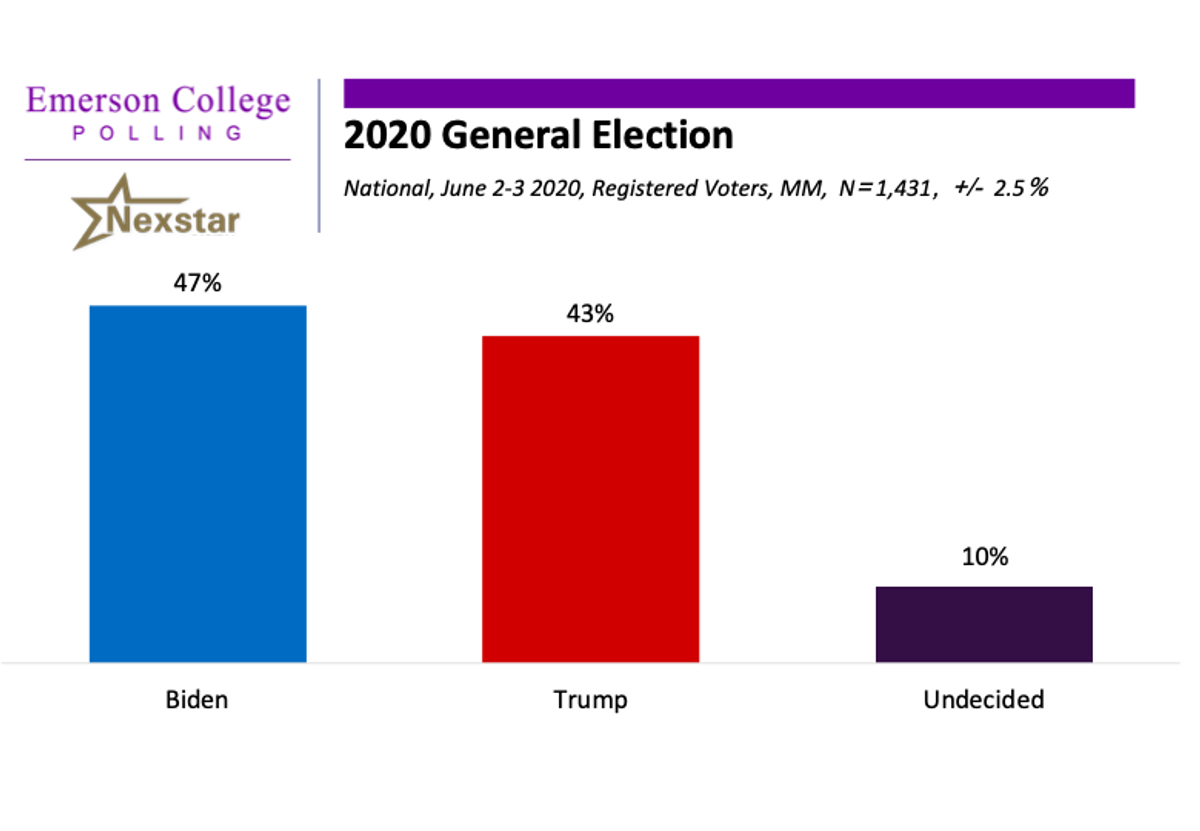 When asked to decide, those undecided voters leaned towards Biden 56% to 44%, which would extend his lead to 53% to 47%.

Despite this, a majority of voters think Trump will be re-elected (53% to 46%)

When it comes to their level of excitement, 69% of Trump voters are extremely or very excited to support him, with 19% being mildly excited and only 12% reporting not that excited.

This is a higher rate of excitement than that of Biden voters, where 55% are extremely or very excited to support him, 24% mildly excited and 22% reporting not that excited.

The June National Emerson College/Nexstar Media poll was conducted June 2-3, 2020. The sample consisted of registered Democratic, Republican, and Independent voters, n=1431, with a Credibility Interval (CI) similar to a poll’s margin of error (MOE) of +/- 2.5 percentage points. The data sets were weighted by age, ethnicity, education, and party based on 2016 election turnout. It is important to remember that subsets based on gender, age, party breakdown, ethnicity, and region carry with them higher margins of error, as the sample size is reduced. Data was collected using an Interactive Voice Response (IVR) system of landlines (n=688) and an online panel provided by MTurk (n=743). 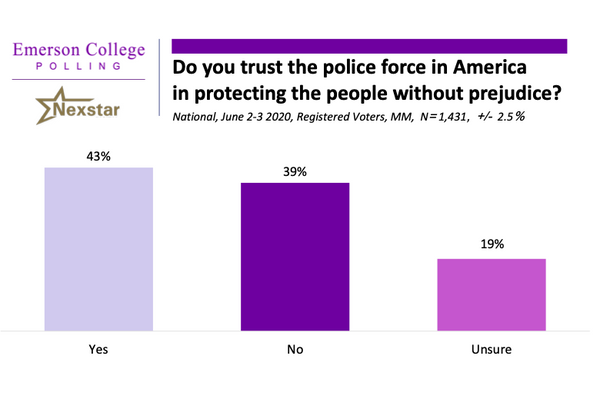 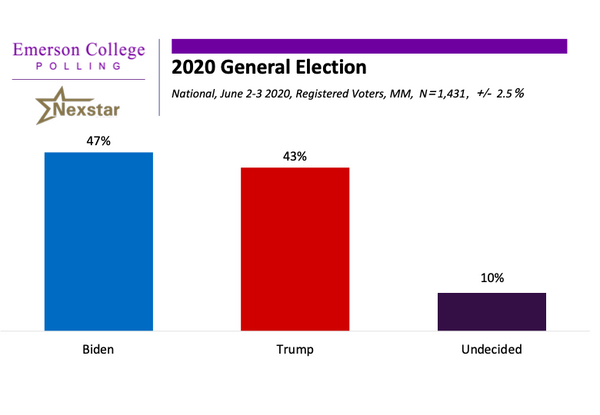