A WGN-TV/Emerson College poll of Chicago residents found that crime is on the rise, with 62% saying there is more crime now in Chicago than there was a year ago. Twenty-four percent (24%) feel that the amount of crime has stayed the same, and 14% feel that there is less crime today. 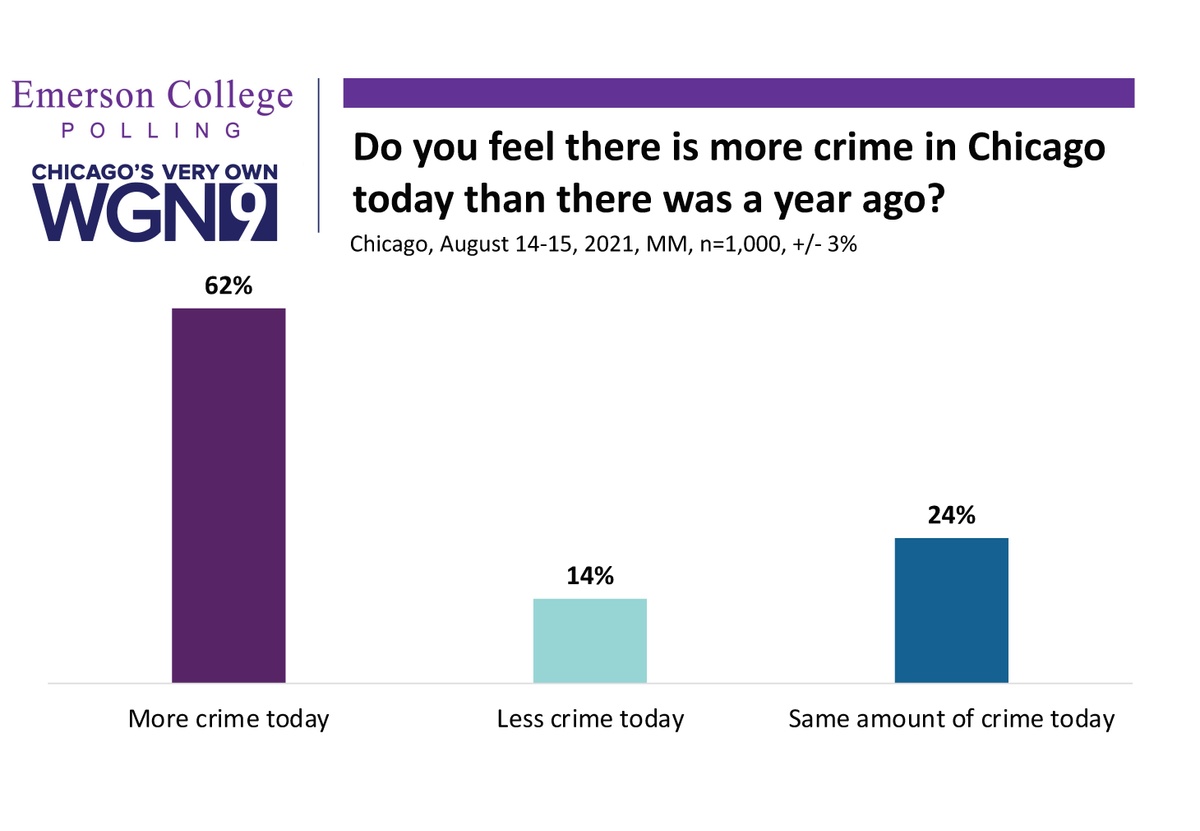 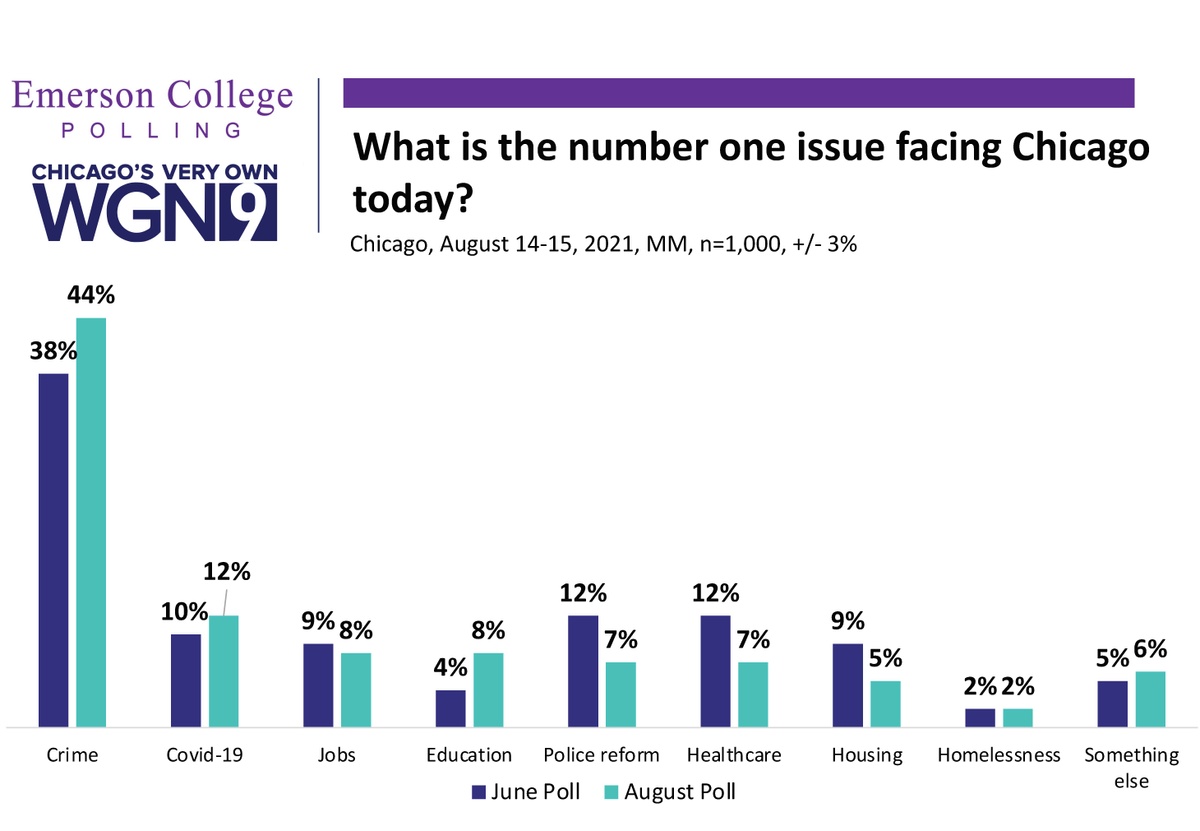 Violent crime is the primary concern of Chicago residents, with 87% choosing it as the biggest crime concern, compared to 8% who said property crime and 5% who said some other type of crime. A majority (65%) said that if gun violence specifically continues in Chicago, they would consider moving.

In regards to carjacking, a plurality (47%) of respondents said they are concerned a great deal about the issue, while 31% are concerned a fair amount. Only 18% said they were only a little or not at all concerned, while 3% had no opinion.

Women generally feel less safe than men in the city, with 47% reporting feeling at least somewhat unsafe, compared to only 35% of men.

A majority (70%) of respondents have at least a somewhat positive opinion of the Chicago Police Department, while 23% have a somewhat or very negative opinion, and 7% are unsure.

Despite this positive view, a plurality (37%) of respondents said they believe the Chicago PD is ultimately most responsible for solving crime in the city. Twenty-six percent (26%) said that Mayor Lightfoot is most responsible, 22% said the Cook County State’s Attorney, 8% said the Chicago City Council, and 8% said federal agents such as the ATF.

A majority (70%) of respondents are against allowing individuals charged with gun crimes to be allowed to be released on electronic monitoring while awaiting trial, while 30% support this policy.

Residents are largely concerned about the threat of the Delta variant of Covid-19, with 49% very concerned and 31% somewhat concerned. Eleven percent (11%) are not too concerned, and 10% are not at all concerned. A strong majority (70%) indicate they would support a reinstatement of an indoor mask mandate in Chicago, with 21% opposed and 9% unsure.

The poll also finds residents split on Mayor Lori Lightfoot’s job performance, with 46% disapproval and 43% approval. Eleven percent (11%) were unsure or had no opinion, and 1% had never heard of Lightfoot. Compared to the WGN-TV/Emerson poll from early June, Lightfoot’s approval has dropped 5 points, from 48%, and her disapproval has gone up seven points, from 39%.

The WGN-TV/Emerson College Chicago poll was conducted August 13-15, 2021. The sample consisted of Chicago residents, n=1000, with a Credibility Interval (CI) similar to a poll’s margin of error (MOE) of +/- 3 percentage points. The data sets were weighted by gender, age, education, region, and race based on the general population in Chicago (Census Reporter). It is important to remember that subsets based on gender, age, ethnicity, and region carry with them higher margins of error, as the sample size is reduced. Data was collected using an Interactive Voice Response (IVR) system of landlines, a cell phone sample of SMS-to-web, and an online panel. 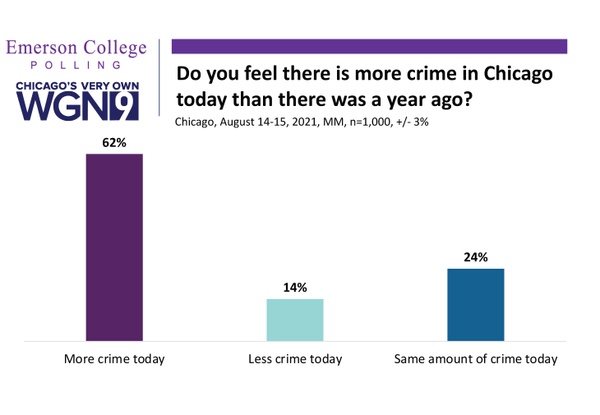 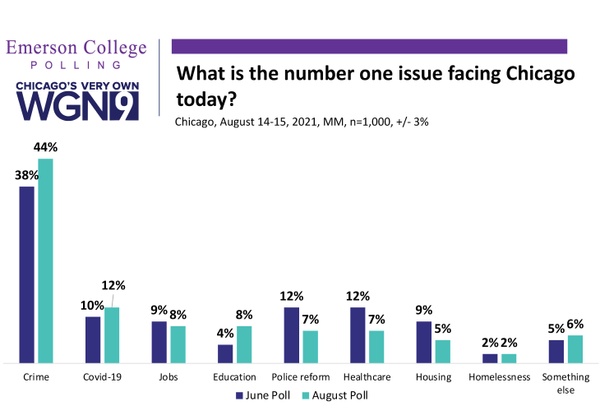