A WGN-TV/Emerson College poll of Chicago voters finds Mayor Lori Lightfoot with a 48% job approval rating at the 2-year mark since her inauguration in 2019. Thirty-nine percent (39%) of voters disapprove of her job as mayor, while 13% were unsure or had no opinion. In contrast, President Biden holds a 76% approval with 17% disapproval, and Governor J.B. Pritzker has a 64% approval and 24% disapproval among the same group of voters. 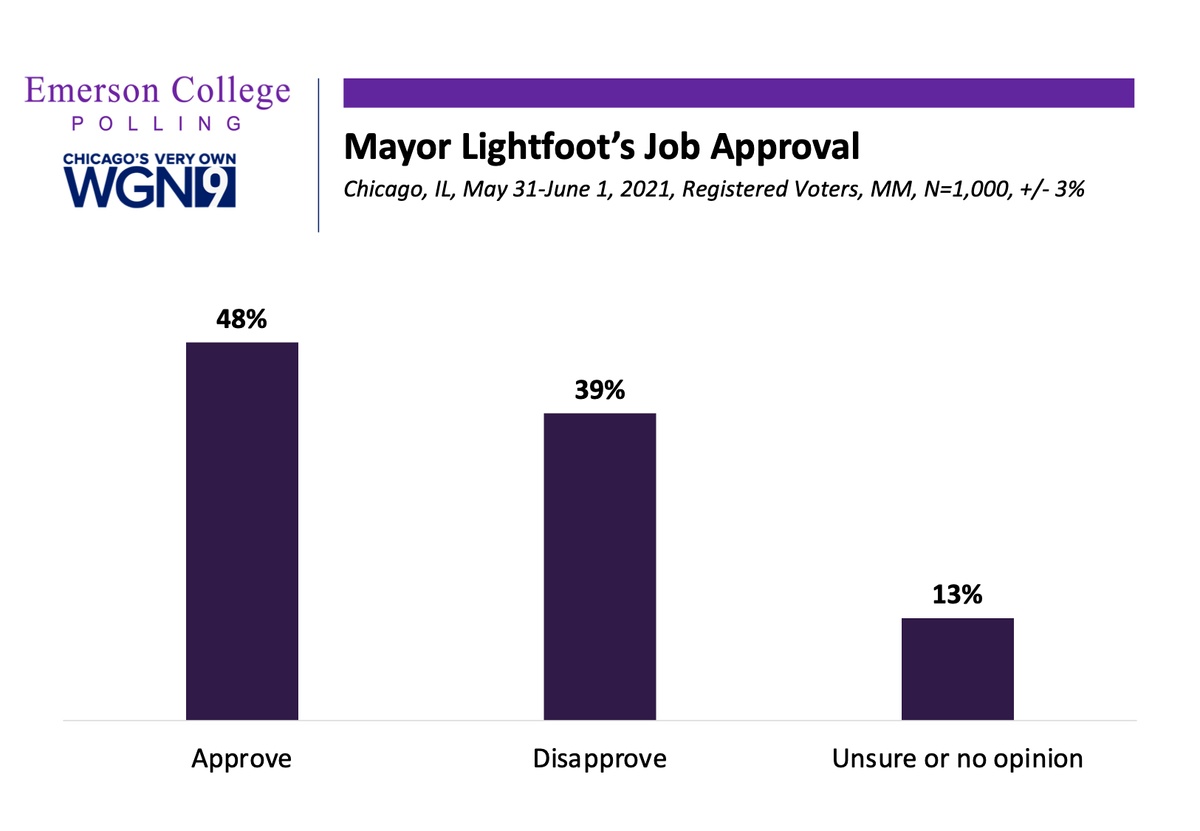 Voters were asked to rate the job performance of Mayor Lightfoot on a variety of issues facing the city, using the options “excellent”, “good”, “fair”, and “poor”. 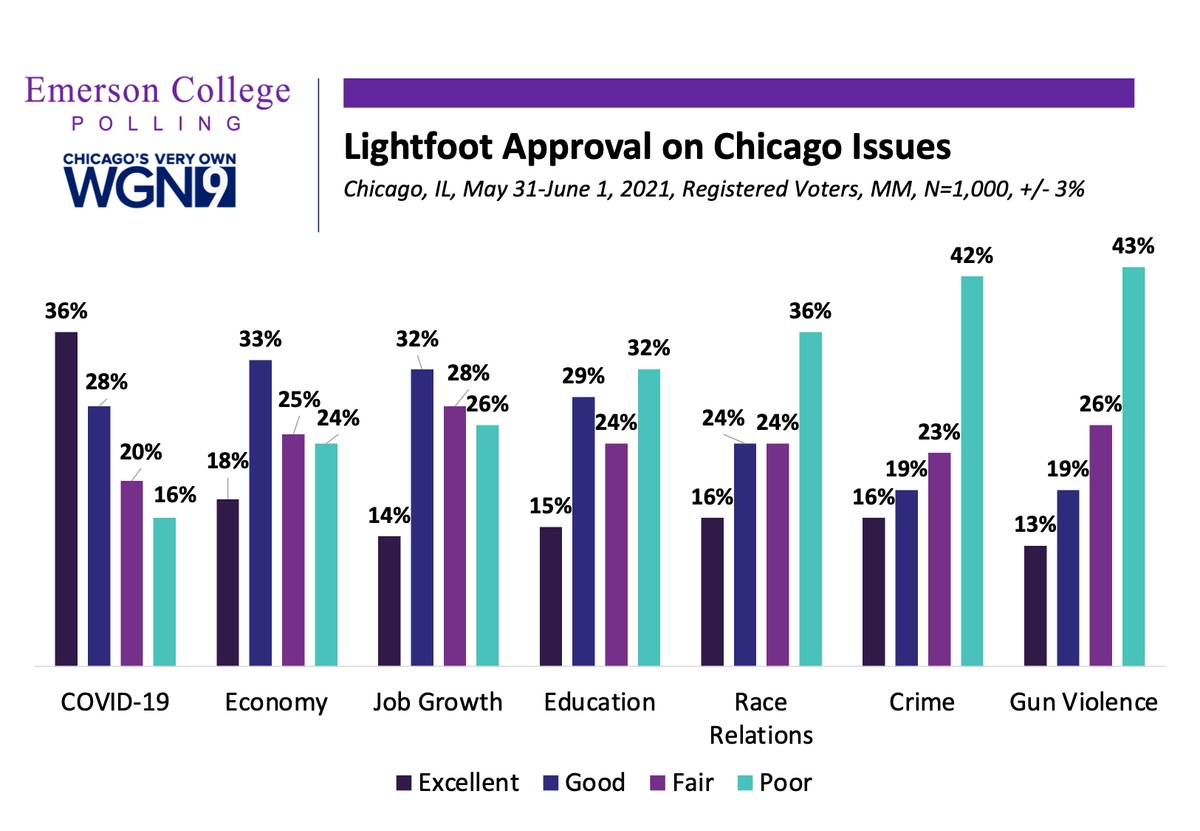 Lightfoot’s rating was highest on her management of the Covid-19 pandemic, with a combined 64% rating her job as excellent or good. Twenty percent (20%) of voters rated Lightfoot’s management as fair, and 16% rated it as poor.

On the issue of improving race relations in Chicago, a plurality (36%) rated Lightfoot’s job as poor, 24% said fair, 24% said good, and 16% rated her performance on this issue as excellent. African-American and Hispanic respondents rated Lightfoot’s job performance higher: 47% of African-Americans and 44% of Hispanics rated her job as excellent or good, compared to 38% of whites.

When asked the number one issue facing Chicago today, a plurality (38%) said crime. Twelve percent (12%) said police reform, 11% said healthcare, 10% said Covid-19, and 9% said housing and jobs, respectively. Groups that reported crime as the number one issue at a higher rate include those over the age of 50 (49%) and African-Americans (46%). 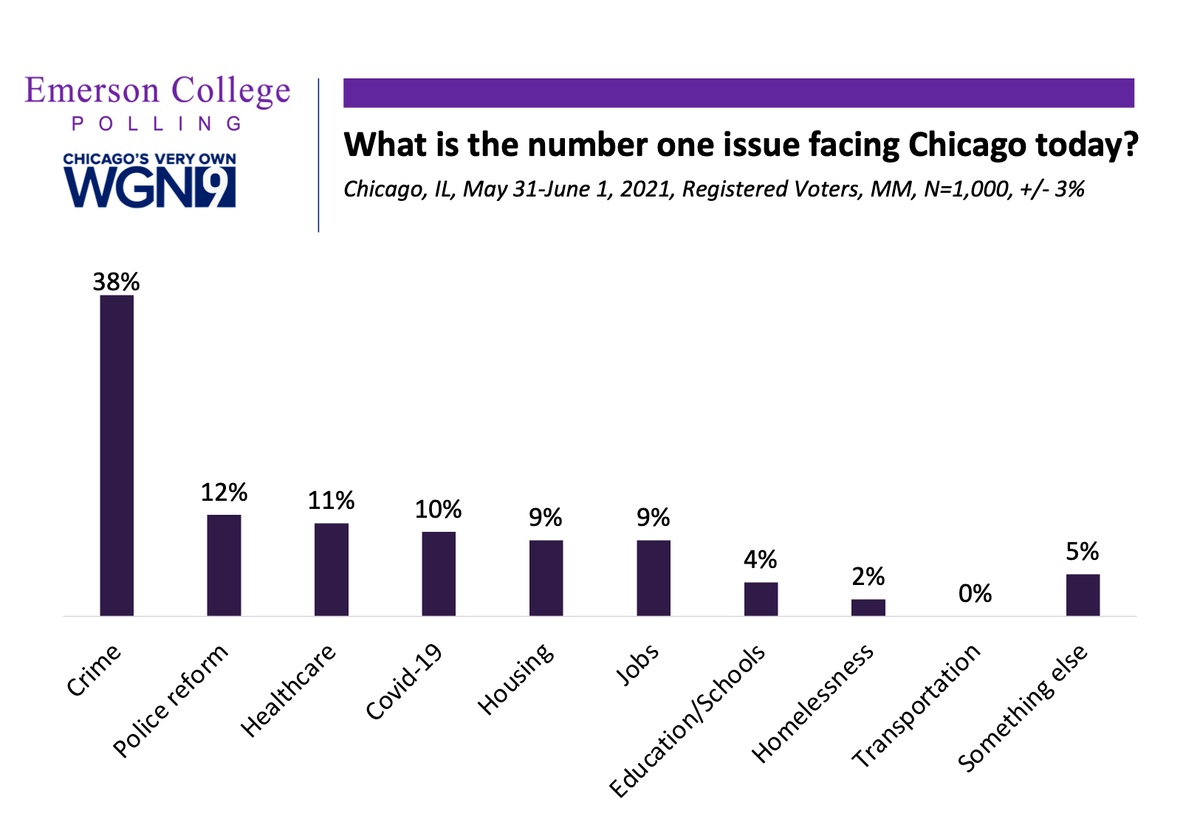 Spencer Kimball, Director of Emerson College Polling notes: “It is alarming to see crime as the top issue for 38% of voters in Chicago, even more so when compared to 20% saying crime is the top issue in our PIX11 poll of NYC last week.  However, despite crime being the top issue and the mayor having her lowest ratings on crime and gun violence, she enjoys a positive overall approval of +9 points, which suggests that other issues are more important to voters.”

When asked if they favor civilian oversight of the Chicago Police Board, a majority (63%) said yes. Twenty-two percent (22%) said no, and 15% were unsure or had no opinion.

The WGN-TV/Emerson College Chicago poll was conducted May 31-June 1, 2021. The sample consisted of Chicago registered voters, n=1000, with a Credibility Interval (CI) similar to a poll’s margin of error (MOE) of +/- 3 percentage points. The data sets were weighted by gender, age, education, region, and race based on the voting-age population in Chicago (Census Reporter). It is important to remember that subsets based on gender, age, ethnicity, and region carry with them higher margins of error, as the sample size is reduced. Data was collected using an Interactive Voice Response (IVR) system of landlines, a cell phone sample of SMS-to-web, and an online panel. 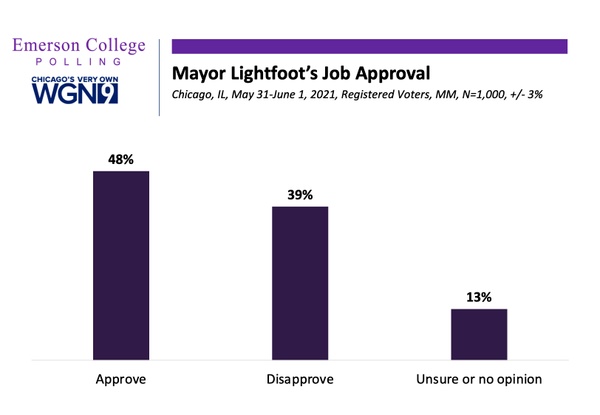 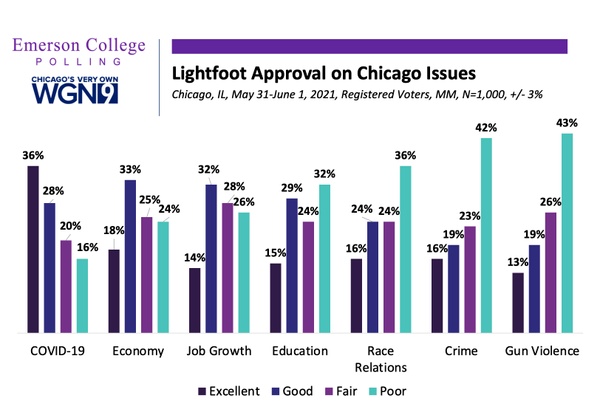 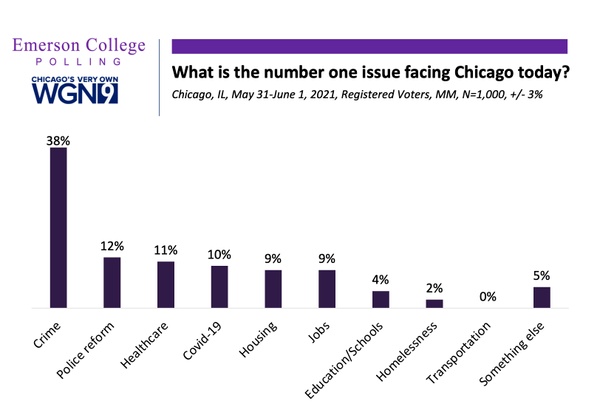