The last Emerson College/Nexstar Media poll finds Governor Gavin Newsom peaking, with 60% of voters voting against the recall, while 40% are voting to recall the governor. This is the first Emerson/Nexstar Poll that has Newsom’s support over 48%, and shows the lowest support for the recall since March. Since the last Emerson/Nexstar poll in August, when voters were split 48% to 46% against the recall, Newsom has bolstered his support by 12 percentage points. 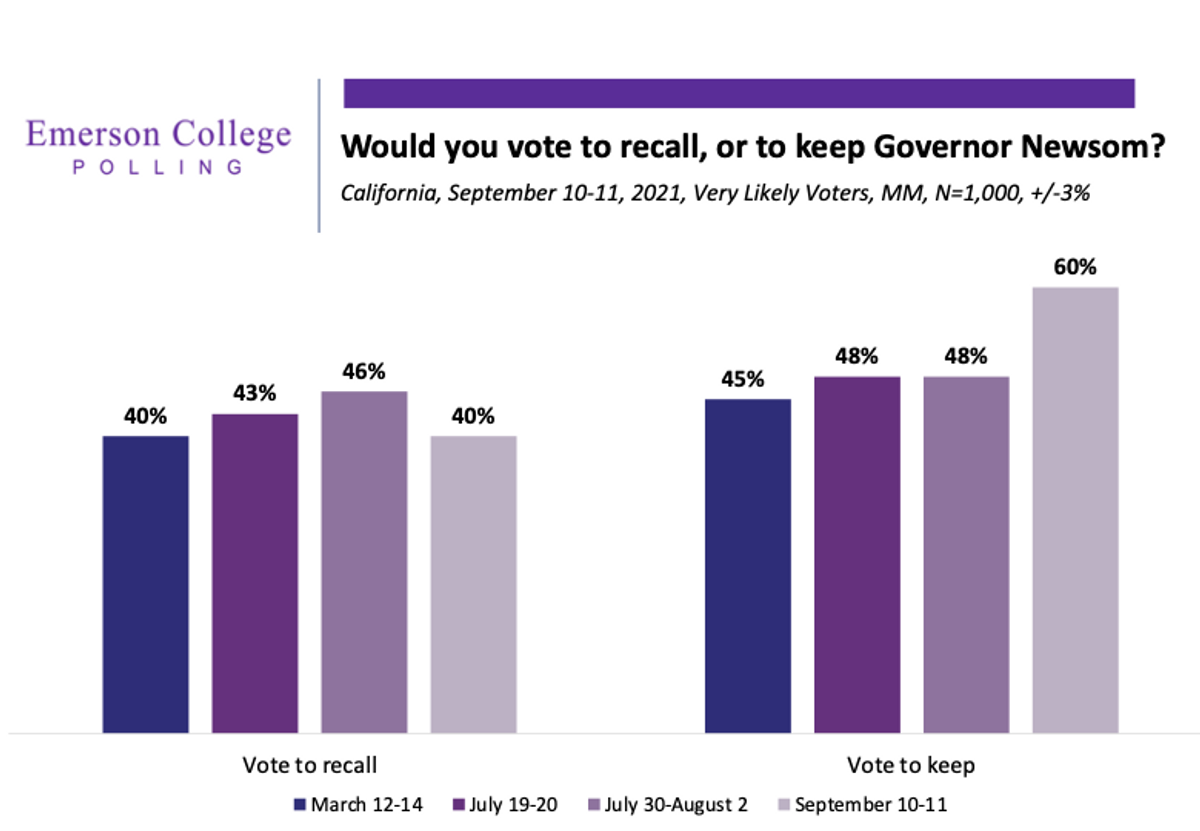 Voters who said they have already voted are breaking against the recall at 64% with 36% in favor of recall. However, voters who were still planning to vote (on election day) were only slightly opposed to the recall, 52% to 46%.

Breakdown of voting intention by race/ethnicity shows Hispanic voters — who in the previous polls were supporting the recall— are now opposing the recall nearly 2:1, 65% to 34%. White voters are the most split among all race demographics, but still vote to keep Governor Newsom 55% to 45%. Black voters support keeping the governor 65% to 35%, and Asian American voters support keeping the governor 70% to 29%.

Regionally, opposition for the recall is strongest in the northern areas of the state with the Bay Area opposed at 75% and the northwest region opposed at 72%. Opposition is also strong in the area along the southern border (65%) as well as in the Sacramento region (63%) and LA County (62%). Support for the recall is strongest along the Northeastern border of the state at 59% to 41%. Voters are split in the Central Valley region (51% to 49%) and in Orange County (51% to 47%).

Female voters are more strongly in support of keeping Governor Newsom, 63% to 37%, while male voters support keeping the governor 56% to 43%.

Among those voting to recall Governor Newsom, Larry Elder is the only candidate to clear double digits with 30%. Thirty-four percent of recall voters plan to leave this question blank. Among Democrats, 55% plan to not vote for a replacement candidate.

Spencer Kimball, Director of Emerson College Polling says that “one way to evaluate if the Democrats' strategy to not run a well known candidate was successful is to look at the second question to see if more voters blank the ballot than vote for the top candidate.”

The California Emerson College/Nexstar Media Group poll was conducted September 10-11, 2021. The sample consisted of California likely voters, n=1,000, with a Credibility Interval (CI) similar to a poll’s margin of error (MOE) of +/- 3 percentage points. The data sets were weighted by gender, age, education, race, party affiliation, and region based on 2020 turnout modeling. It is important to remember that subsets based on gender, age, party breakdown, ethnicity, and region carry with them higher margins of error, as the sample size is reduced. Data was collected via a cellphone sample using SMS-to-web, a landline sample using IVR, and an online panel provided by Amazon MTurk. 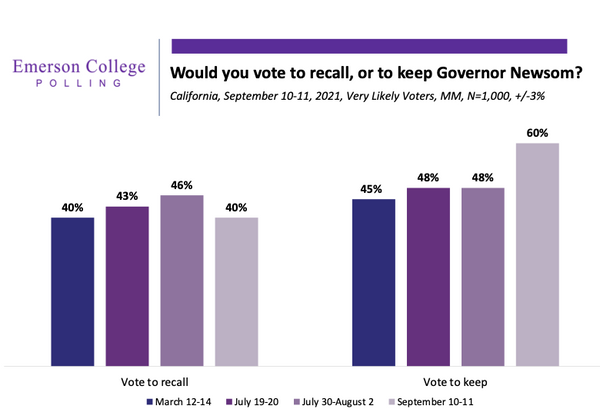