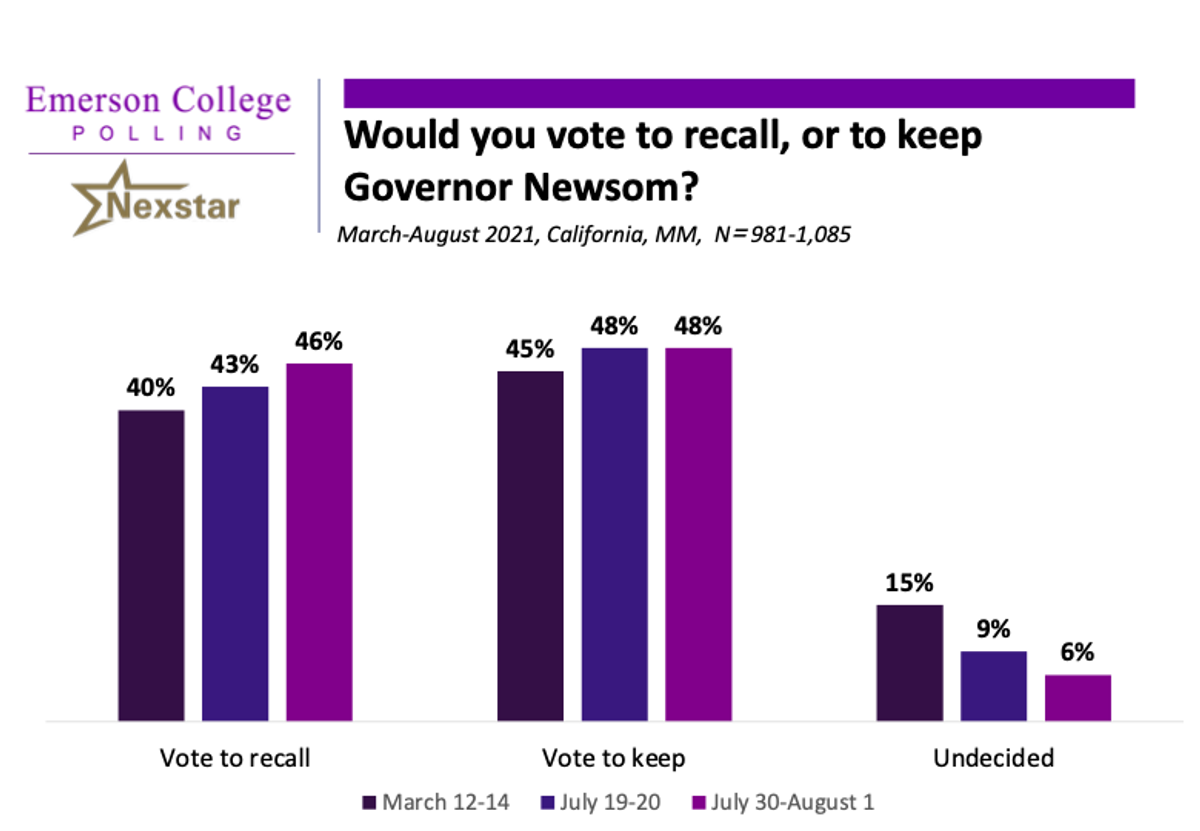 Majorities of Republicans (80% recall/16% keep) and Independents (54% recall/ 34% keep) are in favor of the recall. Democrats are largely in favor of keeping Newsom, but almost a quarter plan to vote to recall the Governor (23% recall/73% keep).

A plurality of voters (40%) are unsure which candidate they will choose for the second ballot question, who should replace Gov. Newsom in the case of his recall. Leading the field of candidates is talk radio host Larry Elder, at 23%. Since July’s poll, Elder has gained seven percentage points. Businessman John Cox and former Olympian and television personality Caitlyn Jenner are both polling at 7%, followed by California State Assemblyman Kevin Kiley at 5%, former San Diego mayor Kevin Faulconer at 4%, and social media influencer Kevin Paffrath at 1%. Thirteen percent (13%) of respondents reported that they plan to vote for someone else.

A plurality (44%) of Republicans and nearly a third (29%) of Independents are planning to vote for Elder. A majority of Trump voters from 2020 (55%) are supporting Elder, while 70% of Biden 2020 voters are either undecided or voting for someone else. 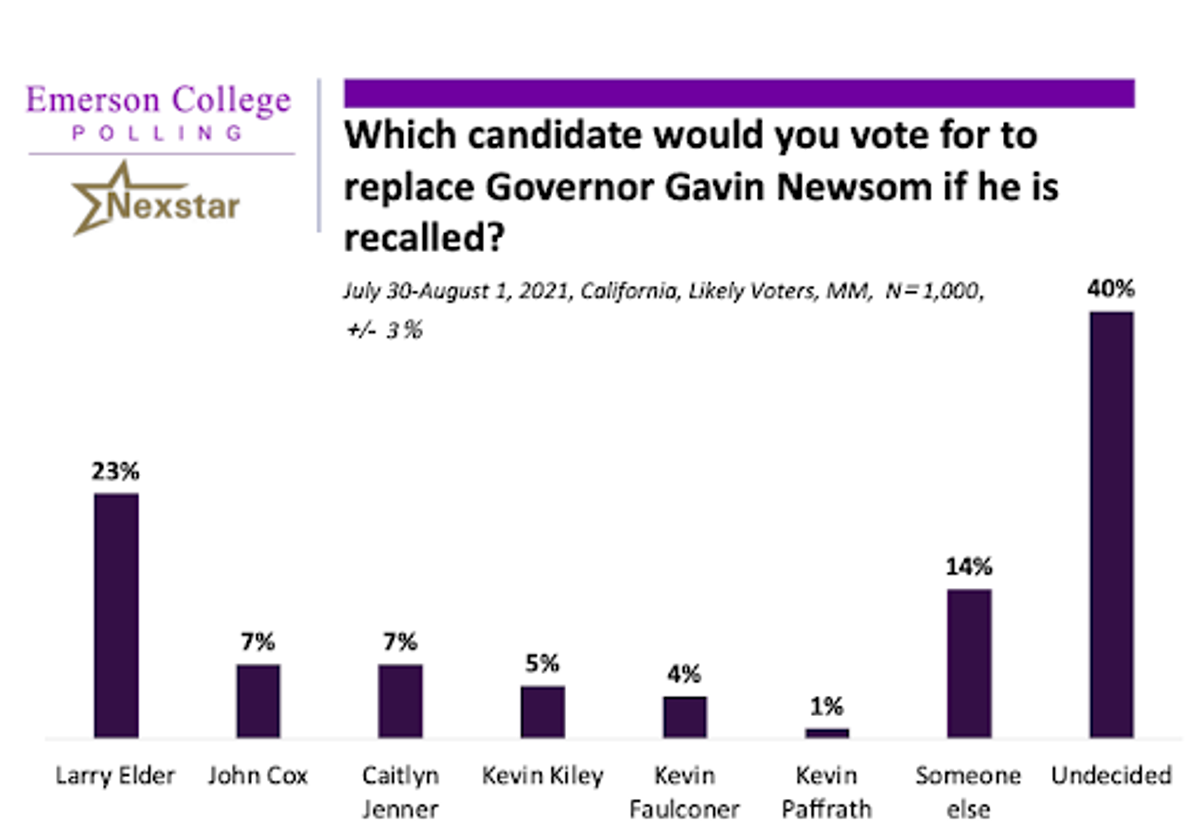 Voters were also asked about the number one issue facing California today, and homelessness led at 19% as it did in the July poll. Other top-ranking issues included housing (16%), Covid-19 (15%), crime (13%), the environment (13%), jobs (6%), and education (3%). The issue of the environment increased 7 percentage points since the July poll, which could be attributed to additional wording of ‘wildfires and droughts’, Crime saw a 6 percentage point increase since mid-July, with the wording of that answer unchanged.

Spencer Kimball, Director of Emerson College Polling said, “this poll suggests that the tightening of the race could be attributed to people's increased concern on crime.”

The California Emerson College/Nexstar Media Group poll was conducted July 30-August 1, 2021. The sample consisted of California likely voters, n=1,000, with a Credibility Interval (CI) similar to a poll’s margin of error (MOE) of +/- 3 percentage points. The data sets were weighted by gender, age, education, race, party affiliation, and region. It is important to remember that subsets based on gender, age, party breakdown, ethnicity, and region carry with them higher margins of error, as the sample size is reduced. Data was collected via a cellphone sample using SMS-to-web, a landline sample using IVR, and an online panel provided by Amazon MTurk. 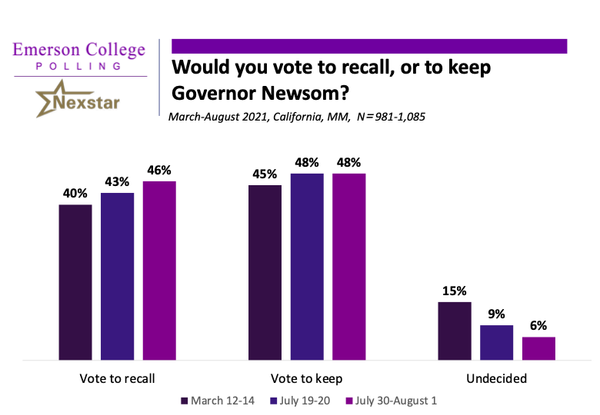 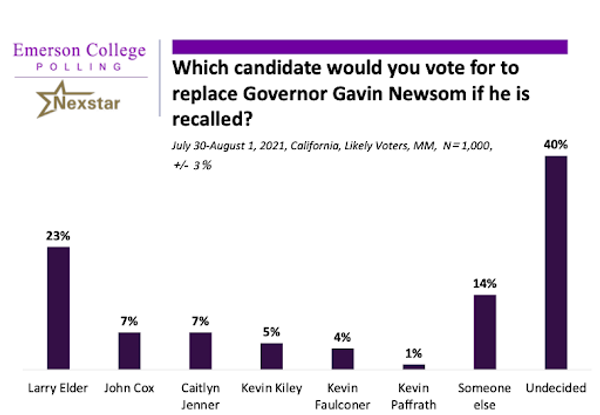