April 2022 National Poll: Civics Education May Be Linked to Trust in Institutions; Biden Approval Holds at 42%

The April Emerson College national poll asked voters if they had ever taken a civic or government class while in middle or high school. Overall, 84% of respondents said they had taken one (22%) or multiple (62%) civics classes while 16% had taken no classes in civics or government. A significant difference was found between these two groups in how they trusted different institutions. For example, 37% of those who did not take a civics class believe their state runs fair elections compared with 62% of those who had taken a class.

President Joe Biden has a 42% job approval and 50% job disapproval. The president’s approval has remained relatively stagnant in 2022 Emerson College national polls, at 43% in March and 42% in February.

Spencer Kimball, Executive Director of Emerson College Polling noted, “President Biden continues to struggle with Hispanic voter approval, 35% approve of the job he’s doing while 60% disapprove. Similarly, he has a 34% approval with White voters,” Kimball continued, “this contrasts his 82% approval among Black voters.”

The economy is the most important issue facing the country for a plurality (40%) of respondents, followed by Covid-19 (13%), and healthcare (10%); no other issue cleared 10%.

“Nearly half, 49%, of Hispanic voters say the economy is the most important issue facing the country. This is the highest among all racial demographics; the economy is likely the driving force behind Hispanics 60% disapproval of the president,” Kimball said.

Looking ahead to the 2022 Midterm Elections, 47% of respondents say they would vote for the Republican congressional candidate on the ballot, while 41% would support the Democratic candidate; 13% are undecided. 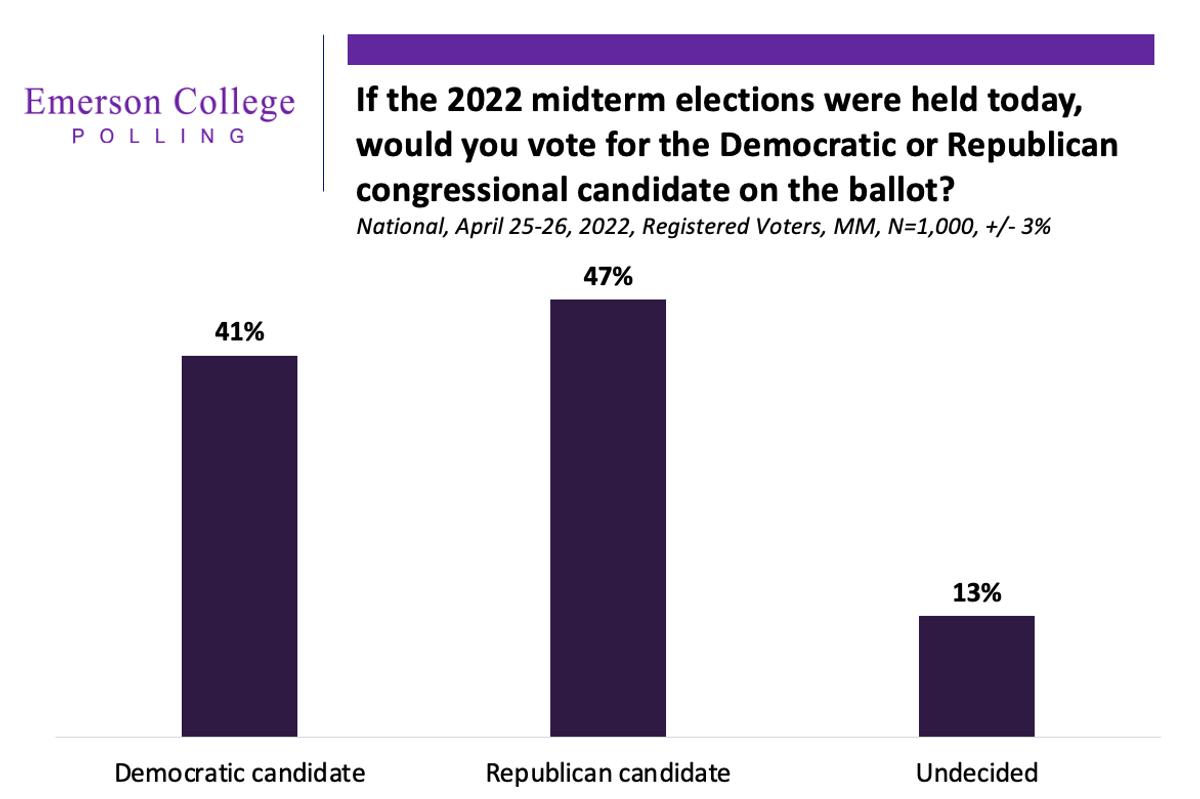 The Emerson College April national poll was conducted April 25-26, 2022. The sample consisted of registered voters in the United States, n=1,000 with a Credibility Interval (CI) similar to a poll’s margin of error (MOE) of +/- 3 percentage points. The data sets were weighted by age, education, race, and region based on 2020 turnout modeling. It is important to remember that subsets based on gender, age, party breakdown, ethnicity, and region carry with them higher margins of error, as the sample size is reduced. Data was collected using an online panel provided by Amazon MTurk, and an Interactive Voice Response (IVR) system of landlines. 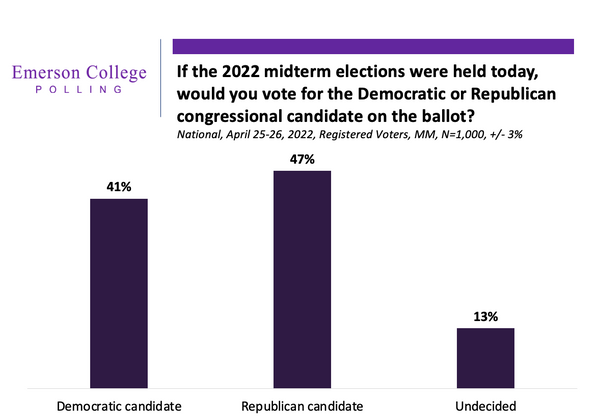