Two issues voters overwhelmingly agree on are accepting Ukraine refugees and making Daylight Savings Time permanent. Sixty-nine percent (69%) of voters say the US should accept refugees from Ukraine, while 16% think the US should not. Seventy-four percent (74%) of voters are in consensus about the “Sunshine Protection Act” legislation that would make Daylight Savings Time permanent, while 26% oppose the measure. 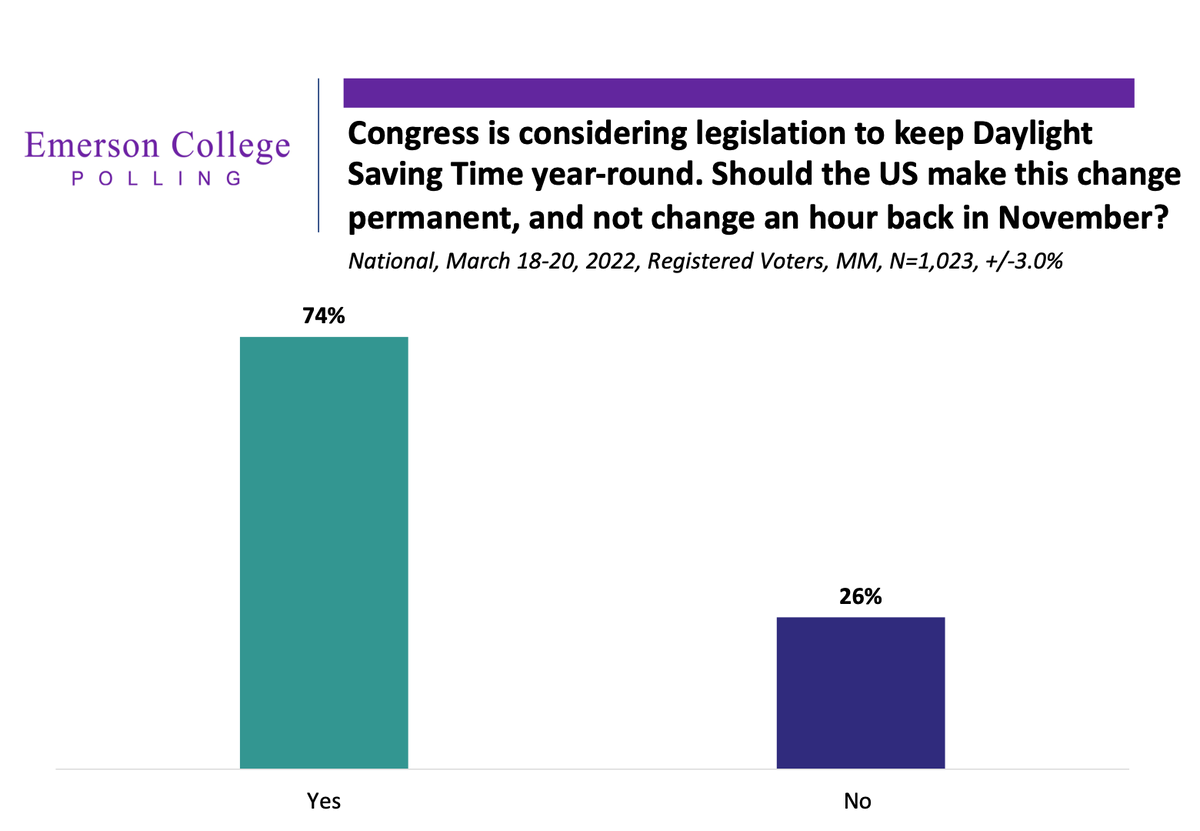 Eighty-three percent (83%) of voters say they are experiencing some hardship due to increased prices on everyday items, with 40% reporting significant hardship, and another 43% reporting some hardship. Seventeen percent (17%) report experiencing no hardship. When asked about who they blame for an increase in gas prices, a plurality (39%) blame the Biden Administration, 21% blame the sanctions on Russia, and 18% blame gas and oil companies. 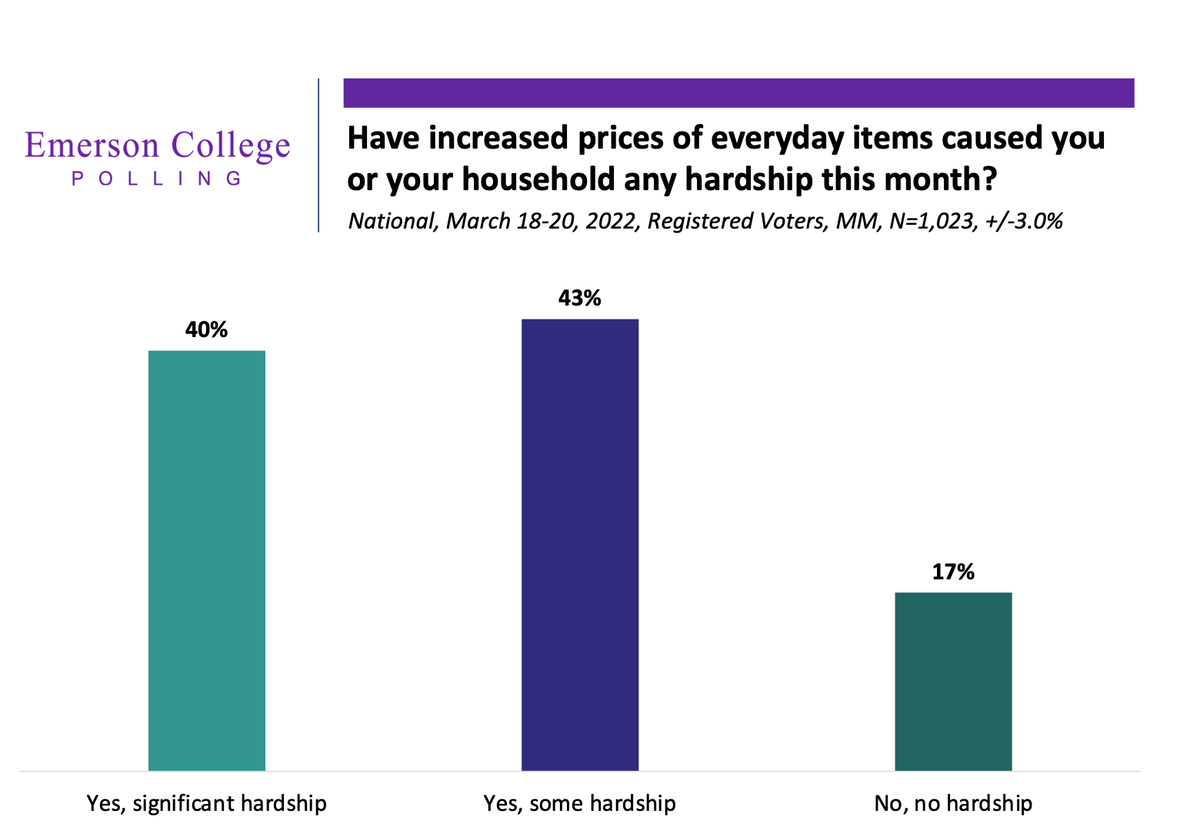 The most important issue for a plurality of voters is the economy (including jobs, inflation, and taxes) at 37%, followed by healthcare at 14%, and Ukraine-Russian war at 12%. No other issue reaches double digits.

President Joe Biden has a 43% approval rating, a one-point increase from February, while his disapproval dropped a point to 49%. Looking ahead to the midterm elections, the Republican party continues to hold an advantage: 47% say they will support the Republican congressional candidate, while 42% plan to support the Democratic congressional candidate, with 11% undecided.

Spencer Kimball, Executive Director of the Emerson College Poll said, “Biden struggles among Independent voters: just 28% approve of the job he is doing while 64% disapprove. When looking at the Midterm generic congressional ballot, Independents break 28% for Democrats, 42% with Republicans, and 31% are undecided.”

Kimball continued, “Notable demographic differences include region and education. Trump leads Biden among both suburban voters, 47% to 38%, and rural voters, 59% to 35%, while Biden holds 54% to 30% support among urban and city voters. Regarding education, Trump leads among those without a college degree, 51% to 33%, while Biden leads among those with a college degree or more 52% to 37%.”

When voters were asked about the potential for nuclear war, 33% say it is inevitable while 25% think it will never happen. Forty-two percent (42%) are unsure. When asked specifically about how concerned they were about Russia and nuclear conflict, 80% say they are somewhat or very concerned.

The Emerson College March national poll was conducted March 18-20, 2022. The sample consisted of registered voters in the United States, n=1,023 with a Credibility Interval (CI) similar to a poll’s margin of error (MOE) of +/- 3 percentage points. The data sets were weighted by age, education, race, and region based on 2020 turnout modeling. It is important to remember that subsets based on gender, age, party breakdown, ethnicity, and region carry with them higher margins of error, as the sample size is reduced. Data was collected using an online panel provided by Amazon MTurk, and an Interactive Voice Response (IVR) system of landlines. 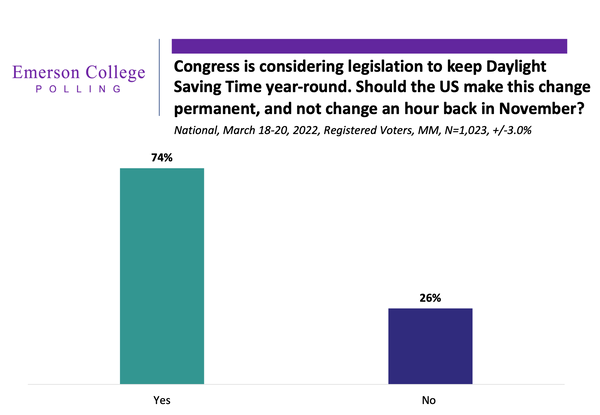 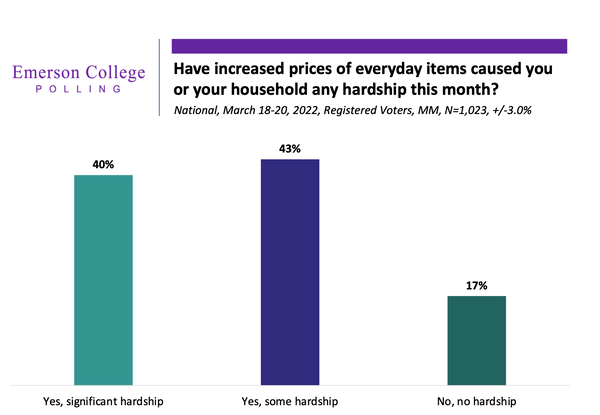