Democrat and former Governor Terry McAuliffe leads Republican candidate Glenn Youngkin 49% to 45% among likely voters in the first Emerson College/Nexstar Media poll of the Virginia gubernatorial race. Two percent (2%) of voters plan to vote for someone else, and 5% are undecided. Among those who are undecided, 63% lean towards Youngkin, and 37% lean towards McAuliffe. 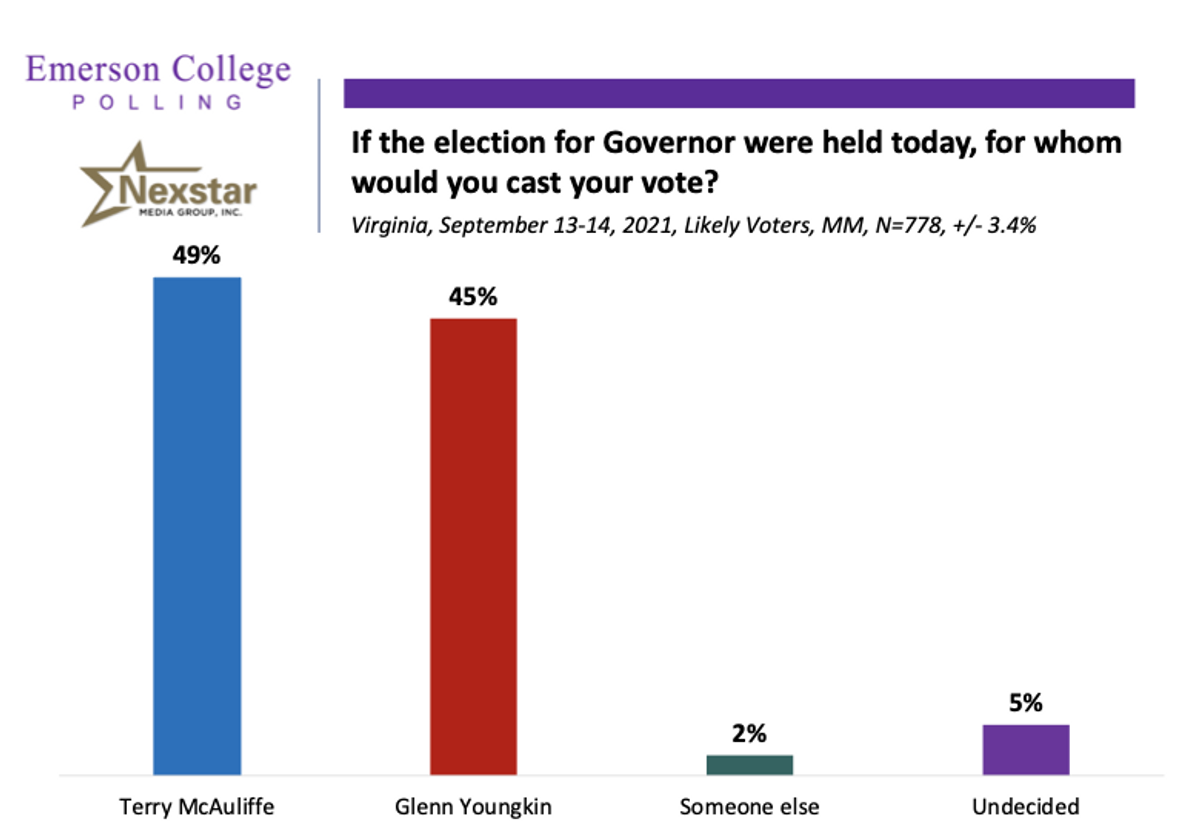 McAuliffe performs well with voters of color, capturing the support of 56% of Hispanic voters, 63% of Black voters, and 75% of Asian voters in the state. Conversely, Youngkin has the support of the majority (51%) of White voters.

Youngkin leads with Republicans (82% to 15%) while McAuliffe leads with Democrats (90% to 6%). Among Independents, the majority (54%) support Youngkin, compared to 35% who support McAuliffe and 9% who are undecided.

Eighty-four percent (84%) of voters indicate that they definitely plan to vote on their candidate, while 16% say there is still a chance they could change their mind before election day.

In the race for Attorney General, Incumbent Mark Herring leads Republican challenger Jason Miyares, 47% to 41%, while 2% of voters choose someone else and 11% remain undecided. Of those undecided, 58% lean in favor of Herring, and 42% lean in favor of Miyares.

On the issue of critical race theory, a strong majority (86%) of Virginians said they are at least somewhat familiar with debates on the topic in the state or their community. Ten percent (10%) are not very familiar, and 4% had never heard of the issue.

In a follow-up question, a plurality (47%) of voters said they would support state laws that banned teachings of critical race theory in Virginia public schools. Thirty-six percent (36%) said they would not support such a ban, and 17% were unsure or had no opinion on the issue.

The Virginia Emerson College/Nexstar Media Group poll was conducted September 13-14, 2021. The sample consisted of Virginia likely voters, n=778, with a Credibility Interval (CI) similar to a poll’s margin of error (MOE) of +/- 3.4 percentage points. The data sets were weighted by gender, age, education, race, and region based on 2020 turnout modeling. It is important to remember that subsets based on gender, age, party breakdown, ethnicity, and region carry with them higher margins of error, as the sample size is reduced. Data was collected via a cellphone sample using SMS-to-web, a landline sample using IVR, and an online panel provided by Amazon MTurk. 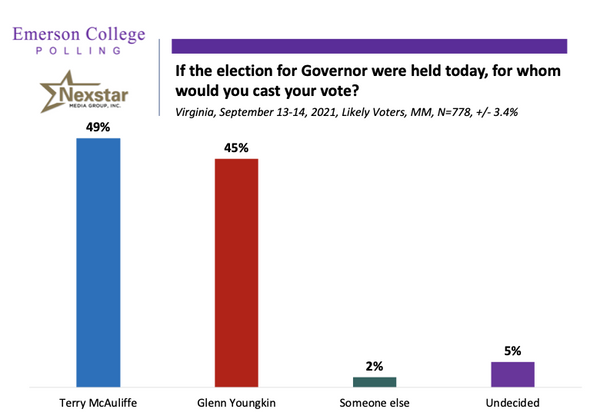