An Emerson College/The Hill poll taken one week out from the March 1 Texas primary election shows incumbent Governor Greg Abbott ahead in the Republican primary at 61%. Other candidates include Allen B. West (12%) and Donald Huffines (9%), with no other candidate above 3%, and nine percent of voters still undecided. When undecided voters are allocated to who they are leaning towards, Abbott extends his lead to 50 points, at 64%, followed by West (14%), and Huffines (11%). 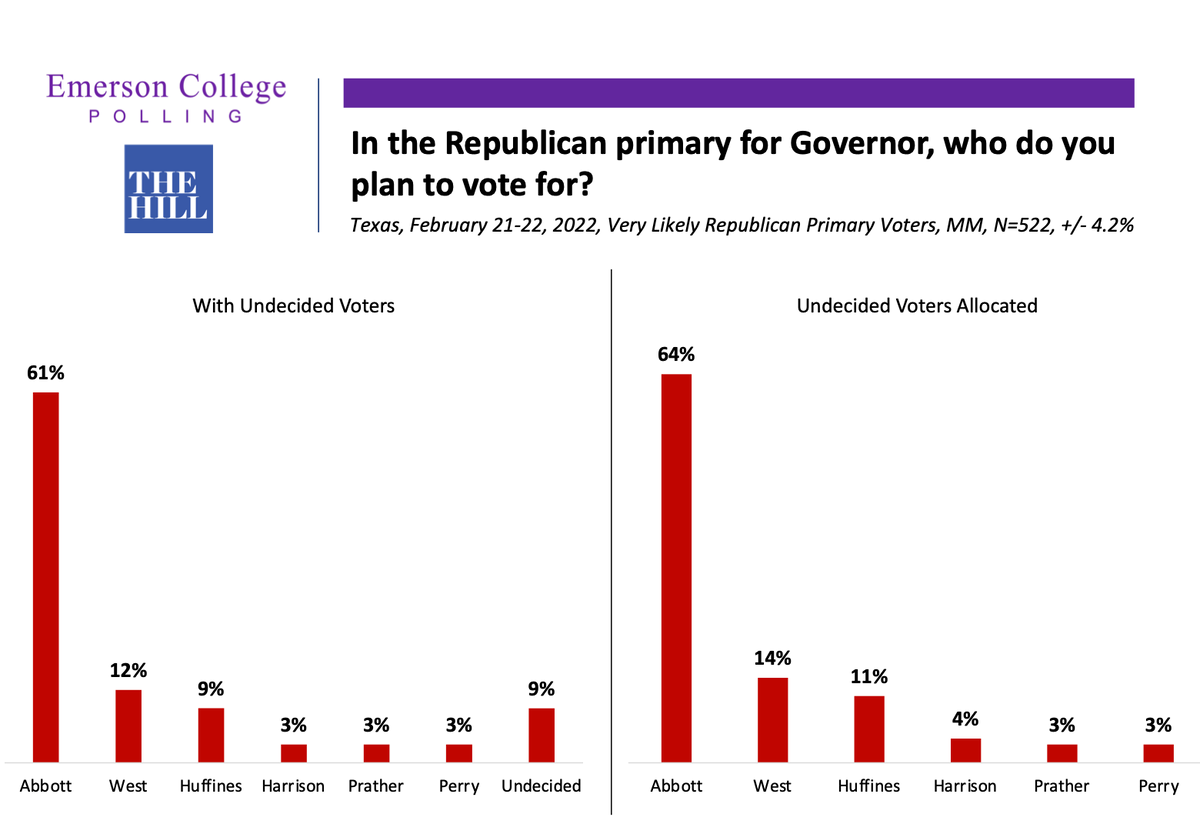 In the Republican primary for Attorney General, incumbent Ken Paxton leads with 43% of Republican voters’ support, followed by Texas Land Commissioner George P. Bush at 20%, Rep. Louie Gohmert at 12%, and former Texas Supreme Court Justice Eva Guzman at 12%. Fourteen percent (14%) are still undecided. When undecided voters are allocated to who they are leaning towards, Paxton expands his lead to 51%, which clears the 50% threshold needed to avoid a runoff. 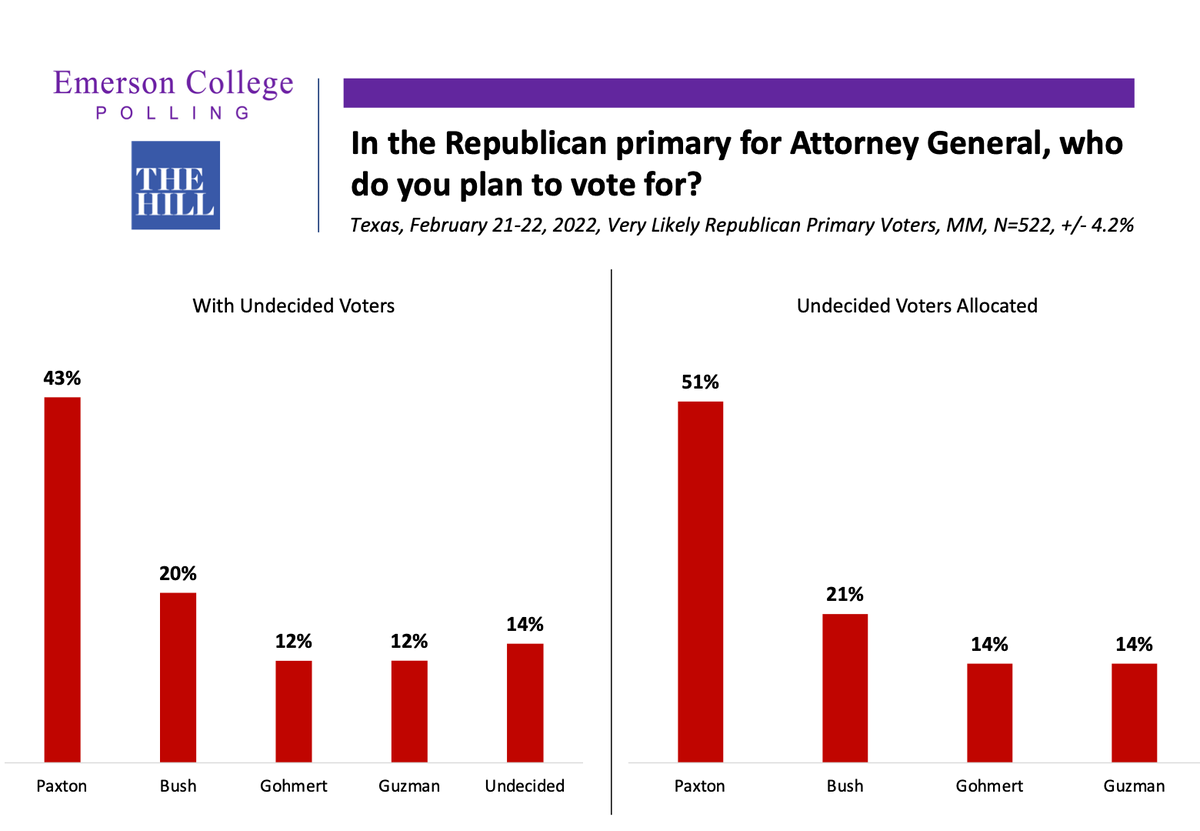 Spencer Kimball, Executive Director of Emerson College Polling (ECP) said, “Governor Abbott is poised to exceed the 50% threshold to clinch the Republican nomination and avoid a runoff. Attorney General Paxton is on the brink of capturing 50% and the nomination, but if he were to fall short of the threshold there does not appear to be a clear alternative in the runoff making him an early favorite to capture the nomination in May.”

A plurality of Republican primary voters (49%) say Donald Trump’s endorsement makes them more likely to vote for a candidate. Thirty-five percent (35%) said it has no impact on their vote while 16% said it makes them less likely to support a candidate. ECP’s Director of Survey Operations Isabel Holloway notes that "among undecided voters that lean towards Paxton, a majority cited a Trump endorsement as a factor that would make them more likely to vote for a candidate. Since Paxton secured Trump’s endorsement in June, it may be what gets him over the 50% threshold.”

In the Democratic primary for Governor, former US Representative and presidential candidate Beto O’Rourke leads the field at 78%, followed by Michael Cooper at 5%, and Joy Diaz at 4%. When undecided voters are allocated to who they are leaning towards, O’Rourke is at 82%, followed by Cooper (8%) and Diaz (5%).

In the Democratic primary for Attorney General, the field is led by former ACLU lawyer Rochelle Garza at 30%, followed by former Mayor of Galveston Joe Jaworski at 22%, and civil rights attorney Lee Merritt at 16%. Mike Fields and S “T-bone” Raynor are at 5% each, and 22% are undecided. When undecided voters are allocated to who they are leaning towards, Garza slightly extends her lead to 42%, followed by Jaworski (27%) and Merritt (19%). 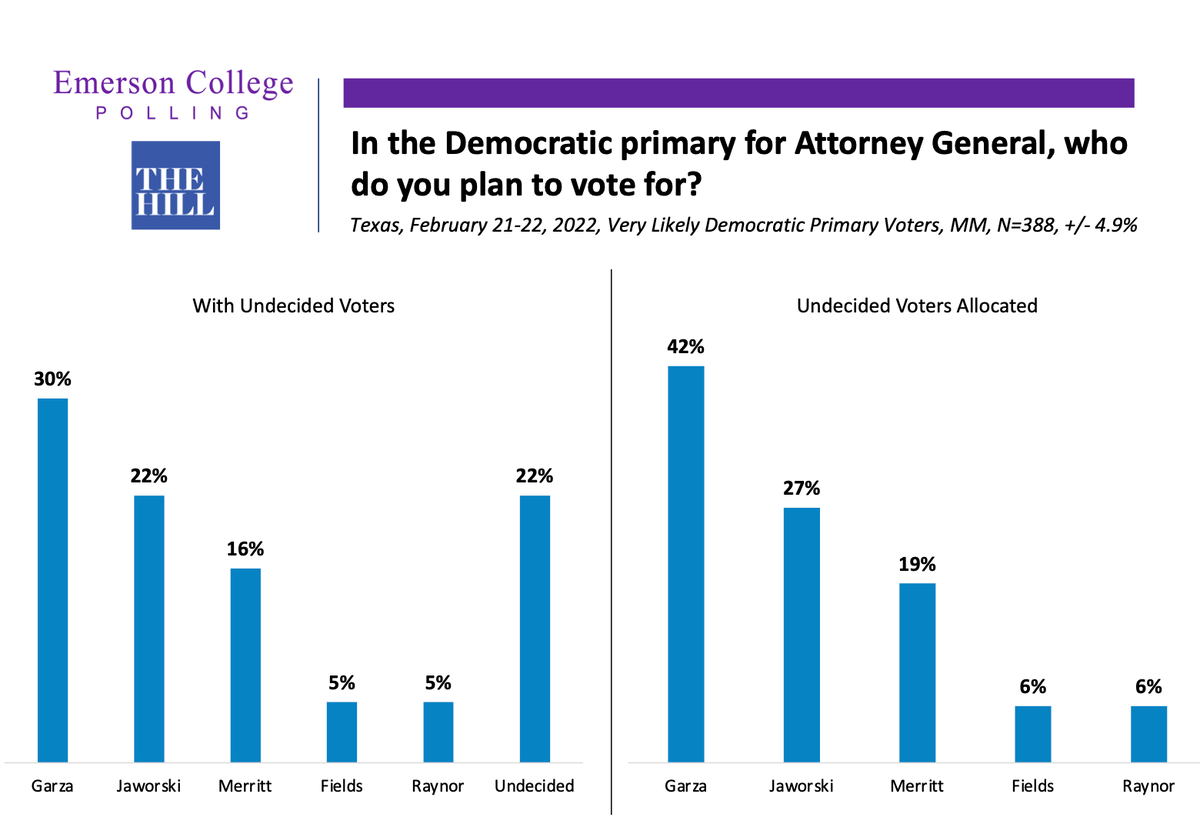 Kimball says “the nomination for the Democrat's AG candidate appears more in flux with Rochelle Garza holding an advantage but short of the 50% threshold needed to avoid a run-off. There appears to still be room for either Joe Jaworski or Lee Merritt to join Garza in the runoff”.

When asked about the top issue facing Texas, the plurality (26%) of Texas voters say immigration, followed by healthcare (14%), inflation (13%), voting rights (12%), and Covid-19 (12%). Other issues included education (10%) and taxes (6%). Among Republican primary voters, immigration ranked first among 41%, followed by inflation (17%). Among Democratic primary voters, voting rights led as the top issue at 25%, followed by healthcare (22%).

Regarding the Texas electrical grid, an overwhelming majority (82%) of voters are very (47%) or somewhat (35%) concerned about the electrical grid in Texas. Fourteen percent (14%) are not very concerned and 3% are not at all concerned.

President Biden’s job performance is underwater in the state, with a majority (53%) disapproving of the job he is doing as President, while 39% approve and 8% are neutral. 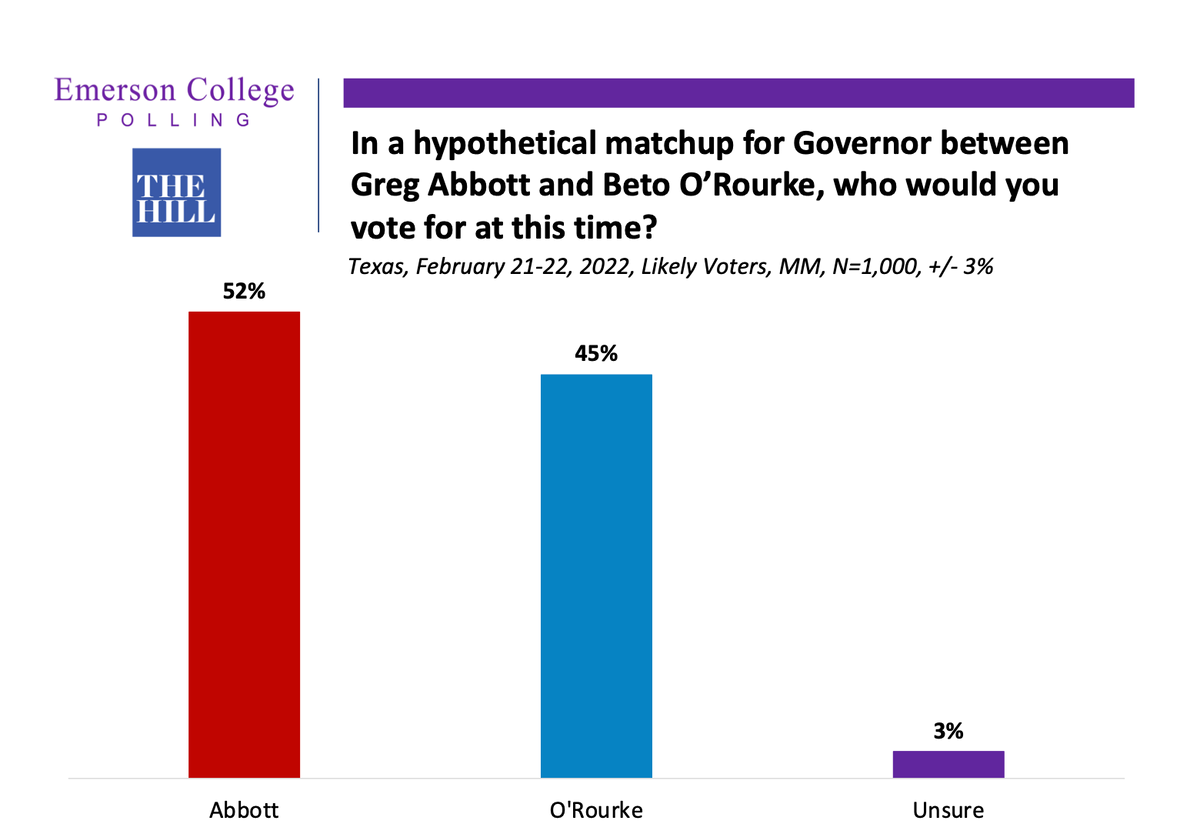 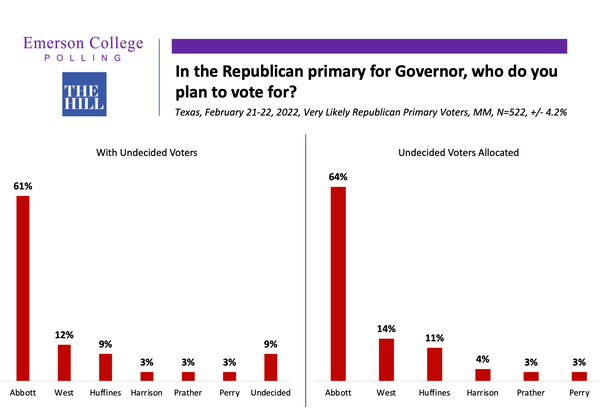 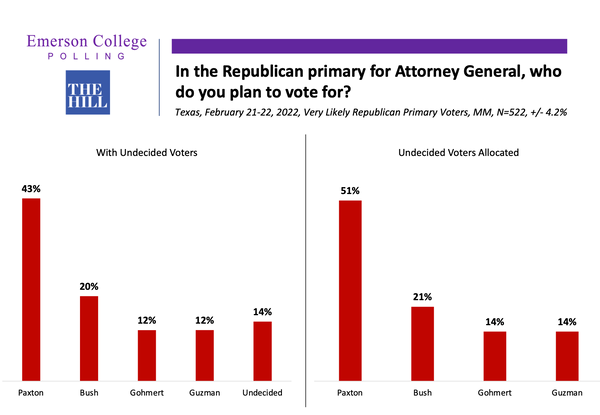 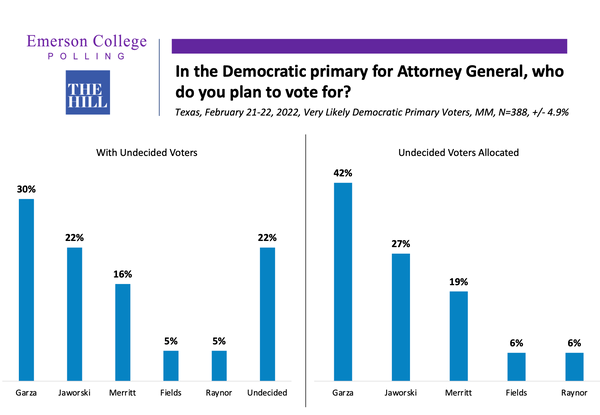 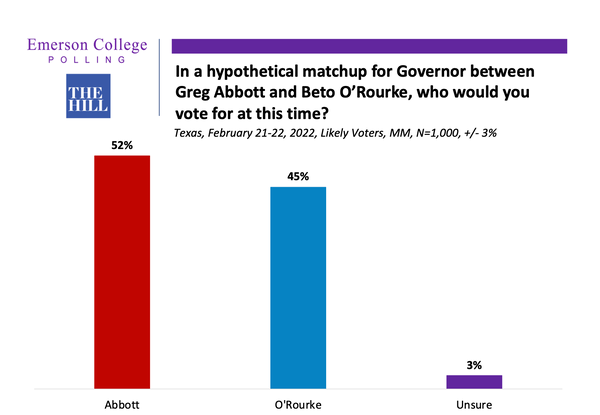