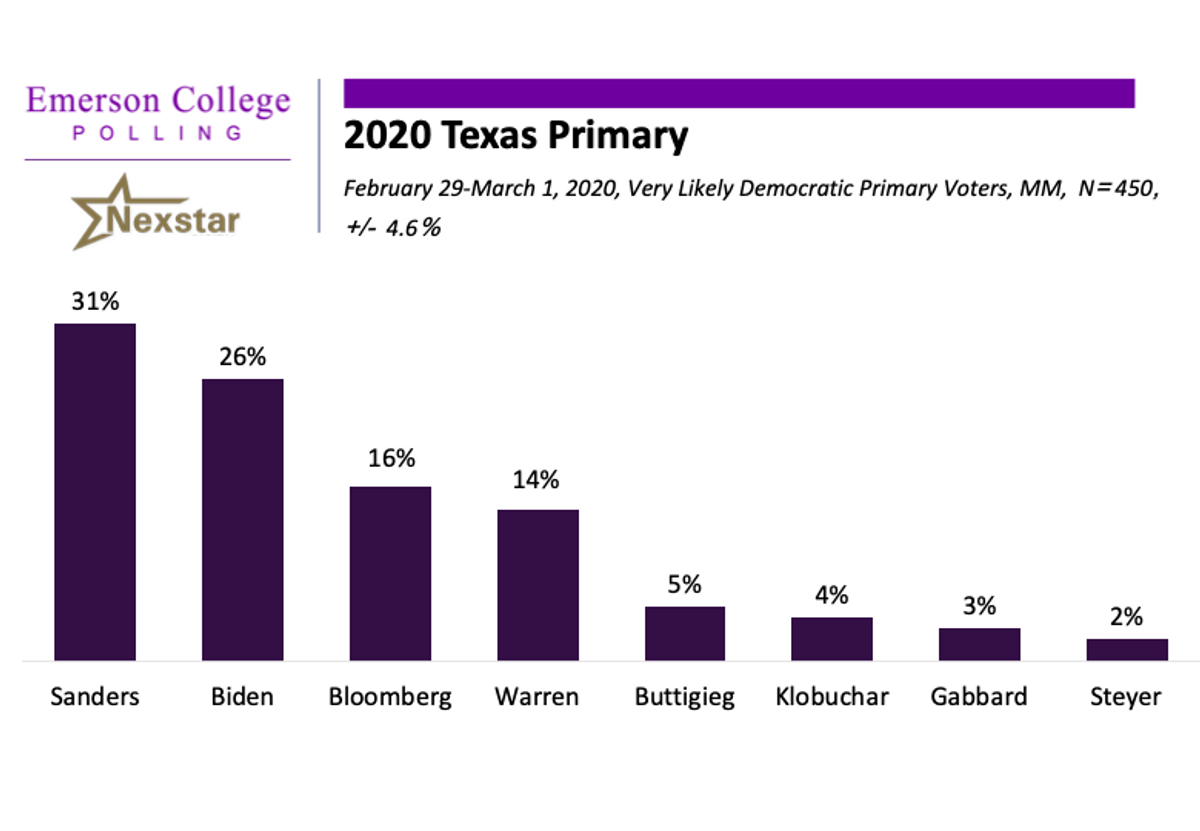 Compared to the last Emerson College poll of Texas in August, Sanders gained 15 points, Biden dropped two points, Warren fell three points, Klobuchar is up four points, and Gabbard moved up two points. Bloomberg had not announced his candidacy at the time of the previous poll.

Sanders’ strength continues to be among younger voters, as he garners 46% support from voters under the age of 50. Warren follows him among those voters with 15%, Bloomberg is at 13% and Biden is at 12% among under 50 voters. Biden has strong support from voters 50 and over with 40% support. Following him is Bloomberg with 20%, Sanders with 14%, and Warren with 13%.

Biden is doing better with late deciders as he is at 35% among voters who decided who to support sometime in the past three days. Sanders is at 23%, Warren is at 13%, and Bloomberg is at 10% among those same voters. 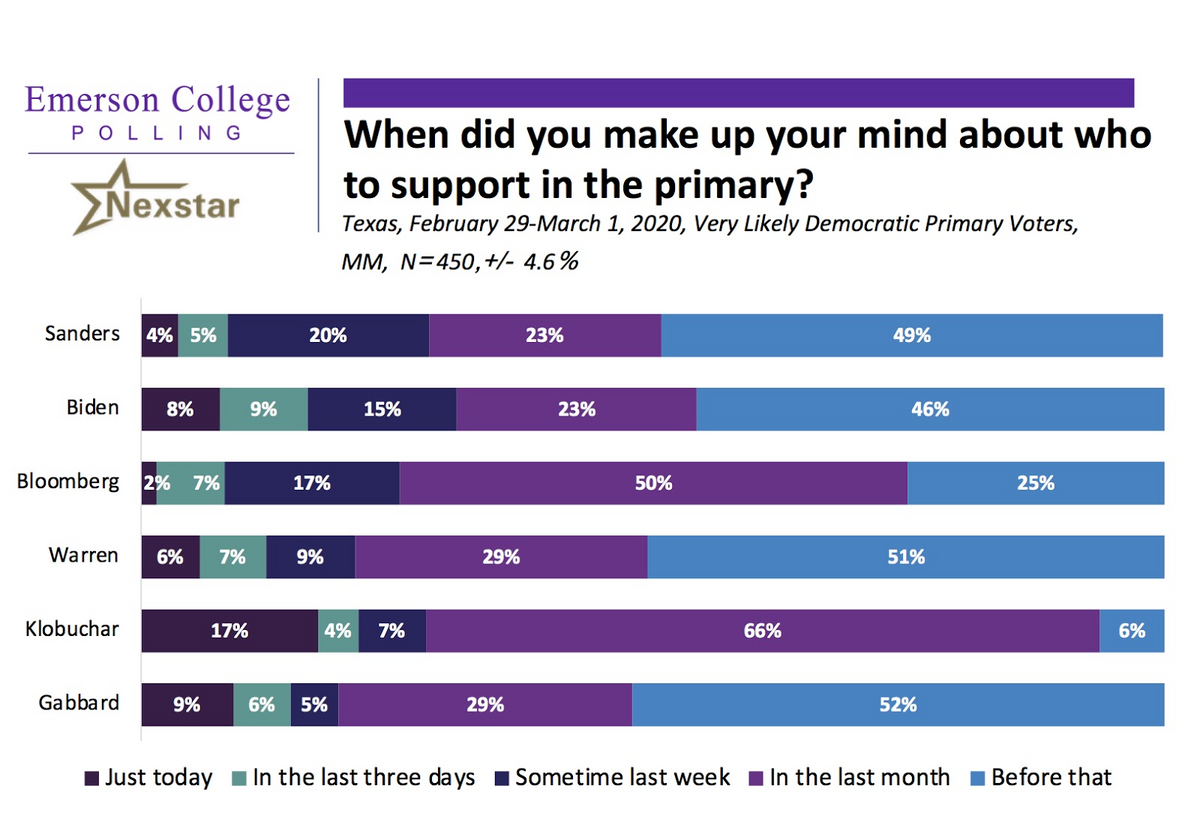 Respondents were asked if they would definitely vote for their preferred candidate; 36% said that they could still change their mind while 64% are definitely committed.

The plurality of Texas Democratic primary voters (39%) are undecided on who they will vote for this week in the primary election for the Democratic US Senate nomination. Sixteen percent (16%) plan to support MJ Hegar, 11% support Royce West, 8% Cristina Tzintzún Ramirez, 6% Chris Bell and 5% Cooper. All other candidates were under 5%. 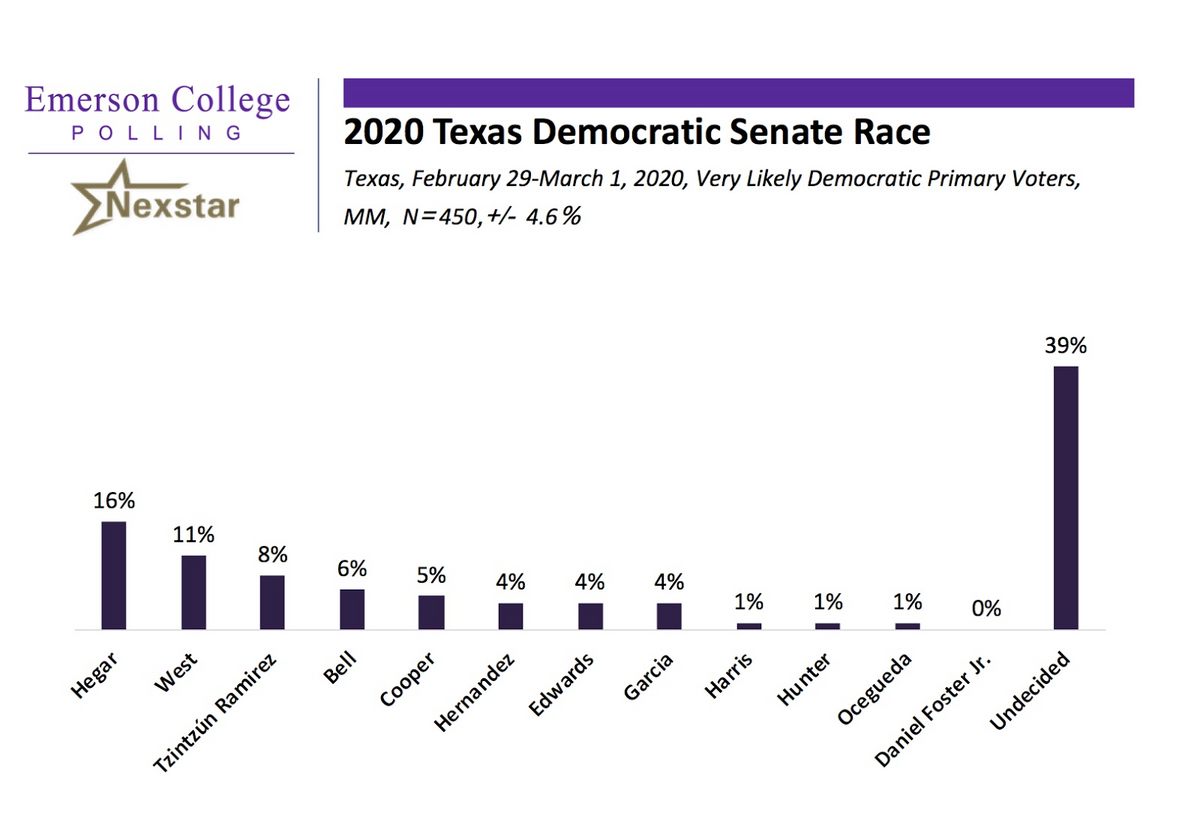 The majority of Texas Democratic primary voters (66%) do not think President Trump will be reelected for a second term, while 30% think he will be. When asked if they think a Democrat can win the state of Texas in the presidential election, 45% said yes, 29% said no, and 22% were unsure.

When asked if they believed the United States is prepared to control the increased risk of the Coronavirus, a majority (56%) responded no, 22% said yes, and 22% were unsure.

A majority (67%) believe that the current state of border security is adequate, while 33% believe it is inadequate.

Asked about a potential ban on hydraulic fracturing, also known as fracking, 45% said they would support a ban, 33% were opposed, and 22% were unsure.

The Texas Emerson College/Nexstar poll was conducted February 29-March 1, 2020. The sample for the Democratic Primary consisted of registered Democratic, Republican and Independent very likely voters, n=545, with a Credibility Interval (CI) similar to a poll’s margin of error (MOE) of +/- 4.6 percentage points. The data sets were weighted based on age, ethnicity, education, region, and party affiliation based on 2016 turnout model. It is important to remember that subsets based on gender, age, party breakdown, ethnicity and region carry with them higher margins of error, as the sample size is reduced. Data was collected using an Interactive Voice Response (IVR) system of landlines only (n=204) and an online panel provided by MTurk (n=246). 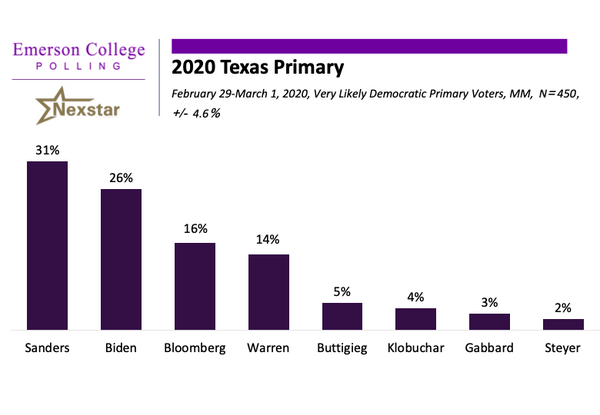 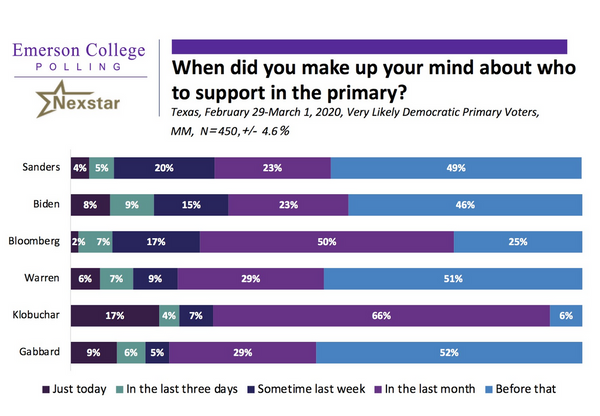 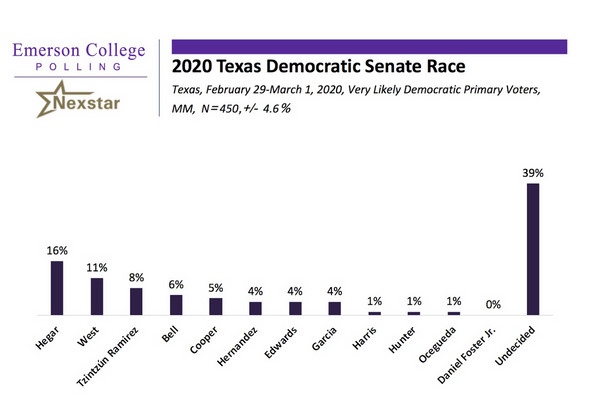