Researchers from Spain and the United States collaborated on a study focusing on perceptions, attitudes, and behaviors of their respective populations during the COVID 19 crisis. The study, by the Emerson College (Boston)/ Blanquerna School of Communication and International Relations Center for Global Communication, compares the new survey in Spain with surveys of the entire United States and of the State of New York.

The study reveals differences between the two countries, as 81% of residents in Spain are confident that their healthcare system will effectively respond to the Coronavirus, compared to only 62% of Americans reporting confidence in their local hospitals to effectively handle the outbreak of Coronavirus (Emerson College/Nexstar National and New York Surveys). 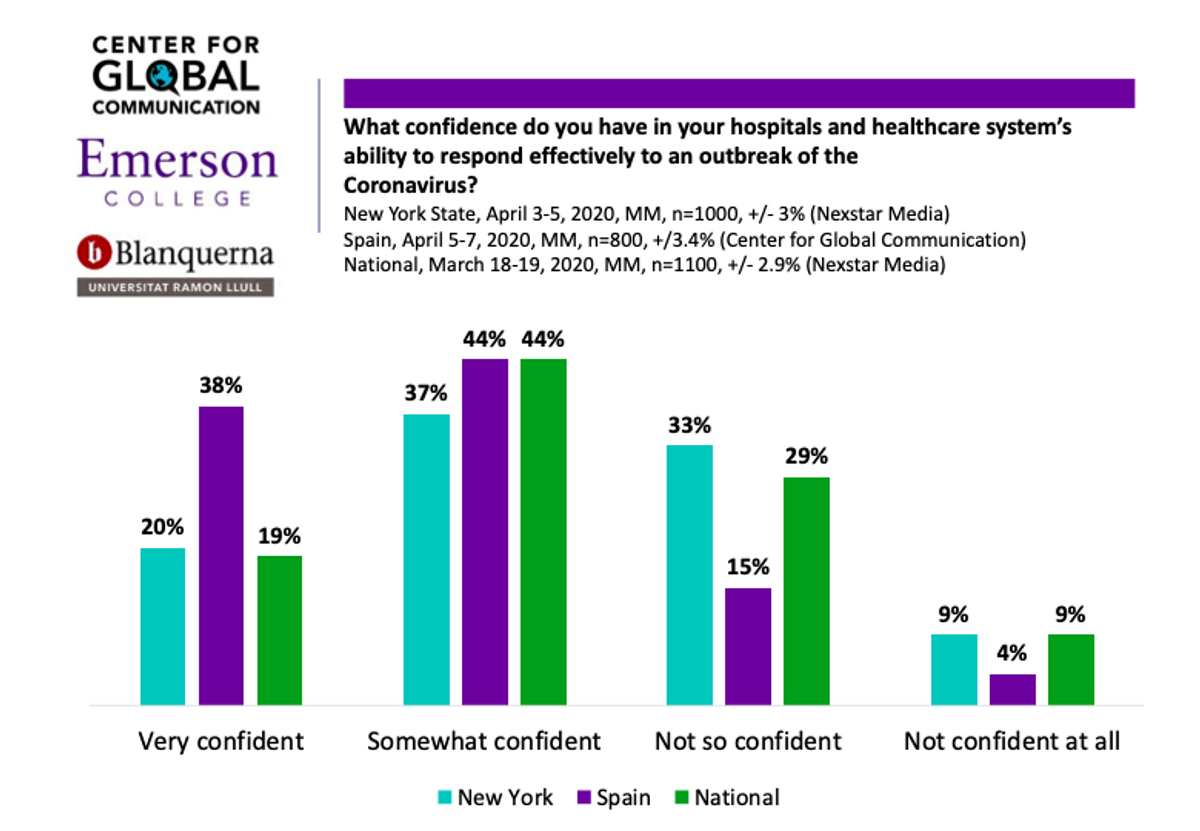 Dr. Enric Ordeix, co-director of the Center for Global Communication notes that “the data suggests that people in Spain are more confident with their universal healthcare program than the people in the US are with American healthcare." 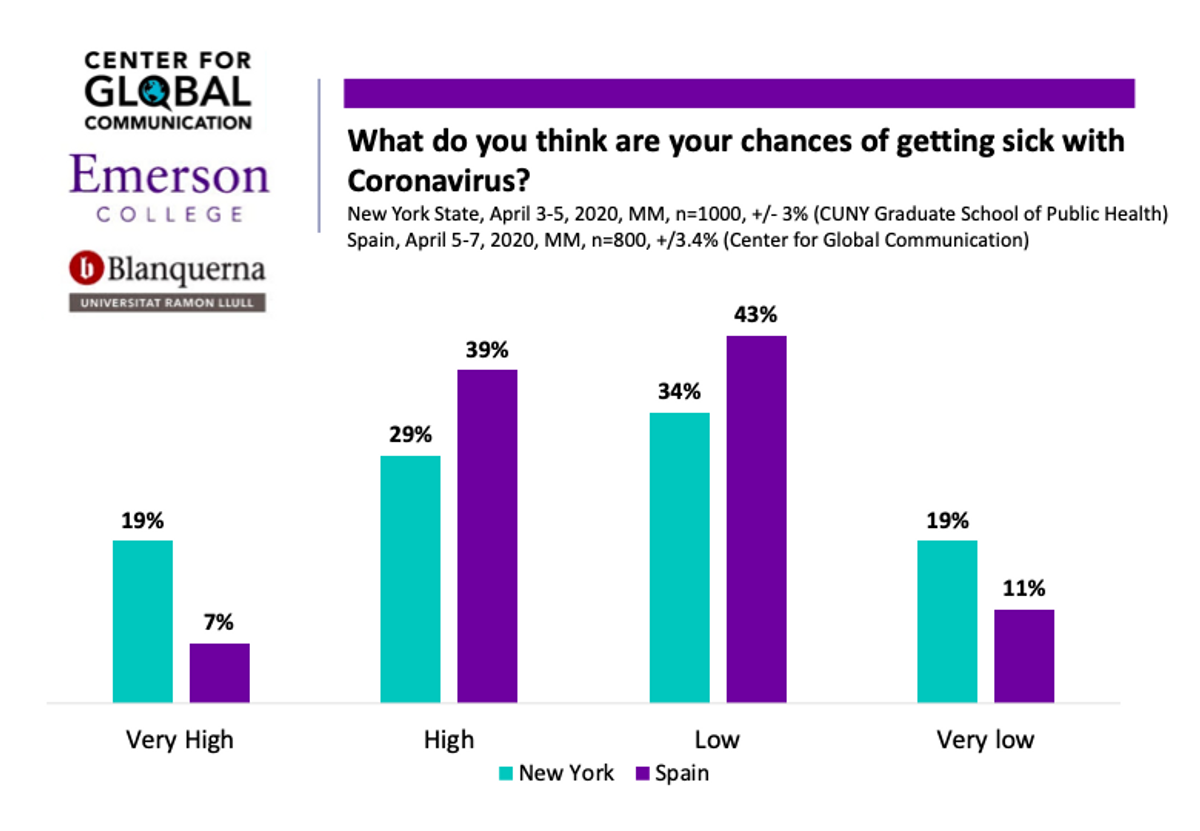 In both Spain and New York, the same percentage - 1 in 10 people - report having someone at home with a fever or symptoms that are caused by Coronavirus. 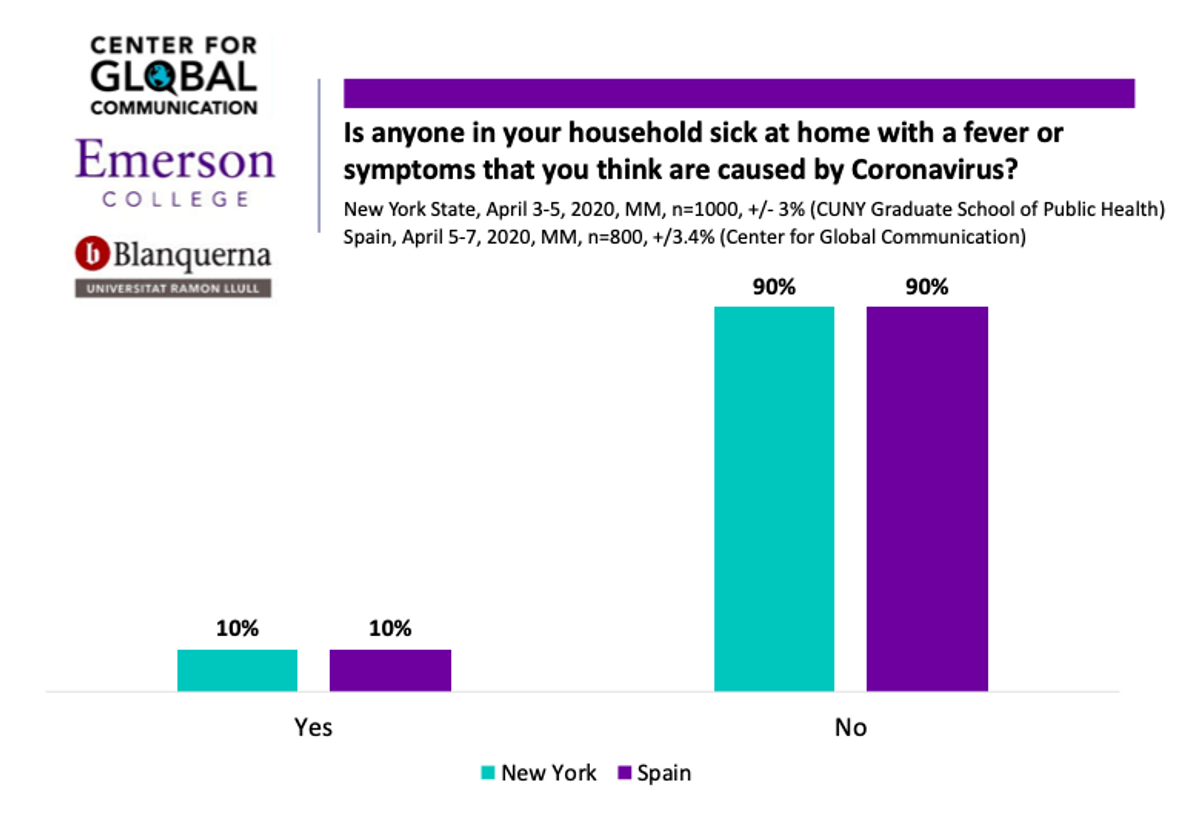 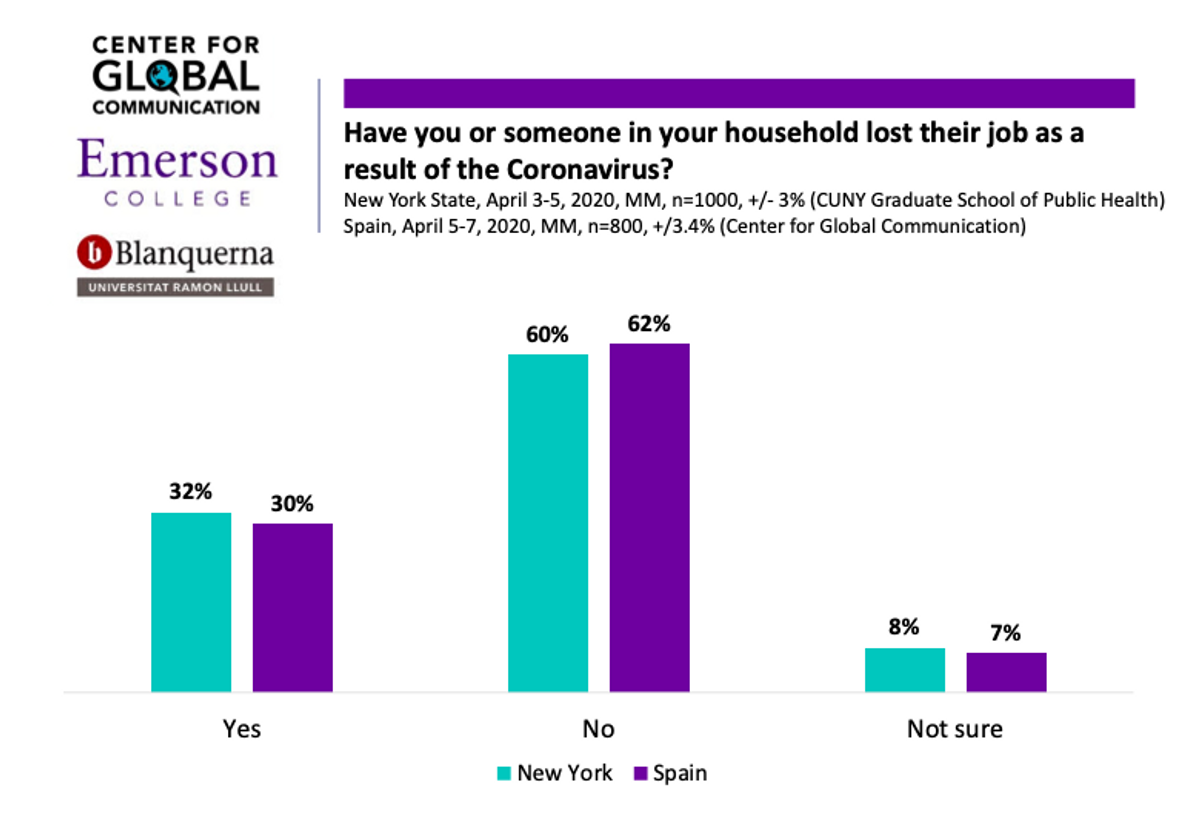 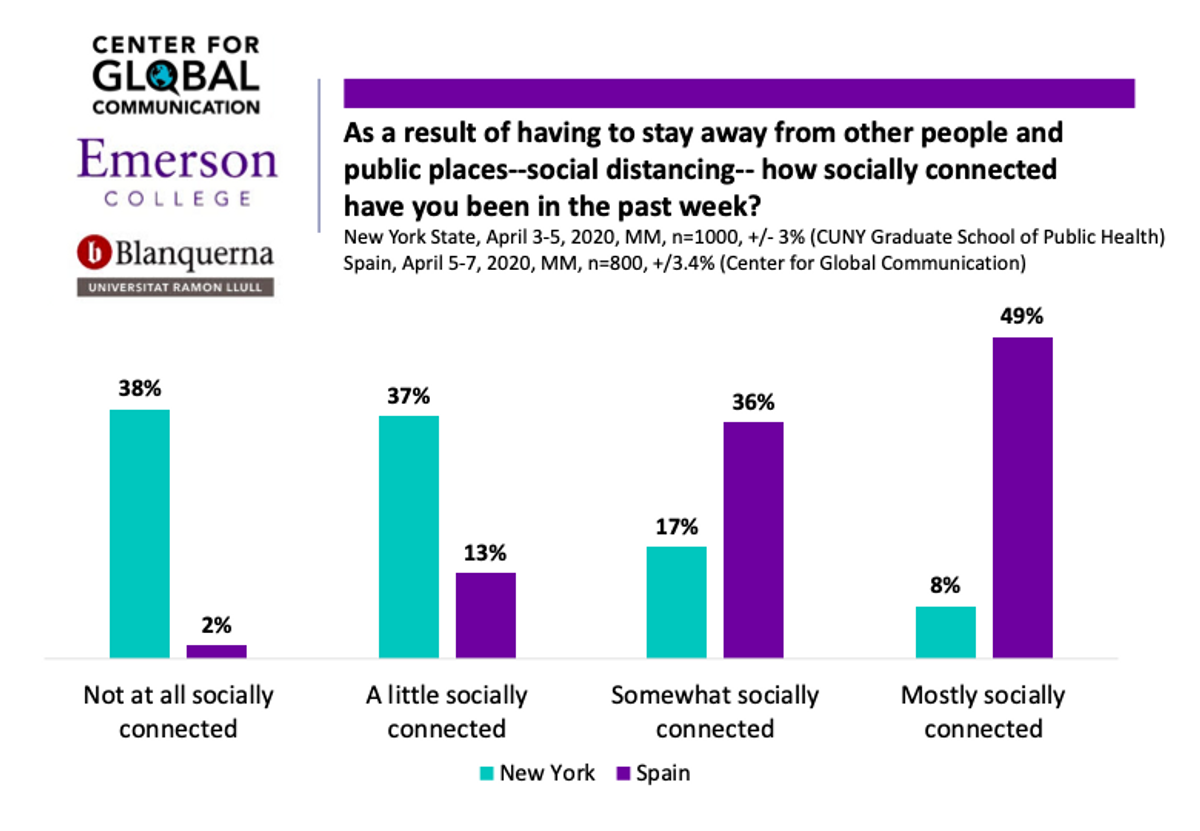 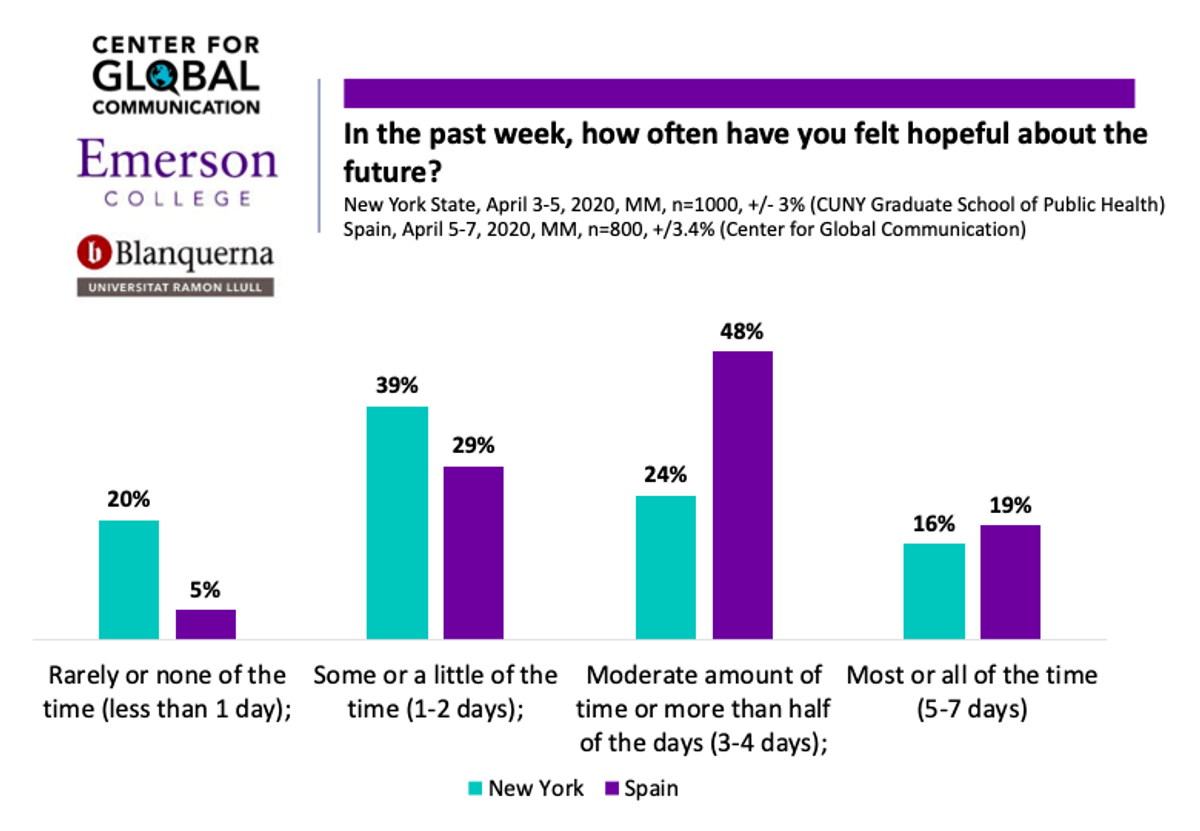 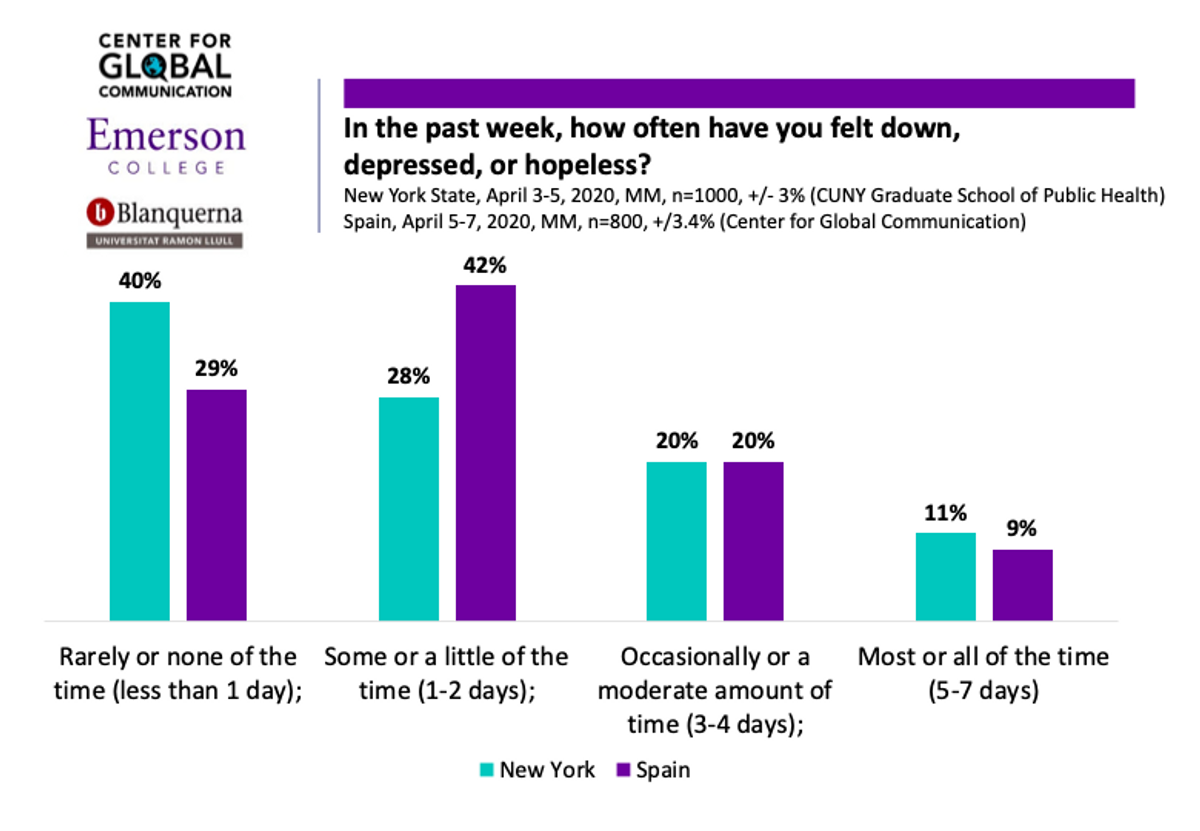 Dr. Gregory Payne, co-director of the Center for Global Communication notes that “while difficult to compare cross-cultures, Spain and New York share similar circumstances in regards to the perception of catching the virus, people at home sick with the virus and about the same rate of job loss. However, Spain appears more positive and hopeful at this time about the future. This suggests that perhaps Spain is a few weeks ahead of New York, and in time New Yorkers’ anxiety will wane, or perhaps that the cultural differences and values are impacting these differing reactions to the crisis.”

A majority, 56% of those polled in Spain do not believe life will return to how it was before the virus. Similarly, 54% of people in New York concur that life won’t be the same. 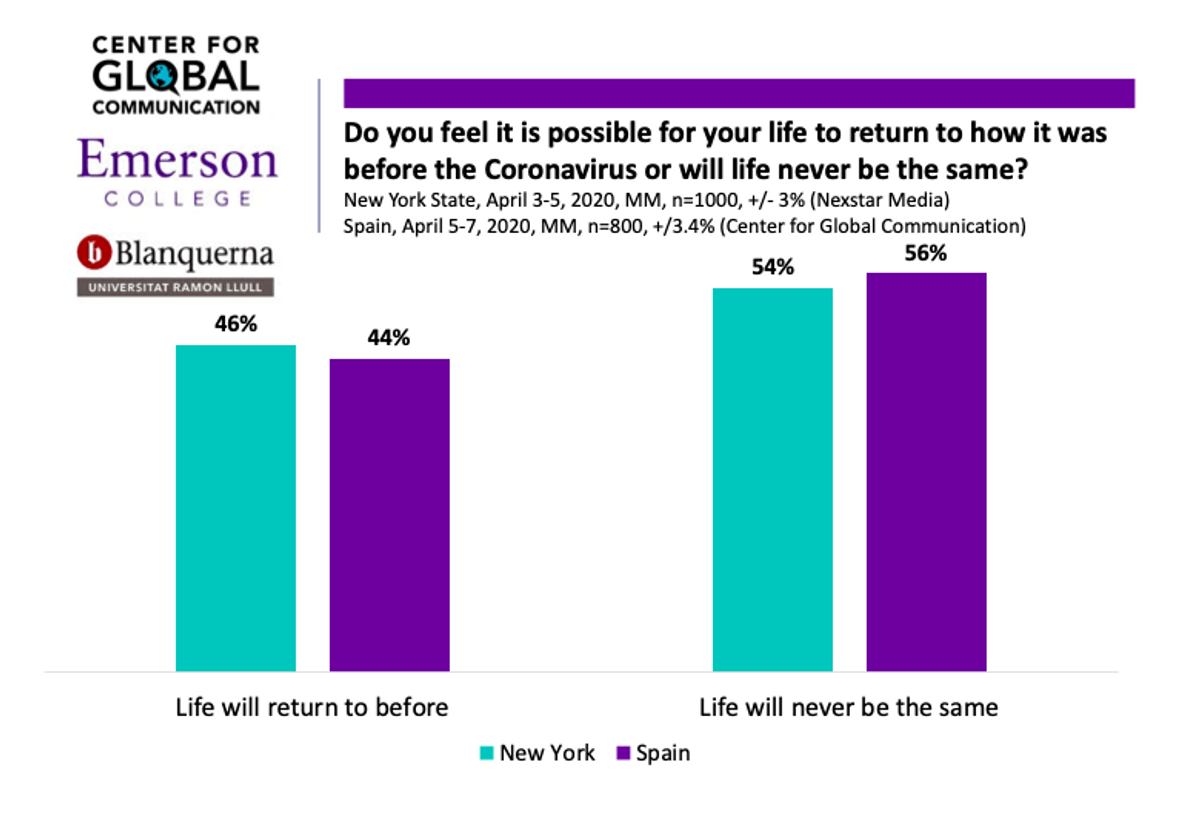 Nearly 2 out of every 3 people in Spain think daily life will be disrupted for at least 2 more months; 17% think the disruption will be 4 months or longer. In comparison, in New York, about 50% of people believe it will last another 2 months with 27% saying the disruption will last longer than 4 months. 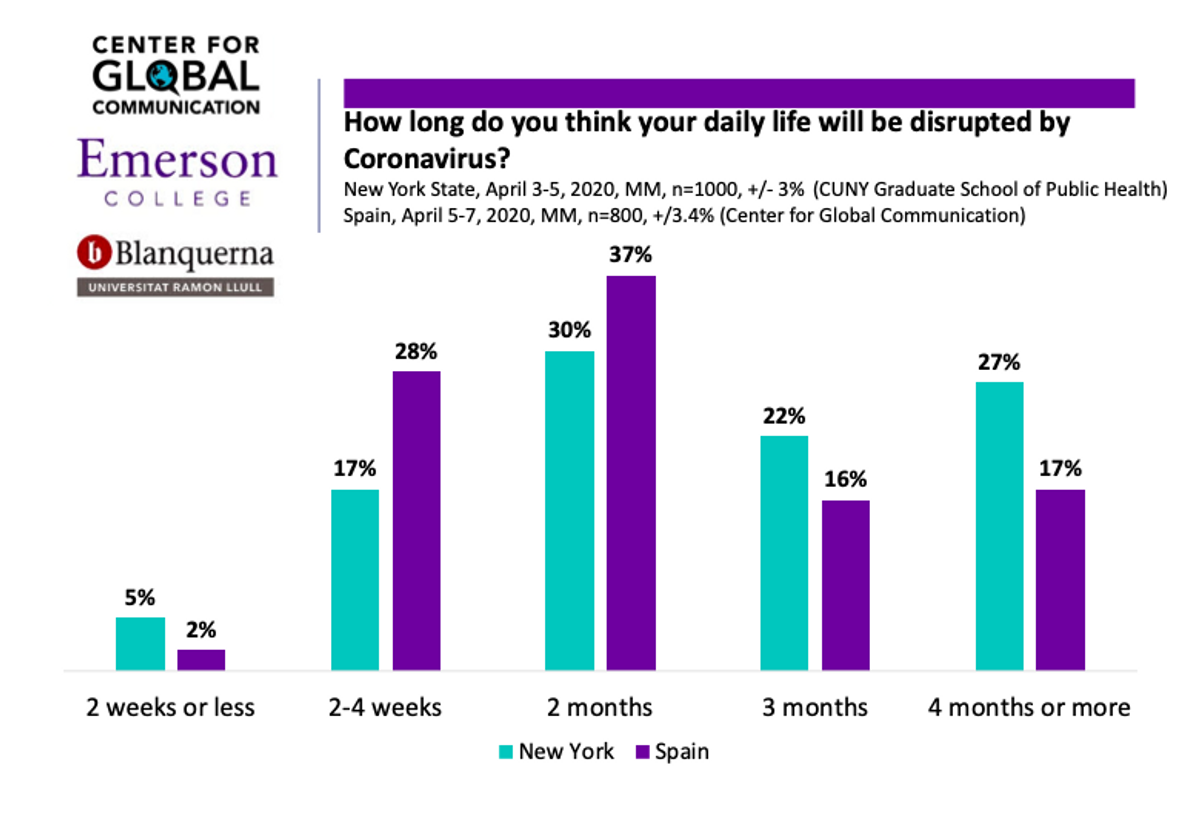 Sources and Trust in Spain

A majority of those surveyed in Spain get their news about Coronavirus from television: TVE was their most trusted news outlet with 26%, followed by LeSexta at 18%, Telecinco at 11% and television “of my autonomous community” at 10%. No other station had above 10%.

The most trusted TV news outlet for Coronavirus information is TVE with 26%, followed by LaSexta with 18%, and Antena 3 with 16%. 11% trust Telecinco the most, 10% trust the television of their autonomous community, 4% trust BBC, and 3% trust Cuatro, while 8% trust other Spanish networks the most and 5% trust other global networks the most.

Respondents were asked a series of questions about their levels of trust for certain organizations about information regarding coronavirus. Overall, among those polled on the issue of “trust,” Health experts received support of 91%, the Spanish Government 42%, Autonomous Government 44%, Global Organization, 44%, European Union 37%.

Those 65 years of age or older overwhelmingly put their trust in health experts with 78% trusting. 30-49 year olds were the least trusting, with only 41% who trust the health experts a lot.

There is general approval for the way the Spanish Government is handling the response to the outbreak: 45% approve and 37% disapprove, 18% undecided.

Approval for the Autonomous Governments handling was better, with 49% approval, 30% disapproval and 21% undecided.

56% of respondents in Spain believe life will never be the same after the Coronavirus pandemic. 44% were more confident in saying that life will return to normal once the outbreak ends.

Men were slightly more optimistic than women, as 23% of women and only 13% of men think that the disruption to daily life will continue for 4 or more months.

Respondents had a strong amount of confidence in their healthcare system, with 38% claiming to be very confident, 44% somewhat confident, 15% not so confident, and just 4% not confident at all.

The majority of respondents in Spain have a moderate level of knowledge about COVID-19. 30% report that they know a lot about it, while 62% said they know somewhat about it, and just 8% claim to know very little.

Younger people were much more likely to say they have some knowledge about Coronavirus, with only 4% that know very little in the 18-29 age group. In contrast, 14% of 65 and older respondents said they knew very little about the outbreak.

The Center for Global Communication COVID-19 Spain survey was conducted April 5-7, 2020. Data was collected through an online panel April 5-7th provided by Dynata Market Research located in Madrid, Spain. Data was analyzed by Emerson College Polling from Boston, Massachusetts and Blanquerna School of Communication and International Relations, Ramon Llull University in Barcelona, Spain. The sample was n=800 nationwide with a +/-3.4% credibility interval. Data from Spain was compared to other Emerson College Polling collaboration surveys of the United States and the state of New York.. The US and New York State survey samples each consisted of n= 1,000 residents, with +/- 3% credibility intervals. 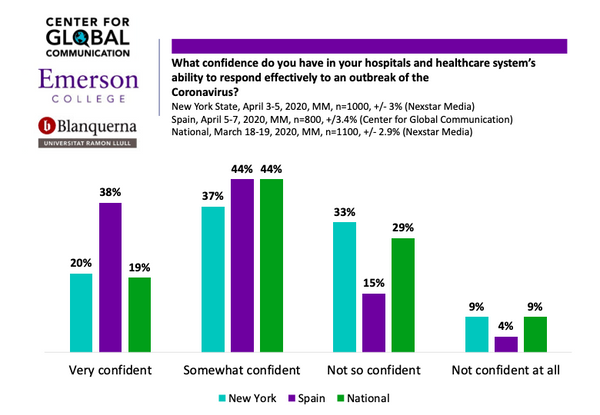 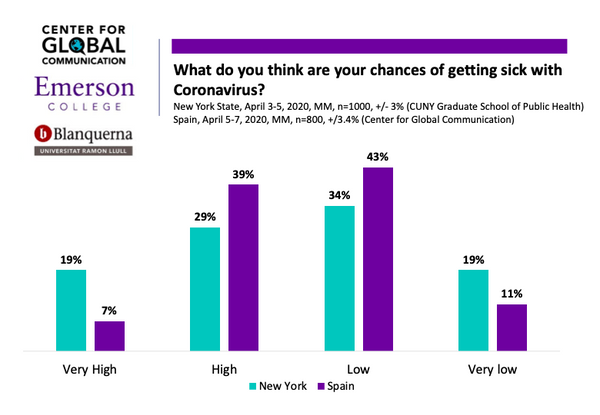 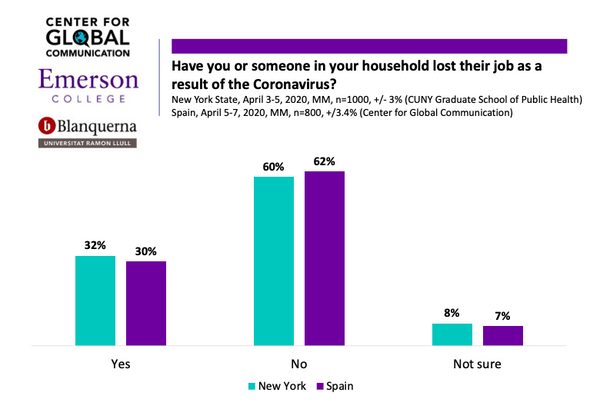 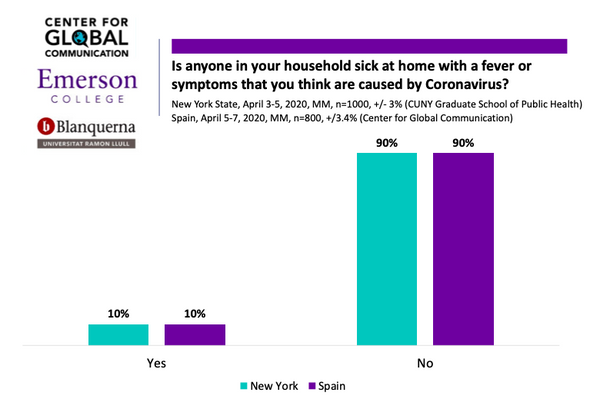 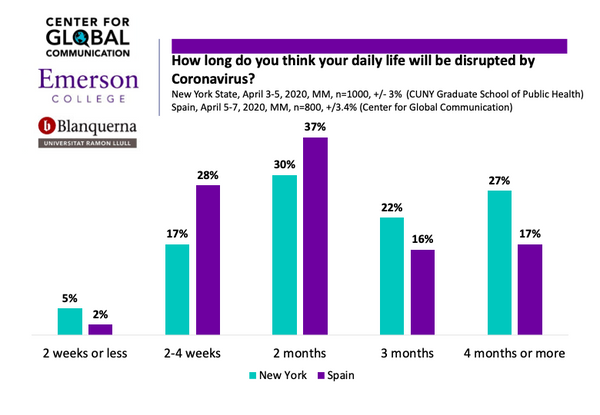 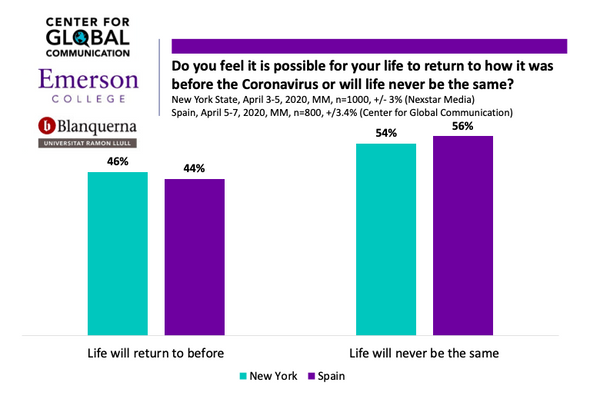 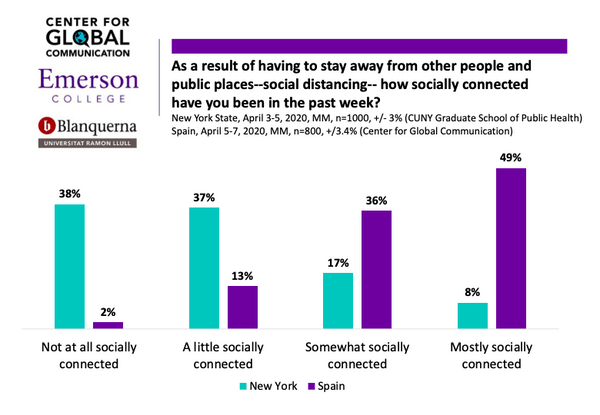 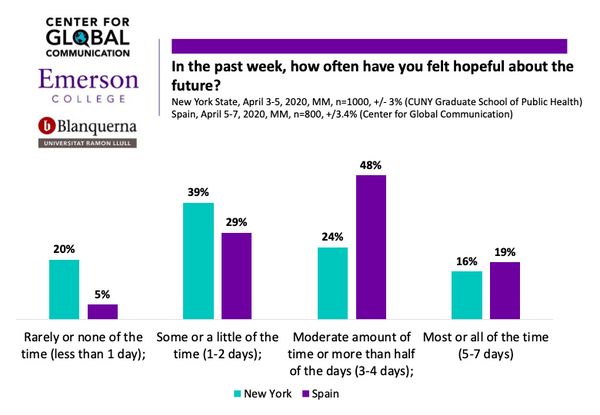 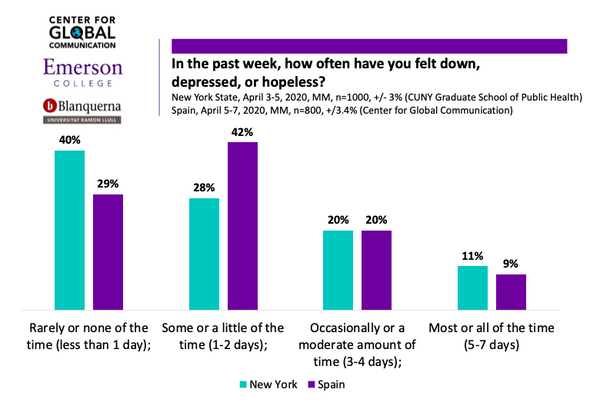