March 2, 2019 -- One year out from the South Carolina primary, former Vice President Joe Biden and Senator Bernie Sanders are the only two candidates to reach double digits in the Democratic Primary for President. Biden leads with 37% of the vote, followed by Sanders with 21%. Kamala Harris comes in third with 9%, Cory Booker has 6%, while Beto O’Rourke and Elizabeth Warren both receive 5%. The poll was conducted February 28-March 2, 2019, n=291, +/-5.7%.

It appears Harris has some work to do in South Carolina, particularly within the African American community. Among African American Democratic primary voters Biden leads with 43% of the vote, Sanders captures 15% of this vote with Harris at 9% and Booker at 7%. On the issue of reparations for African Americans, 31% of respondents agree with the policy while 46% disagree. But, Professor Spencer Kimball says “this issue is not helping Harris with South Carolina Democratic primary voters; while 79% of them support reparations, they are breaking for Biden nearly 4:1.”

In potential head to head general election match-ups, Trump appears to start with a slight advantage over his prospective rivals (n=755, =/-3.5%).

When Howard Schultz is added to the ballot, he pulls away points from both candidates, but slightly more against Warren, increasing Trump’s lead over her from 8 points to 12 points. Against Sanders, Trump's lead ticks up about a point from an 8 point lead to 9 points when Schultz is added. Professor Spencer Kimball notes that “this continues a pattern in recent polls where Schultz appears to draw more votes away from the female Democratic candidates than their male counterparts.”

Republican US Senator Lindsey Graham might have some election trouble in 2020, with 52% saying it’s time to give someone else a chance and 48% saying he should be re-elected. However, beating Graham in a Republican primary might prove difficult. He has 70% support within his party primary, but he is losing independents 60% to 40%.

The South Carolina Emerson College poll was conducted February 28- March 2, 2019 under the Supervision of Professor Spencer Kimball. The sample consisted of registered voters, n=755, with a Credibility Interval (CI) similar to a poll’s margin of error (MOE) of +/- 3.5 percentage points. The data was weighted based on 2016 voter model, age, ethnicity and region. It is important to remember that subsets based on gender, age, party breakdown, ethnicity and region carry with them higher margins of error, as the sample size is reduced. Data was collected using both an Interactive Voice Response (IVR) system of landlines only (n=423) and an online panel provided by Amazon Turk and Dynata (n=332). Visit our website at ​www.emersonpolling.com​. 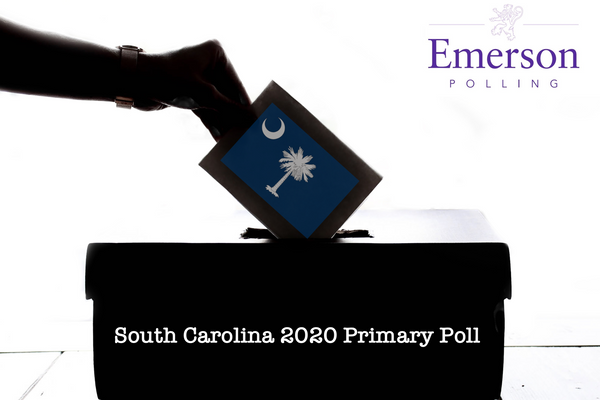 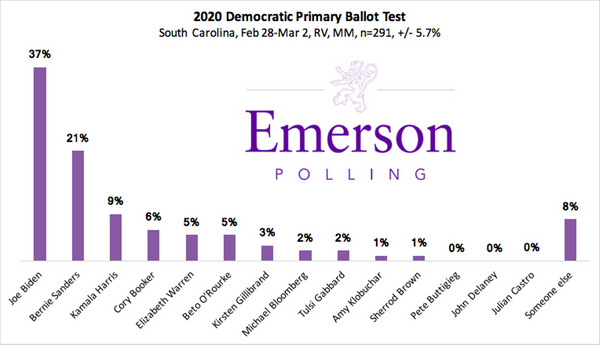 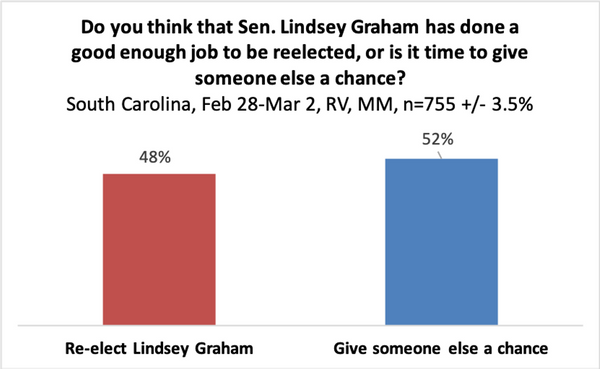 Republican US Senator Lindsey Graham might have some election trouble in 2020.
Files