A final Emerson College Polling/Nexstar South Carolina poll finds former Vice President Joe Biden at 41%, Senator Bernie Sanders at 25%, and former Mayor Pete Buttigieg and Businessman Tom Steyer tied at 11% each. Senators Amy Klobuchar and Elizabeth Warren are at 6% and 5% respectively, with Congresswoman Tulsi Gabbard at 2%. Data was collected on February 26 and 27, 2020, n=550, +/-4.1%. 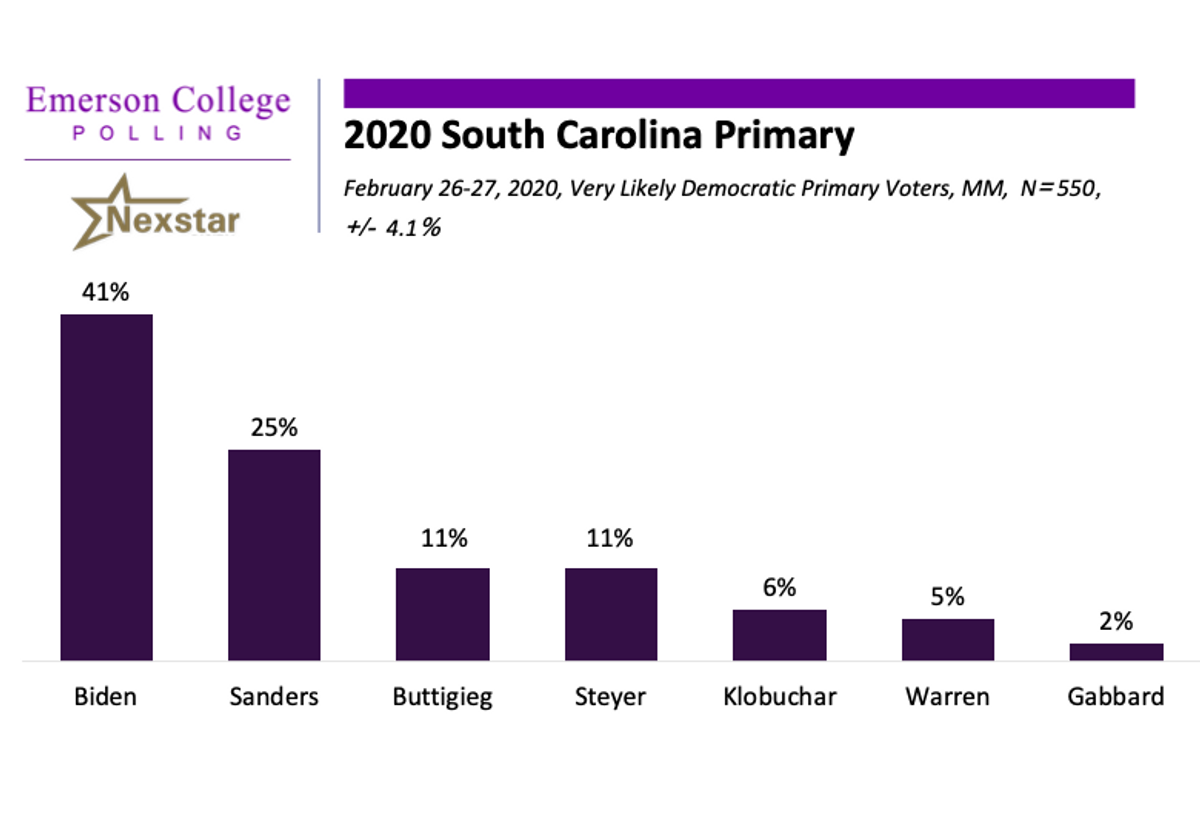 Compared to the last Emerson College poll of South Carolina from March 2019, Biden and Sanders have risen four points each, Buttigieg has gained 11 points, Klobuchar has gained five points, and Warren and Gabbard have maintained the same level of support. Steyer had not announced his candidacy at the time the poll was conducted.

Spencer Kimball, Director of Emerson College Polling, said “South Carolina looks like it will be the strong firewall Biden has been waiting for. If this is the case, the question will be if this is a game-changer or merely a speed bump for Sanders on his way to the nomination”.

Nearly half of voters, 45%, said they had decided who they would vote for before the Iowa Caucus while 19% said they have decided in the last few days. Of voters who decided who to support before this month, Biden has 39% support and Sanders has 37% support. While among voters who decided sometime in the past month, Biden leads with 43% support, and Sanders is at 15% support.

Biden also has strong support among African-Americans, leading with 48% support. Next among black voters is Sanders with 27%, Steyer with 12%, Buttigieg with 6% and Warren and Klobuchar with 3%. Among white voters, Biden also leads but by a smaller margin with 30% support, followed by Sanders with 24%, Buttigieg with 18%, Klobuchar with 10%, and Steyer and Warren with 8%.

Biden has received the majority of voters who went with Hillary Clinton in the 2016 Democratic primary at 56%. Twelve-percent (12%) of Clinton supporters are supporting Sanders this time around, while Buttigieg and Steyer have 10% each, followed by Warren with 7% and Klobuchar with 5%. Fifty-seven percent (57%) of South Carolina voters who supported Sanders in 2016 are still planning to vote for him, 19% are voting for Biden, 14% are voting for Steyer, 8% are voting for Buttigieg, and 3% are voting for Warren. Sanders is getting the most voters who either didn’t vote in 2016, or voted for someone else.

Looking at ideology, Sanders leads among “very liberal” voters with 45% support followed by Biden and Steyer with 15%, and Warren with 13%. Among “somewhat liberal” voters, Sanders also leads with 37% support, followed by Biden with 31%, and Buttigieg with 19%. And among “moderate” or “conservative” voters, Biden has a large lead with 53% support, followed by Sanders with 15%, Steyer with 12% and Buttigieg with 9%.

After securing the endorsement of Representative Jim Clyburn yesterday, Joe Biden performs his strongest in the sixth district with 65% of the vote, followed next by Sanders at 13%.

The majority of South Carolina voters (67%) tuned in to the debate Tuesday night. Among those who watched, 39% said Biden performed the best, followed by 18% who thought Sanders performed the best. Twelve-percent (12%) said Buttigieg, 11% Steyer, 10%, Klobuchar, 6% Warren and 3% said Bloomberg. 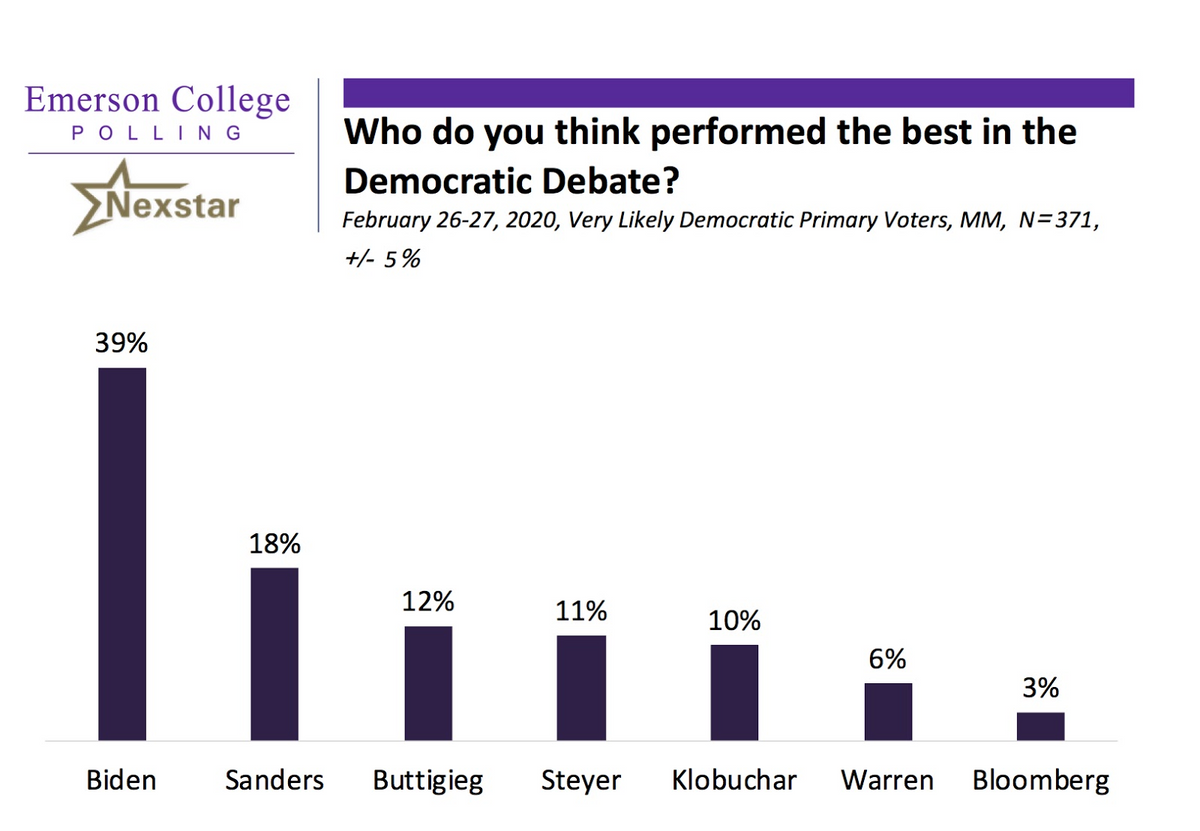 Respondents were also asked if they would support former New York City mayor Mike Bloomberg if he was on the ballot. Overall, 21% of voters said they would have voted for Bloomberg if he had been on the ballot in South Carolina. Bloomberg takes nearly half of his support from Biden voters (43%) and about 12% from Sanders. The remaining support is taken from Klobuchar, Steyer, and Buttigieg.

Spencer Kimball, Director of Emerson College Polling, points out “Bloomberg’s stated goal is to keep Sanders from getting the nomination, yet this poll suggests his strategy might actually benefit Sanders by splitting the moderate vote.”

Respondents were asked which candidate had the best record on criminal justice reform, and Joe Biden’s record was most popular at 39%, with Bernie Sanders following at 23%. The other candidates trailed behind, with Elizabeth Warren’s record gaining 7%, Pete Buttigieg and Tom Steyer at 5%, and Amy Klobuchar at 4%. 14% of respondents said someone else has the best record on the issue.

When it came to the single most important issue that would inform the voters’ decisions on who to support, health care was the most popular, at 29%, followed by the economy at 20%, and impeachment at 10%. Education and social issues had 9% apiece, followed by gun control and the environment at 8%, immigration at 4%, and foreign policy and terrorism at 3%.

Additional questions and results will be released Friday morning, February 28, 2020.

The South Carolina Emerson College/Nexstar poll was conducted February 26-February 27, 2020. The sample for the Democratic Primary consisted of registered Democratic, Independent and Republican very likely voters, n=550, with a Credibility Interval (CI) similar to a poll’s margin of error (MOE) of +/- 4.1 percentage points. The data sets were weighted based on gender, age, ethnicity, party, education, region, and mode based on 2016 turnout model. It is important to remember that subsets based on gender, age, party breakdown, ethnicity and region carry with them higher margins of error, as the sample size is reduced. Data was collected using an Interactive Voice Response (IVR) system of landlines only (n=275), cell phones (n=93) and online panel provided by MTurk (n=182). 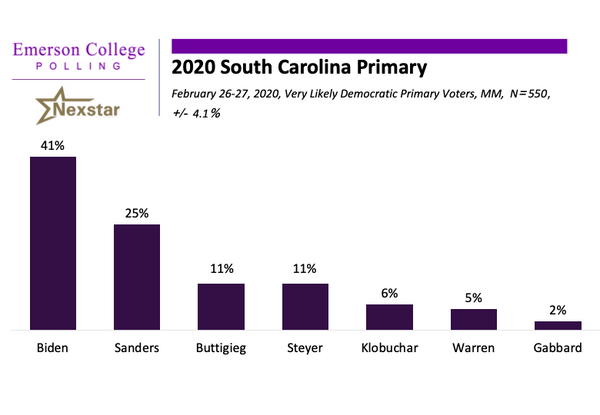 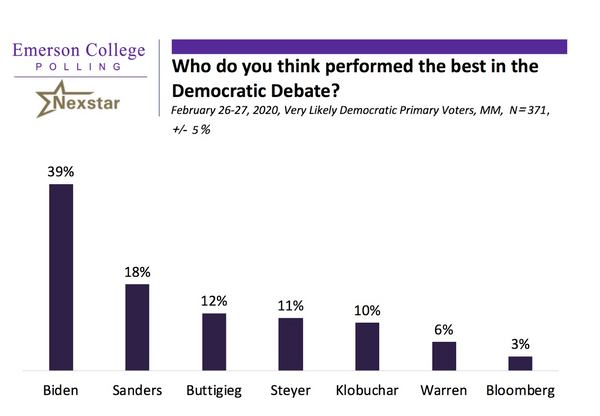