A national Emerson College Poll finds President Joe Biden with a split job approval among registered voters: 47% disapprove and 46% approve of the job he is doing as President. Seven percent (7%) are undecided. Biden’s approval rating has gone down since the last Emerson national poll in February, where his approval was at 49% approve and 39% disapprove, with 12% undecided. 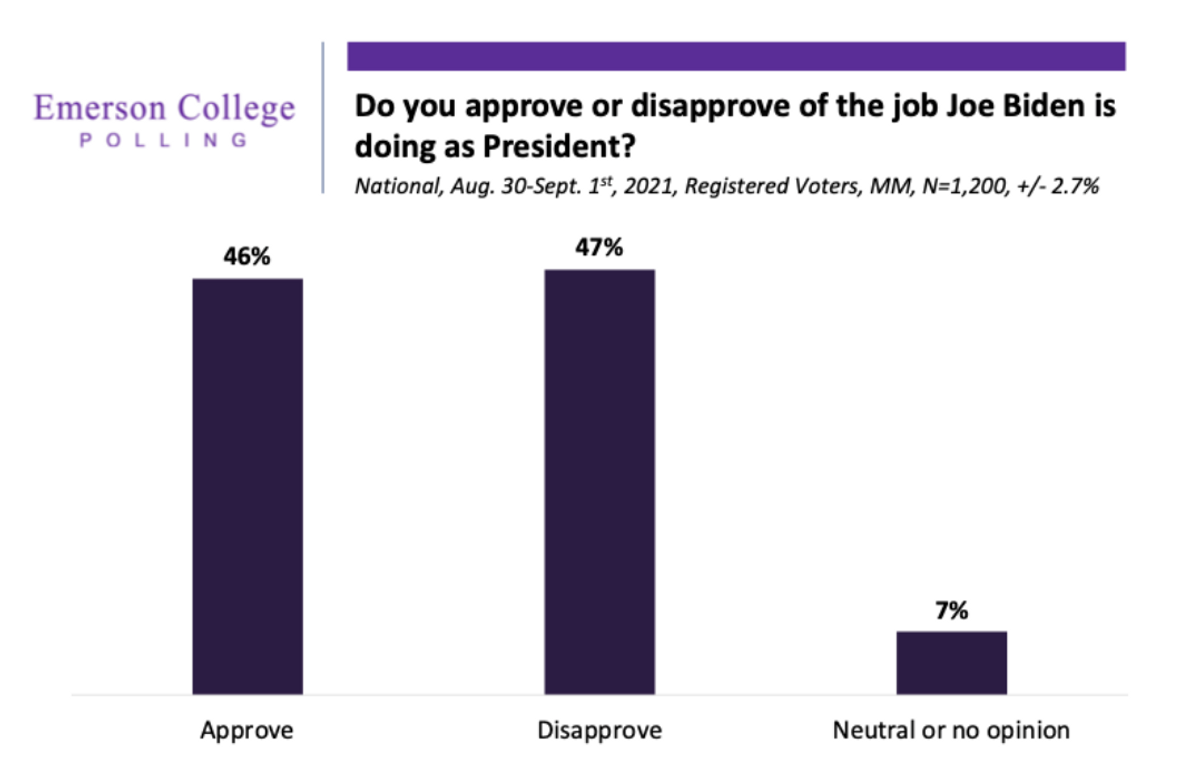 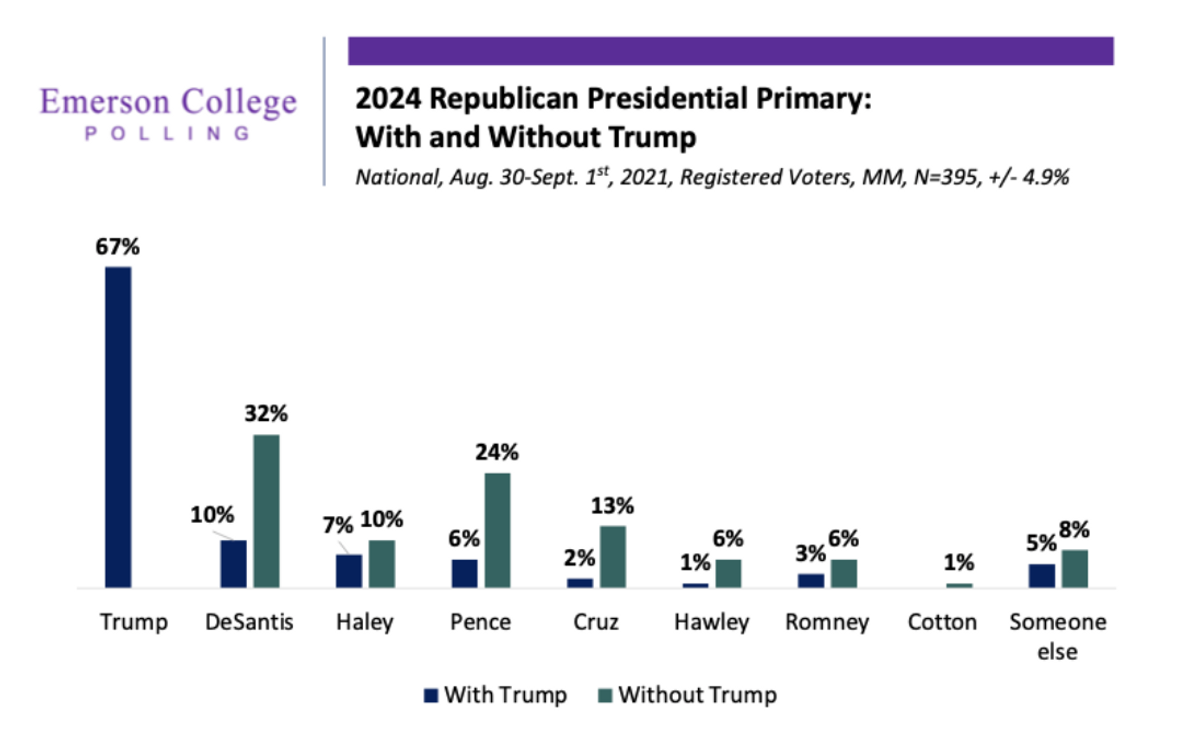 Voters were asked about a series of hypothetical 2024 matchups. If Biden and Trump are the eventual nominees in 2024, Trump is slightly favored with 47%, while Biden is at 46%. Biden is stronger against DeSantis, with a 48% to 36% advantage. However, when Mitt Romney was listed as the potential Republican nominee, the vote splintered, with Biden at 42%, Romney at 23%, and 29% indicating they would vote for someone else. 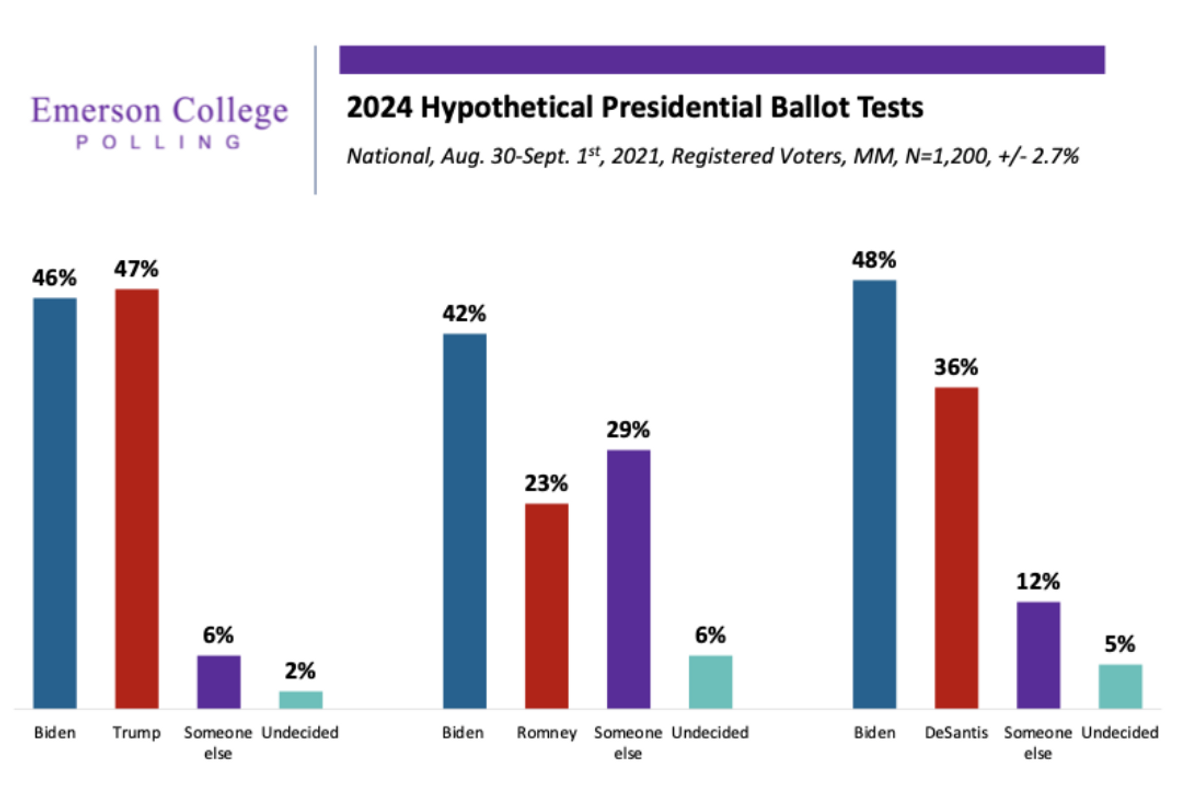 Spencer Kimball, Director of Emerson College Polling, said “Historically, this data reminds me of 1912 when Teddy Roosevelt failed to win the Republican nomination from then President Taft and created a third party dooming the Republican chances against Woodrow Wilson. This data suggests that Republicans want either Trump or a Trumpian candidate to be their nominee, or half of them may split from the party.”

Regarding the upcoming 2022 midterm elections, it appears neither party has an enthusiasm advantage at this point, with 71% of Democrats and 69% of Republicans saying they are very likely to vote in the midterms. 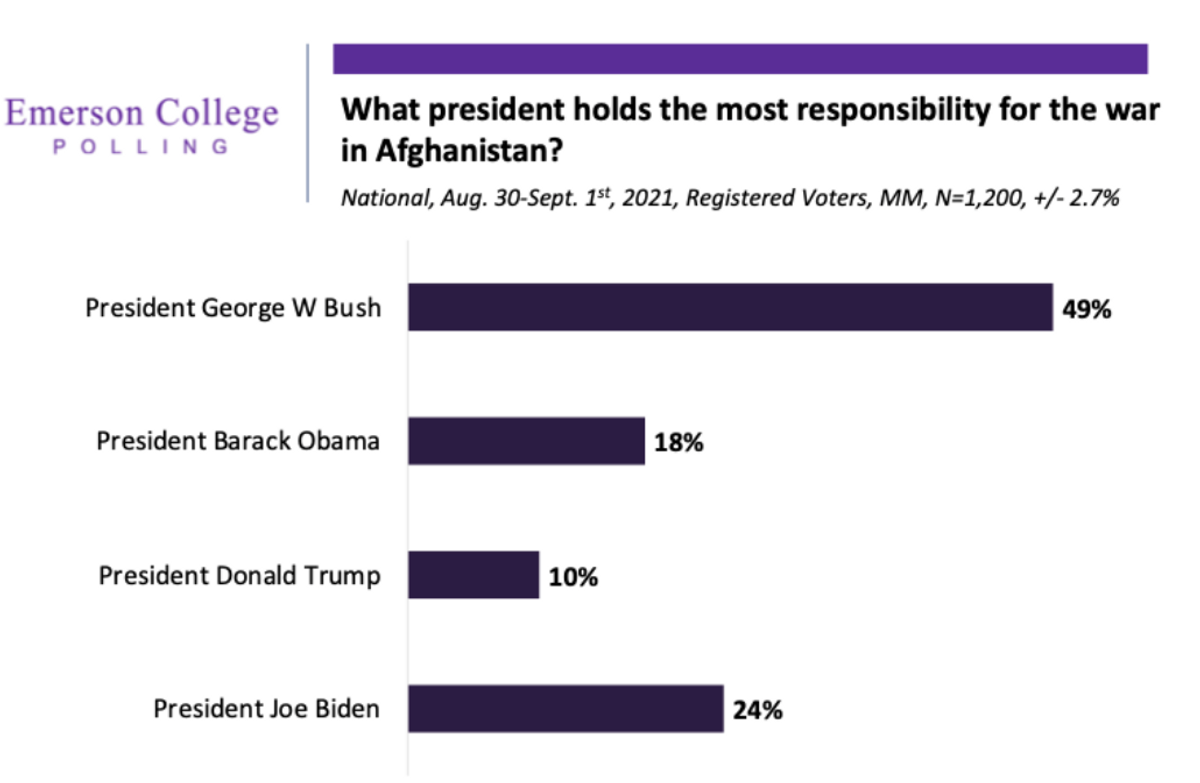 According to Spencer Kimball, Director of Emerson College Polling, “this comparison highlights the complexity of lasting conflicts. For three Presidents (Bush, Obama, and Biden), the voters see these presidents as responsible for the US losing the war, compared to the voters who saw Trump as responsible, who see his actions as why the US won the war.”

Half of voters (50%) think the United States should not recognize the Taliban as the government of Afghanistan, while 21% support this action, and 30% are unsure.

Voters also were asked about vaccine policies. A majority (59%) of voters agree that businesses have the right to require their employees to get vaccinated, while 32% disagree, and 9% are unsure. There is a clear party divide regarding vaccine requirements: 75% of Democrats agree that businesses have this right, also favored by 50% of Independents, and 47% of Republicans.

A near majority, 49%, agree that the US Government should require everyone eligible to receive a Covid-19 vaccine. Thirty-nine percent (39%) disagree and 12% are undecided. Democrats are in favor 66% to 25%, Independents disagree 44% to 41%, and Republicans disagree 50% to 38%. 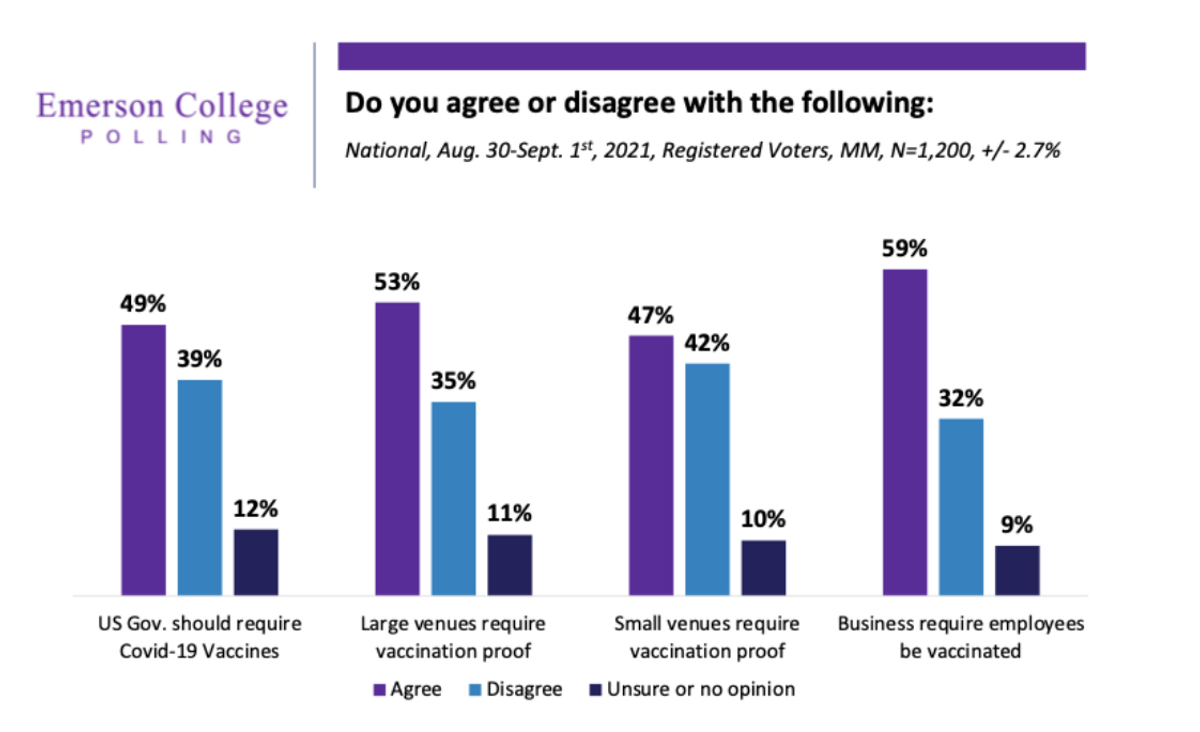 Last week, the California Parole board recommended parole for Sirhan Sirhan, who was convicted of killing Senator Robert Kennedy in 1968. Sixty-percent (60%) of voters disagreed with a release, while 21% agree and 19% are unsure.

The Emerson College national poll was conducted August 30-September 1, 2021. The sample consisted of registered voters in the United States, n=1,200 with a Credibility Interval (CI) similar to a poll’s margin of error (MOE) of +/- 2.7 percentage points. The data sets were weighted by age, education, race, party affiliation, and region based on 2020 turnout modeling. It is important to remember that subsets based on gender, age, party breakdown, ethnicity, and region carry with them higher margins of error, as the sample size is reduced. Data was collected using a cellphone sample of SMS-to-web, an online panel provided by Amazon MTurk, and an Interactive Voice Response (IVR) system of landlines. 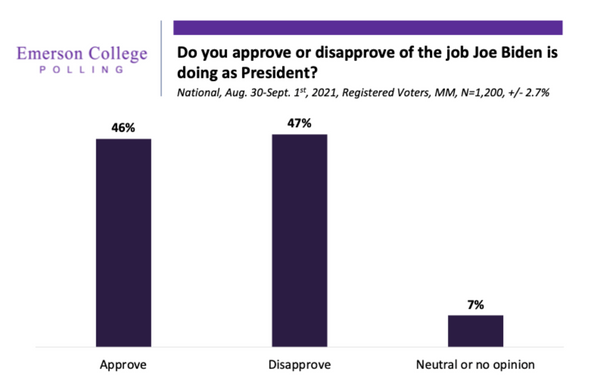 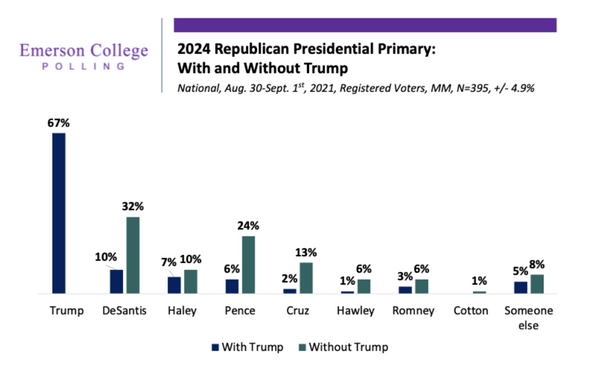 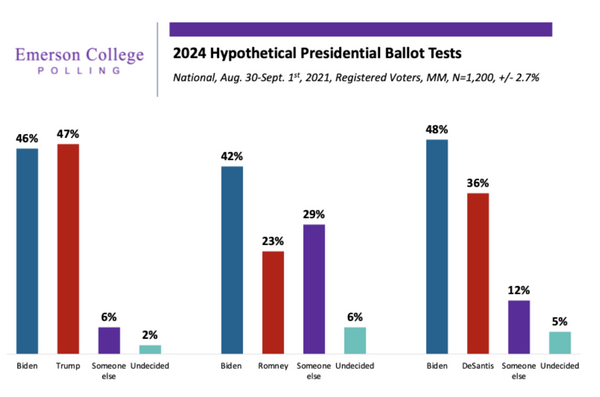 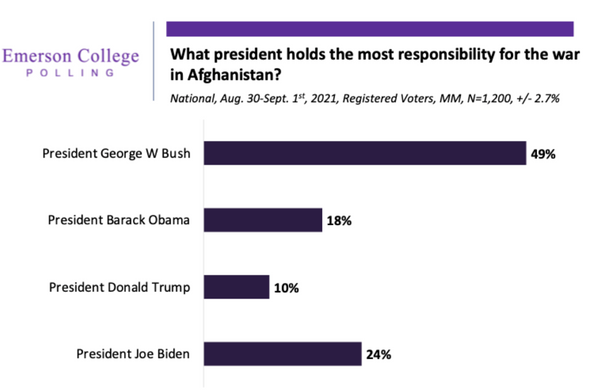 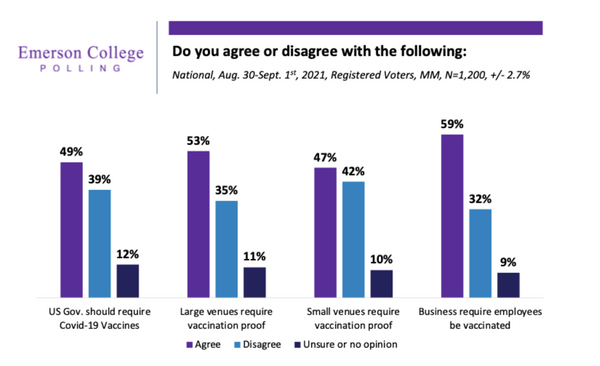