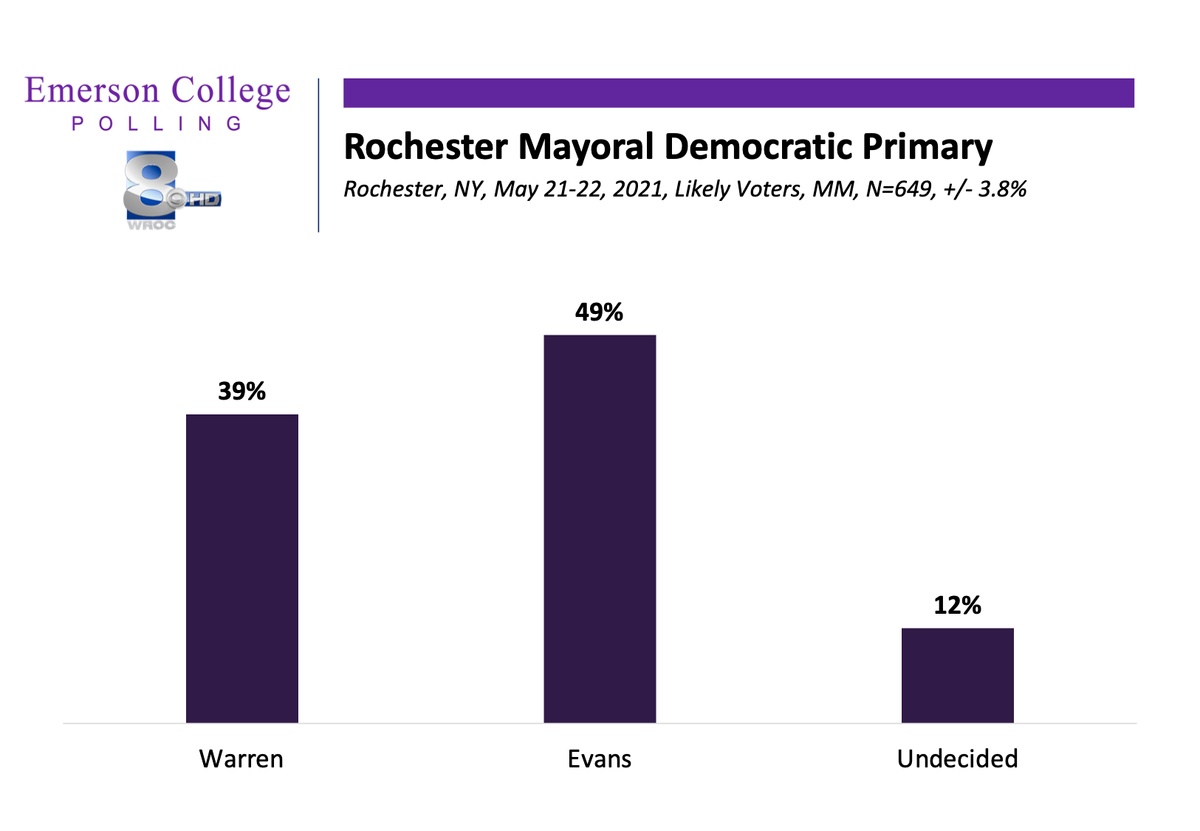 A look inside the numbers reveals that amongst very likely voters, Evans leads only slightly, 46% to 45%, while among those somewhat likely to vote Evans has a larger lead, 59% to 13%.

Evans' base of support is among White voters, where he garners 84% support compared to Warren at 11%. Conversely, Warren’s support is greater within the Hispanic (63%-31% support) and African American/Black (47%-37% supports) voters. Warren leads with those without a college degree 43% to 41% while college-educated voters are breaking for Evans 65% to 31%.

When asked about the recent news of Mayor Warren’s husband’s arrest on drug and weapons charges, 83% of Democratic voters report that they are following the story somewhat or very closely. Only 4% of likely voters have not heard about the issue.

A majority (56%) of Rochester voters disapproved of Mayor Warren’s handling of the Daniel Prude case, while 17% approve and 23% are unsure. Seven percent (7%) had never heard of the case. Among Democratic likely primary voters, 59% disapprove of how Warren handled the case.

Additionally, a majority of voters (71%), consider the campaign finance charges faced by Mayor Warren as either somewhat or very serious, while 21% say the charges are not serious, and 9% were unsure.

When asked what issue the next mayor should prioritize first, voters report being most concerned with jobs at 26%, followed by police reform at 18%, healthcare at 17%, and housing at 15%. Fourteen percent (14%) reported something else, while no other issue fell above 4%.

Regarding potential mayoral control of the Rochester City School District, voters generally opposed the idea, with 46% opposed, 26% in favor, and 28% unsure.

When asked for their general approval of key public officials’ jobs, 70% of voters in Rochester report approving of President Biden’s job while 25% disapprove. Regarding Governor Cuomo, 54% of Rochester voters approve, while 36% disapprove. Current Rochester Mayor Lovely Warren has the lowest approval rating, with 35% approval and 51% disapproval.

The WROC-TV/Emerson College Mayoral poll was conducted May 21-22, 2021. The sample consisted of Rochester, NY registered voters, n=1000, with a Credibility Interval (CI) similar to a poll’s margin of error (MOE) of +/- 3 percentage points. The data sets were weighted by party, age, gender, race and education based on census and voter enrollment records. It is important to remember that subsets based on gender, age, party breakdown, ethnicity, and region carry with them higher margins of error, as the sample size is reduced. Data was collected using an Interactive Voice Response (IVR) system of landlines and a cellphone sample of SMS-to-web. 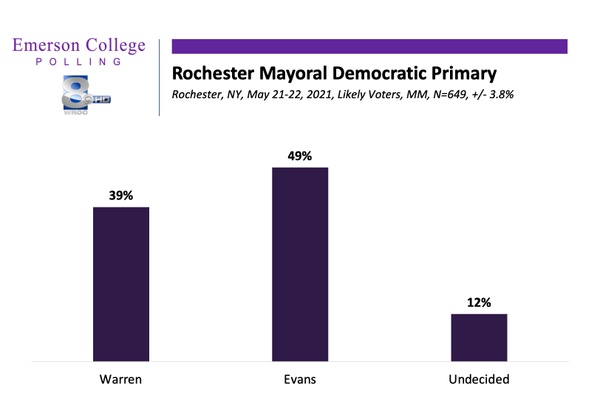