A new poll of Ohio voters finds a very competitive Democratic primary between former Vice President Joe Biden at 29%, Sen. Bernie Sanders at 27% and Sen. Elizabeth Warren at 21%. No other candidate in the race clears 7%. Data collected Sept 29-Oct 2, n=353 +/-5.2%. 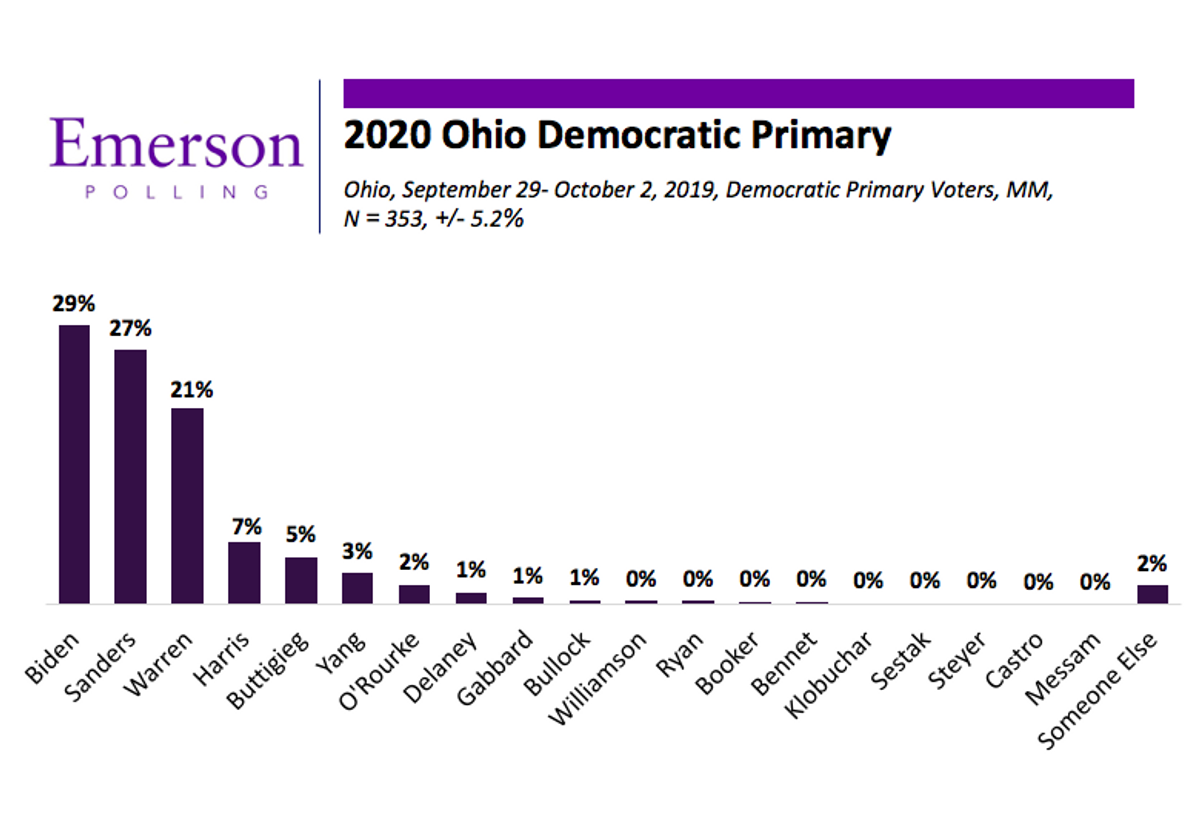 Sanders continues to hold a strong lead with voters under 30 years old. In Ohio, he captures 52% of this vote, but his numbers drop significantly with older voters. Sanders receives just 4% of the vote among those over 65. Biden has the reverse trend - winning 49% of voters over 65, but captures only 3% among 18-29-year-olds. Warren competes as the alternative choice with all age groups, with no significant variance in her totals across each group.

Sanders is holding onto a majority of his 2016 supporters in Ohio, as 57% still support him. 16% of 2016 Sanders supporters now favor Warren, 10% now support Biden and 8% now support Harris. Biden, on the other hand, holds a strong lead among those who supported Hillary Clinton in 2016. He receives 47% support from Clinton primary voters, followed by Warren with 29%, and Buttigieg, Sanders, and Harris with 5%.

President Trump's approval rating is at 43% with a 51% disapproval in the state, similar to his national Real Clear Politics average. Trump struggles with female voters with 54% disapproving, while among men - 48% disapprove and 46% approve of the President.

Trump's approval within the Republican party, however, remains very strong as he receives 87% of the vote in a potential Republican primary against his 3 opponents. (n=325, +/-5.4%)

Governor Mike DeWine is also suffering low approval in the Buckeye State, with a 30% approval and 34% disapproval rating. 36% of voters were undecided.

Nearly 1 in 3 voters (33%) identify the economy as the most important issue for voters in the upcoming presidential election. Health care (19%), social issues (14%) and the environment (9%) rounded out the top 5 issues. Among Democratic primary voters, health care is the most important issue (27%), followed by social issues (21%) and the economy (15%).

Impeachment is ranked 6th out of 9 issues listed with 7% saying it was most important in deciding who they will vote for President. 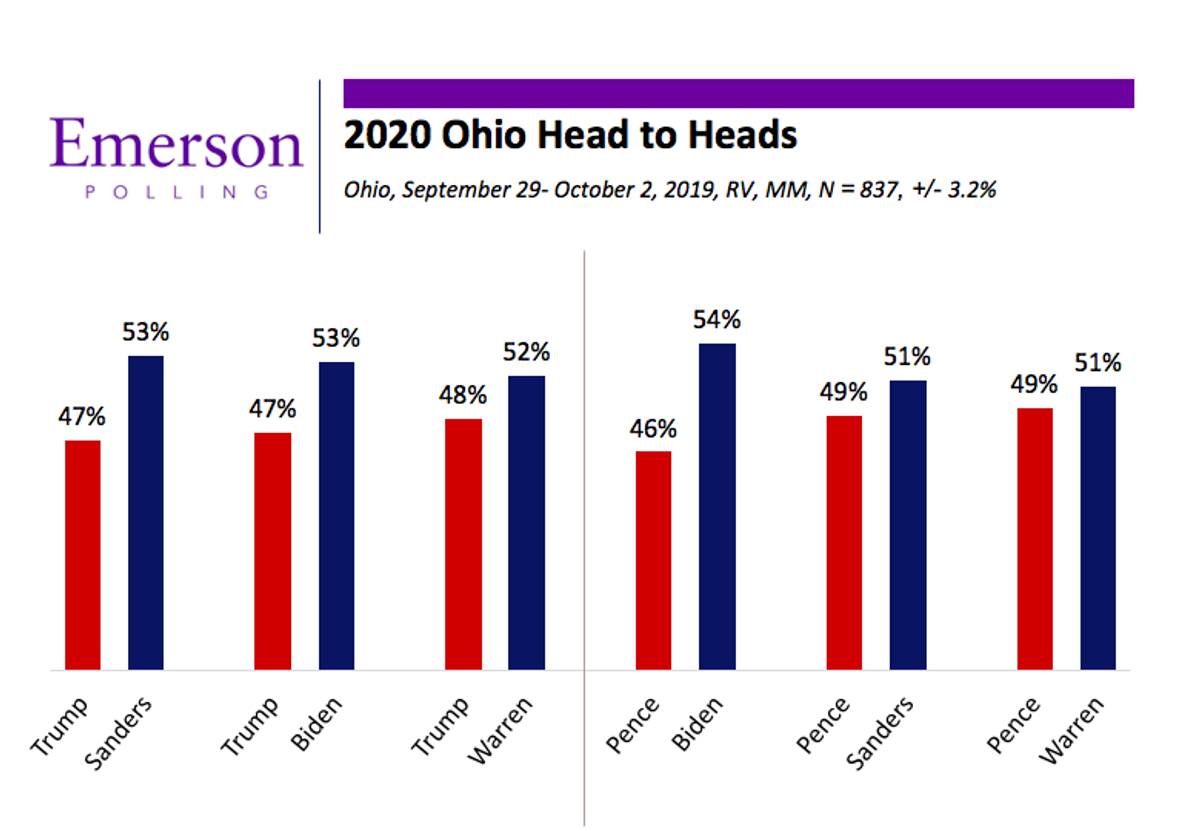 Spencer Kimball, Director of Emerson Polling said: "at this point, it does not appear that the impeachment issue would significantly impact a Trump candidacy as his numbers are comparable with Pence in the head to head matchups.”

Trump struggles with voters earning under $50,000, getting about 41% of this vote against his Democratic rivals. Trump is tied or leads with income groups making over $50,000.

The Ohio Emerson College poll was conducted September 29-Oct 2, 2019 under the Supervision of Emerson Polling Director Assistant Professor Spencer Kimball. The sample consisted of registered voters, n=837, with a Credibility Interval (CI) similar to a poll’s margin of error (MOE) of +/- 3.3 percentage points. The data was weighted by gender, age, education, ethnicity and mode based on 2016 turnout modeling. It is important to remember that subsets based on gender, age, party breakdown, ethnicity and region carry with them higher margins of error, as the sample size is reduced. Data was collected using both an Interactive Voice Response (IVR) system of landlines only (n=552) and an online panel provided by Amazon Turk (n=285). 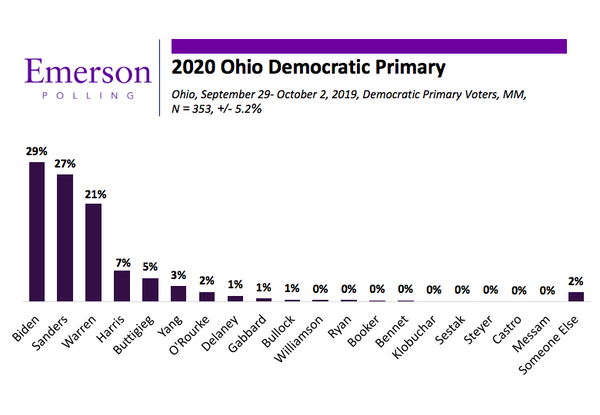 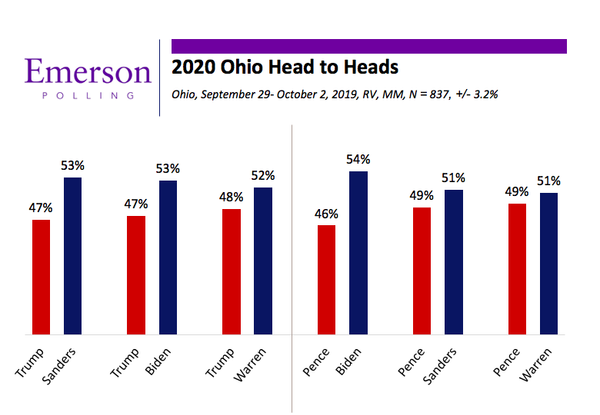