Ohio 2020: Biden with Large Lead Over Sanders in the Buckeye State

The latest Emerson College/Nexstar Poll in Ohio of likely Democratic Primary Voters finds former Vice President Joe Biden with 57%, followed by Senator Bernie Sanders with 35%, and former Rep. Tulsi Gabbard with 1%. Seven percent (7%) plan to vote for someone else or are undecided. 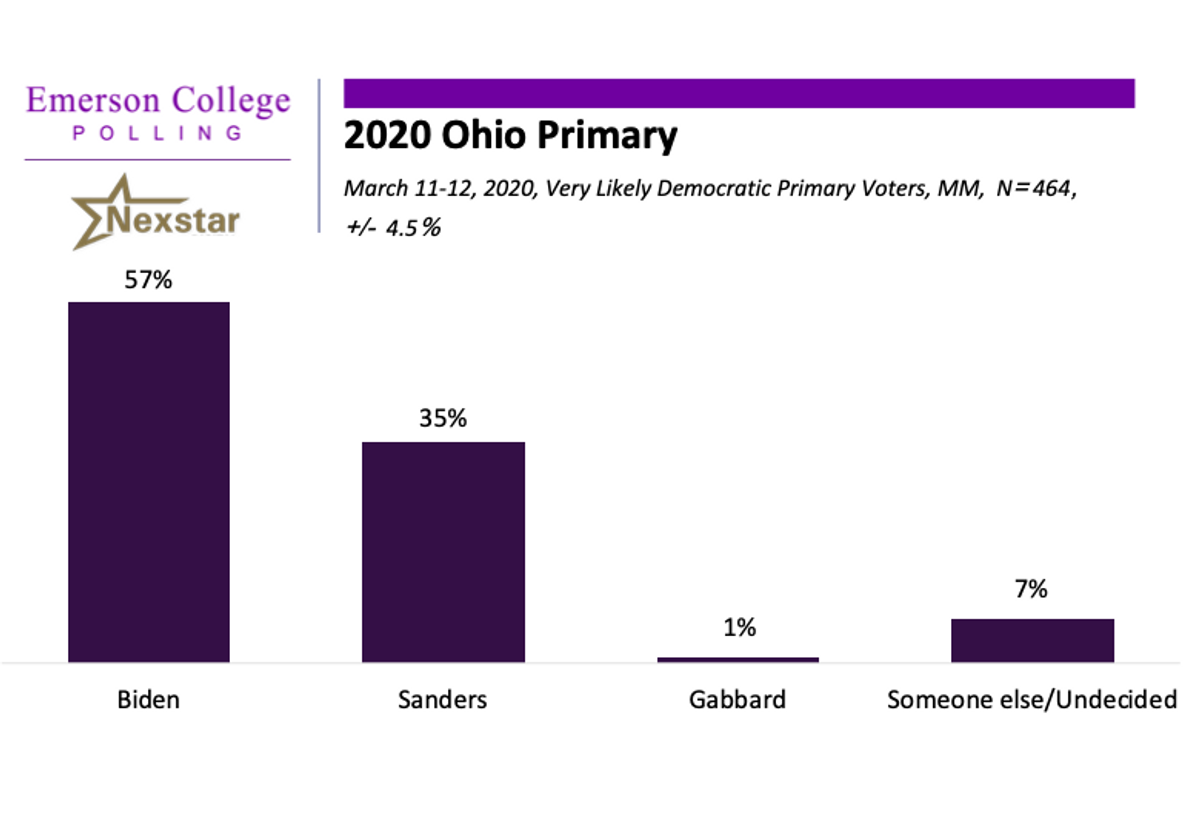 The majority of voters are solidifying their support, 78% say they will definitely vote for the candidate they chose and 22% say there is a chance they could change their mind and vote for someone else.

When it comes to deciding for whom they will vote for President, a plurality of voters, 36%, agree that electing someone who can beat Trump is their top priority. Following that, 21% of voters say health care is their most important issue, and 13% say the economy.

Respondents are concerned about Coronavirus, with the majority, 61%, saying they are very or somewhat concerned. Only 5% of voters said they are not at all concerned, while 17% said they were somewhat unconcerned and 17% were unsure.

Only a small percentage of voters, 10%, say that they believe Coronavirus is not a serious public health threat to the country. On the other hand, 47% said they believe it to be a serious threat, and 43% said it is one of the many health threats to the nation.

When asked their opinion on a ban of the sale of assault weapons, a majority, 61%, were supportive. Followed by 24% in opposition and 15% undecided.

The majority of Ohio Democratic Primary voters think that Joe Biden has the best plan to create jobs in Ohio (54%), followed by 32% who think Bernie Sanders has the best plan, and 15% said Donald Trump.

The majority of respondents (53%) said Bernie Sanders has the best healthcare policy, and 47% said Joe Biden. 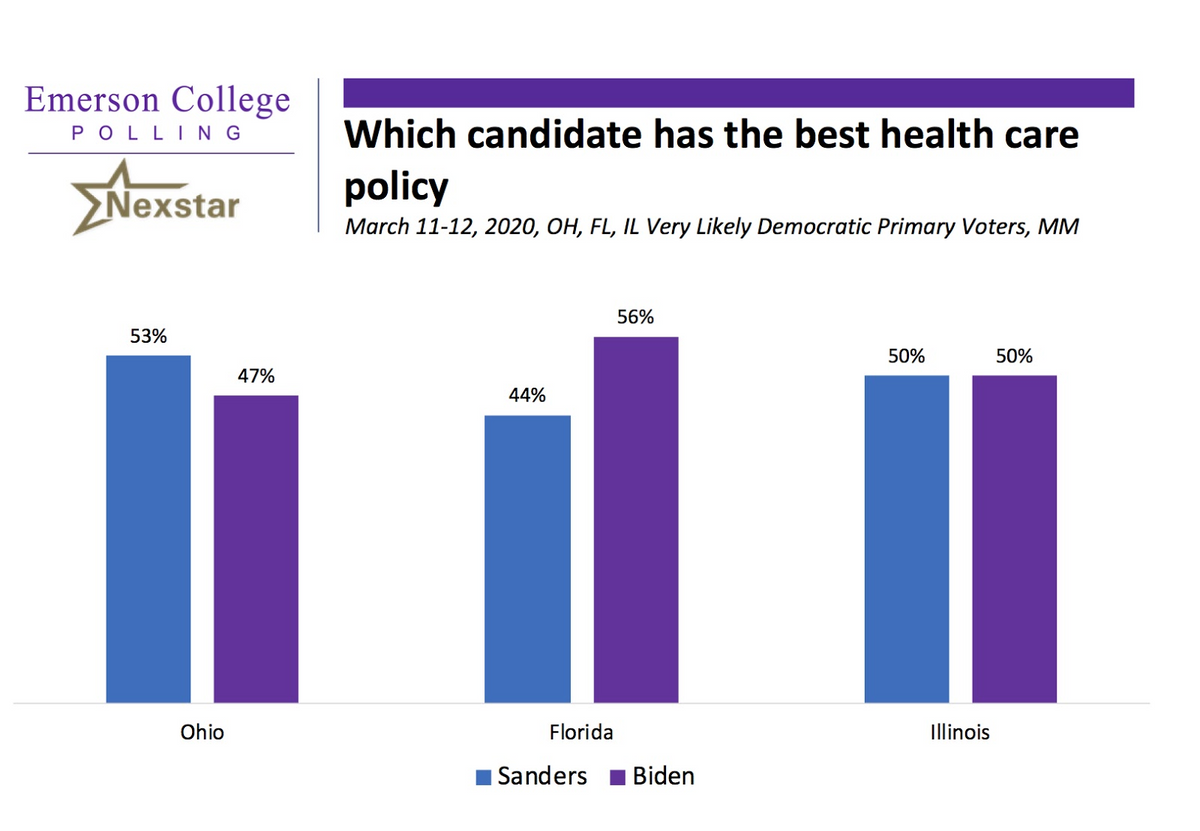 Sixty-eight percent of Ohio Democratic Primary voters support legalizing marijuana for adults 21 and older, 20% oppose, and 12% are undecided on legalization.

The Ohio Emerson College/Nexstar poll was conducted March 11-12, 2020. The sample for the Democratic Primary consisted of registered Democratic, Republican, and Independent very likely voters, n=464, with a Credibility Interval (CI) similar to a poll’s margin of error (MOE) of +/- 4.5 percentage points. The data sets were weighted by gender, age, ethnicity, education, and region. It is important to remember that subsets based on gender, age, party breakdown, ethnicity, and region carry with them higher margins of error, as the sample size is reduced. Data was collected using an Interactive Voice Response (IVR) system of landlines (n=223) and an online panel provided by MTurk (n=241). 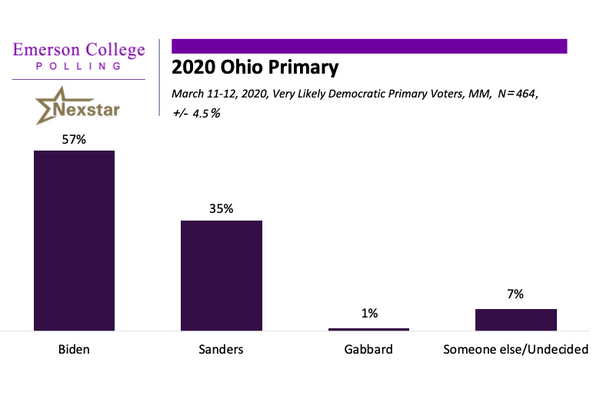 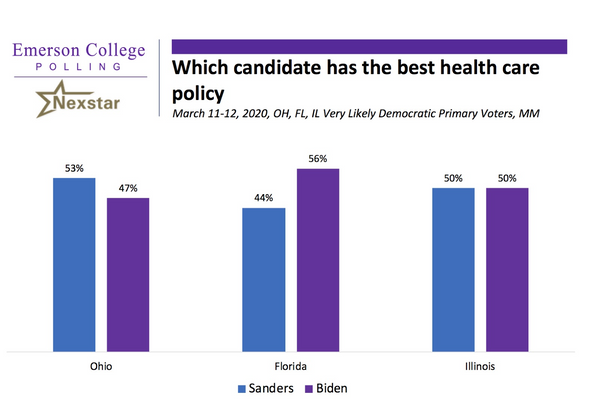