NYC 2021: Adams Poised to be Next Mayor of NYC, Leading Sliwa by 40 Points

The Emerson College/PIX11/NewsNation poll of the New York City mayoral race finds Democrat Eric Adams leading Republican Curtis Sliwa 61% to 25% among likely voters. Fourteen percent (14%) are undecided. When the undecided voters are allocated towards the candidate they said they are leaning towards, Adams expands his lead to forty points, 70% to 30%. 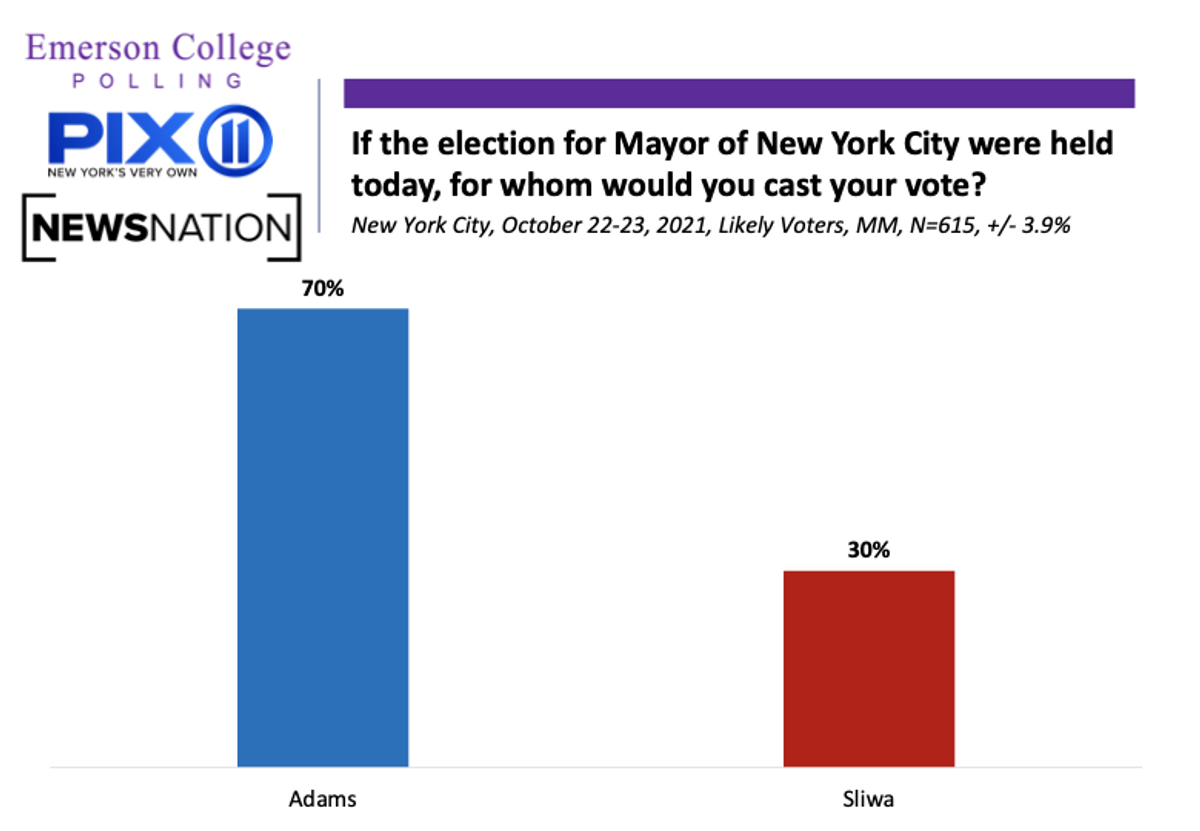 ﻿Majorities of all age categories and racial groups are breaking towards Adams. Sliwa is leading in Staten Island, 61% to 28%, while Adams leads in all other boroughs.

When asked how safe they feel riding the NYC subway system, a plurality (43%) of voters said they feel very or somewhat safe, while 34% feel not that safe or not safe at all. Twenty-four (24%) reported that they do not ride the NYC subway system. Twenty percent (20%) of females report feeling not at all safe compared to 10% of males.

The majority (54%) of New York City voters think, if a COVID-19 vaccine is approved for children 5-11, there should be vaccine mandates in K-12 schools. Thirty-one percent (31%) think there should not be mandates and 16% were unsure or have no opinion.

A majority (70%) of voters think the COVID-19 vaccine has been distributed fairly in New York City, while 15% think it has not and 15% were unsure. Additionally, 73% said they feel safer going to a restaurant if all staff are vaccinated, compared to 15% who said they do not feel safer, and 12% who are unsure or have no opinion.

Voters are split on whether or not the city has an obligation to provide additional debt relief to taxi medallion owners; 32% say yes, 33% say no, and 35% are unsure or have no opinion.

A plurality (42%) of voters said that Rikers Island should not be closed and replaced with community jails, while 38% said it should, and 20% are unsure or have no opinion.

The New York City Emerson College/PIX 11/NewsNation poll was conducted October 22-23, 2021. The sample consisted of New York City likely voters, n=615, with a Credibility Interval (CI) similar to a poll’s margin of error (MOE) of +/- 3.9 percentage points. The data sets were weighted by gender, age, education, race, and region based on turnout modeling using L2. It is important to remember that subsets based on gender, age, party breakdown, ethnicity, and region carry with them higher margins of error, as the sample size is reduced. Data was collected via a cellphone sample using SMS-to-web, a landline sample using IVR, and an online panel provided by Amazon MTurk. 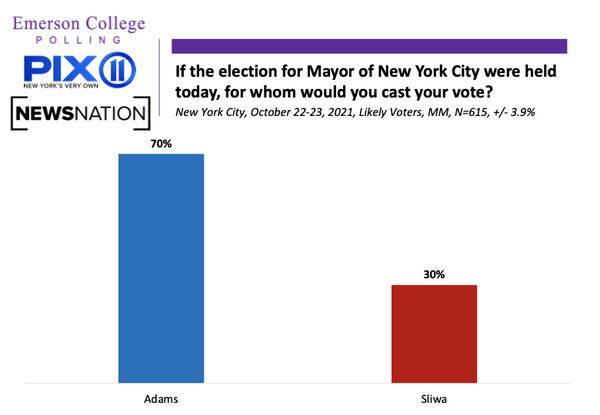 NYC Full Results
Download
Related Bios
https://cdn.filestackcontent.com/wUtByJnESd6l7h7oQ8Zw?dl=true
https://cdn.filestackcontent.com/AG3wH2AR3SP2Mo58NZitaz/rotate=exif:true/resize=width:600/wUtByJnESd6l7h7oQ8Zw
Professor Kimball teaches Political and Sports Communication courses in both the undergraduate and graduate programs at Emerson College. He is the director of Emerson Polling and the advisor for the Emerson Pre-Law Society and the Emerson College Polling Society. Kimball is a national pundit quoted in a variety of publications including the Wall Street Journal, Boston Globe, Huffington Post, Washington Post, Fox News, the National Journal, and National Public Radio (NPR).