A new Emerson poll finds President Trump’s approval has increased in the last month with 48% approval and 47% disapproval, a bounce from 43% approval in the last Emerson National poll in October. Support for impeachment has flipped since October from 48% support with 44% opposing to now 45% opposed and 43% in support. The biggest swing is among Independents, who oppose impeachment now 49% to 34%, which is a reversal from October where they supported impeachment 48% to 39%.

The president’s support in the Republican primary increased this month to 93% against primary challengers Bill Weld and Joe Walsh. Trump's head to head matchups in the General Election against the top Democratic candidates have also tightened since October, now trailing Sanders by 1 point and leading his other three potential opponents. 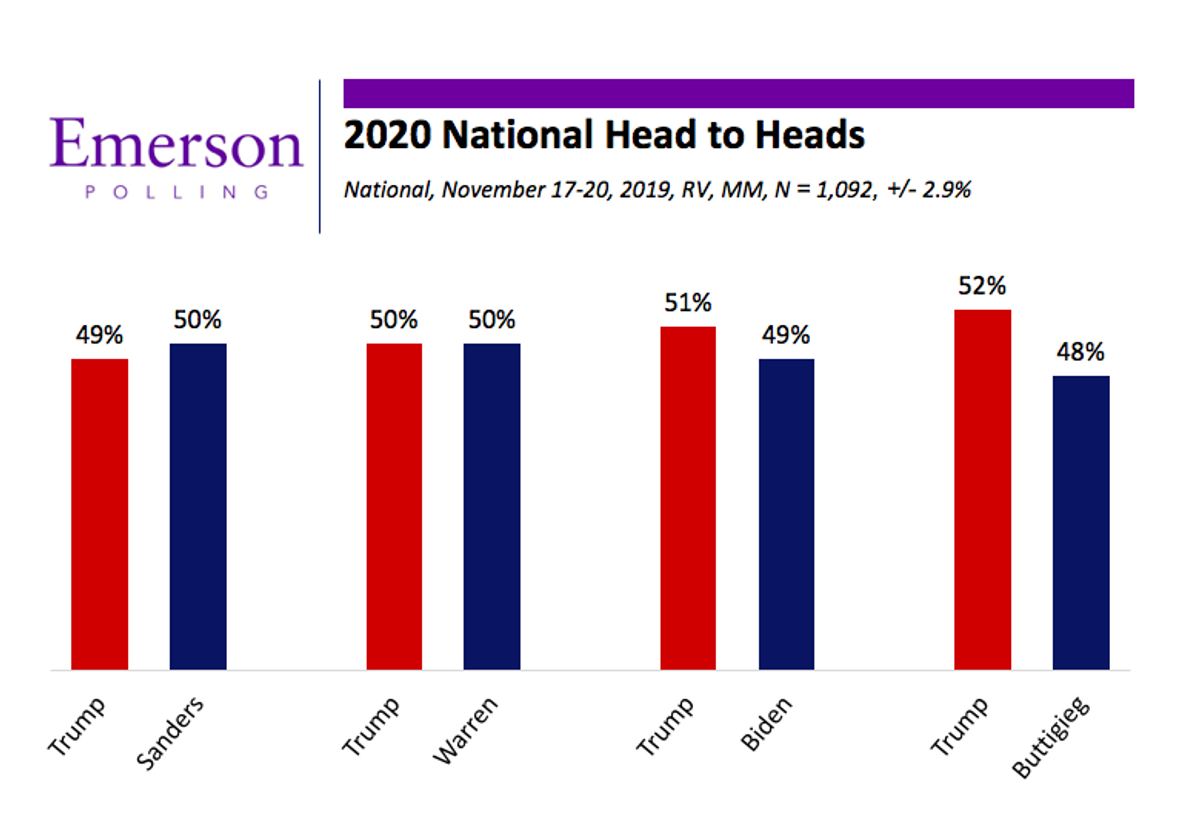 The economy is the number one issue for Republicans (50%) and Independents (35%), while for Democrats, healthcare ranked highest at 25%. Overall, the economy continues to be the most important issue for one in three voters (34%) in deciding who they will vote for President. Healthcare is the second most important overall at 18%, followed by immigration and social issues at 10% each. The environment and impeachment were next at 7% apiece, with foreign policy being the least important issue for voters at 3%.

Senator Bernie Sanders is gaining momentum in the race for the Democratic nomination, increasing 2 points from October to at 27%. Former Vice President Joe Biden is also at 27%, holding steady from October. Senator Elizabeth Warren is in third place at 20%, down a point. Mayor Pete Buttigieg is at 7% and Andrew Yang rounds out the top 5 at 4%. All other candidates are below 4%. (MM, n= 468, +/- 4.6%) 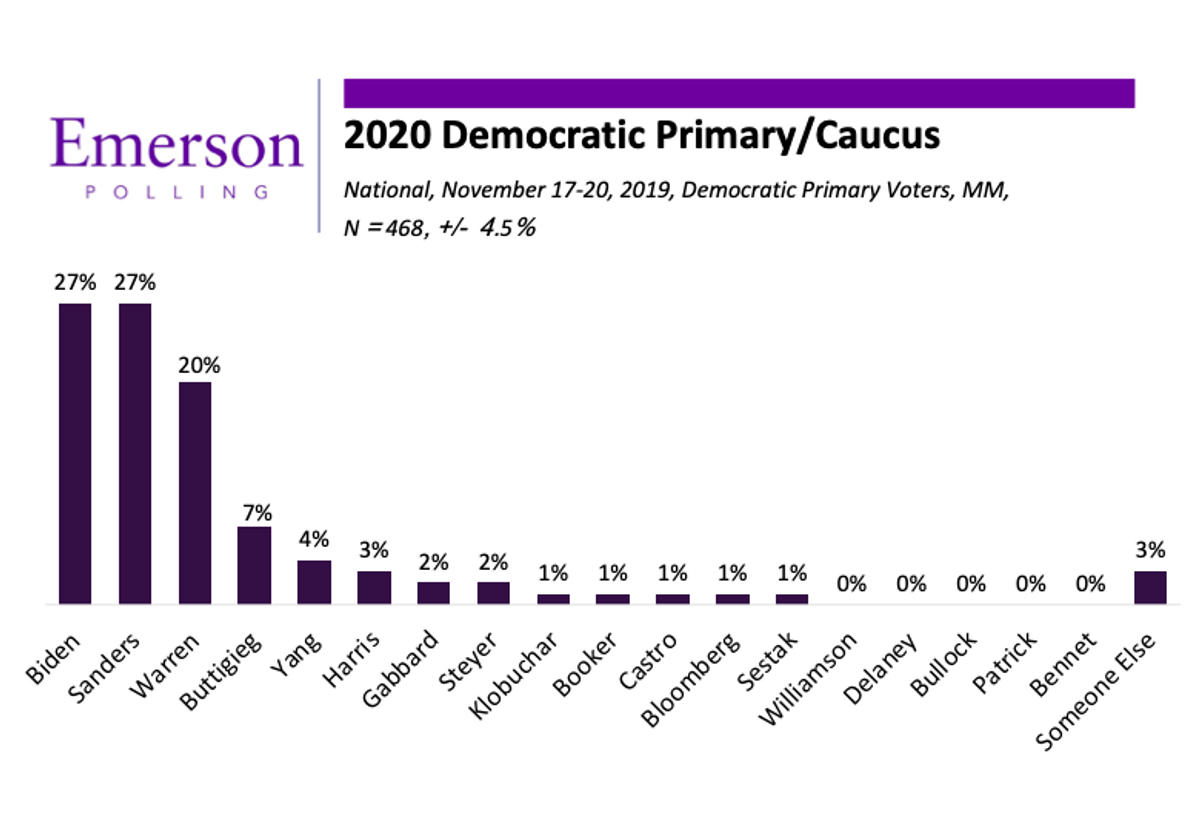 Spencer Kimball, Director of Emerson Polling says that “Biden and Sanders continue to hold their bases, which should concern Warren, as she has waited for one of the front runners to slip these past few months - yet, their support seems to be crystalizing.”

Two new candidates who entered the Democratic race since October have had little impact; Michael Bloomberg and Deval Patrick each take less than 1 percent of the vote. When asked if Bloomberg should enter the Democratic Primary, only 16% of Democratic primary voters think Bloomberg should. Asked the same question about 2016 nominee and former Secretary Hillary Clinton, 24% support Clinton running again.

Kimball thinks “the only angle and hope candidates like Bloomberg or Patrick have for the nomination - is a brokered convention, and while unlikely, the elimination of Super Delegates in 2020 makes it more possible though it hasn’t happened since 1952 for either party.”

Sixty-one percent (61%) of voters are watching or following the political protests in Hong Kong. A significant majority at 59% think Hong Kong should be independent from China, 7% said they should not be, and 34% were unsure. Asians as an ethnic group were the most in support of independence at 78% as compared with Hispanics, Whites and African Americans.

The National Emerson College poll was conducted November 17-20, 2019 under the Supervision of Assistant Professor Spencer Kimball. The sample consisted of registered voters, n=1,092, with a Credibility Interval (CI) similar to a poll’s margin of error (MOE) of +/- 2.9 percentage points. The data was weighted based on 2016 voter model of age, mode, party registration, ethnicity, and region. It is important to remember that subsets based on gender, age, party breakdown, ethnicity and region carry with them higher margins of error, as the sample size is reduced. Data was collected using both an Interactive Voice Response (IVR) system of landlines only (n=713) and an online panel provided by Amazon Turk (n=379). 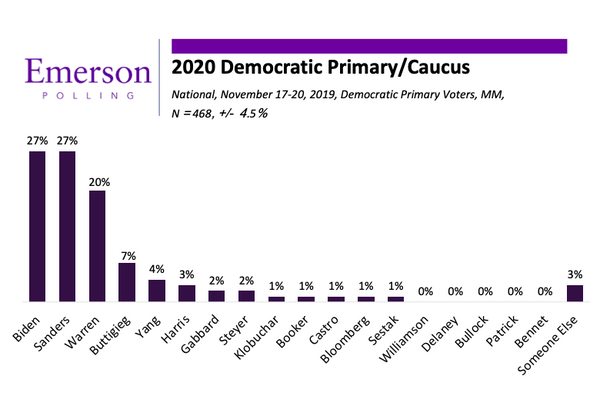 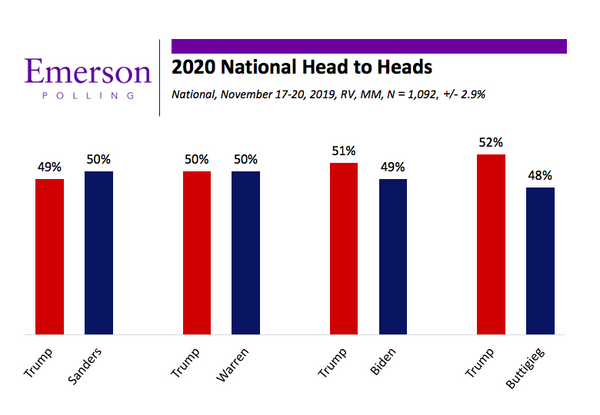