New Mexico 2020: Democrats Strong in the Land of Enchantment, but Split Between Sanders and Biden for Nomination

As New Mexico celebrates its 108th anniversary of statehood, a new Emerson College Poll finds New Mexico Democratic primary voters split between Senator Bernie Sanders at 28% and former V.P. Joe Biden at 27%. Entrepreneur Andrew Yang is the only other candidate in double figures at 10%. Senator Elizabeth Warren follows at 8%, and former Mayor Pete Buttigieg is at 7%. The data was collected January 3-6, 2020, n=447 +/- 4.6%. 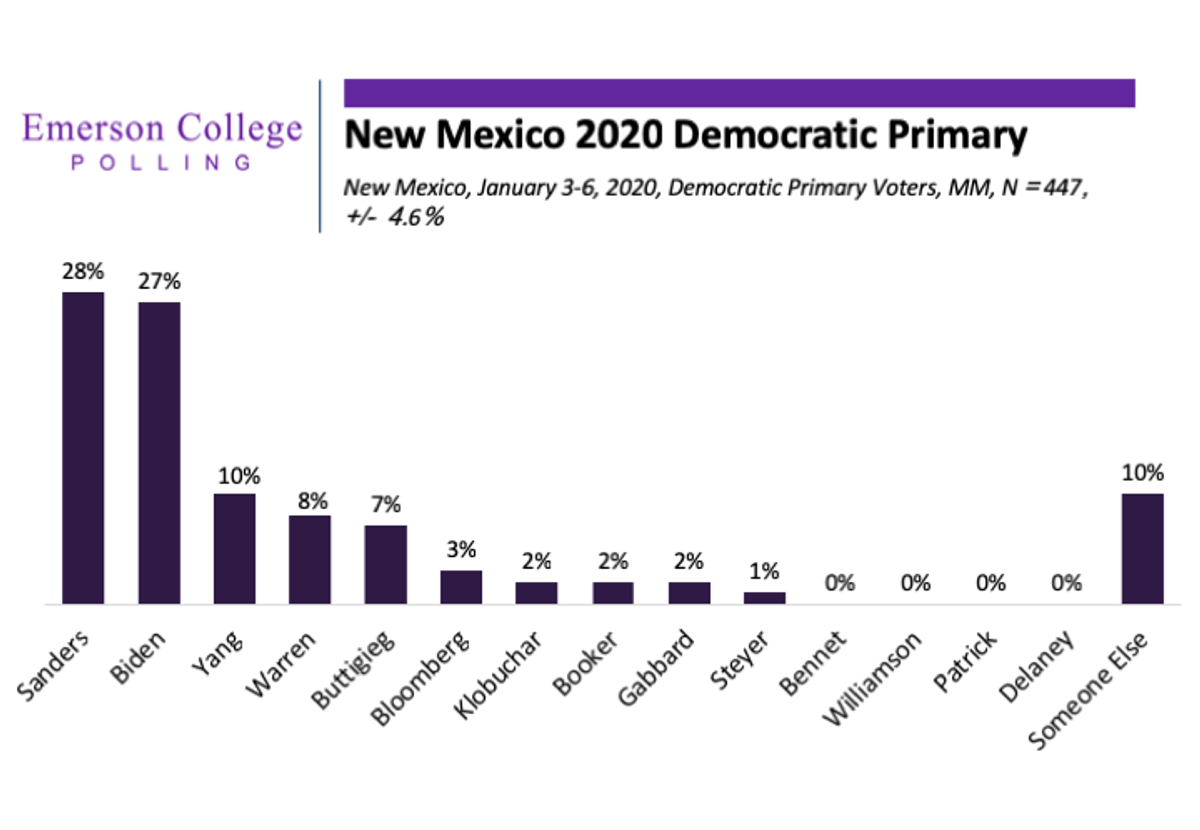 Spencer Kimball, Director of Emerson College Polling explains: “as the country focuses on the early nominating contests, we looked at the end of the nomination schedule to the June 2nd New Mexico Primary to see how things might play out if the race is still contested at that point. It appears if Sanders and Biden are able to emerge as the top two candidates, they are set up for a close showdown in New Mexico - but the race is still fluid as a majority of voters, 52%, say they could change their mind.”

Looking at educational attainment, 46% of those without a high school degree support Sanders, while only 13% of with a postgraduate degree support him. Regionally, Biden takes 34% of the vote from the 2nd and 3rd congressional districts, in comparison to the first district, where it looks like Sanders's popularity is concentrated as he takes 38% of the vote there.

President Trump has a 39% approval and 54% disapproval rating among New Mexico voters, but he continues to remain popular with Republican primary voters with 87% of the vote against two potential GOP rivals.

However, in potential general election head to head match-ups, the land of enchantment does not appear to be enchanted with the President, as he trails all four potential Democratic rivals by significant amounts. Sanders leads Trump by 18 points, while Buttigieg leads Trump by 10, and Warren and Biden each lead the President by 8 points. 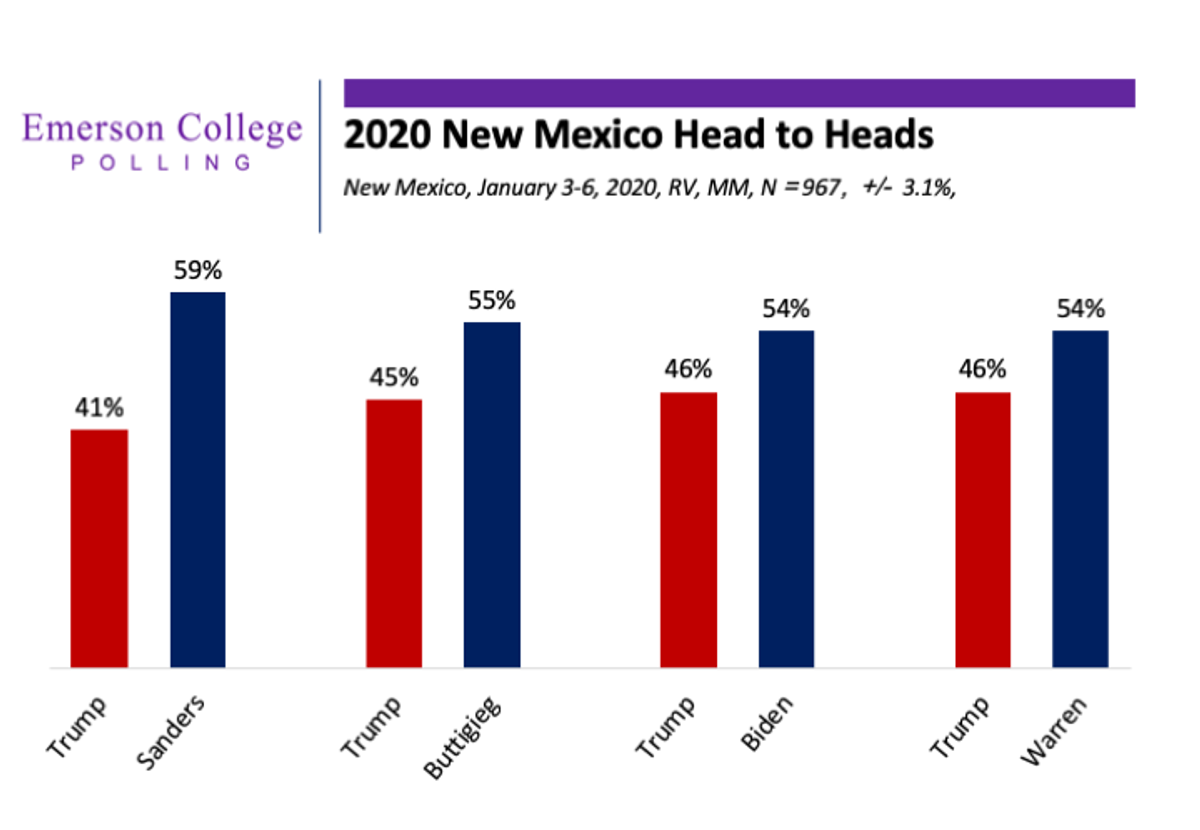 The most important issue for voters is the economy at 34%, followed by healthcare 17% and social issues at 16%; no other issue garnered more than 8%.

Governor Michelle Lujan Grisham has mixed reviews after her first year in office with a 38% approval and 38% disapproval.

The New Mexico Emerson College poll was conducted January 3-6, 2020 under the Supervision of Assistant Professor Spencer Kimball. The sample consisted of registered voters, n=967, with a Credibility Interval (CI) similar to a poll’s margin of error (MOE) of +/- 3.1 percentage points. The data was weighted based on 2016 voter model of party affiliation, age, race, education, ethnicity, and region. It is important to remember that subsets based on gender, age, party breakdown, ethnicity and region carry with them higher margins of error, as the sample size is reduced. Data was collected using both an Interactive Voice Response (IVR) system of landlines only (n= 601) and an online panel provided by Dynata and MTurk (n= 367). 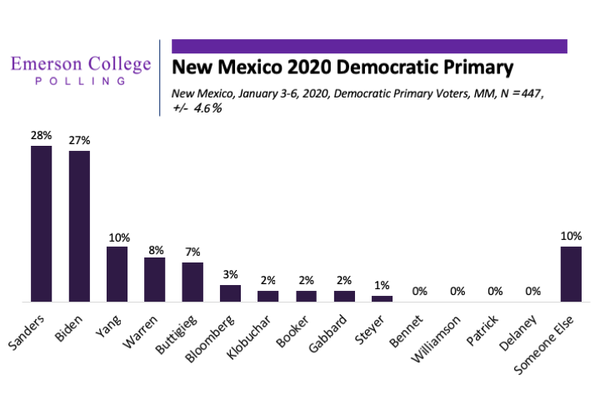 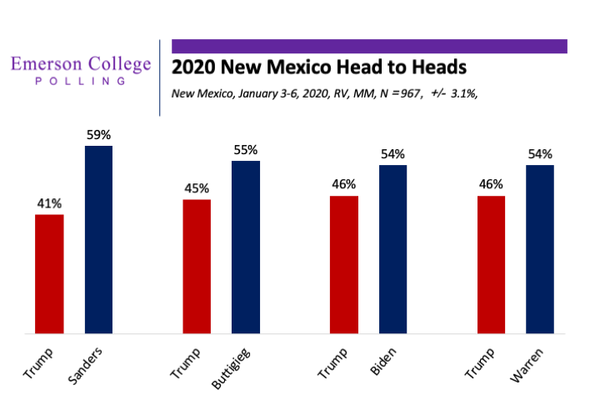