Nearly half (49%) of New York City residents believe we should wait until after June 1st to reopen all non-essential businesses, while 19% said openings should take place between May 16-31. These findings are part of the sixth weekly city and statewide tracking survey from the CUNY Graduate School of Public Health & Health Policy (CUNY SPH), conducted April 17-19. 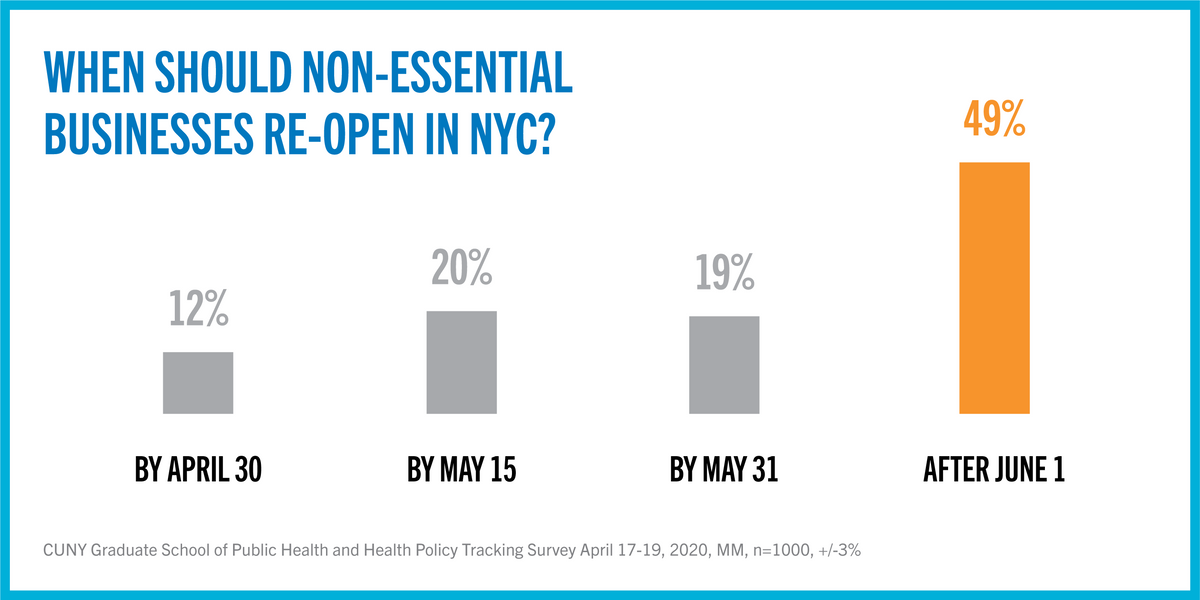 Three in five (60%) New Yorkers say the epidemic has made them feel more connected to fellow New Yorkers, and a similar number (61%) reported a feeling of solidarity with all Americans nationwide.

"The New Yorkers we surveyed have been badly buffeted by the coronavirus. This experience appears to have made them more cautious than some in other parts of our country," said CUNY SPH Dean Ayman El-Mohandes. "Nonetheless, New Yorkers feel a strong sense of solidarity with all Americans."

Consistent with their concerns about re-opening the economy, almost two thirds (66%) of employed New Yorkers expressed concern about returning to their jobs. Over a quarter of workers (28%) want COVID-19 tests taken before returning to work, another 27% said they would not return to work because of fear of getting sick or getting a family member sick. Respondents cited childcare as an important barrier to returning to work: 11% reported they will need to stay home to care for a child when business resumes. Overall, about a fourth (24%) report having a student in grades K-12 at home now, and a majority (51%) said there would be no parent in the household when non-essential businesses re-open.

Household job loss has continued to rise, from 29% in week two to 37% in week six, accompanied by a substantial shift in ethnic distribution. Between weeks two and six, household job loss among African Americans doubled (17% to 35%). Among Asian Americans there was also a marked increase (25% to 40%), and for whites, there was an increase from 24% to 32%. The hardest-hit group, Latinx/Hispanics, stayed relatively steady, increasing from 42% to 44%. 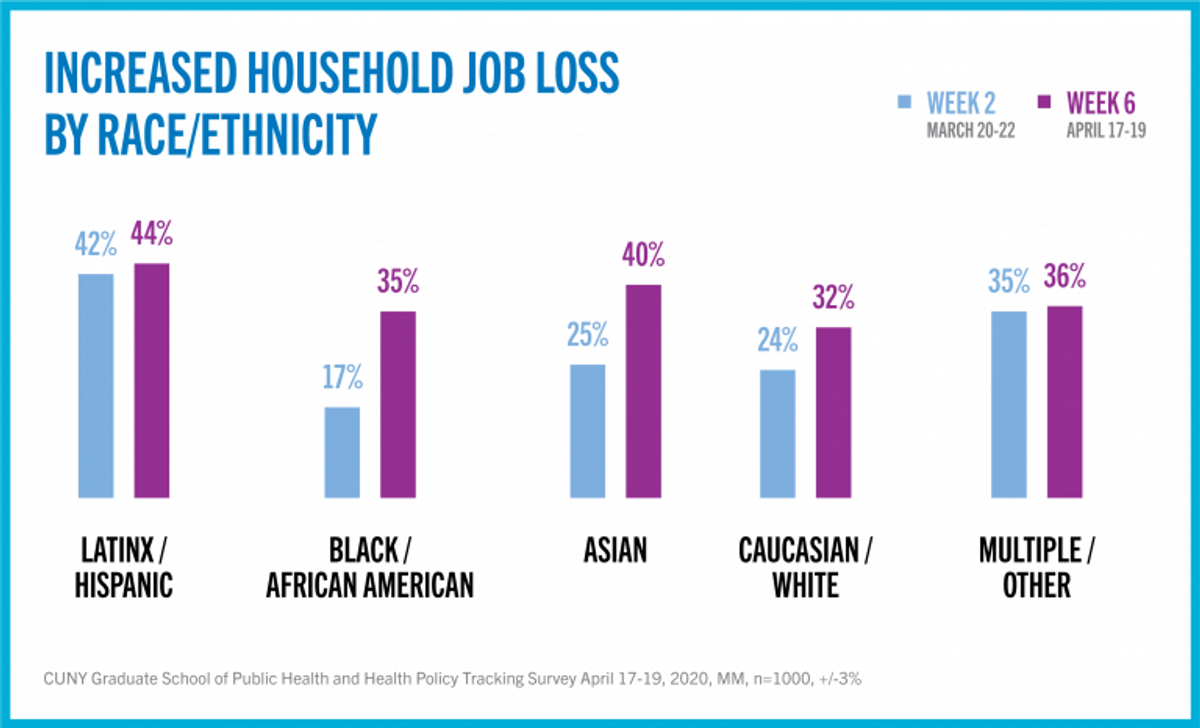 Respondents' perception of their risk of getting sick with the virus has plateaued over the last three weeks, with just more than half (53%) believing that they have a high chance of becoming ill.

Notably, people who reported living in larger households (five or more persons) reported significantly higher numbers of people at home with symptoms associated with the viral infection at 34%, compared to 13% with households of three or four people and 8% of households with one or two people.

New Yorkers continue to exhibit high risk for mental health challenges, with 40% of residents reporting feeling anxious and 32% feeling depressed more than half the time in the past two weeks. Reports of social isolation are unchanged from weeks three and four, with 43% reporting not feeling socially connected at all. Women are more likely than men to report anxiety (45% vs 34%) while levels of depression are similar across gender.

Causing the most distress for New York residents were fears about family and loved ones getting sick or dying (44%). Seventeen percent (17%) are most anxious about their own health, followed by feeling unsafe (13%), remaining isolated from others (12%), losing their job (9%), and not having enough food (4%).

At week six, Asians report the highest rates of hopelessness (75% vs. 49% to 66% among other groups) and depression risk (42% vs 30-32%), although they report the lowest rates of anxiety symptoms (34% vs 40- 41%). For Asian Americans feeling unsafe is the most stressful factor contributing to their mental health symptoms, while all other groups report that the fear of loved ones getting sick is the top stressor. Like Latinx/Hispanics (65%), Asians report higher perceived risk of getting sick with COVID-19 (62%) compared with 42% for African Americans and 48% for whites.

Fifty-five percent (55%) of New Yorkers reported consuming alcohol while 26% report using marijuana. For New Yorkers who drink, nearly half report that their drinking remains the same (43%), 31% report less than usual, and 25% report more. A similar pattern was found for marijuana use, with 43% using about the same amount, but a higher percentage using more than usual (31%), and 26% using less than usual. Men are more likely to report an increase in drinking (62% vs 47%) and marijuana use (33% vs. 20%) compared with women.

"We are seeing persistent elevated mental health challenges and an increase in depression risk for Asian Americans, suggesting changing social, economic patterns across ethnicities as the pandemic unfolds," said Dr. Victoria Ngo, Associate Professor of Community Health and Social Sciences and Director of the Center for Innovation in Mental Health at CUNY SPH.

The complete survey results and related commentary can be found at https://sph.cuny.edu/research/covid-19-tracking-survey/week-6 and JHC Impact, an initiative of the Journal of Health Communication: International Perspectives. 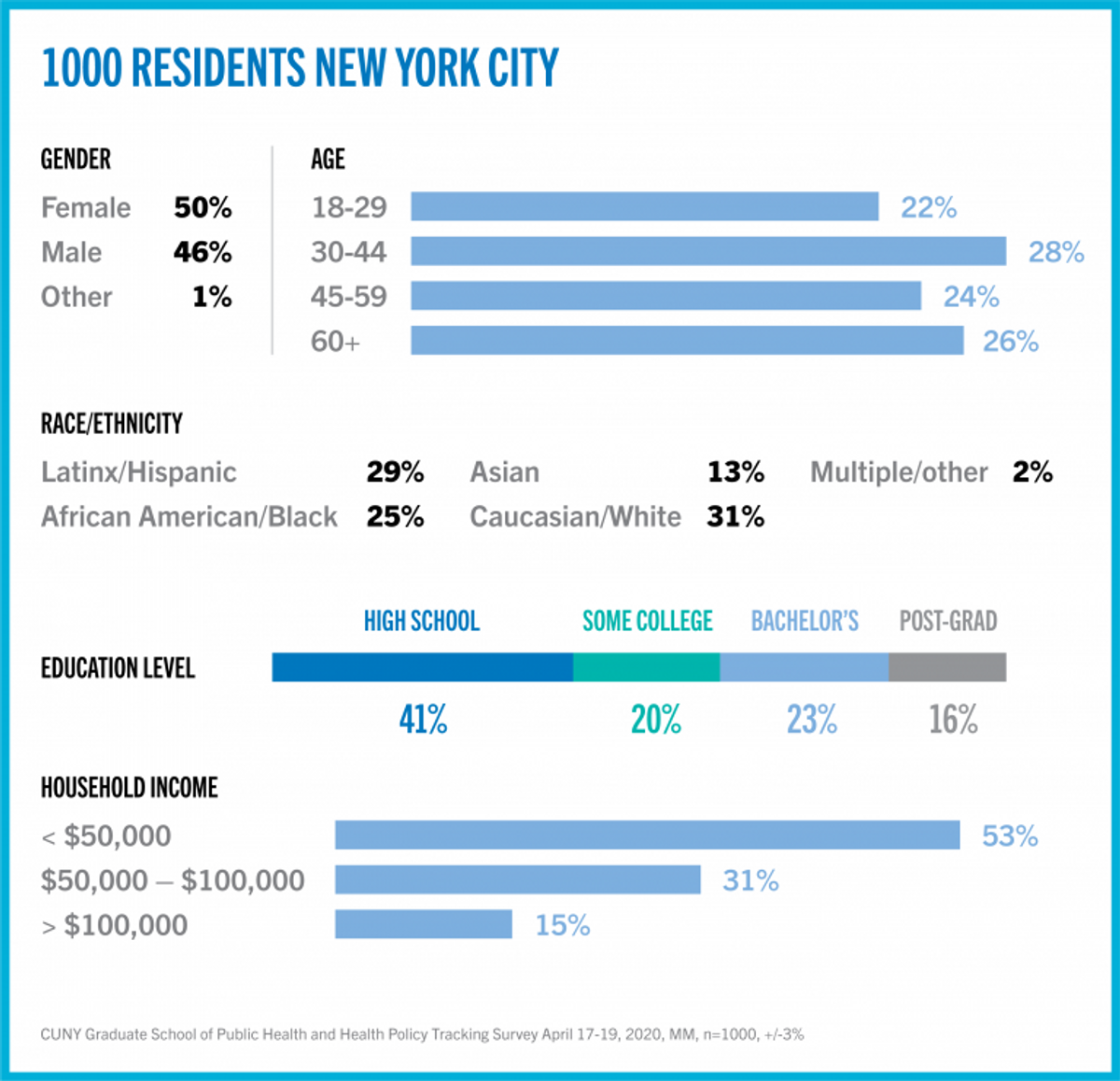 The CUNY Graduate School of Public Health and Health Policy (CUNY SPH) is committed to teaching, research, and service that creates a healthier New York City and helps promote equitable, efficient, and evidence-based solutions to pressing health problems facing cities around the world. 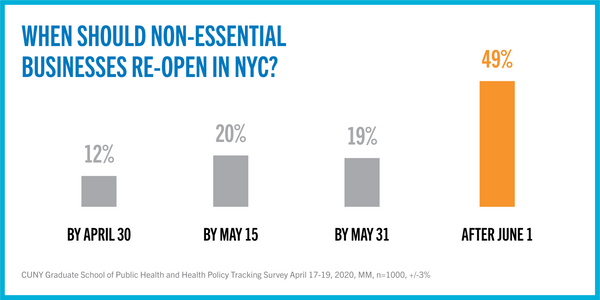 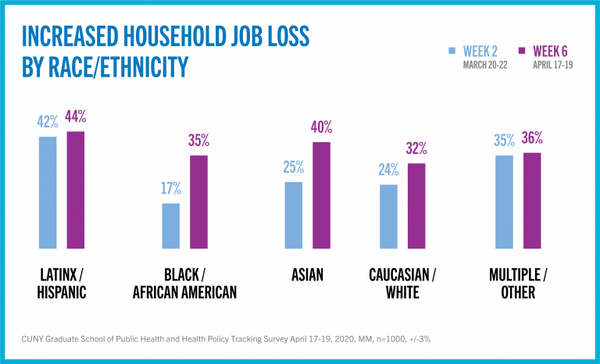 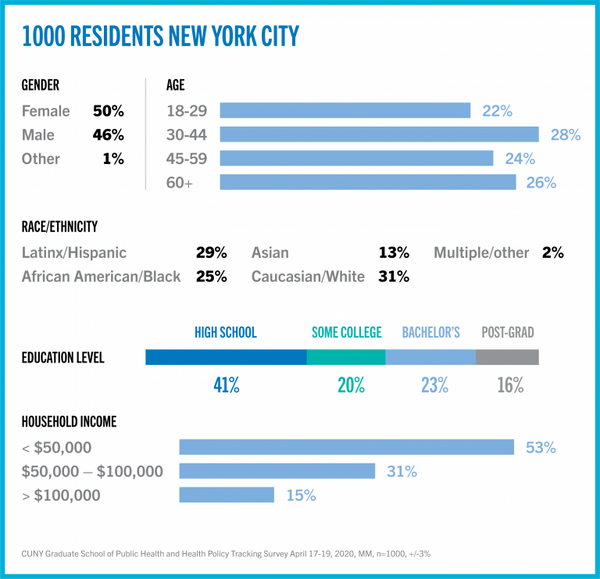