In comparison, President Biden has a 52% approval/33% disapproval job rating, while 15% are unsure.

A majority (64%) of New York voters say that Governor Cuomo should not be reelected for a 4th term in 2022. Even Democrats are split on the issue, with only 52% saying Cuomo should serve another term, and 48% saying that it is time for someone new. 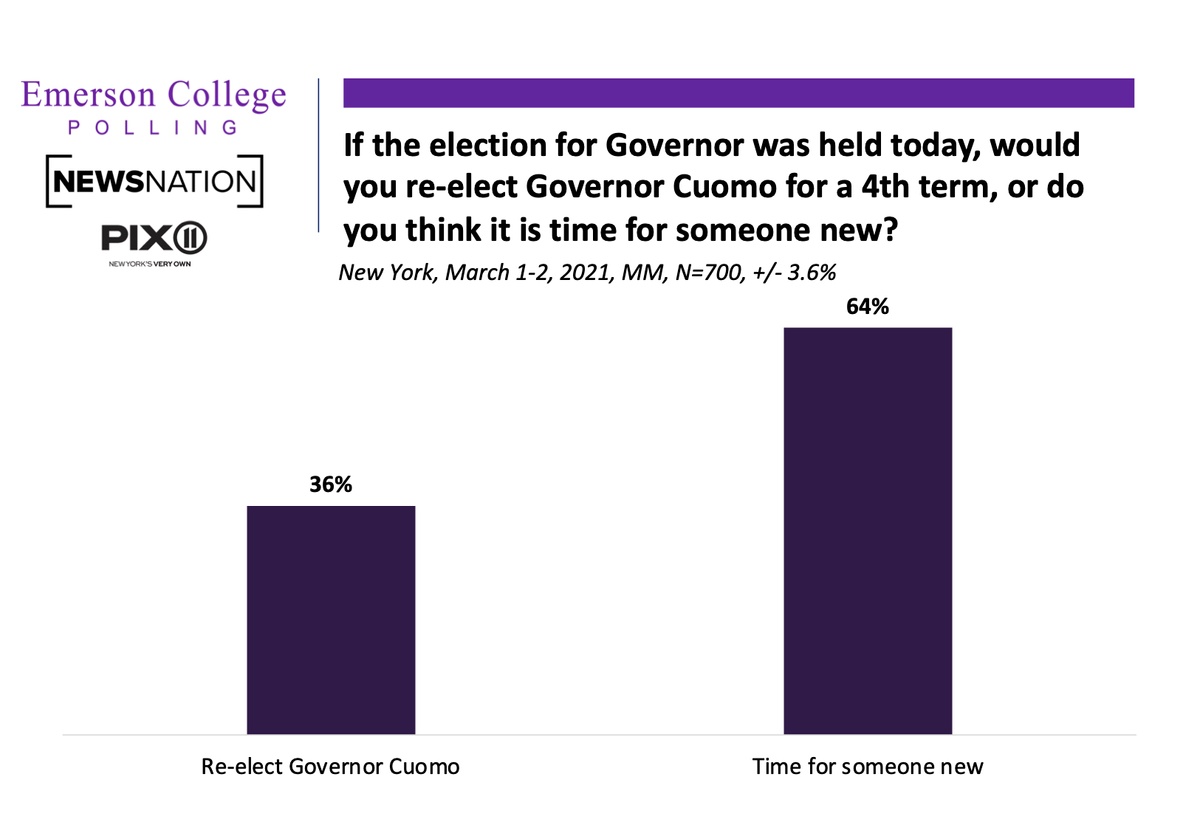 When asked about recent allegations of sexual harassment involving Governor Cuomo, 90% of New York voters report knowing at least something about the issue. Of those who were aware of the allegations, 32% say they are at least somewhat satisfied with Cuomo’s response to the controversy so far, while 42% are unsatisfied. When asked whether or not they believe the allegations are true, the plurality (44%) are unsure at this time. Thirty-eight percent (38%) believe he is guilty, and 18% believe he is not guilty.

Thirty-seven percent (37%) of voters think that the claims of sexual harassment are grounds for resignation, while 34% believe he should not resign as a result of the claims. Twenty-nine percent (29%) are unsure whether he should resign at this time.

Spencer Kimball, Director of Emerson College Polling notes that "while Governor Cuomo has lost significant support statewide since April, he still has a base with women voters. New York women voters approve of his job as governor 43% to 40%, compared to men who disapprove 56% to 33%. New York women were also less likely to think Cuomo was guilty of sexual harassment allegations, with 35% believing he is guilty and 21% believing he is not. This is compared to 41% of men believing he is guilty while 15% believe he is not."

Regarding Governor Cuomo’s reporting of nursing home deaths near the beginning of the Covid-19 pandemic, 92% of respondents reported they have heard of the news. Amongst those who have heard of the news, a majority (59%) reported they were somewhat or very dissatisfied with the Governor’s response to the matter. Fourteen percent (14%) reported they felt unsure or neutral towards his response, and the remaining 27% felt somewhat or very satisfied with the Governor’s response.

A plurality (45%) of voters feel Governor Cuomo should resign over his handling of the pandemic in New York nursing homes. Thirty-six percent (36%) stated they do not think the Governor should resign, and 18% were unsure or held no opinion on the matter. 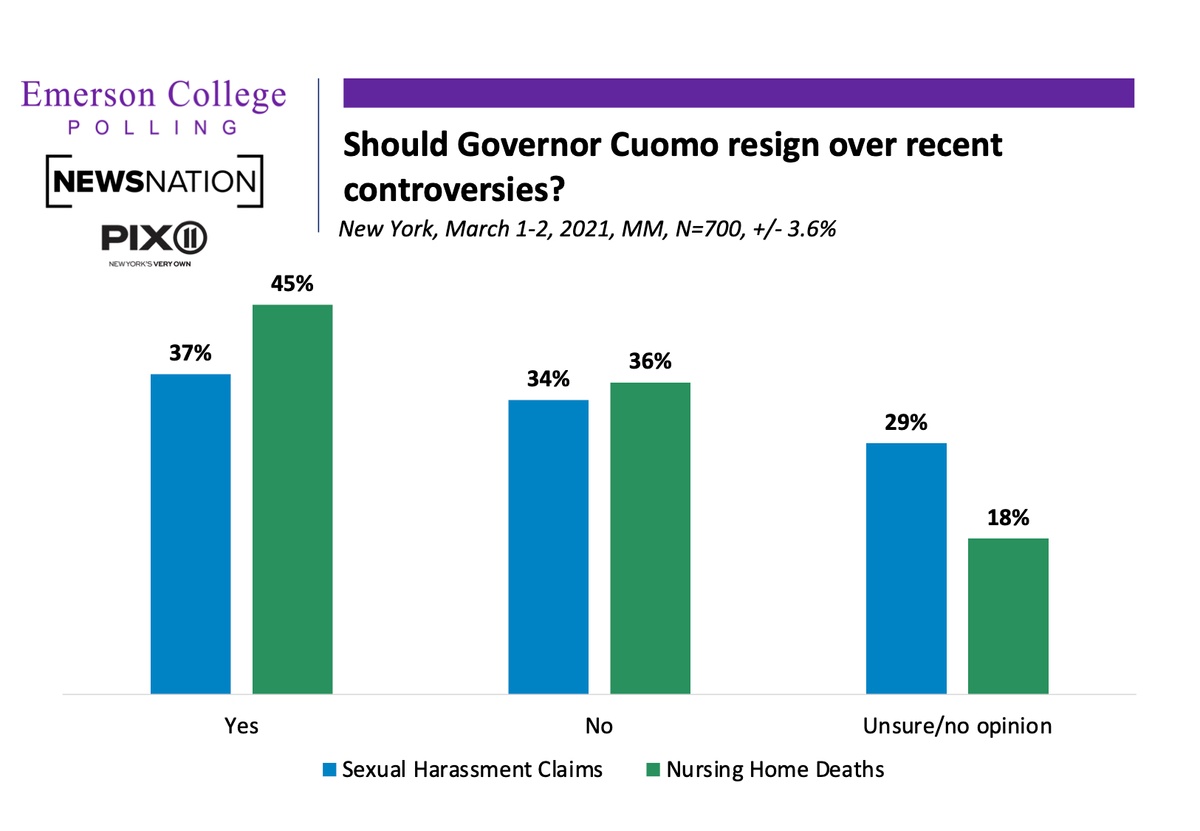 Going forward, a plurality of New York voters (39%) believe that these controversies will seriously affect Governor Cuomo’s ability to lead the state for the remainder of his term. Thirty-one percent (31%) think it will not make a difference, 14% believe he was never a good leader for the state, and 16% are unsure how it will affect his ability to lead.

The New York Emerson College/WPIX-TV/NewsNation poll was conducted March 1-2, 2021. The sample consisted of New York registered voters, n=700, with a Credibility Interval (CI) similar to a poll’s margin of error (MOE) of +/- 3.6 percentage points. The data sets were weighted by gender, age, education, race, party affiliation, and region. It is important to remember that subsets based on gender, age, party breakdown, ethnicity, and region carry with them higher margins of error, as the sample size is reduced. Data was collected using an Interactive Voice Response (IVR) system of landlines, SMS-to-web, and an online panel provided by Prime Panels. 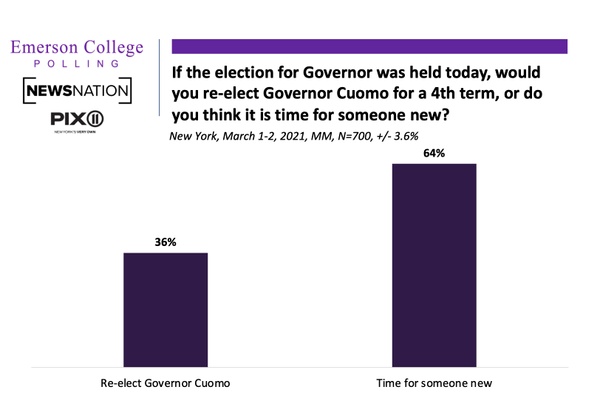 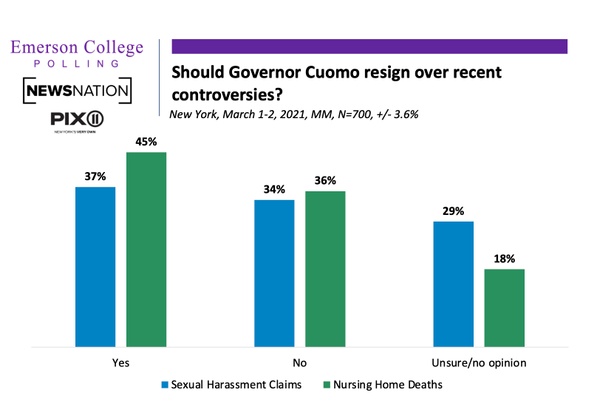