New Jersey 2020: Generational Divide Between Biden and Sanders On Display

A new Emerson College Poll looks to the end of the nomination process, the June 2 New Jersey primary. At this point, former Vice President Joe Biden leads the state with 28% of the vote, followed by Senator Bernie Sanders at 25%, Senator Elizabeth Warren at 15%, former Mayor Michael Bloomberg at 9% and former Mayor Pete Buttigieg and Andrew Yang tied for 5th at 6% each. The data was collected January 16-19, 2020, mix mode, n=388, +/-4.9%. 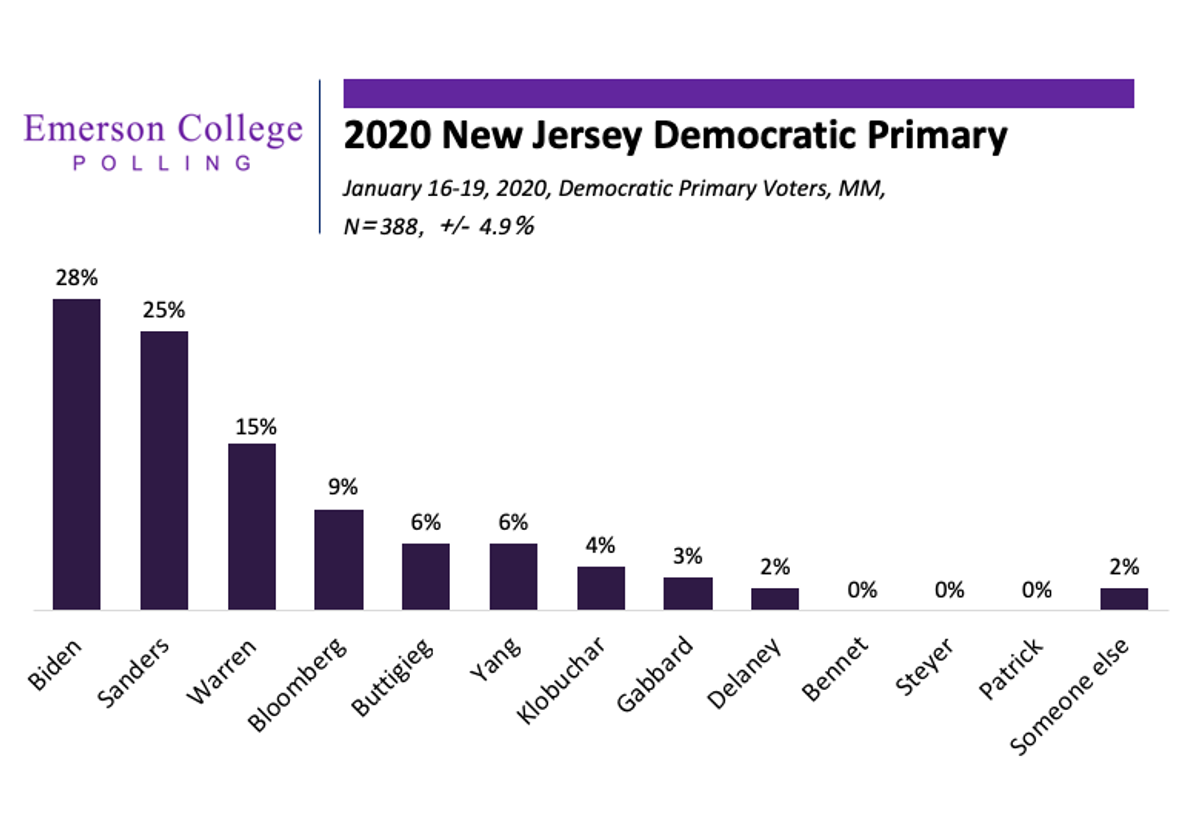 Spencer Kimball, Director of Emerson College Polling notes that “Bloomberg’s 9% is the highest we have seen for the former New York Mayor in any state poll this year. If his late start strategy is going to work, he will need to perform well in delegate-rich states such as New Jersey at the end of the nomination season.”

In New Jersey, Biden continues to be popular with older voters, 40% of those over 50 support him. Biden continues to struggle with younger voters, taking only 9% of the vote of those between 18-29 years old. In contrast, Sanders captures the youth vote with 36% support of those under 50, but the Vermont Senator has only 7% support of those over 65. Warren is the third most popular candidate in all four age groups with a range of 12% to 22% support. 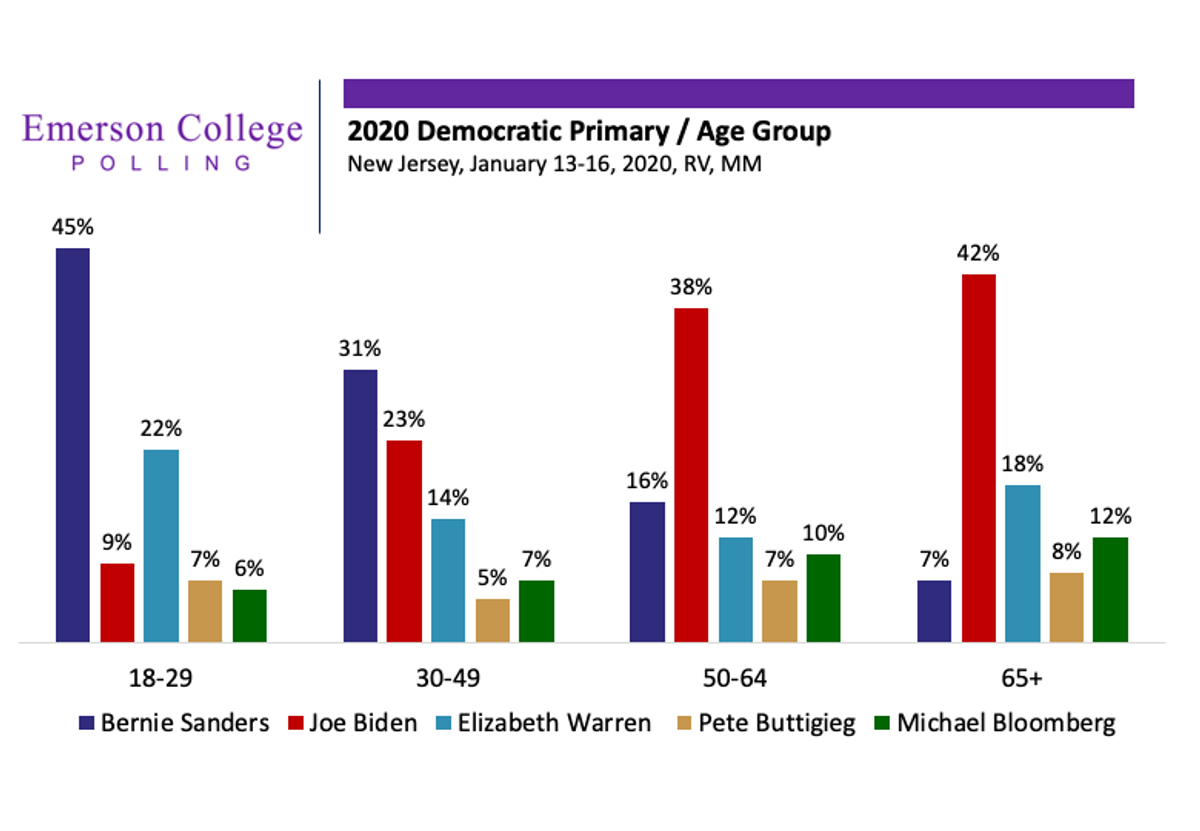 Sanders leads among Hispanic voters with 31%, followed by Warren with 28%, and Biden with 16%. Among African American voters, Biden leads with 47% of the vote, followed by Warren at 17% and Sanders at 14%. This bodes well for Biden as it mirrors his exceptionally strong African American support in South Carolina, one of the first primaries. White voters in New Jersey break toward Sanders at 27%, then Biden at 23%, and 13% prefer Warren.

About half of Democratic primary voters (48%) say they will definitely vote for the candidate they prefer now, while 52% indicate they could change their mind and vote for another candidate by June.

Voters were asked about the impact of their representative in Congress voting in favor of the impeachment of President Trump - if it would make them more likely, or less likely to support his or her re-election next year; or, would their congressperson’s vote on impeachment have no effect on who they would support for Congress next year.

The New Jersey Emerson College poll was conducted January 16-19, 2020 under the Supervision of Assistant Professor Spencer Kimball. The sample consisted of registered voters, n=788, with a Credibility Interval (CI) similar to a poll’s margin of error (MOE) of +/- 3.9 percentage points. The data was weighted based on 2016 voter model of party affiliation, age, race, education, gender and region. It is important to remember that subsets based on gender, age, party breakdown, ethnicity and region carry with them higher margins of error, as the sample size is reduced. Data was collected using both an Interactive Voice Response (IVR) system of landlines only (n= 485) and an online panel provided by MTurk (n= 303). 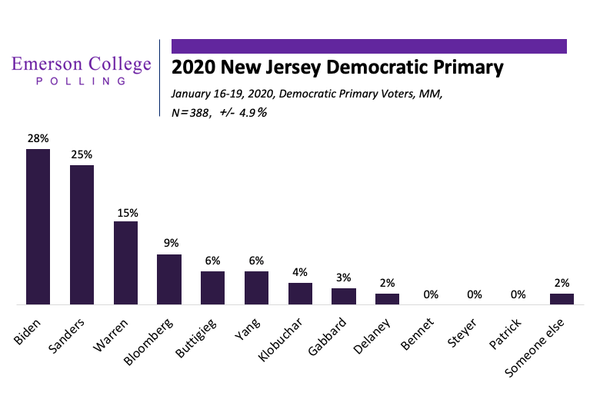 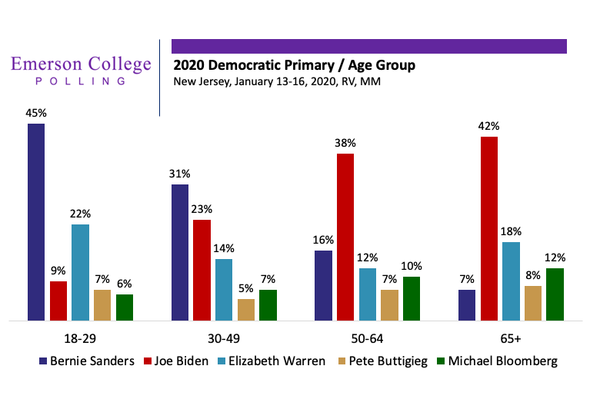