The final 7 News/ Emerson College tracking poll of the New Hampshire Democratic Primary finds Sen. Bernie Sanders holding his lead in the Democratic Primary with 30%, followed by fmr. Mayor Pete Buttigieg with 23%, Sen. Amy Klobuchar with 14%, Sen. Elizabeth Warren with 11%, and fmr. V.P. Joe Biden with 10%. No other candidate is above 4%. Data was collected February 8-9, 2020, mixed mode, n=500, margin of error of +/- 4.3%. 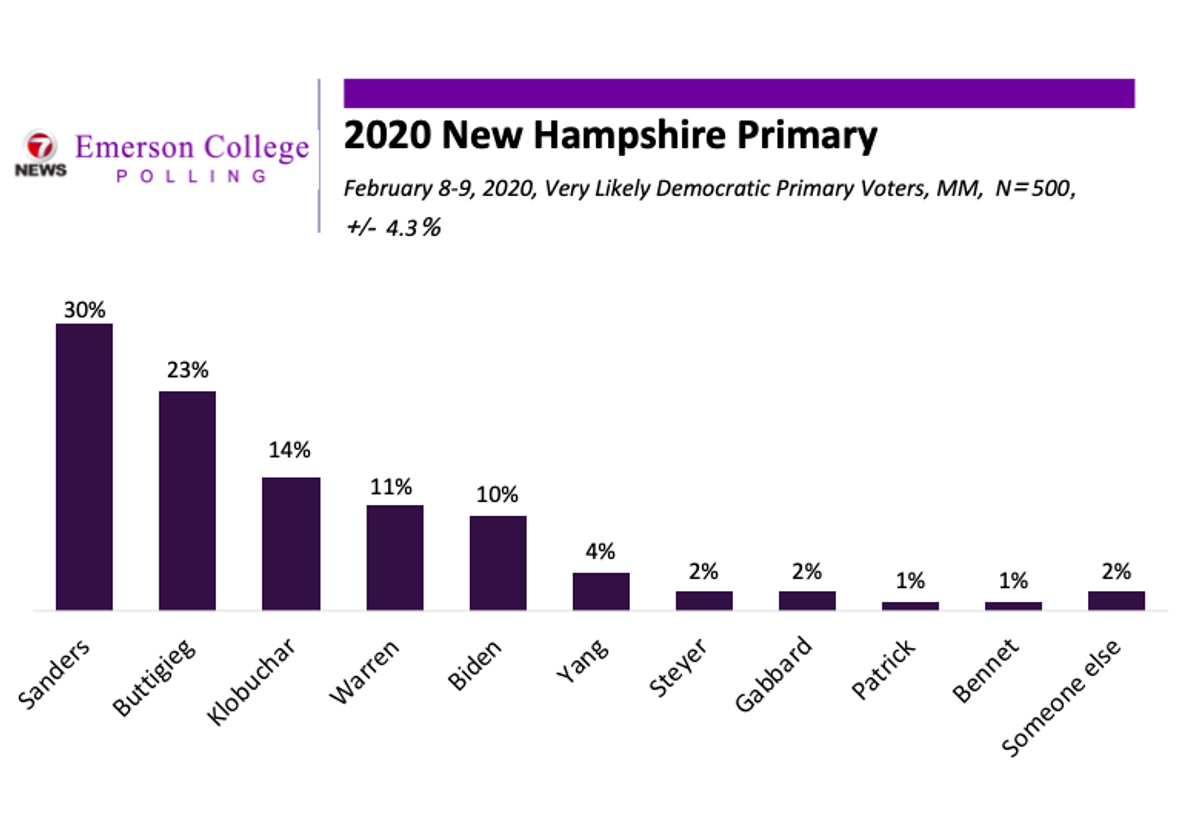 Since yesterday, Sanders has held his support, Buttigieg has gained three points, Klobuchar has gained one point, and Warren and Biden have lost one point. 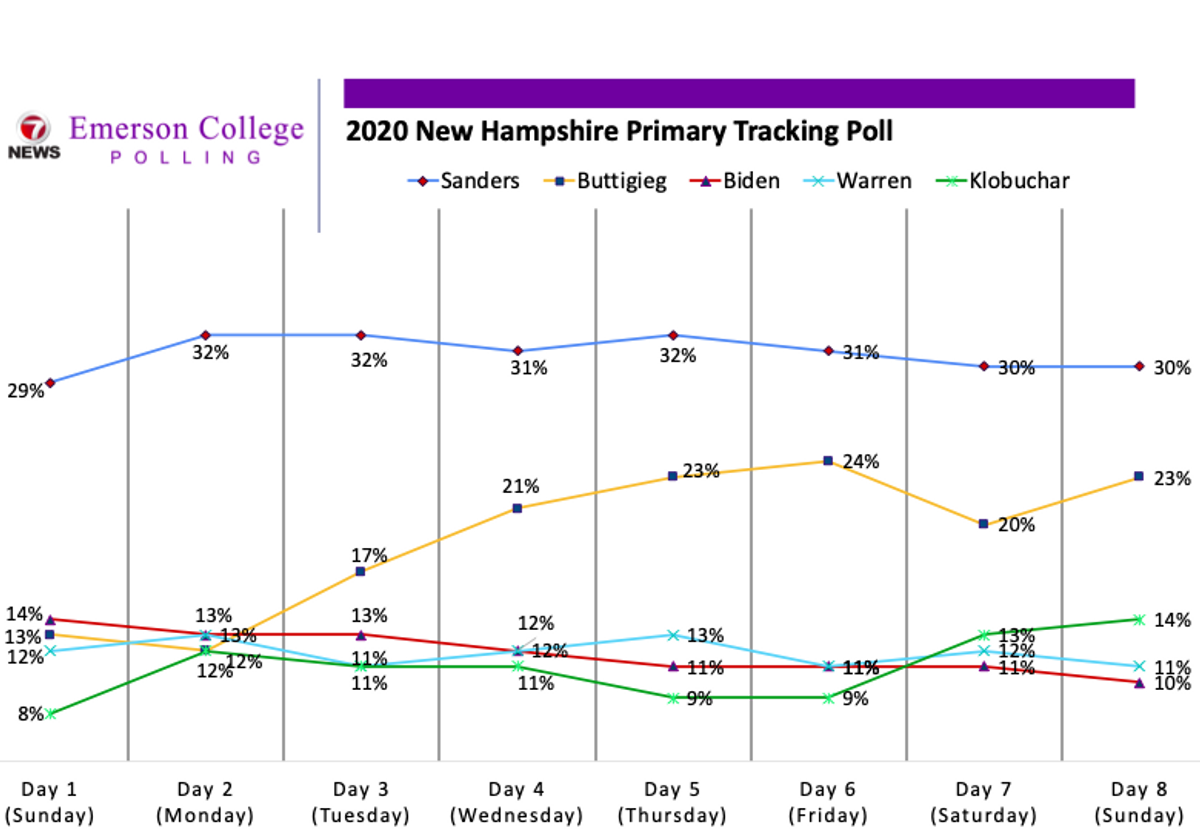 Spencer Kimball, Director of Emerson College Polling, explains the state of the race in New Hampshire: “While Sanders has a lead going into the election, Buttigieg has closed the gap and could still pull off a New Hampshire surprise, as he and Sanders are within the margin of error. Klobuchar continues to move up, but she still trails the top two candidates by a significant margin. Warren and Biden could still get as high as third but today's data had them going in the wrong direction. ”

Continuing the trend found throughout this tracking poll, Sanders pulls very strong support from younger voters. Among voters under 50 years old, he leads with 42% support followed by Buttigieg with 24%, and Warren with 11%. Among voters 50 and over, Buttigieg leads at 23%, followed by Klobuchar at 22%, Sanders at 19%, Biden at 15% and Warren at 10%.

Sanders holds a strong lead among “very liberal” voters garnering 54% support among that group. Following Sanders among those very liberal voters is Warren at 21%, and no other candidate is in double digits. Among “somewhat liberal” voters, Sanders also leads with 32% followed by Buttigieg with 29%, Klobuchar with 14% and Warren with 10%. And among “moderate” or “conservative” voters, Buttigieg holds the lead with 28% support. Following him among those voters is Klobuchar with 20%, Biden with 15% and Sanders with 14%.

Voters were asked again to pick a candidate, regardless of who they are going to vote for, who they expect to be the Democratic nominee. Sanders led this question with 44%, followed by Buttigieg with 16%, Biden with 14%, Klobuchar at 9%, Bloomberg at 8%, and Warren at 6%. Since yesterday, Sanders, Buttigieg, Warren, and Bloomberg have stayed the same, Klobuchar increased two points and Biden decreased one point. 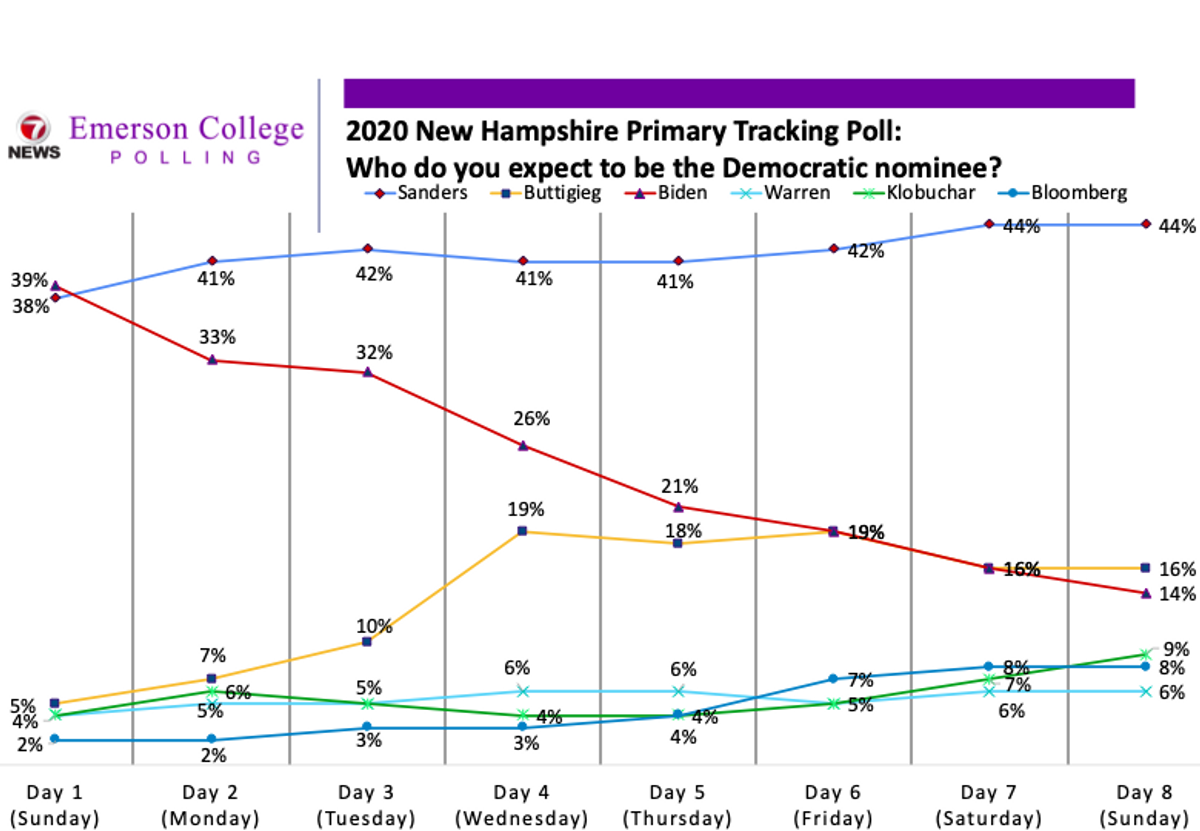 Those voting in the Republican primary in New Hampshire were also polled; 84% plan to vote for President Trump, compared to 16% who are voting for former Massachusetts governor Bill Weld. 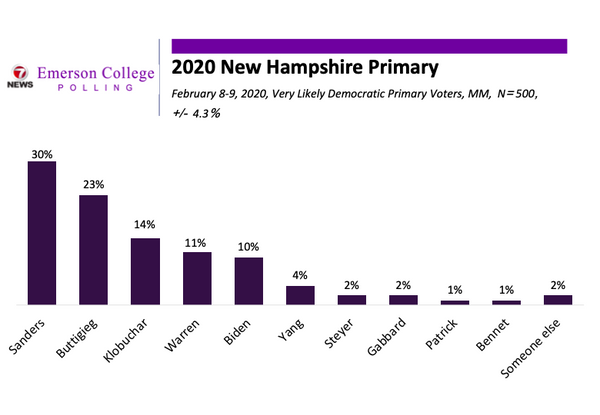 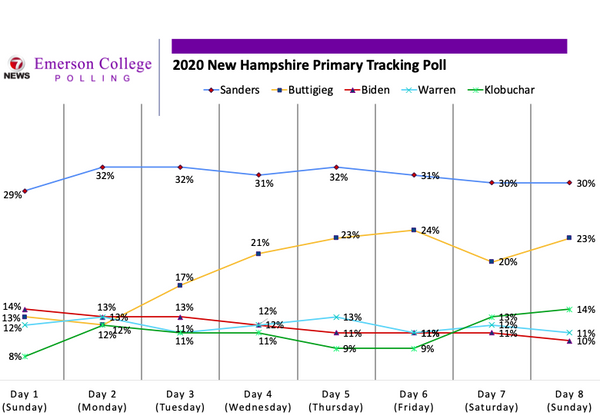 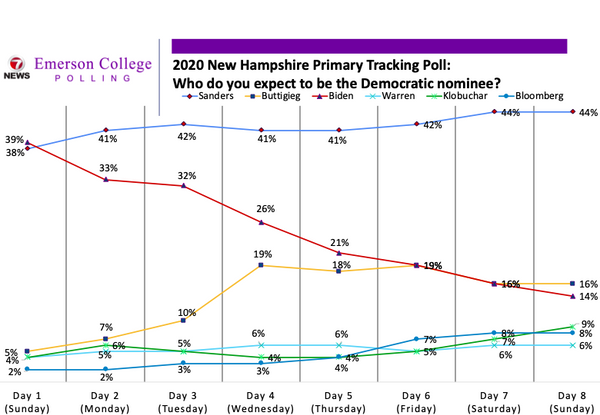