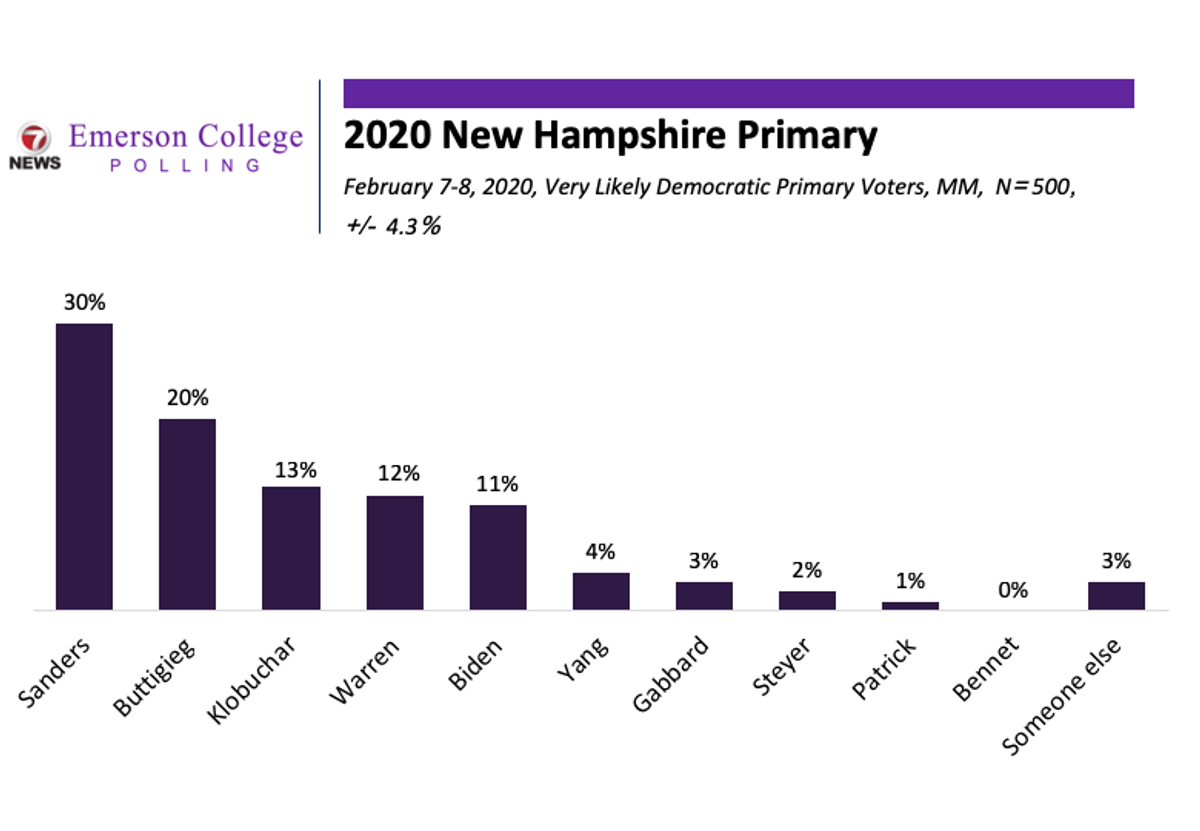 Spencer Kimball, Director of Emerson College Polling, explains the changes: “Both Sanders and Buttigieg received a bounce in our poll numbers since Iowa, but it looks like the debate on Friday may have stymied momentum for the front runners. The candidate who seems to have been able to take advantage of the event is Klobuchar who gained four points.” 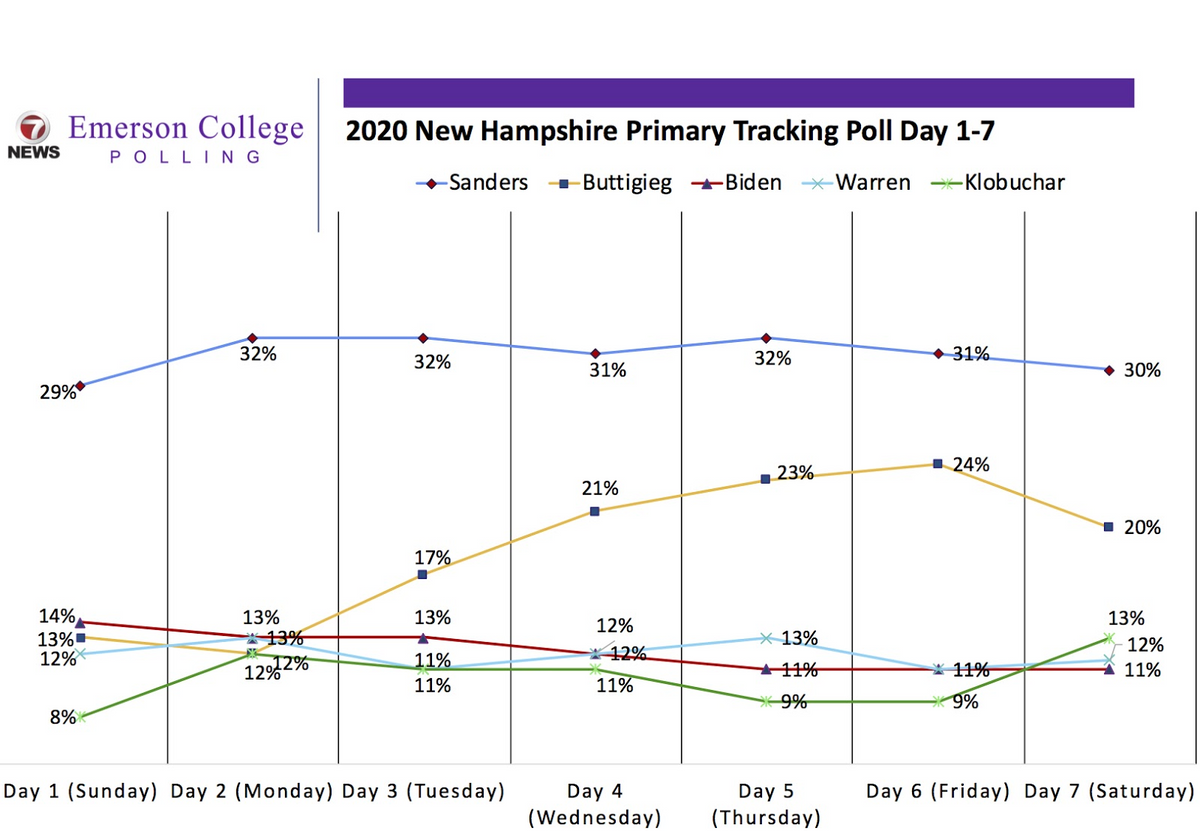 Continuing the trend found in the past Emerson College tracking polls, Sanders pulls very strong support from younger voters. Among voters under 50 years old, he leads with 44% support followed by Buttigieg with 17%, and Warren with 13%. Among voters 50 and over, Buttigieg leads at 23% (an eight point drop from yesterday), followed by Sanders and Klobuchar at 19%, Biden at 16% and Warren at 11%.

Sanders holds a strong lead among “very liberal” voters garnering 53% support among that group. Following Sanders among those very liberal voters is Warren at 24%, and no other candidate is in double digits. Among “somewhat liberal” voters, Sanders also leads with 37%, followed by Buttigieg with 22%, Klobuchar with 12% and Warren with 11%. And among “moderate” or “conservative” voters, Buttigieg holds the lead with 26% support. Following him among those voters is Klobuchar with 17%, Biden with 15% and Sanders with 14%.

Voters were asked again to pick a candidate, regardless of who they are going to vote for, who they expect to be the Democratic nominee. Sanders led this question with 44%, followed by Buttigieg and Biden at 16%, Bloomberg at 8% and Klobuchar at 7%. Since yesterday, Biden and Buttigieg decreased on this question by three points, Sanders has gained two points, Bloomberg gained one point and Klobuchar gained two. 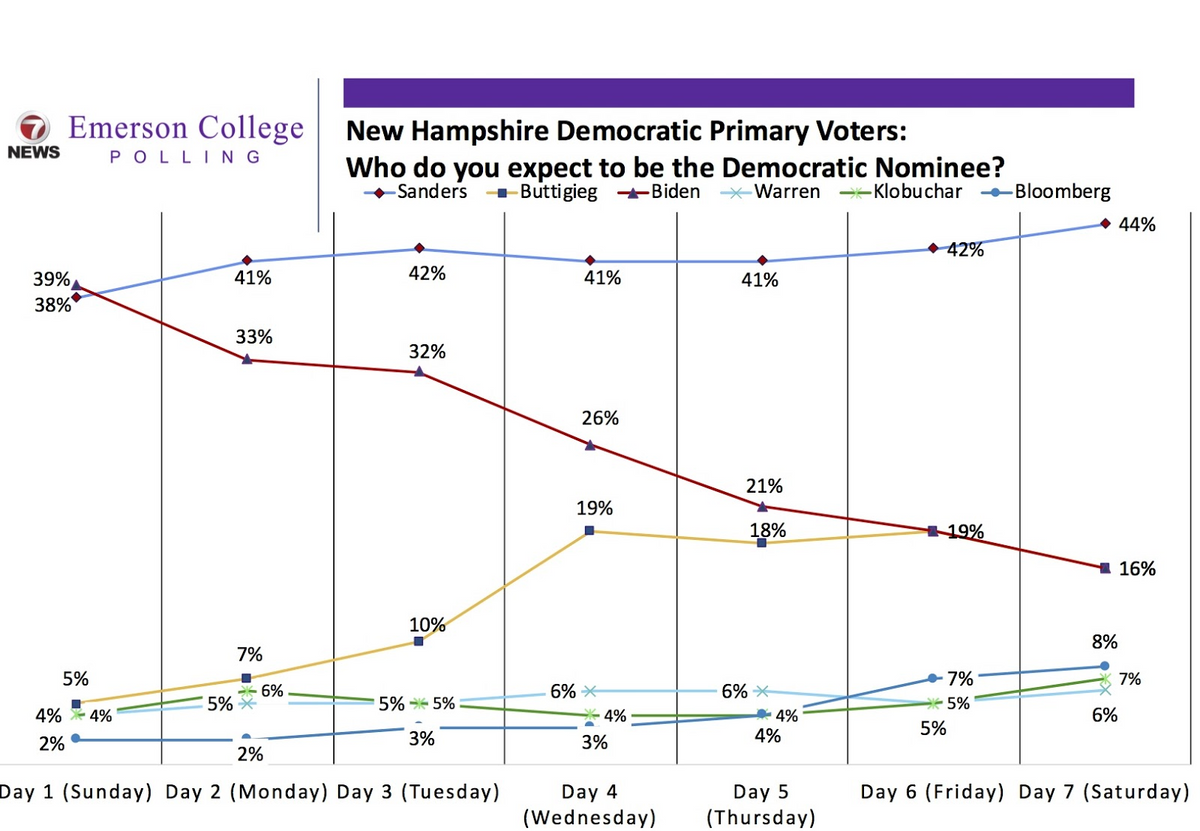 ﻿For the questions of the day, voters were asked how important they think experience in Washington DC is for a presidential candidate, 74% said it was somewhat or very important, 13% were neutral, and 13% said it was not very important or not important at all. Voters were also asked if they think this will be the last time New Hampshire holds the first primary in the nation. The majority of New Hampshire voters think they will continue to have the first in the nation primary (68%), 8% said they think it will be the last time, while 24% were unsure.

The New Hampshire 7 News/ Emerson College poll was conducted February 7-February 8, 2020. The sample consisted of registered Democratic and Independent likely voters, n=500, with a Credibility Interval (CI) similar to a poll’s margin of error (MOE) of +/- 4.3 percentage points. The data was weighted based on gender, age, party, education, region, and based on 2016 turnout model. It is important to remember that subsets based on gender, age, party breakdown, ethnicity and region carry with them higher margins of error, as the sample size is reduced. Data was collected using an Interactive Voice Response (IVR) system of landlines only (n=331), cell phones (n=147) and online panels provided by MTurk (n=42). 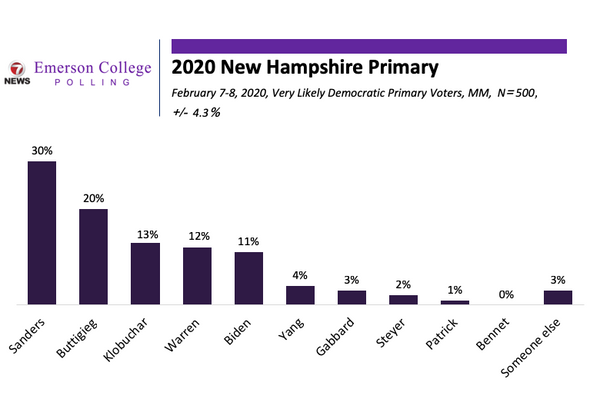 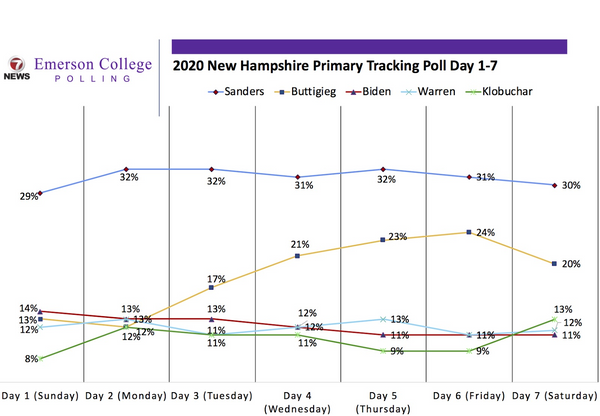 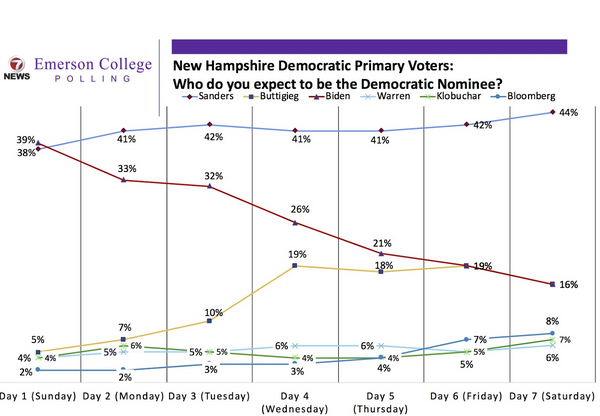