Day 6 of the 7 News/ Emerson College tracking poll of the New Hampshire Democratic Primary finds Sen. Bernie Sanders holding his lead in the Democratic Primary with 31%, followed by fmr. Mayor Pete Buttigieg with 24%, Sen. Elizabeth Warren and fmr. V.P. Joe Biden with 11%, and Sen. Amy Klobuchar with 9%. No other candidate is above 5%. Data was collected February 6-7, 2020, mixed mode, n=500, margin of error of +/- 4.3%. 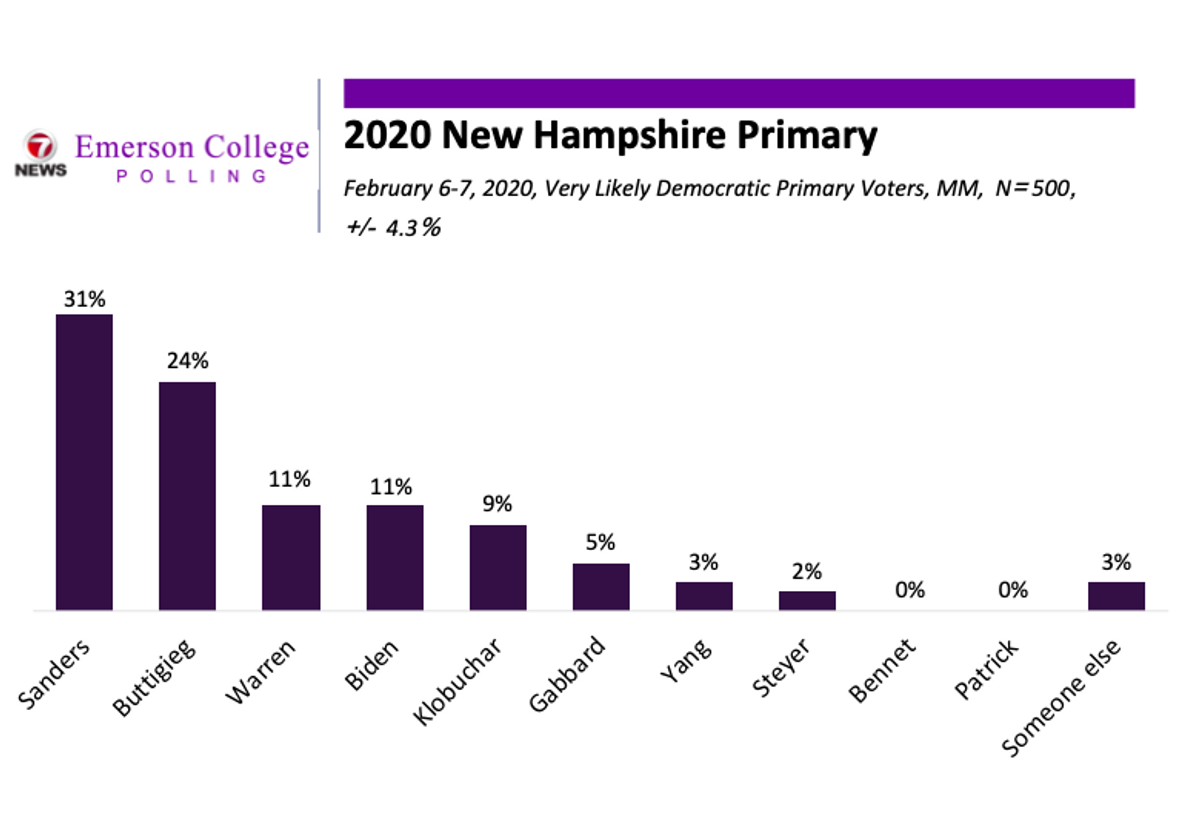 Since yesterday, Sanders has lost one point, Buttigieg has gained one point (an overall 11 point increase since Emerson College’s first New Hampshire Tracking poll five days ago), Warren has lost two points, and Biden and Klobuchar have held their support. 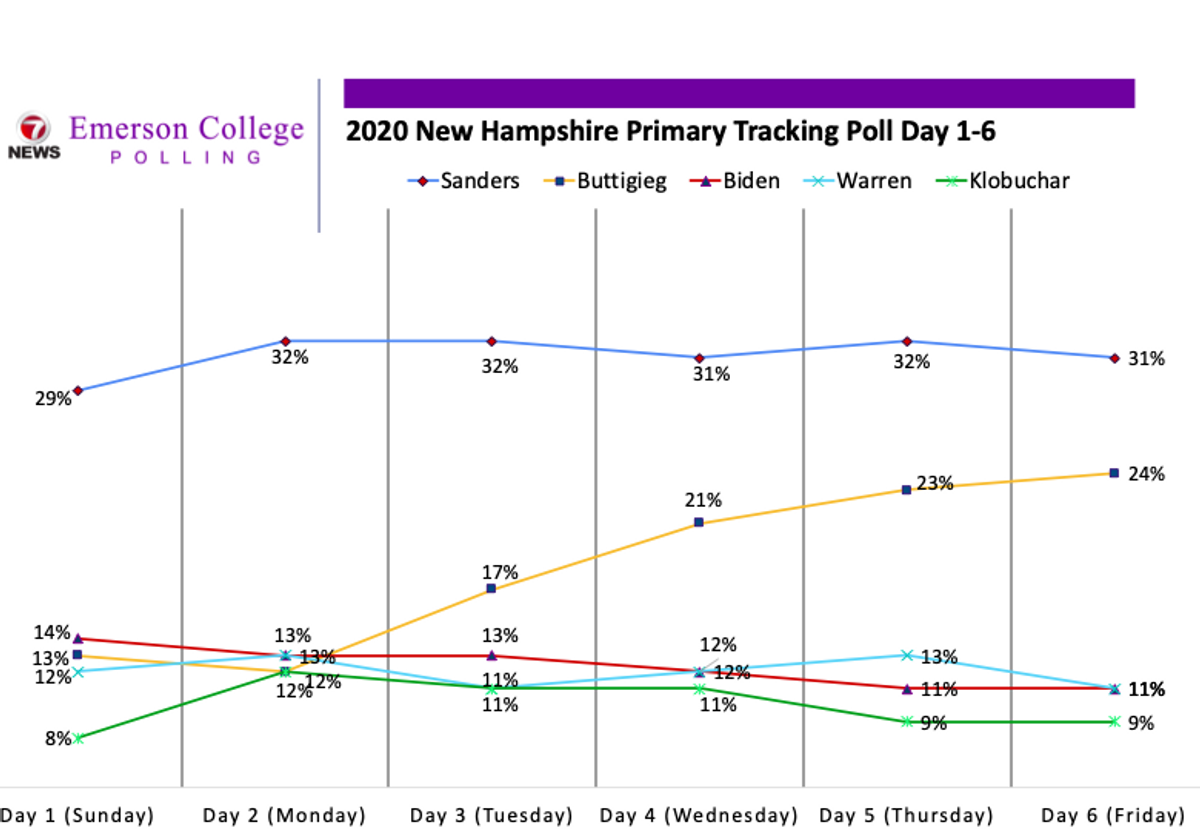 Spencer Kimball, Director of Emerson College Polling explains, “many voters are still on the fence on who they will support but that does not include Sanders supporters, which means that the other candidates won’t be able to pull any of his vote which leaves them fighting amongst themselves”.

Continuing the trend found in the past Emerson College tracking polls, Sanders pulls very strong support from younger voters. Among voters under 50 years old, he leads with 44% support followed by Buttigieg with 17%, and Warren with 13%. Among voters 50 and over, Buttigieg leads at 31%, followed by Sanders at 20%, Biden at 17% and Warren at 14%.

Sanders holds a strong lead among “very liberal” voters garnering 51% support among that group. Following Sanders among those very liberal voters is Warren at 24%, and Buttigieg at 12%. Among “somewhat liberal” voters, Sanders also leads with 43% followed by Buttigieg with 22%, Warren with 11% and Biden with 9%. And among “moderate” or “conservative” voters, Buttigieg holds the lead with 29% support. Following him among those voters is Biden with 15%, Sanders with 14% and Klobuchar with 13%.

Voters were asked again to pick a candidate, regardless of who they are going to vote for, who they expect to be the Democratic nominee. Sanders led this question with 42%, followed by Buttigieg and Biden at 19% and Bloomberg at 7%. Since yesterday, Biden has decreased on this question by three points, Sanders has gained one point, Buttigieg held his support and Bloomberg gained three points. 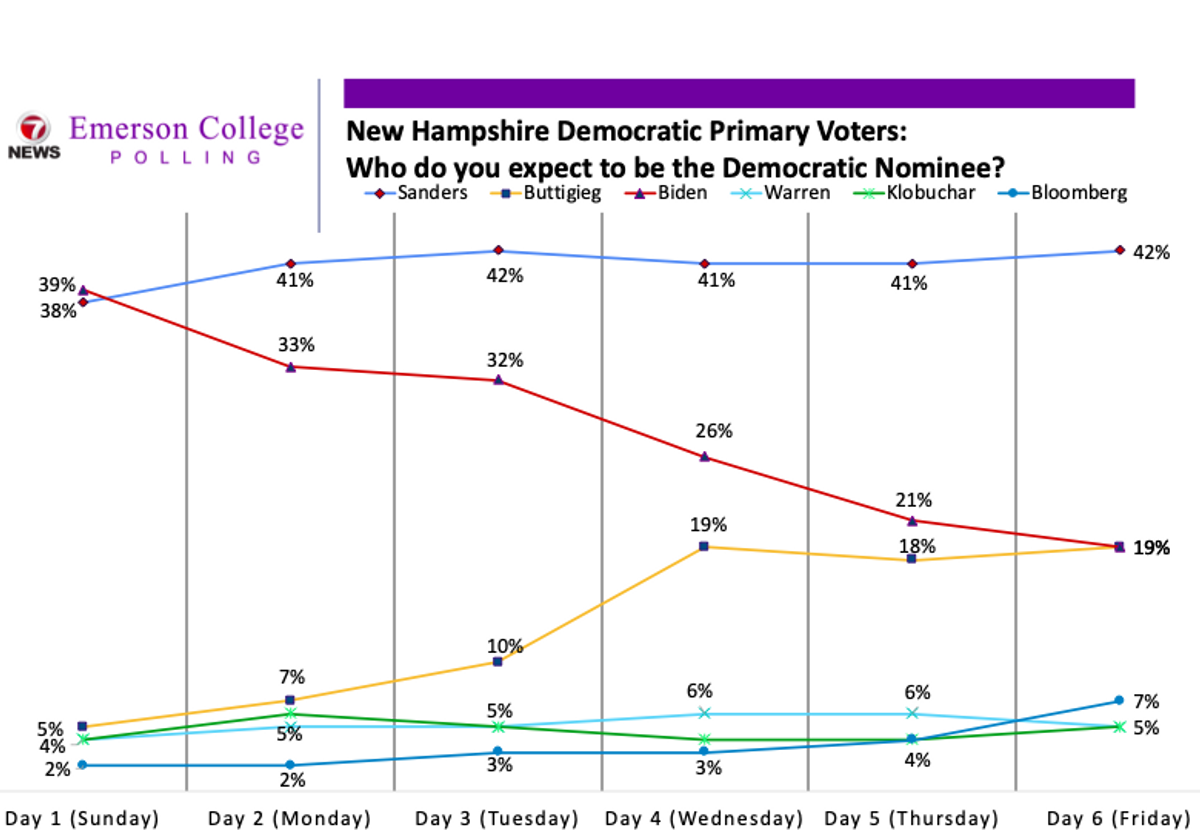 The New Hampshire 7 News/ Emerson College poll was conducted February 6-February 7, 2020. The sample consisted of registered Democratic and Independent likely voters, n=500, with a Credibility Interval (CI) similar to a poll’s margin of error (MOE) of +/- 4.3 percentage points. The data was weighted based on gender, age, education, region, and based on 2016 turnout model. It is important to remember that subsets based on gender, age, party breakdown, ethnicity and region carry with them higher margins of error, as the sample size is reduced. Data was collected using an Interactive Voice Response (IVR) system of landlines only (n=332), cell phones (n=99) and online panels provided by MTurk (n=68). 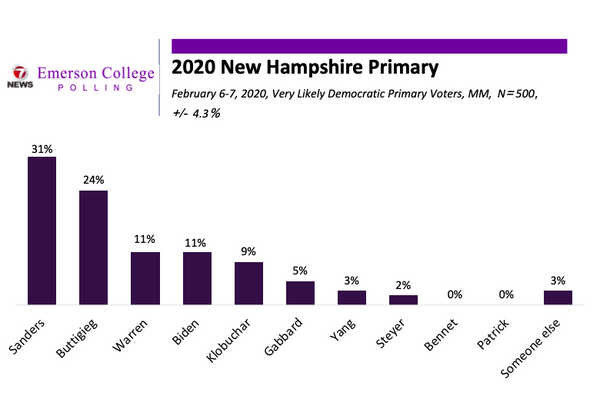 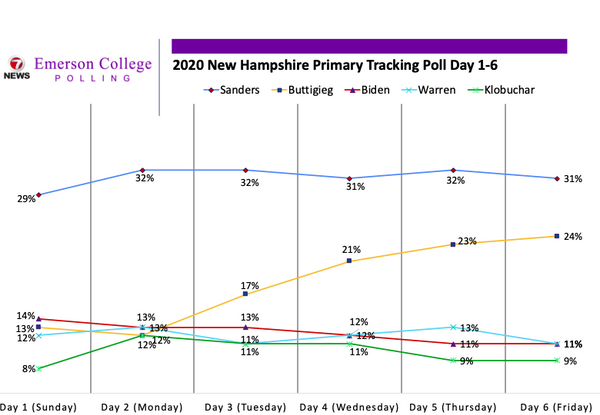 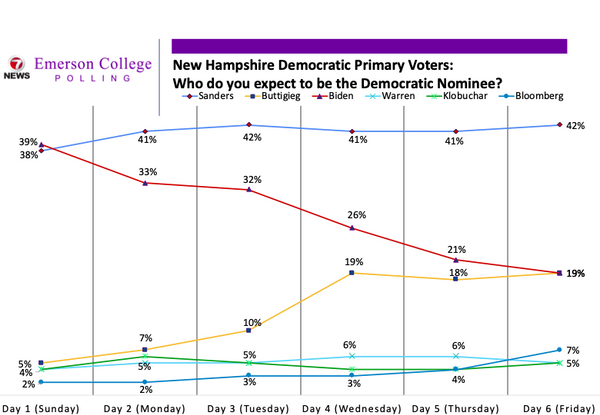