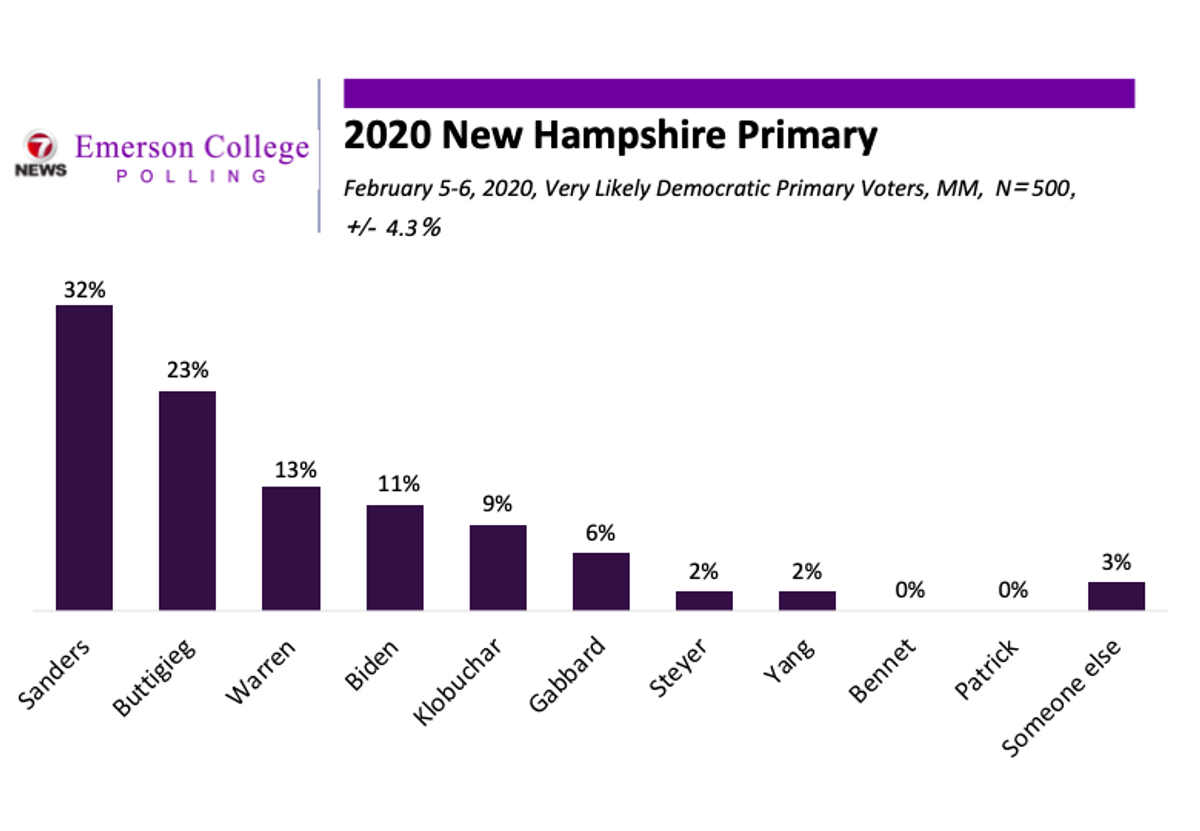 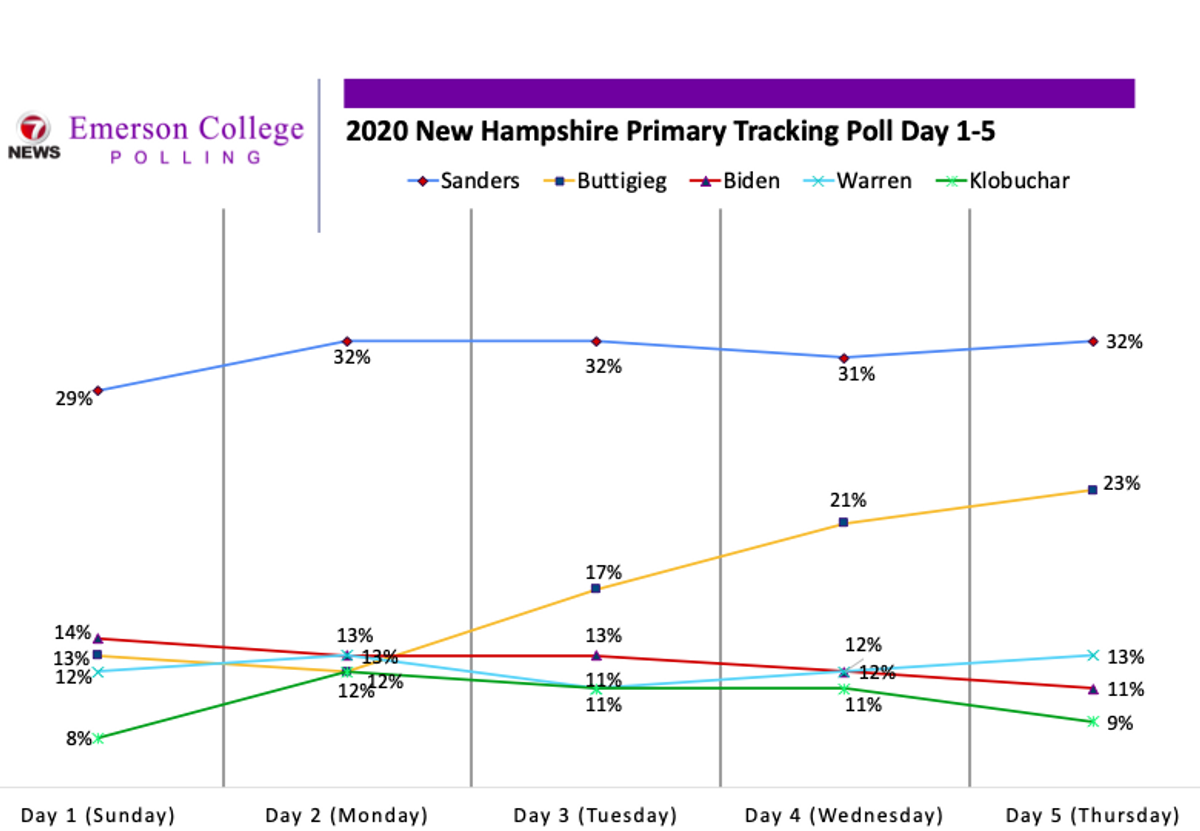 Spencer Kimball, Director of Emerson College Polling explains, “This is beginning to turn into a two-person race in New Hampshire between Bernie Sanders and Pete Buttigieg. All eyes will be on Warren, Biden, and Klobuchar at the debate on Friday night to see if any of them can create a game-changing moment for their campaigns.”

Continuing the trend found in the past Emerson College tracking polls, Sanders pulls very strong support from younger voters. Among voters under 50 years old, he leads with 44% support followed by Buttigieg with 17%, and Warren with 13%. Among voters 50 and over, Buttigieg leads at 31%, followed by Sanders at 20%, Biden at 17% and Warren at 14%

Sanders holds a strong lead among “very liberal” voters garnering 46% support among that group. Following Sanders among those very liberal voters is Warren at 32%, and Buttigieg at 11%. Among “somewhat liberal” voters, Sanders also leads with 43% followed by Buttigieg with 20%, Warren with 12% and Biden with 11%. And among “moderate” or “conservative” voters, Buttigieg holds the lead with 31% support. Following him among those voters is Sanders with 16%, Biden with 13%, and Klobuchar with 12%.

For the questions of the day, voters were asked about the motivation of Senator Mitt Romney’s decision to vote to convict President Trump: if it was out of personal conviction or a political calculation. The majority of Democratic Primary Voters (64%) said it was out of personal conviction, 21% thought it was a political calculation, and 15% were unsure. Voters were also asked if the handling of the impeachment matter by the House and Senate Democrats made them more or less likely to vote for Democratic candidates in the year 2020. The plurality of New Hampshire Democrats (48%) said it made them more likely to vote for Democrats, 14% said it made them less likely to vote for Democrats, and 38% said it had no effect.

The New Hampshire 7 News/ Emerson College poll was conducted February 5-February 6, 2020. The sample consisted of registered Democratic and Independent likely voters, n=500, with a Credibility Interval (CI) similar to a poll’s margin of error (MOE) of +/- 4.3 percentage points. The data was weighted based on gender, age, education, region, and based on 2016 turnout model. It is important to remember that subsets based on gender, age, party breakdown, ethnicity and region carry with them higher margins of error, as the sample size is reduced. Data was collected using an Interactive Voice Response (IVR) system of landlines only (n=318), cell phones (n=119) and online panels provided by MTurk (n=62). 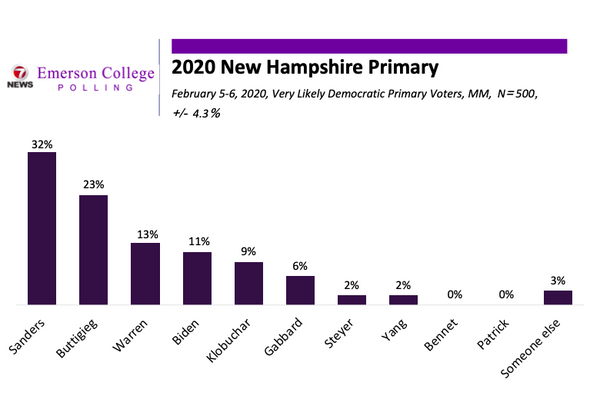 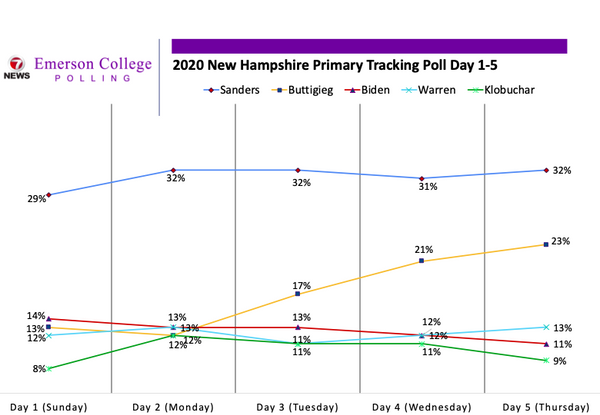