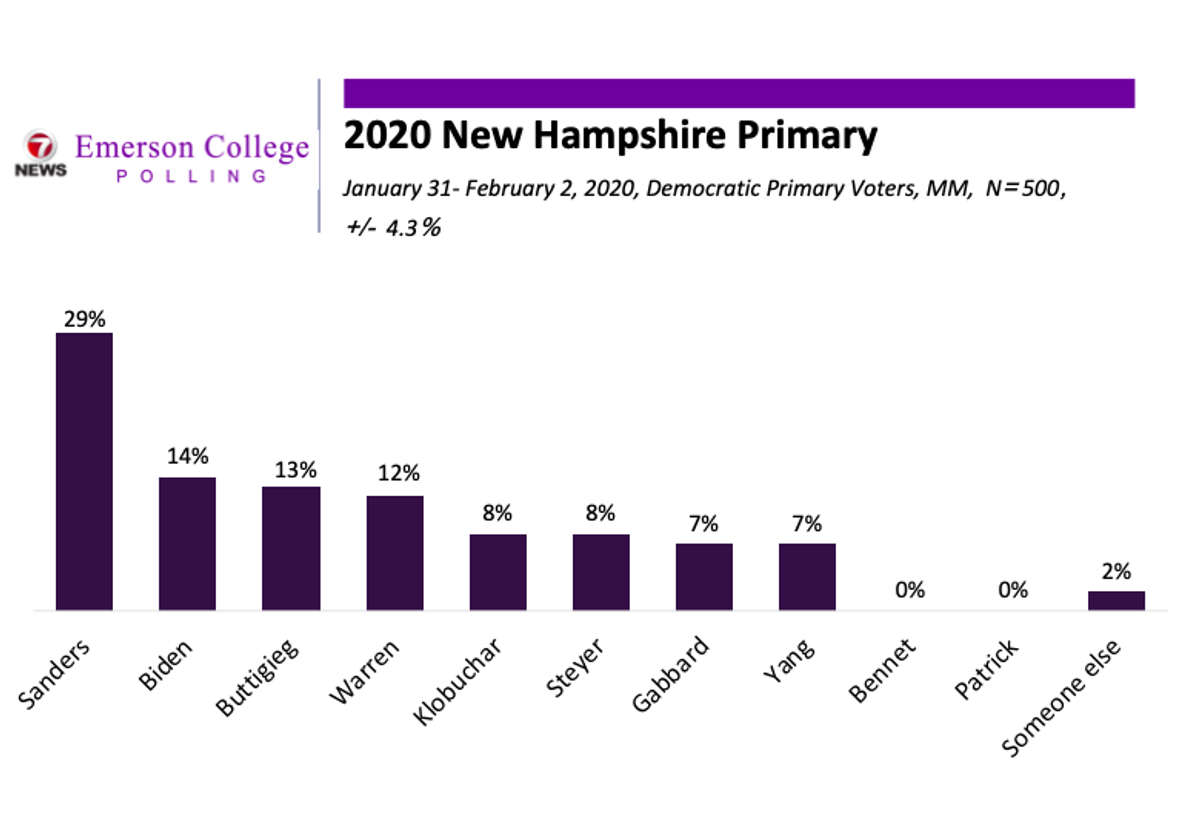 This represents a shift from the previous Emerson College poll of New Hampshire, as Sanders has increased his lead over the other candidates by ten points. Since mid-January, Sanders has gained six points, Biden has maintained his support level, Buttigieg has dropped five points, and Warren has lost two.

Continuing the trend found in other Emerson College polls, Sanders pulls very strong support from younger voters. Among voters under 50 years old, he leads with 38% support and is followed by Warren with 13%, Buttigieg with 11%, Gabbard with 10% and Yang with 9%.  In contrast among voters 50 and over, Biden leads with 24%, followed by Sanders with 20%, Buttigieg with 15%, and Klobuchar with 12%. 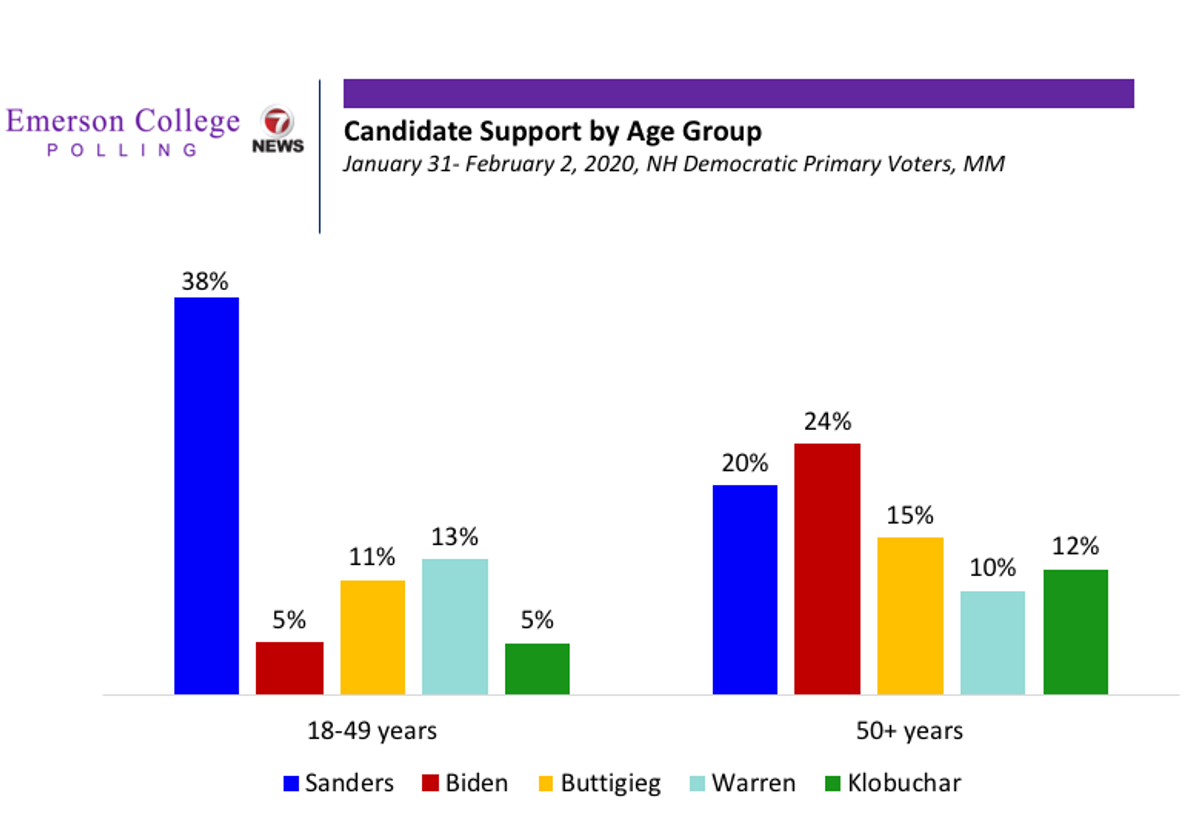 Sanders holds a strong lead among “very liberal” voters with 39% support, followed by Warren with 27% and Buttigieg and Gabbard with 10%. Among “somewhat liberal” voters, Sanders also leads with 36% support, followed by Biden with 19% and Buttigieg with 14%. In a departure from previous Emerson College polls, Sanders also leads among “moderate” and “conservative,” voters, receiving 20% support among that group. Following Sanders is Biden with 19%, Buttigieg with 13% and Klobuchar with 12%.

Looking at gender, Sanders does 11 points better among women than among men, with 34% and 23% support respectively. The inverse is true of Yang and Gabbard, as they both garner 3% support among women; Yang receives 11% and Gabbard receives 12% support from men.

Voters were also asked to pick the candidate they believe will become the eventual nominee. Most were split between Biden and Sanders;  39% picked Biden and 38% selected Sanders. No other candidate is higher than 5% in this question.

The majority of voters, 55% said the most important factor is to select a nominee with the best chance to defeat Donald Trump, in contrast to 46% who select a candidate who is closer to their views on issues.

The majority (87%) of New Hampshire Primary voters say the events of Monday’s Iowa Caucus will not have an impact on their vote, while 13% say the results of the Caucus will impact who they vote for.

The New Hampshire Emerson College poll was conducted January 31-February 2, 2020. The sample consisted of registered Democratic and Independent voters, n=500, with a Credibility Interval (CI) similar to a poll’s margin of error (MOE) of +/- 4.3 percentage points. The data was weighted based on gender, age, education, region, and based on 2016 turnout model. It is important to remember that subsets based on gender, age, party breakdown, ethnicity and region carry with them higher margins of error, as the sample size is reduced. Data was collected using an Interactive Voice Response (IVR) system of landlines only (n=293) and online panels provided by Dynata and MTurk (n=207). 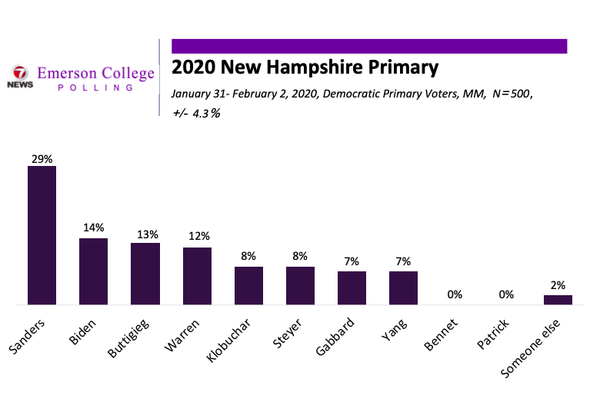 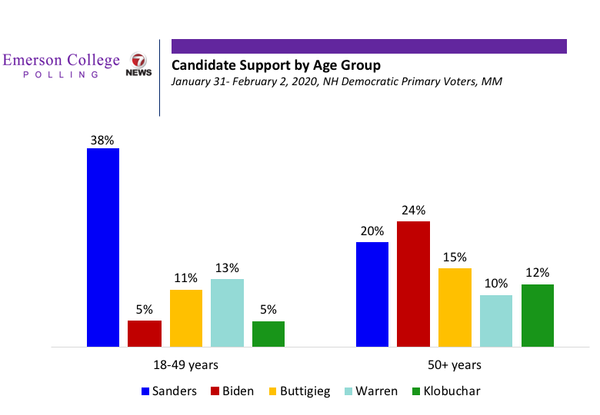