In the “First in the Nation” New Hampshire Primary, the latest Emerson Poll finds the former VP Joe Biden and Sen. Elizabeth Warren in a statistical dead-heat with 24% and 21% of the vote, respectively. Sen. Bernie Sanders, who was leading in the February poll with 27% of the vote is now in third at 13%. Mayor Pete Buttigieg is in fourth at 11% and Sen. Kamala Harris is in fifth with 8%. Congresswoman Tulsi Gabbard, who did not qualify for the third Democratic debate, is at 6% in the Granite state, Sen. Cory Booker is at 4%, Andrew Yang is at 3% along with former Congressman John Delaney, and 3% of voters are still undecided (Sept 6-9, 2019, n=483, +/-4.4%). 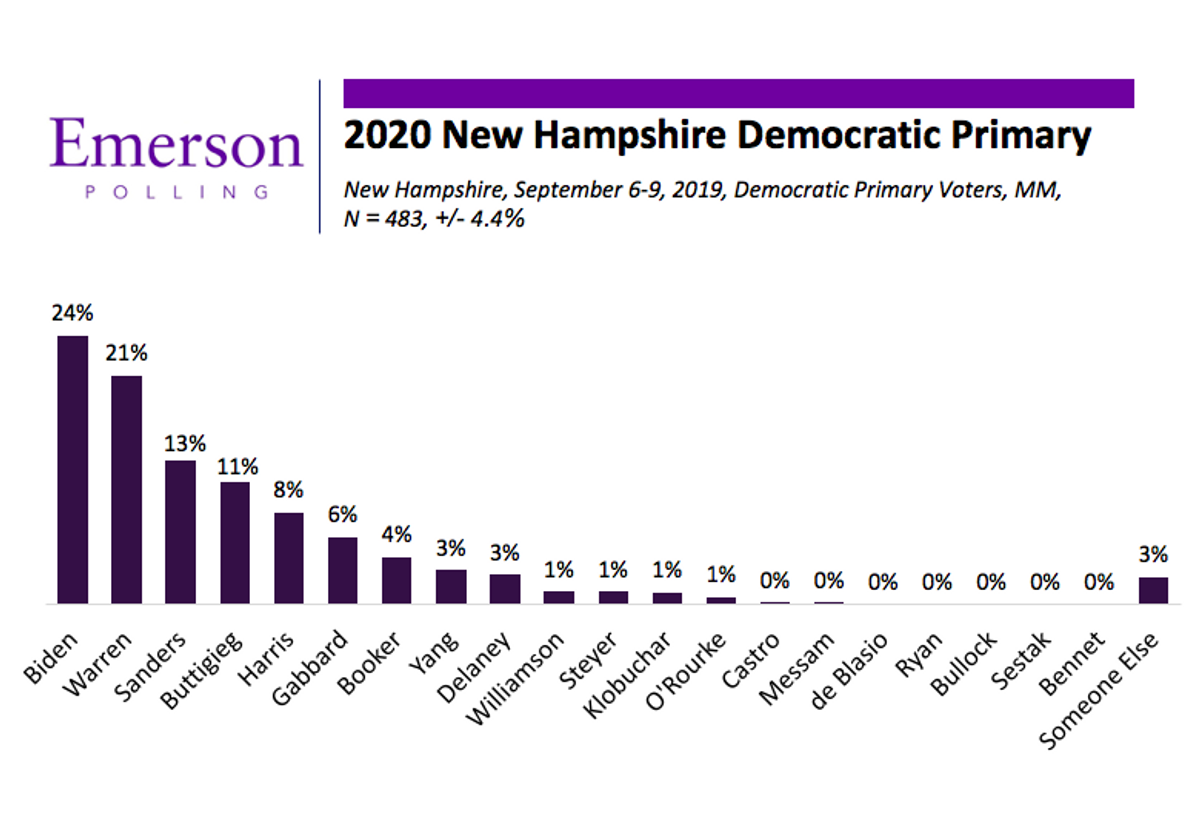 Prof. Spencer Kimball, Director of Emerson Polling, found differing outlooks for Sanders and Warren from this poll: “for Warren, only time will tell whether she is peaking this September or solidifying her base in the state. For Sanders, the question is whether his base of 18-29 year olds is splintering away from him, or if this poll is an outlier.”

Trump’s disapproval among New Hampshire voters is at 53% with 40% approval. This is slightly up from the last Emerson Poll in February which had Trump at 52% disapproval and 43% approval in the state.

Trump continues to be popular within the Republican party, defeating his two potential rivals, former Gov. Bill Weld (MA) and former Rep. Joe Walsh (IL) with 80% support followed by Weld at 13% and Walsh at 7% (n=379, +/-5%)

In hypothetical head-to-head matchups, Trump trails all the Democratic candidates except Warren, where he is ahead at 51% to 49%. Outside of Biden’s 10 point lead, Andrew Yang performed second best with 54% of the vote. Spencer Kimball, director of Emerson Polling said “it is interesting to see Yang outperform his Democratic rivals against Trump. In this case, his lower name recognition may allow voters to idealize his candidacy.” 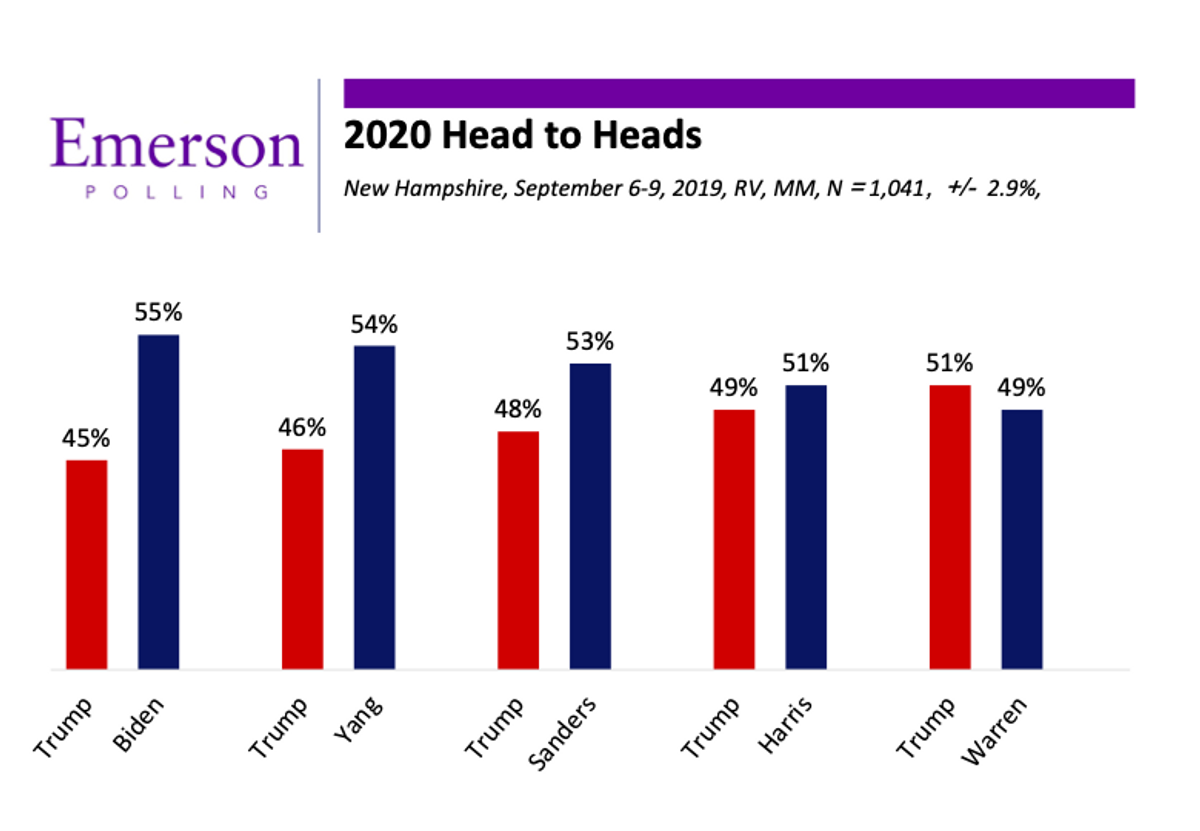 The most important issue for voters in deciding whom they will support for president is the economy at 29%, followed by healthcare at 18%, social issues at 15% and immigration at 11%, the environment at 9%, gun policy at 7% and education at 5%. Impeachment was the least important issue of the eight asked with 3%.

Party affiliation appears to be driving this issue, as Democrats and Independents are more in favor of an independent commission at nearly 2:1 ratio (35% to 17%), while Republicans oppose 2:1, 36% to 18%.

In a potential candidacy for U.S. Senate, former Trump Campaign Manager Corey Lewandowski leads the Republican field with 23% of the vote, followed by Don Bolduc at 9% and Bill O’Brien at 7%. Despite Lewandowski’s support from Trump, 56% of GOP primary voters are undecided at this point.

If Lewandowski gets the Republican nomination, he starts out about 10 points behind Sen. Jeanne Shaheen, 49% to 39%. This lead puts the incumbent Senator in a strong position from the start, as she is near the 50% threshold incumbents seek. In 2014, Shaheen was re-elected against Scott Brown, 52% to 48%. In the Emerson February poll, Shaheen and New Hampshire Governor Chris Sununu were both at 44%, with 12% of the electorate undecided.

The New Hampshire Emerson College poll was conducted September 6-9, 2019 under the Supervision of Emerson Polling Director Assistant Professor Spencer Kimball. The sample consisted of registered voters, n=1,041, with a Credibility Interval (CI) similar to a poll’s margin of error (MOE) of +/- 3 percentage points. The data was weighted by age, education, party, and mode based on 2016 turnout modeling. It is important to remember that subsets based on gender, age, party breakdown, ethnicity and region carry with them higher margins of error, as the sample size is reduced. Data was collected using both an Interactive Voice Response (IVR) system of landlines only (n=692) and an online panel provided by Amazon Turk and Dynata (n=349). 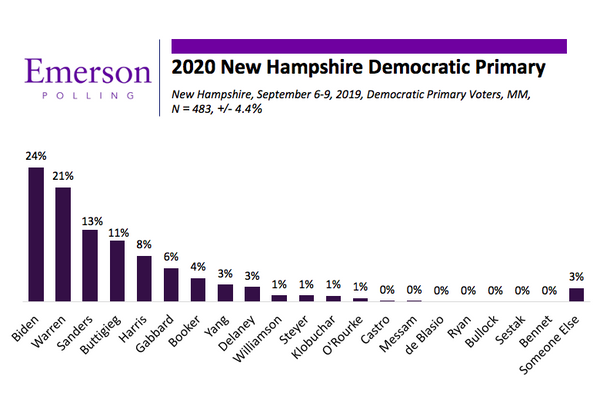 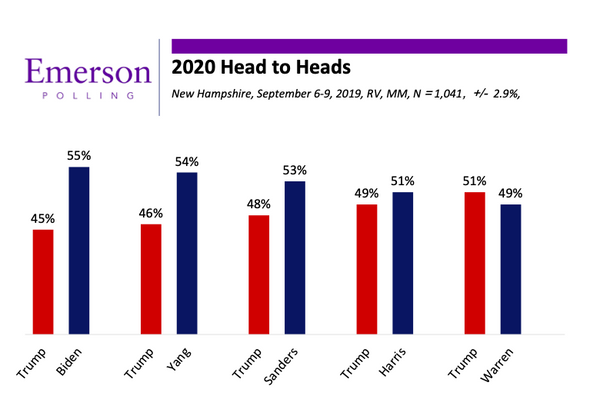