A new WHDH 7 News/Emerson College poll finds a major shake up in the New Hampshire primary with Senator Bernie Sanders leading with 26%, followed by Mayor Pete Buttigieg at 22%. Former Vice President Joe Biden and Senator Elizabeth Warren are at 14%, Rep. Tulsi Gabbard is at 6%, and Entrepreneur Andrew Yang is at 5%. All other candidates are below 5%. (Nov. 22-26, MM, n=549, +/- 4.1%). 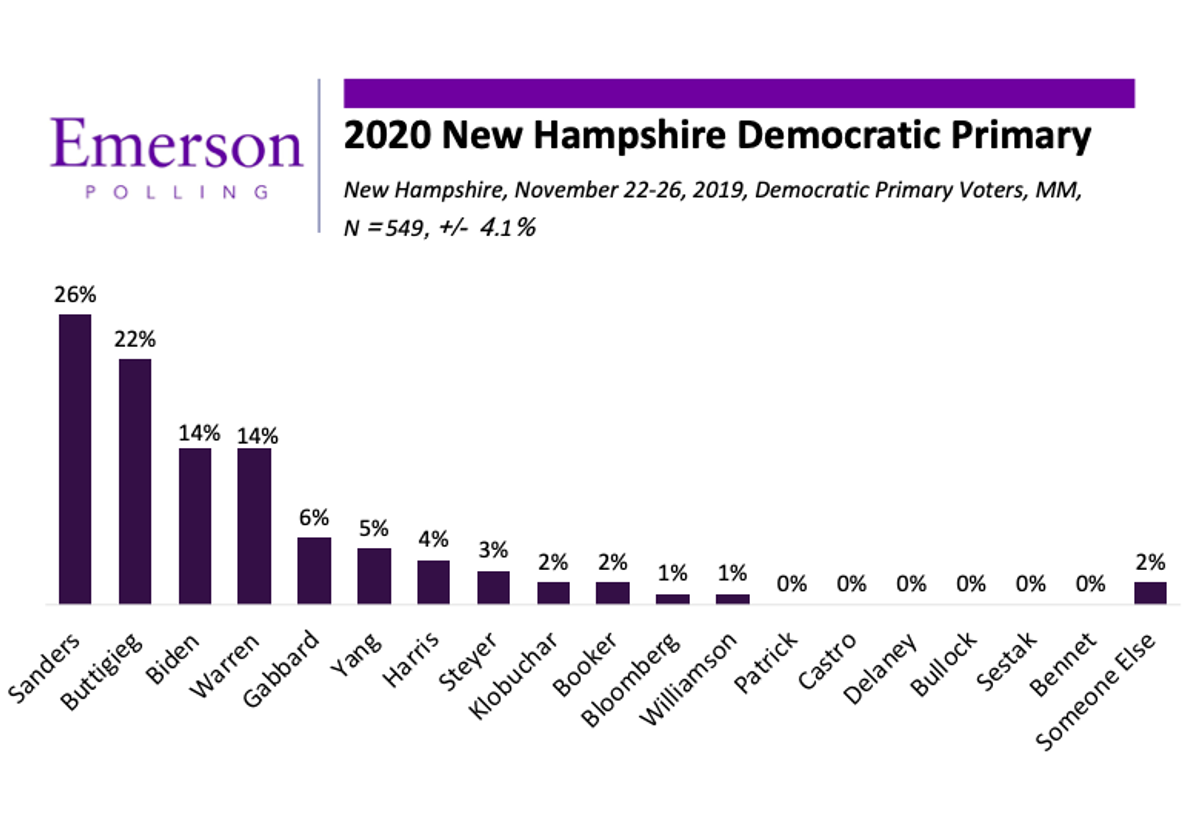 Spencer Kimball, Director of Emerson Polling, said “the Democratic voters have taken a look at Joe Biden and Elizabeth Warren and they appear unsatisfied at this time which brought some voters back to Bernie Sanders while others are now moving to a fresh face in Pete Buttigieg, this demonstrates the fluidity of the race.”

Sanders has retaken a strong lead among those under 50 in New Hampshire, now leading with 38% support among that group. Following him among younger voters is Warren at 16%, Buttigieg at 12% and Biden at 8%. Buttigieg leads with those 50 and over with 32% support, followed by Biden with 19%, Sanders with 15% and Warren with 11%.

When asked if there’s a chance they could change their mind before the primary, a majority (55%) of Democratic primary voters indicate they are open to a different candidate, and 45% are set in their current choice. Sanders supporters are the most committed to their candidate, with 65% saying they will definitely vote for the Vermont Senator. Warren supporters follow, with 47% pledging their vote to her. Buttigieg is next with 40%, and Biden trails behind, with only 36% saying they are committed to him.

Former Massachusetts Governor Deval Patrick and former New York Mayor Michael Bloomberg both registered negligible support in this poll, at 0% and 1% respectively. Coming just a few weeks after their entry, Patrick and Bloomberg’s lack of traction mirrors a seeming reluctance within the Democratic base to consider newer candidates. 71% of Democratic Primary voters said there were too many candidates running, compared to 7% who believed there should be more.

Trump disapproval sits at 53%, unchanged from the last Emerson New Hampshire September poll. The President’s approval has risen from 40% to 42%, and Governor Chris Sununu’s approval sits at 49% statewide. Sununu’s disapproval is at 30%. In the Republican primary, President Trump leads with 84% support in New Hampshire. Former Massachusetts Governor Bill Weld follows with 13% and former Congressman Joe Walsh trails at 3%.

Respondents in the poll were given head to head matchups between President Trump and leading Democratic candidates. Half of those polled were given an undecided option, while the other half of those polled were forced to choose between the two options. In all cases, Trump was within the margin of error against his potential opponents in the general election. Without undecideds, Buttigieg leads Trump by six points, Biden and Sanders lead Trump by four points, and Yang and Warren both trail Trump by two points. With the undecided option included, Sanders leads Trump 49% to 42%, Buttigieg leads Trump 48% to 41%, Warren leads Trump 47% to 43%, and Yang and Biden lead Trump 46% to 42%.

Spencer Kimball, Director of Emerson Polling, said “this data suggests that there might be a shy Trump vote as Trump’s’ numbers improved when the undecided option was not offered. This is something we will continue to monitor as we look at the head to head ballot tests for 2020.” 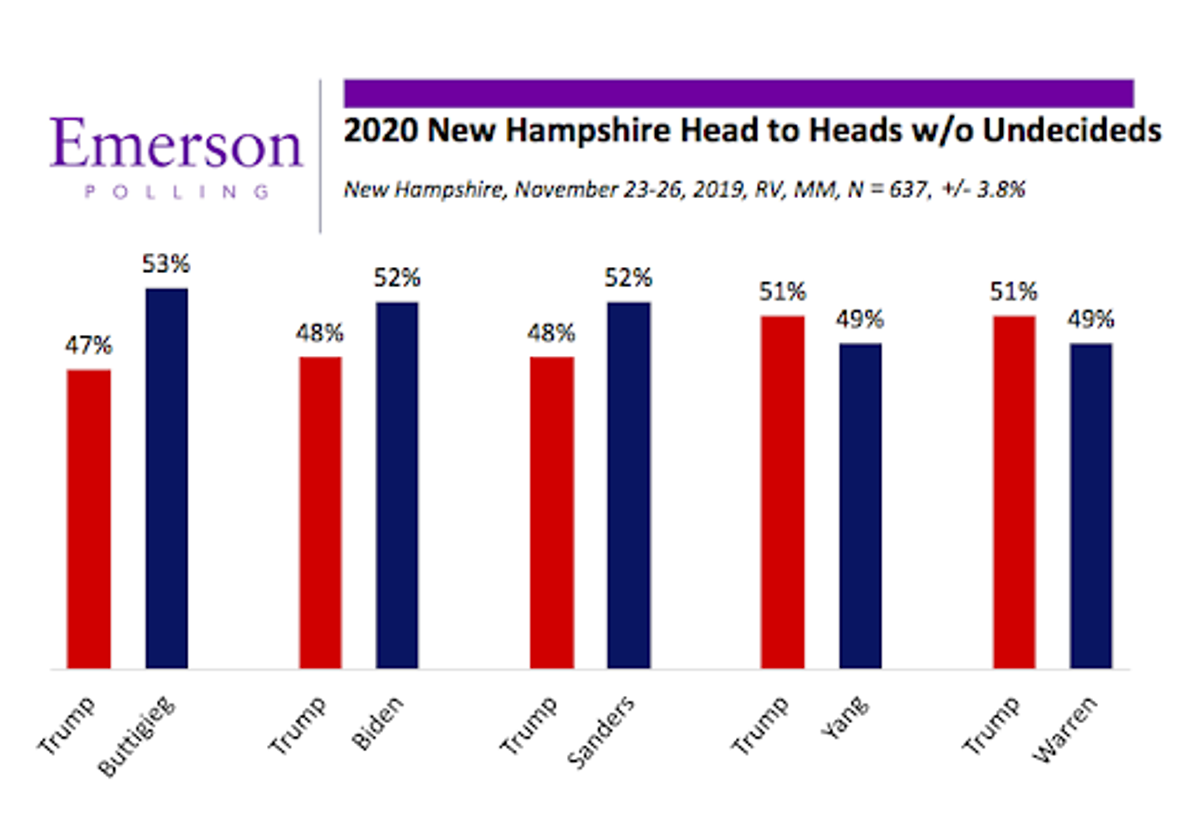 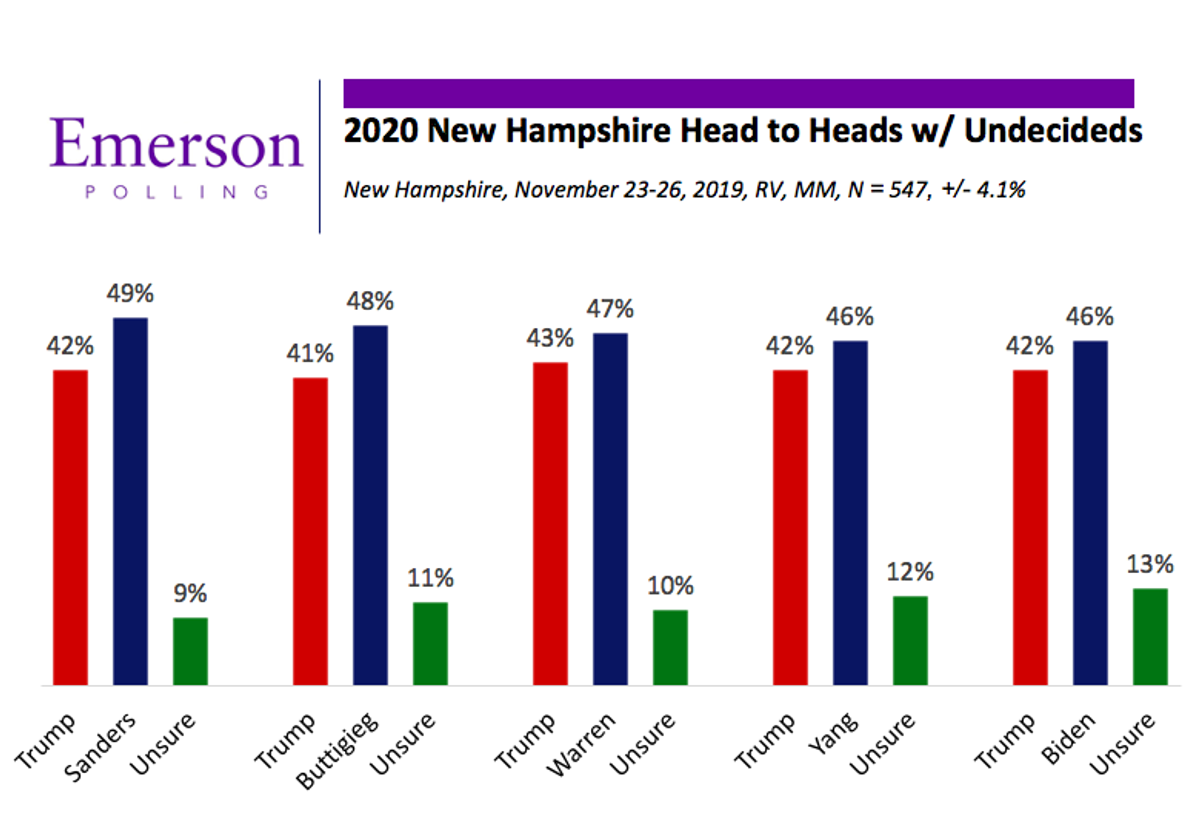 Incumbent Senator Jeanne Shaheen leads potential Republican challenger Corey Lewandowski by a margin of 52% to 40%. Shaheen holds a strong lead among independents in this matchup, leading 54% to 30% among those voters.

A majority of New Hampshire voters (73%) have either been watching or following the impeachment hearings of President Trump, with a higher percentage (47%) of voters supporting impeachment than opposing impeachment (44%). 9% of voters are still unsure on the issue.

When asked if their opinion on whether or not President Trump should be impeached has changed since the start of the hearings - 17% report that their opinion has shifted. Of those who have changed their mind, 64% have moved in support of impeachment, compared to 27% who now oppose impeachment.

For Democratic primary voters, the top issue is healthcare at 23%, followed by the environment at 20%, social issues at 18%, and the economy at 18%. Impeachment was just 5% of the Democratic voters’ top issue, although it has dominated the news this week.

Republican primary voters’ top issue is the economy at 45%, followed by immigration at 16%, healthcare at 10%, and foreign policy and terrorism at 7%. Independents have the economy as their top issue at 32%, ahead of health care at 24%, the environment at 11%, and social issues at 9%.

The New Hampshire Emerson College poll was conducted November 22-26, 2019 under the Supervision of Assistant Professor Spencer Kimball. The sample consisted of registered voters, n=1,184, with a Credibility Interval (CI) similar to a poll’s margin of error (MOE) of +/- 2.8 percentage points. The data was weighted based on 2016 voter model of gender, party, age, ethnicity, and region. It is important to remember that subsets based on gender, age, party breakdown, ethnicity and region carry with them higher margins of error, as the sample size is reduced. Data was collected using both an Interactive Voice Response (IVR) system of landlines only (n=780) and an online panel provided by Amazon Turk (n=141) and Dynata (n=263). 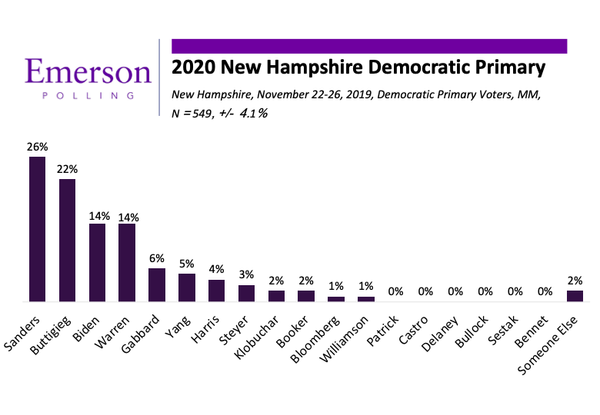 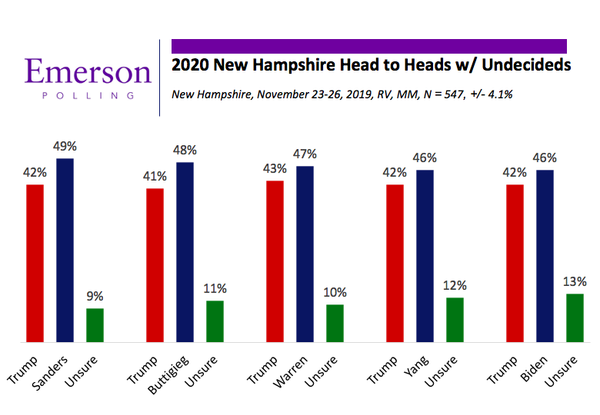 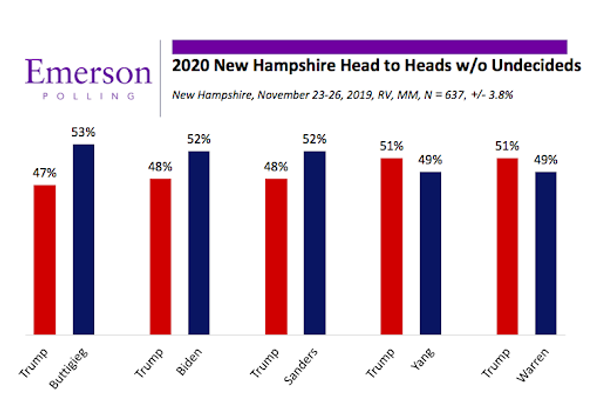