A new 7 News/Emerson College Poll of New Hampshire Democratic primary voters finds Sen. Bernie Sanders maintaining his lead with 23% of the vote, followed by former Mayor Pete Buttigieg at 18%, former V.P. Joe Biden and Sen. Elizabeth Warren at 14% each and Minnesota Sen. Amy Klobuchar at 10%. Entrepreneur Andrew Yang is at 6%, Rep. Tulsi Gabbard is at 5% and Businessman Tom Steyer is at 4%. All other candidates are below 3%. The data was collected January 13-16, 2020, MM, Democratic primary voters, n=657, +/- 3.8%. 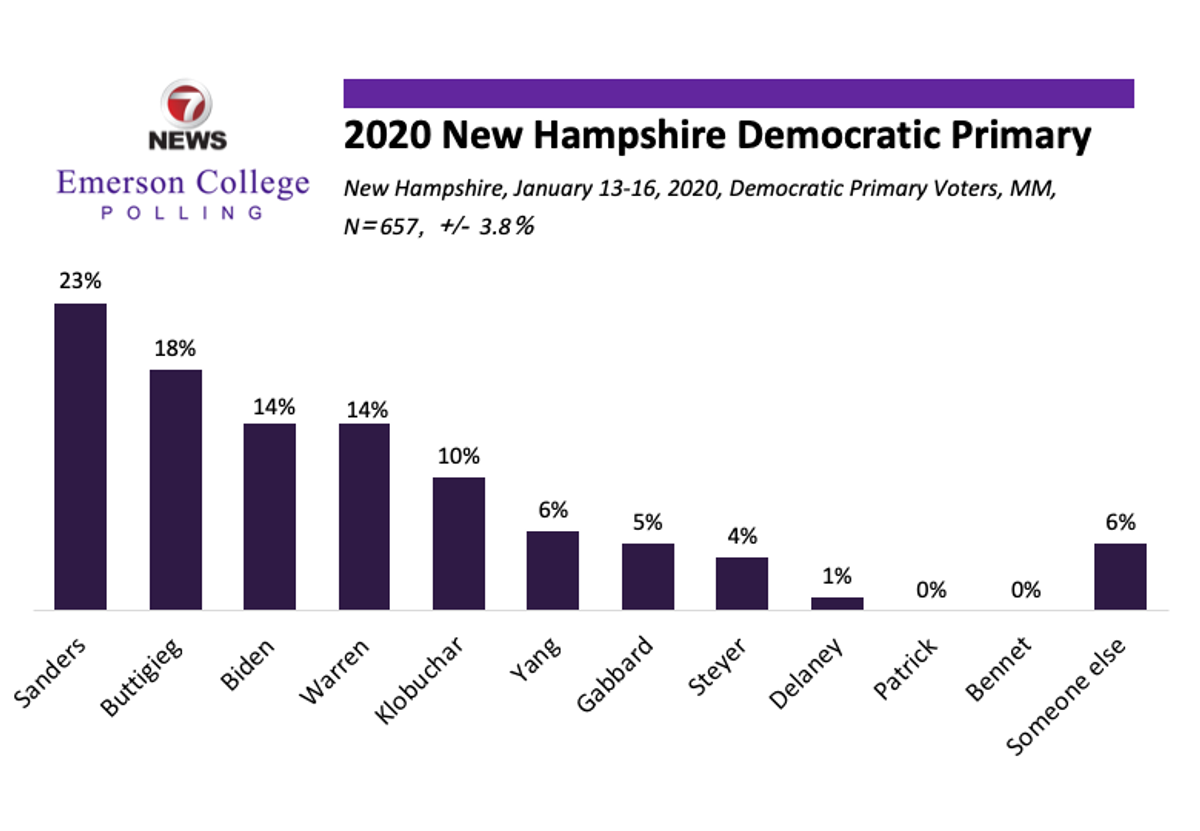 Spencer Kimball, Director of Emerson College Polling, points out that “there was not much movement among the top four candidates in the last month, but Senator Amy Klobuchar jumped 8 points and is a competitor in New Hampshire.”

Sanders continues to lead with younger voters, garnering 28% support among voters under the age of 50. Buttigieg and Warren follow him in that group with support at 15%, Yang at 10%, Klobuchar at 8% and Biden at 7%. Conversely, among voters age 50 and over, Biden leads with 21% support, followed by Buttigieg with 20%, Sanders with 18%, and Warren and Klobuchar with 12%.

Regardless of who they intend to vote for in New Hampshire’s primary, voters were asked which candidate they believe is the most likely to receive the nomination at July’s convention. Despite coming in third in this poll, Joe Biden easily leads as the expected nominee at 44%, followed by 20% who expect Sanders as the nominee. 10% believe Buttigieg will get the nomination, and 9% say Warren.

Spencer Kimball, Director of Emerson College Polling, said “while Bernie Sanders remains in the lead in New Hampshire, it appears his supporters are doubting that he will be the actual nominee with only 49% expecting him to win the nomination. On the flip side, Joe Biden supporters are confident, with 87% thinking he will be the nominee.”

Voters were also asked which candidate they thought had the best plan or approach to several different important issues. 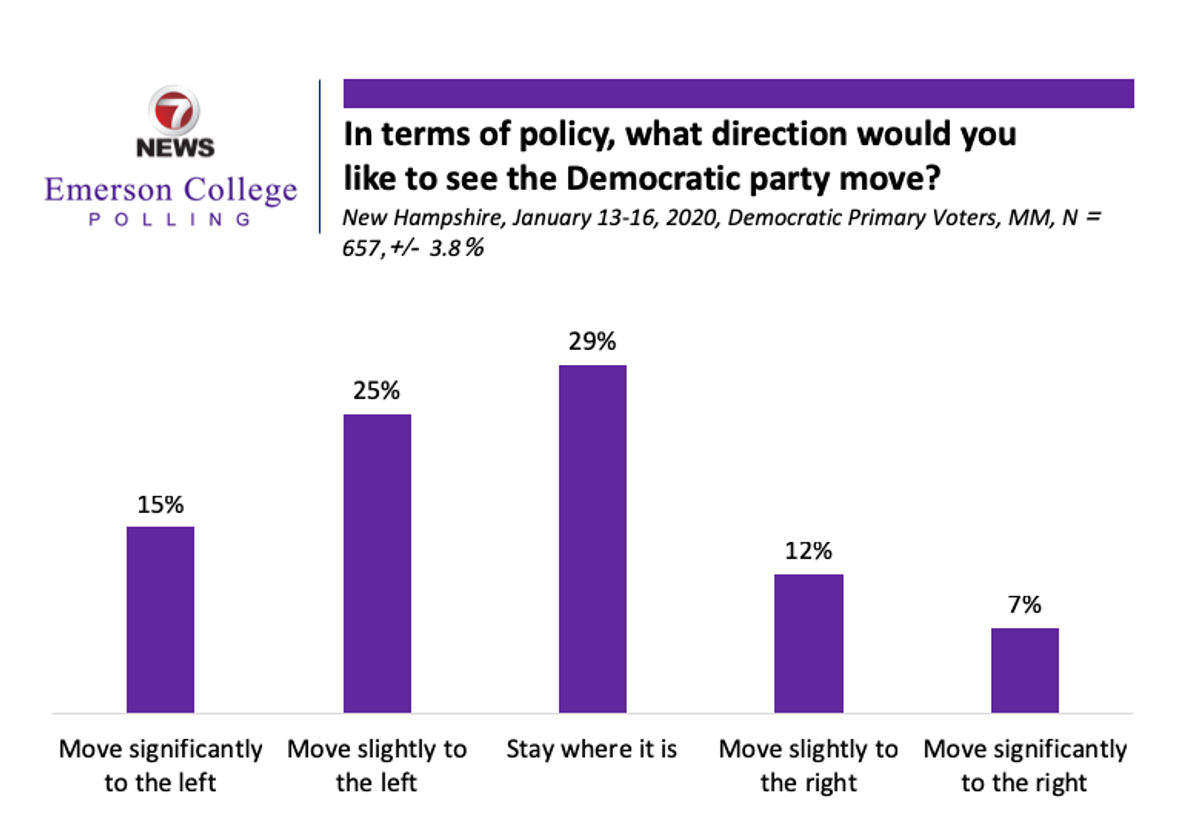 Democratic voters in New Hampshire are also strongly in support of the Senate removing President Trump from office with 77% saying he should be removed and 23% saying that he should not be removed. In addition, 66% of Democratic primary voters have confidence in the way that Democratic leaders are handling impeachment.

The New Hampshire Emerson College poll was conducted January 13-16, 2020 under the Supervision of Assistant Professor Spencer Kimball. The sample consisted of registered voters, n=657, with a Credibility Interval (CI) similar to a poll’s margin of error (MOE) of +/- 3.8 percentage points. The data was weighted based on 2016 voter model of age, gender, and education. It is important to remember that subsets based on gender, age, party breakdown, ethnicity and region carry with them higher margins of error, as the sample size is reduced. Data was collected using both an Interactive Voice Response (IVR) system of landlines only (n=443) and an online panel provided by Dynata and MTurk (n=214). 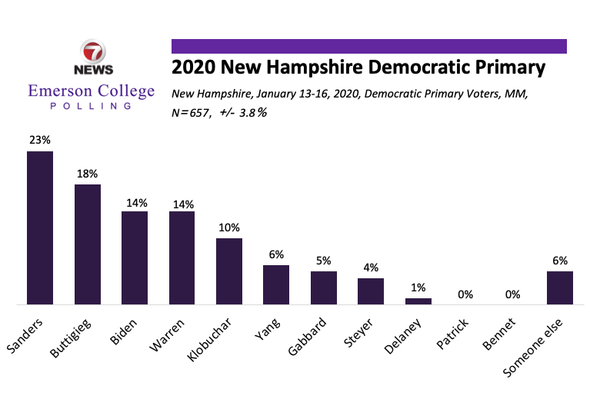 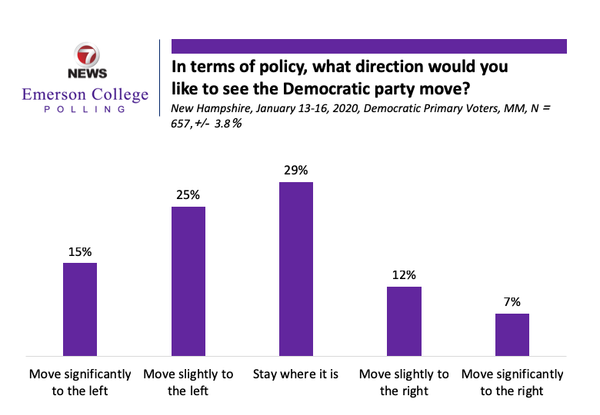