A new Emerson College/8 News Now Poll of Nevada Democratic Caucus voters finds Vermont Sen. Bernie Sanders leading the field by 13 points with 30% support. Former South Bend Mayor Pete Buttigieg is at 17%, which is a virtual dead heat with former VP Joe Biden who is at 16%. Massachusetts Sen. Elizabeth Warren is at 12%, Minnesota Sen. Amy Klobuchar is at 11%, Businessman Tom Steyer is at 10% and Hawaii Rep. Tulsi Gabbard is at 2%. 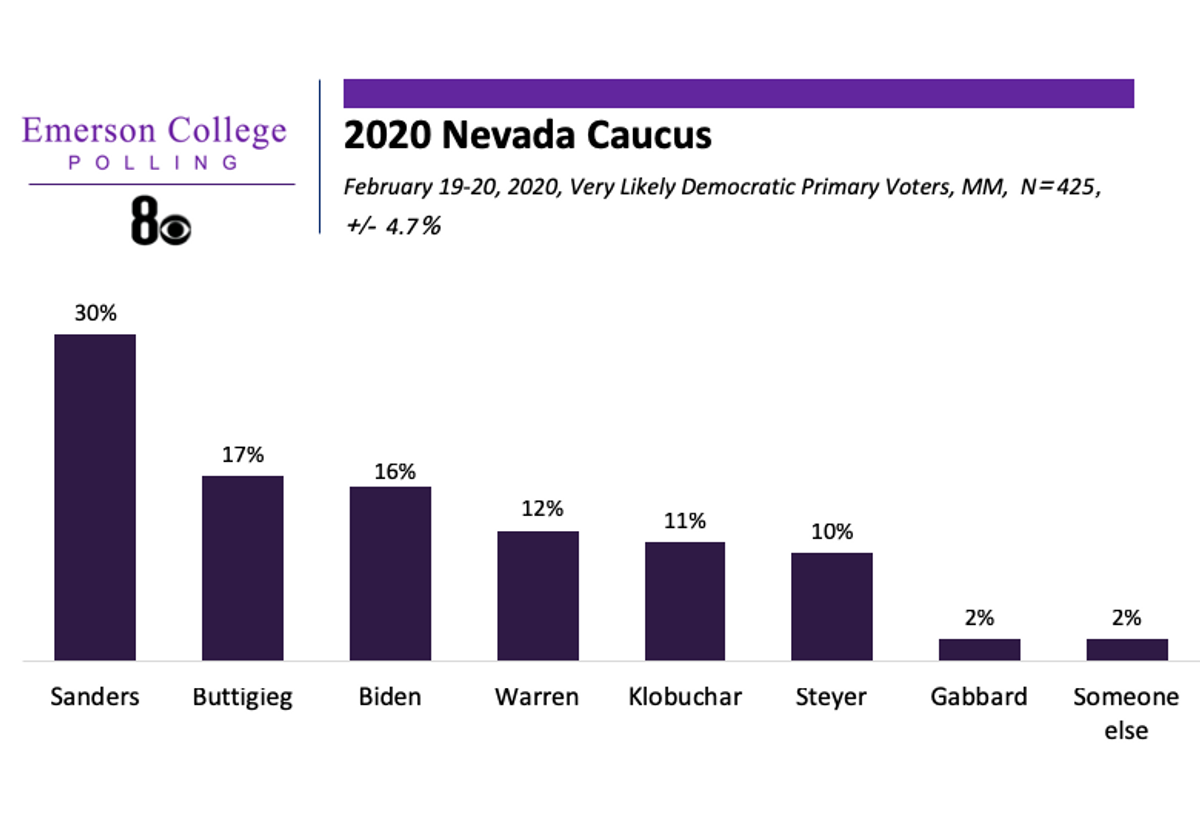 Since the last Emerson College poll of Nevada in early November, Sanders has gained 11 points, Buttigieg has moved up 12 points, Biden is down 14 points, Warren fell 10 points. Klobuchar and Steyer both moved into double digits, gaining 10 and 7 points respectively. 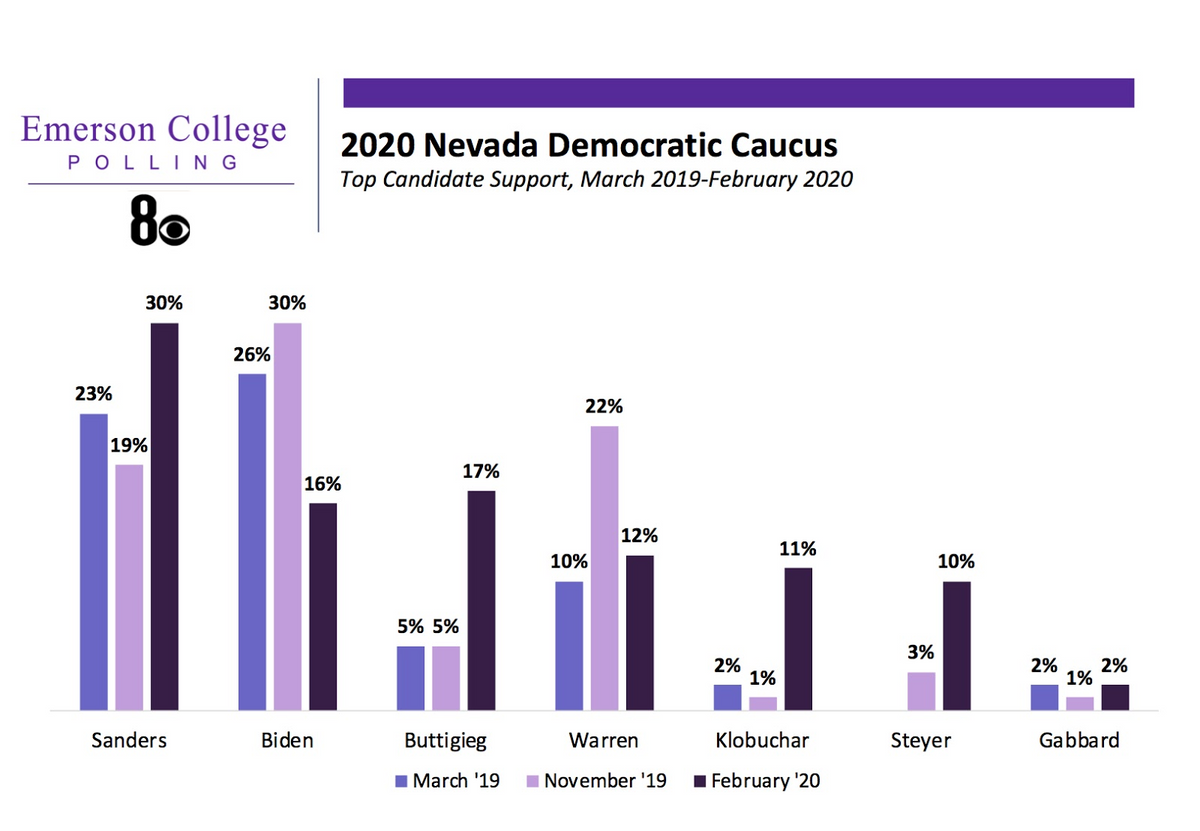 The key to Sanders lead appears to be his popularity among younger voters. He has a majority of support from voters under 50 with 50%. Next among those voters is Buttigieg at 11%, followed by Steyer, Klobuchar and Warren at 10%. Among voters 50 and over, Biden leads with 24% support, followed by Buttigieg at 22%, Sanders at 16%, Warren at 14%, and Klobuchar at 12%.

A strong majority of respondents (75%), are in favor of an amendment to the Nevada state constitution that would recognize marriage as between couples regardless of gender. Just 12% oppose that amendment and 13% are neutral.

When it comes to the most important issue while deciding for whom they will for president, health care was the most popular choice at 28%, followed by the environment at 24%, and then the economy at 20%.

The Nevada Emerson College/ 8 News Now poll was conducted February 19-February 20, 2020. The sample for the Democratic Caucus consisted of registered Democratic, Independent and Republican likely voters, n=425, with a Credibility Interval (CI) similar to a poll’s margin of error (MOE) of +/- 4.7 percentage points. The data sets were weighted based on gender, age, ethnicity, party, education, region, and based on 2016 turnout model. It is important to remember that subsets based on gender, age, party breakdown, ethnicity and region carry with them higher margins of error, as the sample size is reduced. Data was collected using an Interactive Voice Response (IVR) system of landlines only (n=224), cell phones (n=140) and online panels provided by MTurk (n=60). 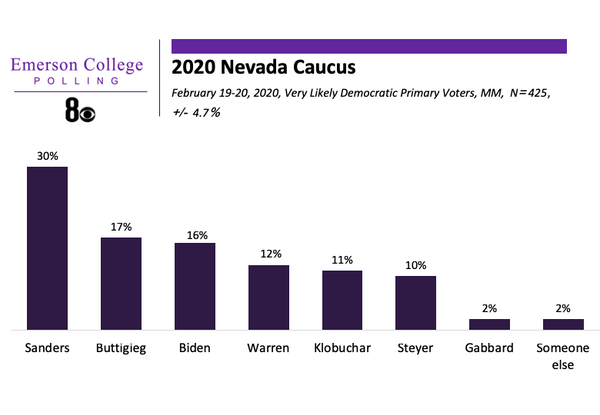 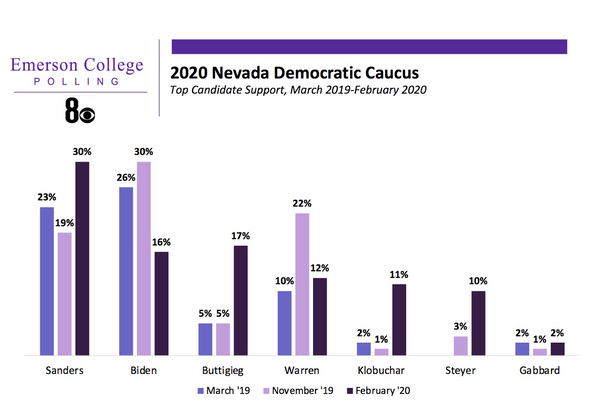